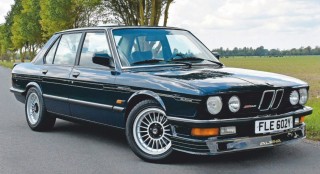 Thinking of an E28 M5 but put off by the ever-escalating cost of entry? How about something rarer, slightly cheaper and, some say, even more visually pleasing? Welcome to this Alpina B9 3.5, number 166 of just 577 built, and one of only a handful known to be in the UK. Unlike a lot of Alpinas, this one's blessed with a dogleg manual gearbox. The paintwork is original, but despite its 36 years it presents well, if not quite to concours levels. There are swirl marks and minor scuffs and surface scratches, but only two areas are in need of immediate rectifation – chipped paint on the passenger-side bootlid and a down-to-the-metal stonechip on the bonnet. These will be sorted by the vendor prior to the sale if the prospective buyer wishes it. The alloy wheels are in largely fantastic condition, though there is a minor chip on one of the spokes of the driver's side rear.

Each wheel wears a Bridgestone Rego tyre, all of which have plenty of tread remaining. On the inside, the stunning cloth bucket seats look and feel amazing, though the plastic Alpina tags on the seat have snapped. That's the only blemish on the seats. The dashboard/control interfaces are immaculate. The headlining is a bit grubby and some discolouration of the leather hide indicates water ingress around the rear windows at some point. This will all be attended to by the vendor before the car is sold, and we're pretty sure the leak is gone – the interior was free from mustiness and fresh rubber is present and correct around the rear screen. This car was imported here in 2017 by its sole UK owner, at which point he spent £2953 on recomissioning. That included work on the ECU, air-flow meter, ignition coil, various sensors, UK wiring loom and Bilstein dampers. The original build sheet and sales invoice is included with the paperwork. On the road, the pull from that infamous BMW straight six has lost none of its appeal. Get it high into the rev counter and it's a proper screamer. The handling is direct and the braking much more instantaneous than you'd imagine from a 1980s BMW. We experienced no odd rattles or vibrations through the steering, pedals and drivetrain.

With recent auction results showing more interest in 1980s Alpinas, this is a rare-groove car that's only going to appreciate. With the issues sorted, it'll be a genuine concours hero.

Policy £190, with £400 excess. Free legal cover and agreed value available. Quote based on a 39-year-old self-employed male, no points on his licence, living in Peterborough. Car is garaged, 3000 miles per year and with comprehensive cover. Call 0800 085 5000 for your quote.