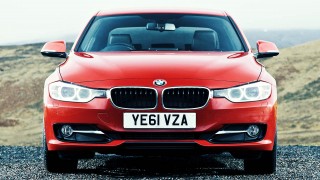 How about trying the F30 320d for size – it’s a great car. The current 320d had been around for getting on for four years now and that means that depreciation has taken its toll, making it an excellent used buy Words: Bob Harper. Photography: BMW.

Launched at the beginning of 2012 the new 3 Series was bigger than its predecessor, offering more interior and luggage space, had options not seen before on a 3 Series and a new look that’s aged well – so much so that the LCI face-lift changes have been so minor as to be almost indistinguishable! The 320d packed 184hp and 280lb ft from the four-cylinder diesel and this meant it was good for 146mph with a 0-62mph time of 7.5 seconds for the manual and 7.6 seconds for the eight-speed automatic example. Emissions were commendably low at 120g/km for the manual and 118 for the auto while economy was just over the 60mpg mark for both manual and auto.

There was also the 320d EfficientDynamics model which had the same torque as the 320d but was down on power at 163hp which gave a slower 0-62mph time of 8.0 seconds. For the first time the model could be ordered with the eight-speed auto as well as the manual ‘box and they had identical economy and emissions figures of 68.9mpg and 109g/km respectively.

For the regular 320d you also had the choice of SE, Sport, Luxury, Modern or M Sport trim levels and the Sport was very popular with buyers. Familiarise yourself with each trim level as they can have a huge effect on the car’s ambiance.

Not too much fortunately. We should mention that this model is still fitted with the N47 diesel engine with its notorious cam chain located at the rear of the engine which gave a lot of trouble in the 1 Series and 3 Series. By the time it was fitted to the F30 it had been modified but there are still the occasional instances of a chain becoming overly vocal. Listen carefully to the engine and if you’re unsure walk away, or equip yourself with a cast iron warranty. Just about the only other major issue is a fault with the steering which can give an annoying rattle or knock over rough surfaces and can sometimes be felt as a vibration at higher speeds. The cure is a replacement steering rack so if the car you’re looking at isn’t under warranty look for this on a test drive. Other than that it’s a case of checking interior trim for fit and finish (seat bases can rust and some leather trims have been known to come loose). Also have a listen for rattling windows which can generally be cured with some lubrication.

The F30 is, quite simply, a brilliant drive and it’s wrapped up in a package that can offer just about anything to everyone. The pick of the F30 range has to be the ubiquitous 320d. No, it won’t be exclusive, but there’s a reason why there are so many on the road – they’re very, very good. Despite ‘only’ having a four-pot diesel mill the 320d offers a remarkable turn of speed when you’re in the mood yet can also be remarkably parsimonious when you’re taking it easy. And with so many different trim finishes available and so many options to choose from you really should be able to find one that perfectly suits you. The best news is that with the first lot of ex-lease cars having come on to the market there are loads to choose from and you should be able to strike a hard bargain.

The 320d shouldn’t cost a fortune to run provided you don’t run into any unscheduled repairs. Road tax is cheap – just £20 per annum for a 320d ED and £30 for all other 320ds – and so long as you don’t drive everywhere like your pants are on fire 50mpg should be achievable. Some owners report 70mpg on a run with a 320d ED but you’ll have to have a pretty low average speed to achieve this. Rear brake pads can wear out prematurely if you have a heavy right foot as the DSC system will use the rear brakes to prevent a rear wheel from spinning but even then costs aren’t ruinous with BMW’s menu pricing indicating a cost of around £175 fitted. Front pads will be just over £200 while an oil service costs approximately £130. Change the microfilter, fuel filter and air filter at the same time as the oil service and the total bill will come to around £350.

You can bag an F30 320d for just under £10k, but we’d reckon on spending more than that as it will give you a greater choice of cars and options. 320ds are popular in the main dealer used network and prices start at around £13,500 and taking this route gives you the peace of mind of having at least a year’s Approved Used Warranty. That £13.5k model was an ED with 75k miles, but up the budget to £15k and you could have either a Sport, Modern or Luxury model. If you have your heart set on an M Sport the bad news is that at main dealers prices start at £18k, demonstrating the power and popularity of M.

Overall the F30 320d is a great buy. We’d urge you to look at the Luxury model as a used buy as you do tend to get plenty of nice options on these cars, even if the wood trim and chrome exterior highlights might not be to all tastes. The Sport models probably offer the best value for money, but have a look at quite a few as prices do vary a bit. Also some cars can be bagged with useful options without having to spend significantly more.

Figures in brackets for automatic transmission