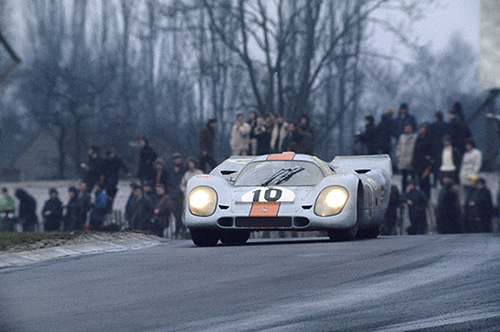 Peering through the spray, Alain de Cadenet saw first-hand the genius of Mexican rainmaster Pedro Rodriguez. It’s a performance that he’ll never forget. On the subject of heroes and heroic performances, nothing is more enlightening than witnessing such deeds oneself. Apart from the actual driving in a race, one of the perks of taking part in a serious event is to get a free lesson from the ‘big deal’ drivers in factory cars. Never more so than when it’s wet. Very wet.

The 1970 BOAC 1000kms at Brands Hatch on 12 April produced a drive from one of the winners that all but caused pandemonium. Not just among the spectators, but with the organisers, too. The exceptional Pedro Rodriguez had blasted off the line in his Gulf Racing Porsche 917 and tucked in behind Vic Elford, who was in a factory-run similar car. I was a few rows back in a 908 and couldn’t see the rear of the car in front. The leaders threw up so much water and vapour that I was drenched in seconds. There was an early accident that put out Barrie Smith in his Lola T70 and caused the yellow flags to go out. Not that anyone could see them – pre-lights then, of course – and Pedro managed to pass a couple of cars under the flags.

Nick Syrett, boss of the BRSCC and clerk of the course, had Pedro black-flagged and obligingly he came into the pits. He was not a happy man and, after a short, unheard ticking off, he roared out totally sideways and got it straightened up in time for Paddock bend. By that time he’d dropped to 12th. What ensued was a masterclass in how to throw a 600bhp lightweight racing car around a fast and slippery track in appalling conditions, with vehicular carnage getting in your way all around the circuit. It was a flabbergasting experience to have the maestro come by me, working Stuttgart’s rack and pinion as if it were a destruction test. In that car, on that track, in that weather, it was Pedro’s day. He lived with the gods, and I came away thanking my God that I was only an amateur and accordingly not remotely expected to keep up.

Co-driver Leo Kinnunen, who was as quick as anyone in the dry, hardly sat in the car and at the end of the race they won by five laps from Elford. Pedro was the wrong man to get riled. He’d been a Mexican motorcycle champion at the age of 15 and racing cars internationally at 18. When his talented younger brother, Ricardo, was killed in practice for the 1962 Mexican GP, he wanted to give up altogether. The established rivalry between him and Jo Siffert produced some staggering performances from them both. Banging into each other in 917s on the opening lap of the 1970 Spa 1000kms, for instance, and Rodriguez winning the 1970 Belgian GP in a BRM.

Pedro was an out-and-out racer. He lived for the sport and rigorously made the most of his off-track life, too. He always looked immaculate, even after a race. I don’t know how he managed that, but have a look at some photos of him wearing his deerstalker hat: beyond dapper.

Ultimately, the sport killed him. It was in July 1971 at the Norisring 200, in his chum Herbie Muller’s Ferrari 512M. Chris Craft won in my McLaren M8E, and said that Pedro was giving it plenty. Some asked why a current GP and Gulf man was bothering to race there. To me it’s obvious: he was doing what he loved. It was a very sad day indeed, and a measure of just how dangerous racing could get.

In my book, anyone who could take the old SpaMasta Kink flat in a 917, 512 or F1 car was a hero. To leave the lap record at 160.513mph was a Herculean feat of bravery, good luck and skill that is given to few. Very few. Just ask Redman, Bell, Oliver, Attwood, Elford or Ickx. Witnessing these men in combat was always a treat for me. No racer, before or since, could fail to have felt proud of Pedro that day at Brands.

Pedro demonstrates the flat-out style that made him synonymous with the 917, en route to dominant victory at Brands in 1970.