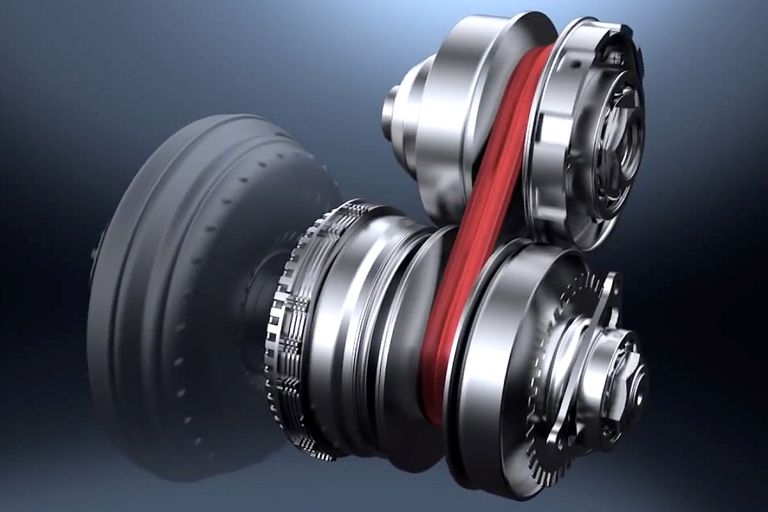 ALL YOU NEED TO KNOW… CVT TRANSMISSION

As this issue of Classics Monthly features a brief history of DAF and the company’s Variomatic geared cars, an look at how this innovative type of gearless transmission works will hopefully illustrate just how advanced the engineering for these interesting little Dutch built cars was for the time. Although Hub van Doorne, one of the original founders of DAF, developed the variable transmission that went into the 1958 introduced DAF 600 the principle for a stepless transmission can be traced back the late 15th Century and Leonardo di Vinci. As far as we can discover, di Vinci’s idea was only one of his many futuristic concepts and the credit for developing the first operative variable speed transmission goes to Milton Reeves, who produced a version to power his sawmill in the late 19th century. Reeves also went on to fit his transmission system into a car and Daimler Benz took out the first European patent for an automotive friction based variable speed belt transmission in 1886.

Several vehicle manufactures would go on to employ a simple stepless transmission to change gear ratios and by the end of the first decade of the 20th century, Zenith Motorcycles were producing a twin-cylinder powered machine equipped with what the company described as the Gradua-Gear system. A pulley based constantly variablestyle transmission proved ideal for motorcycles and a much-improved set-up was used by Rudge-Whitworth in 1912 on its Rudge Multigear.

During the interwar years several now long defunct UK and European vehicle manufactures, including Wolverhamptonbased Cyclo and David of Spain produced small cars incorporating a basic variable speed transmissions to transfer power from the engine to the road wheels. The next big development in what would become known as Variable Diameter Pulley (or Reeves) drive took place at the end of the ‘Forties. By the start of the following decade Charles H. Denver had filed patents in the US for a newly developed variable speed automotive transmission system featuring an infinitive number of ratios.

Denver’s invention used steel balls aligned by centrifugal force to alter the position of one side of a constantly adjusting cone in which a reinforced V-shaped rubber belt ran. As engine speed increased and decreased, centrifugal force constantly altered the gap between the two sides of the pulley. This caused the belt transferring power to the wheels to either speed up or slow down according to how high or low the belt was riding inside the adjustable pulleys.

This is obviously an over simplified explanation of how early CVT systems worked but the set up obviously showed promise and was further developed in the mid-‘Fifties in the Netherlands by DAF founder Hub Van Doorne. The DAF 600 was the first car to utilise Van Doorne’s new fangled transmission and the company marketed the car’s highly advanced clutchless ‘gearbox’ as the Variomatic.

The 600 was the first mass produced car since the ‘Twenties to utilise a constantly changing transmission and power for this diminutive little two-door saloon was produced by a 590cc flat twin-cylinder, air-cooled engine. In the case of the 600 and in a lot of the company’s later models, DAF’s Variomatic transmission featured two sets of pulleys fitted with moveable conical drums driving each rear wheel via a rubber belt. In DAF’s case, vacuum from the engine and centrifugal weights inside the primary and secondary drums (or pulleys) caused the ratios to change up and down continuously according to how fast or slow the engine was running. When asked how many gears a DAF 600 had, a light-hearted and very confusing answer many owners still quip is ‘how long is a piece of string?’

This rather glib answer translates into ‘infinite’, as when the diameter of the cone shaped pulleys on the engine side of the CVT unit are fully open and the ones on the wheel side are at their narrowest, the transmission is set in high ratio and provides enough torque to get the car off the line. Once on the move, the diameter of the pulleys on the engine side reduces in width and the cones driving the wheels expand, putting the transmission automatically into a correctly ‘geared’ ratio to maintain the desired speed.

As DAF’s Variomatic transmission consists of a variable pulley driving each rear wheel, this arrangement produced a very simple form of self-locking traction control. When one wheel lost adhesion, the opposite one would grip and propel the car forwards or backwards ­according to the position of the gear selector. One entertaining, or rather dangerous quirk, depending on your point of view, was how a DAF Variomatic is able to travel in reverse as fast as it can go in forward gear. This was quite an alarming feature for the uninitiated and one that many young drivers put to the test in pub car parks and lived to tell the tale.

Driving a Variomatic required a totally different approach when compared to a conventional clutch and manually operated gearbox. I remember driving a little white DAF Daffodil belonging to a distant relative back in the mid-‘Seventies and the knack to get the car going was accelerate then back off to allow the belt drive to eventually catch up with the engine speed. Rev too hard and it would be all noise and not much go until the transmission caught up. Although it took a while to learn how to get the best out this very different form of automatic transmission, reversing a DAF Variomatic went on to become a competitive spectator sport and even inspired an annually held driving backwards world championship in the Netherlands.

DAF continued to develop its Variomatic CVT system right up until the company was taken over by Volvo in the mid- ’Seventies. By then the early rubber belted Variomatic system had given away to a more sophisticated unit featuring clutch controlled adjustable cones, or pulleys, to aid low speed driving and help improve economy. Although Volvo used a much-improved version of DAF’s CVT on the automatic 340, later improvements resulted with the car being offered with a conventional planetary geared auto ‘box instead.

With the demise of the CVT equipped Volvo 340; variable pulley transmissions were limited to small motorbikes, snowmobiles and farm machinery rather than cars for a short while. As carmakers started to look at producing more fuel-efficient vehicles, an upgraded version of Van Doorne’s ‘gearless’ transmission provided an economical method of seamlessly transferring engine power to the road wheels.

One of the first utility vehicles to utilise the new breed of steel belted variable transmissions was the 1987 introduced Subaru Justy. The big difference was that this new breed of CVT was now electronically controlled and later that year Ford introduced the CTX equipped Fiesta, while Fiat unveiled a similarly equipped version of the new Uno. Other manufacturers quickly followed suit and more complex steel belted versions of Van Doorn’s original CVT systems quickly went mainstream with Nissan bringing out the N-CVT and in 1995 Honda introduced its own version, the Multi Matic for automatic versions of the Civic.

Toyota marketed their CVT system as the Multi Drive and in 2000 Audi offered a chain-driven Multitronic CVT as an option on the A4 and A6. BMW offered a CVT manufactured by ZF Friedrichshafen on certain models (also used on the MG ZS and Rover 45) and from 2004 Mercedes-Benz offered entry-level A Class saloon equipped with its Autotronic CVT. One of the big differences between the earlier Variomatic transmissions pioneered by DAF was that these later systems employed steel belts and were generally electronically controlled to provide a ‘stepped’ multiple gearchange rather than a constantly variable set of ratios as in the Daffodil.

OTHER TYPES OF CVT

Deviations from the original Van Doorne design include a Toroidal drive that uses dish-shaped discs and rollers in place of pulleys. In a Toroidal or Estroid transmission, power from the engine is transmitted through one disc acting as the input, while another disc acts as the output. A series of rollers transmits power between the two conically profiled discs and different ratios are ‘selected’ as the rollers, which sit and 90° to the input and output discs, tilt in and out while tracing the spinning disc’s profile.

This type of CVT transmission is very often combined with a set of planetary gears and clutches and is more commonly known as a hydromechanical transmission. Hydrostatic CVT is usually found on tractors and heavy plant and this hybrid system transfers power to the wheels in three stages. Low speed is transmitted hydraulically, high speed is mechanical and intermittent speeds are a combination of the two.

Technically sophisticated Continuously Variable Transmissions are becoming more popular and modern systems claim several advantages that make this form of drive appealing both to car owners as well as environmentalists. One of the main benefits is how CVT works to keep the car at an optimum power range regardless of speed. This helps to save fuel and eliminates ‘gear hunting’ where a conventional hydraulically operated automatic often changes up and down while tackling an incline and wastes fuel in the process.

Although advances in technology have produced Continually Variable Transmissions controlled by paddles on the steering column, the principal in many systems is still very similar to those that Van Doorn’s included in the Variomatic equipped DAF 600 back in 1958. Sixty years is a long time in automotive engineering and CVT is definitely the ‘come back kid’ and it will be interesting to see how this innovative technology is utilised once electric power eventually takes over from the faithful internal combustion engine.

4 Control mechanism for forward and reverse;