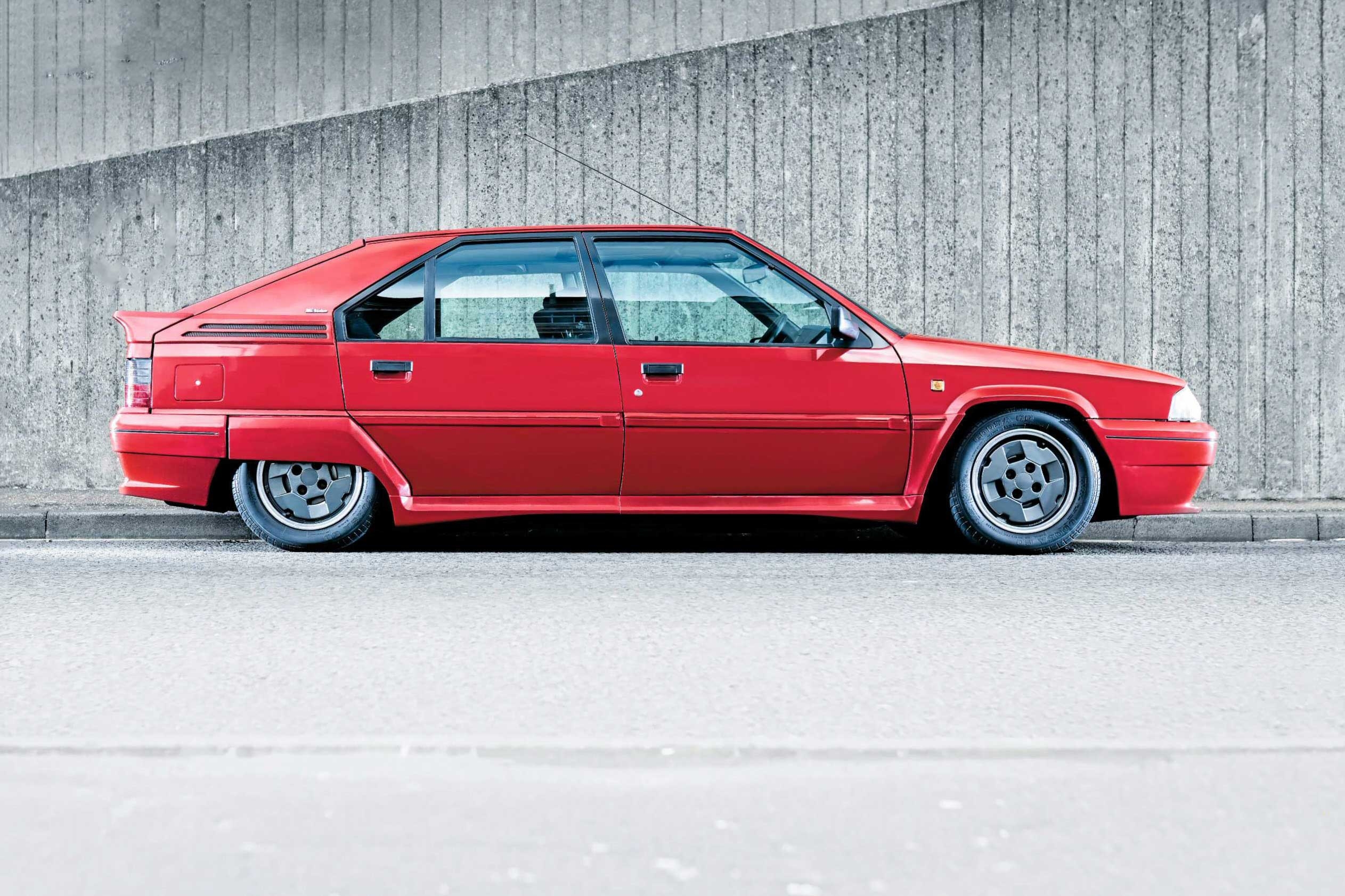 Sweet sixteen endangered species. Survivors worth saving. Only 26 left. Sacrificed to make 205 GTis go faster or simply left to rot, just 26 Citroën BX 16vs remain. But does its rev-tastic four-pot and mind-boggling tech make it worth saving? We strap in and find out. Words Nathan Chadwick. Photography Neil Fraser.

A screaming engine, space-age driving dynamics and brutal Marcello Gandini styling that could really have only been signed off in an era when the puffed-up, angular look applied as much to ladies’ jackets as it did to cars – welcome to the Citroën BX 16v, the Lamborghini Countach of hot hatches.

Gandini’s hand is everywhere; covered rear wheelarches, a hard-edged body in profile but subtle curves up close and exquisite detailing. Both have roots in the 1970s (Citroën bought an unused 1970s prototype design from Gandini), but they actually seem to fit the 1980s better. The BX could easily have starred in Blade Runner, and when the hydropneumatic self-levelling suspension rises up when setting off, you feel like Rick Deckard driving a spinner too.

But it wasn’t just the styling that was forward-looking. Early BXs (now known as phase Is) used plastic in the tailgate, bonnet and bumpers, and would have used more had it not been for PR concerns that the car wouldn’t feel premium enough. This made the BX light and economical, but it didn’t take long for sporty versions to appear. The GT and GTi used a variant of the Peugeot 205 GTi’s 8-valve 1.9-litre engine. But it was 1987’s GTi 16v that got contemporary road testers frothing at the typewriter.

The 16v not only gained eight extra valves but also a Peugeot 205 T16 Group B rally car-derived alloy cylinder head topped with a magnesium cam cover. That meant a 0-60mph sprint of just 7.4 seconds – impressive considering that the BX hits the top of second at 54mph, interrupting proceedings with another gearchange.

This didn’t add up to big sales. Too pricey to tempt Cavalier drivers out of SRis and too unrefined to sway execs away from German sports saloons, the BX struggled to find a market. Numbers dropped when modifiers harvested BX 16vs for 205 GTi engine swaps. Just 26 GTi 16vs are left on UK roads today. Worth saving? Let’s find out.

Richard Kitchen’s Phase II 16v has plenty for you to take in, mainly thanks to its wide glassfibre bodykit. If you grew up in the era of Blade Runner, Total Recall or even Terry Gilliam’s Brazil, you’ll find yourself cooing over the intricate bumper segments, scuttle trim and rear C-pillars.

That fascination continues in the cockpit. The black and light grey pinstripes on the deeply comfortable velour-covered seats bring back memories of 1980s Argos bedroom suites. The dashboard is a wall of curvy plastic, with big chunky buttons, and the steering wheel is stylishly angular. The italicised typefaces are a stark contrast to the dull text staring back at you from Fords and Vauxhalls of the era.

But it’s the engine that’s the star of the show. Fire it up and it sounds coarse and metallic, tingling with excitement. Get on to an open road and there’s pull from 1000rpm. The BX tugs on the lead all the way to 4000rpm, and then you may as well be trying to hold on to a squirrel-fixated greyhound. That coarseness becomes an eardrum-rattling fizz, getting louder and louder as the speedo needle rampages towards its 134mph max. It’s a proper screamer, a BMW six-cylinder-like wail that has you seeking the merest excuse to hear it again.

The gearbox is complicit; the gears are short on ratio. That helps to explain why the car struggled to sell against more refined rivals – enduring 4000rpm at 80mph would soon irritate most reps, but that role is now a distant memory on the BX’s CV. You’d expect a meaty gearchange to match the engine note but you can flick between the ratios, it’s so smooth and effort-free. You’ll feel like peak-era Prince playing power-riffs through a harp.

That delicacy is reflected in the handling – up to a point. With just 2.8 turns lock-to-lock, turn-in is sharper than a Frankie Boyle jibe, the angular snout instantly responding to steering input. Sadly, the steering is a bit numb, a fact blamed on the 195/60 VR14 tyres when new. Wider rubber would have helped, but there was nothing Citroën could do – 205 section tyres rub on the rear wheelarches.

On the upside, the ride is fantastic, ironing out even the most knotty potholes. That’s despite the springing rates being stiffer than the GTi (18% more on the front, 25% rear). However, the inflation pressures on the four gas and liquidfilled spheres that act as springs have been lowered too. The restrictor holes, which control how much fluid enters and leaves the spheres and pushes the diaphragm separating gas and fluid, are smaller than on the BX GTi. The effect is to allow more progressive compression, rather than simply having the car bounce around under load.

It works too, especially when pressing on. You can throw the BX into a corner and then balance it on the throttle, but it’s best to get your braking done early, and then feed in the power as you feel the suspension compress mid-bend. Confidence comes from knowing the BX will easily swallow bumps, allowing you to slingshot out of each bend quickly. Hard braking won’t disrupt cabin serenity either. The anti-dive system sends extra fluid to the wwfront struts to keep the car’s nose level, and the geometry of the front wishbones is set at an angle to dissuade the car from diving.

The suspension is both complex yet simple. In fact the whole car is a machine of great contrasts. The engine may scream like a feral child, but the rest of this visionary Citroën is as calm as a Peppa Pig-sedated toddler. Why aren’t more cars like this?

Richard Kitchen of Southways Automotive (southwaysautomotive.co.uk) says: ‘Though the BX put up an admirable fight against rust compared to its rivals, when they do go, it’s bad. The worst place is the sub-frame mounts, which double up as the rear jacking points and inner sills.’ Other bad places are under the window washer bottles, the A-pillars around the top door hinges and at the bottom, and the base of the C-pillars at the front of the rear wheelarches.

The sunroof doesn’t seal against the body – it sits in the plastic headlining that contains a drainage tray, which drains through four small pipes. They block, causing a wet interior. Budget £200 for labour and around £50 for a second-hand headlining.

‘The hydraulic system is pretty reliable, but the suspension pipes can rot. It’s possible to fabricate new lines from Cunifer tubing, and seals/ unions are all available, but it’s a time-consuming job,’ says Richard. ‘Re-piping a car can cost £400 if you’re lucky, up to £1k if you’re not.’

I BOUGHT ONE RICHARD KITCHEN

‘I’ve owned 60 cars since 2000 and this, my eighth, still doesn’t bore me. Each drive is an event. Parts aren’t expensive because lots are shared with Peugeots , but there is the odd 16v part that can be costly. No Ford RS tax here, though!’

Although the BX 16v is bigger than the pint-sized hot hatchbacks and roadsters normally hailed as B-road heroes, it offers just as much tarmac-monstering fun.

And when you seek calm, the BX will cosset you in ways 205 GTI owners can only dream of. It’s difficult to think of much this side of an Impreza that could keep up with it, point to point.

The joy comes from smooth, brisk progress, not Youtube showboating. That’s why we love it. It’s a car the likes of which you’ll never see again – a high-revving, naturally aspirated family hatchback that beguiles rather than bludgeons, that seduces rather than shakes.

Prices are already rising for the few cars that remain, and with the wider market looking favourably on 1980s cars with brutalist styling (such as the Lancia Delta), there is still room for more.

But this is a car whose real rewards lie on the bumpy roads that it was designed for. The supple ride, incisive steering and the screaming, freerevving engine is a recipe for big smiles.

+‘Prices have shot up as numbers have declined so quickly.’

– ‘The engine sump isn’t baffled so cornering can cause oil starvation.’

Spot a phase II by its lack of GTI badging.