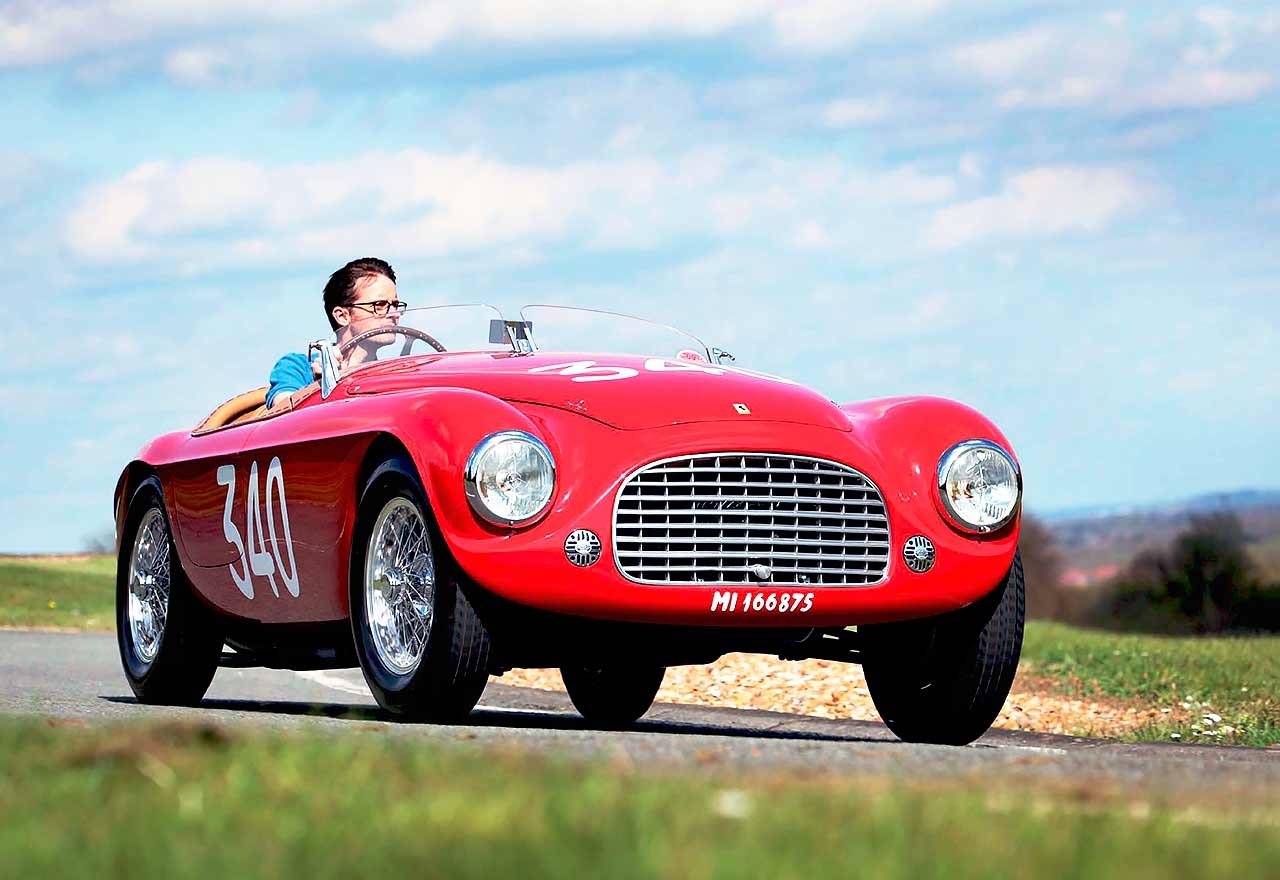 Castellotti’s Cavallino. We take the wheel of the 166MM that kickstarted the rise of Ferrari. James Page dreams of epic Latin road races as he samples a famous Ferrari 166MM – the first car driven by Italian hotshoe Eugenio Castellotti. Photography James Mann / Archive LAT.  In the tyre tracks of a legend.

Founding the dynasty: the 166MM made Maranello a racing superpower.

Driving any Ferrari 166MM would be a special experience, but chassis 0058M carries with it an even greater sense of occasion because it was the first car to be raced by Italian hero Eugenio Castellotti. Born in Lodi, which lies between the northern cities of Milan and Piacenza, Castellotti came from an aristocratic family and, even in his early 20s, had the wherewithal to buy the little barchetta from Braida & Co in Genoa.

His first outing in 0058M is thought to have been on the Giro Toscana in June 1950, at which time the car might officially have still belonged to Braida & Co. By the following year, however, it was definitely Castellotti’s and wore the registration ‘MI 166875’. That April, he used the Ferrari to tackle the Mille Miglia, finishing 50th overall but sixth in class, before embarking on a busy summer of competition during which he appeared in the Coppa della Toscana, the Portuguese Grand Prix, the Coppa d’Oro della Dolomiti and the Giro della Calabria.

Throughout Castellotti’s time with the 166, it was painted black and, at some stage during 1951, the Ferrari’s bonnet was replaced with one that lacked the original’s air intake. Other sources state that the scoop was added solely for the Mille Miglia before being removed straight afterwards. The engine was uprated with triple Weber carburettors, too, although Castellotti campaigned it less frequently the following year due to outings in the Scuderia Guastella 225S. He did use the 166MM during the 1952 Monaco Grand Prix, which was a sports-car race that year, and then signed off in style with victory on August’s Circuito di Senigallia.

In 1953, 0058M – still wearing its MI 166875 registration – was raced on a number of occasions by Ambrogio Arosio, including a return to the Mille Miglia. Later that year, though, it was bought by Californian dealer Charles Rezzaghi, arriving in the United States on 12 November. After being put on display at the San Francisco Motor Show later that month, the Ferrari returned to its natural habitat when Rezzaghi sold it to Berkeley-based Dr Raymond Craycroft. Following two years in which Craycroft raced it at the likes of Pebble Beach – placing second in a Cypress Point handicap event in April 1954 – Bakersfield and Madera, the 166 returned to Rezzaghi until he died in 1966.

Over the next 20 years or so, the car didn’t venture far, passing through two San Francisco owners before Lorenzo Zambrano acquired it in 1998 and had it restored by Bob Smith Coachworks in Texas. Since then, it’s been a regular on the concours scene, featuring at, among many others, Pebble Beach, the Ferrari Club of America’s annual get-together and Concorso Italiano.

Getting the chance to drive the car in which Castellotti started his career is a rare privilege. Inside, it’s finished to Lusso specification, which means that the interior is more thoroughly trimmed than in other spartan 166s. The gauges are grouped in the centre of the leather-clad dashboard, with the rev counter nearest to you, water temperature, oil pressure and fuel level together in the centre, and the speedometer to the far left. The handbrake, meanwhile, hangs down next to your right knee.

Reach through the wood-rimmed steering wheel to turn the key to the right, prod the starter, and the small-capacity V12 fires crisply; the car’s name comes from the 166.25cc displacement of each cylinder. Despite the presence of such luxuries as a carpet, thoughts that this is anything other than a competition car are swiftly dispelled. With an independent front end plus live rear axle, the chassis is beautifully balanced and friendly and, while the steering never truly lightens up, it’s swift and accurate. As you’d expect with unassisted drums, the brakes respond to nothing less than a firm shove of the pedal.

The four-speed gearbox does not tolerate fools. Correctly time your double-declutching and it’s an absolute delight – mechanical in feel and precise in movement. Get it wrong, though, and it’ll be noisy. Not in the belligerent way of a pre-war transmission, more of a gentle reminder that you’re no Castellotti.

The 1995cc, single-cam-per-bank Gioacchino Colombo V12 is a larger variant of that found in the earlier 125 and 159. With around 150bhp, it needs all of its rev range to deliver any meaningful performance, but once you’ve got it singing along the whole car comes alive.

The car’s stratospheric value, plus the fact that 0058M retains its original body, engine and gearbox, means that discretion has to come before valour, but the faster you drive it, the better it becomes – always the hallmark of a genuine racer. As we sweep through our undulating test route, the low doors making you feel exposed and heightening the sense of speed, it’s easy to conjure images of the Mille Miglia, chasing Lancias and Oscas across the Italian countryside.

By the time that Castellotti did just that, the 166MM had already played its part in the early development of Ferrari. It made its debut at the 1948 Turin Salon, where Giovanni Canestrini of Gazzetta dello Sport apparently gave the delicate little roadster its barchetta nickname. The taut design, with minimal front overhang and muscular rear, was the work of Touring, a young Carlo Anderloni overseeing the final shape.

But while the simple purity of its styling retains the power to stop people in their tracks, it was the 166’s race results that were of far more interest to Enzo, and one man did more than any other to prove its ability at the very highest level – Luigi Chinetti. Having twice won at Le Mans during the 1930s, he returned to the 24 Hours for its first post-war running in 1949. Sharing a 166 with Lord Selsdon, Chinetti took the start and stayed in the car until 4:26am the following morning! By that point, he had a three-lap lead and was back in the Ferrari before 6am, Selsdon managing only a short stint. Chinetti then nursed it home with an ailing clutch to claim the first of Maranello’s nine Le Mans wins – all of which would be achieved by 1965.

Two weeks after his French success, Chinetti was at Spa with 166 chassis 0010. Paired with Jean Lucas, he waited as first Maurice Trintignant then Robert Manzon took the lead, only for both to retire. The Ferrari hit the front but, with only half an hour to run, Chinetti spun on oil dropped by the second-placed Delage D6-3L as he approached Stavelot. Having given first-aid to a woman he’d run over during the course of his excursion, he returned to the pits where it was discovered that the 166 was a bit secondhand but basically safe. It carefully rejoined to complete its last two laps and take Ferrari’s second major endurance success in the space of a fortnight.

In 1948, Clemente Biondetti had won the Mille Miglia in a works 166 Allemano coupé. In ’1949, he did it again in an MM Touring barchetta, with Felice Bonetto second in another. In 1950, Chinetti and Lucas won the Paris 12 Hours, while the great Ascari claimed victory in a production sports car race at Silverstone. Even as the 1950s progressed and the model was superseded by the 195 and 212, 166s were still racing, and winning, all over Europe and the United States – the model was essential in establishing the marque’s American presence.

It wasn’t the first Ferrari, and nor was it the first Ferrari to win races, but it was the first Ferrari to win big races, international events that meant enthusiasts all over the world had heard of Enzo’s company and knew what it could achieve, what it stood for. Marques that tried to compete with little more than updated pre-war machinery found themselves swept aside by this bespoke jewel of a racing car – no less a judge than Ferrari legend and 1961 Formula One World Champion Phil Hill would later say that it ‘set new standards for sports cars’. The 166 truly announced the arrival of a new motorsport superpower.

Thanks to Girardo & Co: www.girardo.com

‘MARQUES COMPETING WITH UPDATED PREWAR MACHINERY WERE SIMPLY SWEPT ASIDE’

Having gained valuable experience with his 166, a 22-year-old Eugenio Castellotti really began to make a name for himself in 1953. By August’s Nürburgring 1000km, he had joined the works Lancia team and closed the season by taking third on the gruelling Carrera Panamericana in a D23. Castellotti was part of its brief Grand Prix programme in 1955. After finishing second in Monaco, he travelled to Monza to test a Ferrari 750. He phoned his Lancia mentor Alberto Ascari, who had dunked his D50 into the harbour and who was due to share the Ferrari, to come and watch. Ascari, still nursing a broken nose and a sore back, surprised everyone by asking if he could drive. On the third lap, he crashed at Vialone and died. When Lancia’s adventure came to an abrupt end mid-season, the D50s went to its Maranello rival and Castellotti became a Ferrari driver. He finished the season third in the standings, behind only the Mercedes of Fangio and Moss.

There was no doubting his speed, but his wild style struck a sharp contrast with his debonair appearance. On the 1955 Mille Miglia, his 121LM started a minute behind Moss, but beat the SLR to Ravenna. He shot past when the Brit ace had a minor ‘off’, grinning over his shoulder as he did so. In Motor Sport, Moss’ co-driver ‘Jenks’ noted that ‘…the Italian was so near the limit that on every corner he was using the rough stuff on the edges. We could never be sure whether we were going to enter it to find the Ferrari sideways across the road, or bouncing off the banks and trees’.

Castellotti eventually retired, but he returned in ’1956 to win in awful conditions aboard a 290MM; it would be his crowning achievement. He equalled his best Grand Prix result, too, by finishing a close second to team-mate Peter Collins in France. By then, Italy was captivated by the romance between Castellotti and actress Delia Scala, but it was to be brief. In March 1957, Castellotti was summoned to Modena to test the 801 GP car. He reluctantly left Scala in Florence, travelling via the Raticosa and Futa passes. Enzo reputedly wanted to reclaim Maserati’s lap record, while an internal rivalry had developed with Luigi Musso. Castellotti must have felt compelled to better Jean Behra’s time but, early in his first run, he hit the kerbs at a chicane and the 801 was launched into a roll. He was thrown out and killed instantly, aged just 26.