BMW E36 328i Saloon. This month it’s the turn of the E36 328i Saloon to go under the quick guide spotlight. The E36 might be getting a bit old now but the 328i in saloon form is the kind of car you should try at least once in your life. And with numbers dropping, now is the perfect time… Words: Simon Holmes. Photography: BMW.

The E36 Saloon emerged in 1990 initially with a range of four- and six-cylinder engines, some of which were carried over from the E30. There were new M50 six-pots and these were further refined in the mid-90s with the lighter and more powerful M52 versions. The upgraded units replaced the M50 engines and came in two sizes to suit two new models introduced to the line-up: the 323i and the 328i. The latter was powered by the 2793cc version producing 193hp and 206lb ft of torque, which made it the most powerful model below the M3. The 325i model was discontinued entirely at this point. 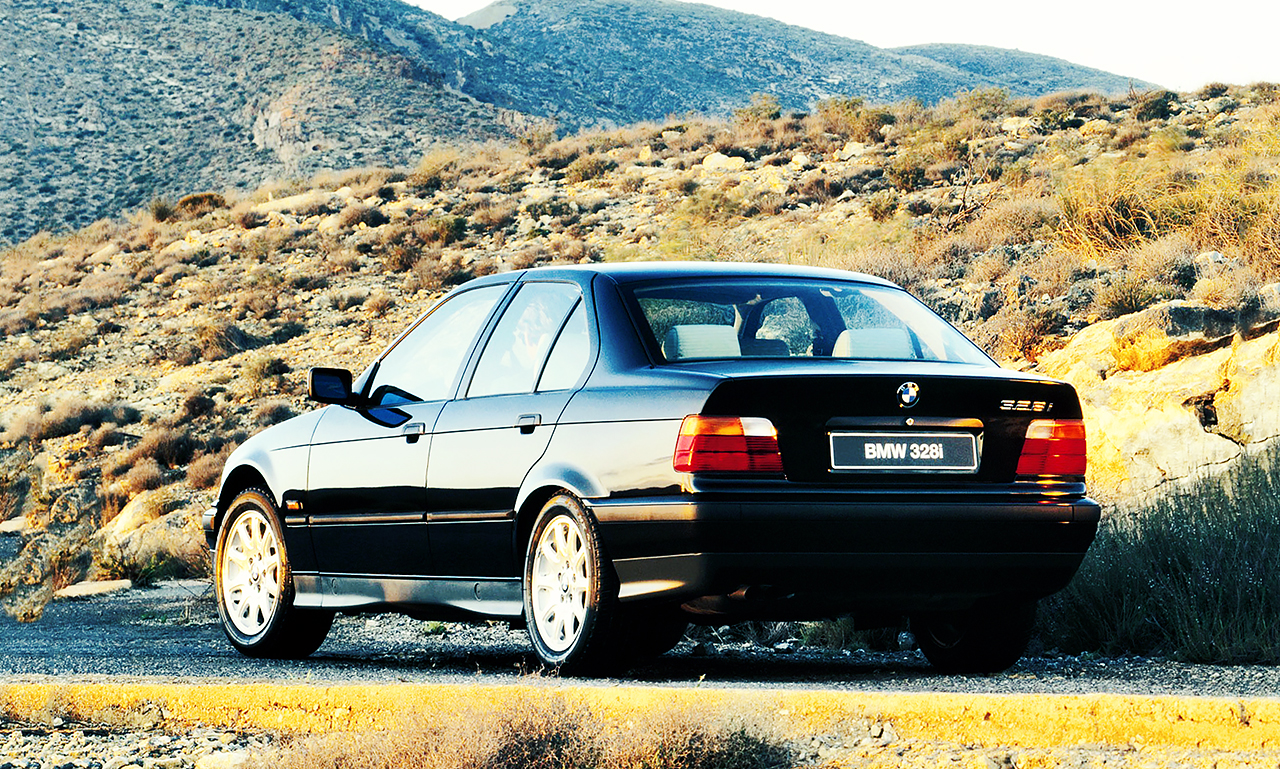 The new engine featured the same twin-cam Vanos arrangement as before but the main difference was this time it had a lightweight alloy block mated to an alloy head. A five-speed manual gearbox was standard but an automatic was also an option although it did hamper performance. The manual version managed 62mph from rest in a brisk 7.3 seconds with a top speed of 147mph whereas the automatic version took 7.8 seconds and could only muster 143mph. Fuel consumption also took a knock as the combined figure of 27.7mpg for the automatic couldn’t match the 30.7mpg set by the manual.

Standard spec included 15-inch alloy wheels, electric front windows and foglights. The only other trim level was the SE, which was a popular choice as it got you electric windows all-round, an electric sunroof or air-con, colour-coded bumpers and side skirts, headlight washers, metallic paint and an OBC. Prices started at £23,520 for the basic spec car and the SE was another £1900 or so. A Sport Package option was available on either model for an additional £1720 and included an aero kit, sports seats, half leather trim, clear indicator lenses, 16-inch wheels, front foglights, Sport Suspension and a M Sports steering wheel.

These cars certainly aren’t what you would call good on fuel but that will, of course, depend on how you drive it. Feather a 328i that’s in good health along the motorway at a steady speed and you should expect to see 40mpg. Around town that plummets to nearer the 20mpg mark and if you like making use of the power then lower is possible.

Being old enough to clear the emissions-based road tax brackets the 328i costs £126.50 for six months or £230 for a full year. Servicing costs a pittance compared to newer BMWs and a vast majority will have been looked after by local garages rather than dealers anyway. Last of all, the good news: all E36 models qualify for a classic car insurance policy, so costs should be very managable if you can live with a limited mileage policy.

The trouble is these cars are actually becoming quite rare. Secondhand examples crop up every now and again but you can’t afford to be too picky. Generally, the market divides up into two camps. First, there are battle-scarred examples that have lived a hard life but still have some go left in them. These can be had for less than a £1000 – if you can find one. Then there are the well-looked-after cars with a low number of owners and have a history folder. Although miles are usually still high, they have taken them well. These are actually easier to source and we found a 1995 SE auto version with 125,000 miles but just two owners from new for £1495. Similarly, we also came across a 1996 SE manual with 132,000 miles and leather for £1800. Low mileage cars will come up if you can wait.

It all depends on what you want from the car but the 328i could be either a cheap runaround with some real poke for extra fun or a piece of what is quickly becoming BMW nostalgia. The 328i was one of the first fast 3 Series saloons and even though there have been plenty of faster versions since, it still holds its own in many ways. Being 20 years old the E36 feels much more raw and stripped back than you might remember. It’s free of complicated electronics and that makes it feel like a fun car to drive compared to modern machinery. The saloon is far more understated than the Coupé or Convertible version and its also a lot less popular, so if that appeals to you then you need to find yourself one soon.

The M52 engine was known for Nikasil problems early on but those issues were weeded out and generally won’t affect any car now. However, cooling issues are much more of a problem caused by corrosion over time and the water pump, thermostat, fan, hoses, radiator and expansion tank are all known to fail, so keep an eye out for leaks and closely monitor the temperature gauge. Gearboxes are strong but clutches that are particularly snatchy or make odd noises during operation indicate a replacement will be needed. Auto gearboxes are known to clunk and hesitate if they are low on oil and it’s usually worth changing the oil anyway.

Worn bushes will make an E36 feel very tired and sloppy and the model is known for knocking through rear trailing arm bushes and subframe mounts, as well as top mounts. A loose feeling at the front end indicates lower control arms, thrust arm bushes, steering rack or track rod ends. If the brake pedal acts strangely or weird noises come from under the bonnet under braking then it’s likely to be the ABS pump and vibrations through the handbrake usually mean the cables have become dislodged. Also, at the rear, the brake dust shields become corroded and then rattle annoyingly but worst still they cause issues for changing the brake pads.

Bodywork-wise you need to worry about rust as it tends to take hold of the E36 in certain places. Check all the way around the rear arches and where the bumper meets the quarter panel to under the taillights. Outer sills, the battery compartment and front wings around the arches can all rot as well, so check them out. On the inside, electric window regulators are prone to failure. The warning sign is that they make a noise just before they give up. The instrument cluster can cut out due to a loose connection and the sunroof can work itself loose, too. Faulty heaters that refuse to blow hot or cold will require a new solenoid and climate control that doesn’t work is usually due to a failed capacitor on the circuit board. Particularly annoying on the inside are the rattles which can emanate from the rear seat latches, the glovebox, the doorcards or the kick panels, so make sure these are all secure.

The E36 is getting to the point in its life where it’s due to make the transition over to modern classic, like the E30 did some years ago. However, just like its elder, the E36 is fast disappearing from our roads as rust, among other things, reduces its numbers. The rarer models are becoming hard to find and the 328i saloon is an understated treat that should not be overlooked. Its performance is still enough to excite anyone today and find yourself a good one and there’s nothing to stop you putting it to use everyday. So if you fancy a slice of fast and practical motoring from the best of the 1990s then go for it.

Figures in brackets for automatic version