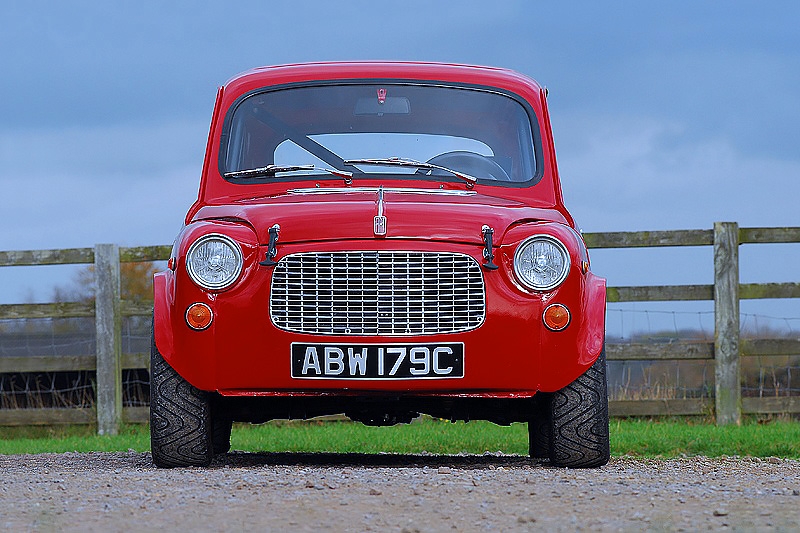 You emerge with a voce half an octave higher – and a rictus grin. In the 1960s, Tornado created an unlikely Fiat 600 hybrid – and then David Render went even further. Richard Heseltine braces himself. Photography Tony Baker. 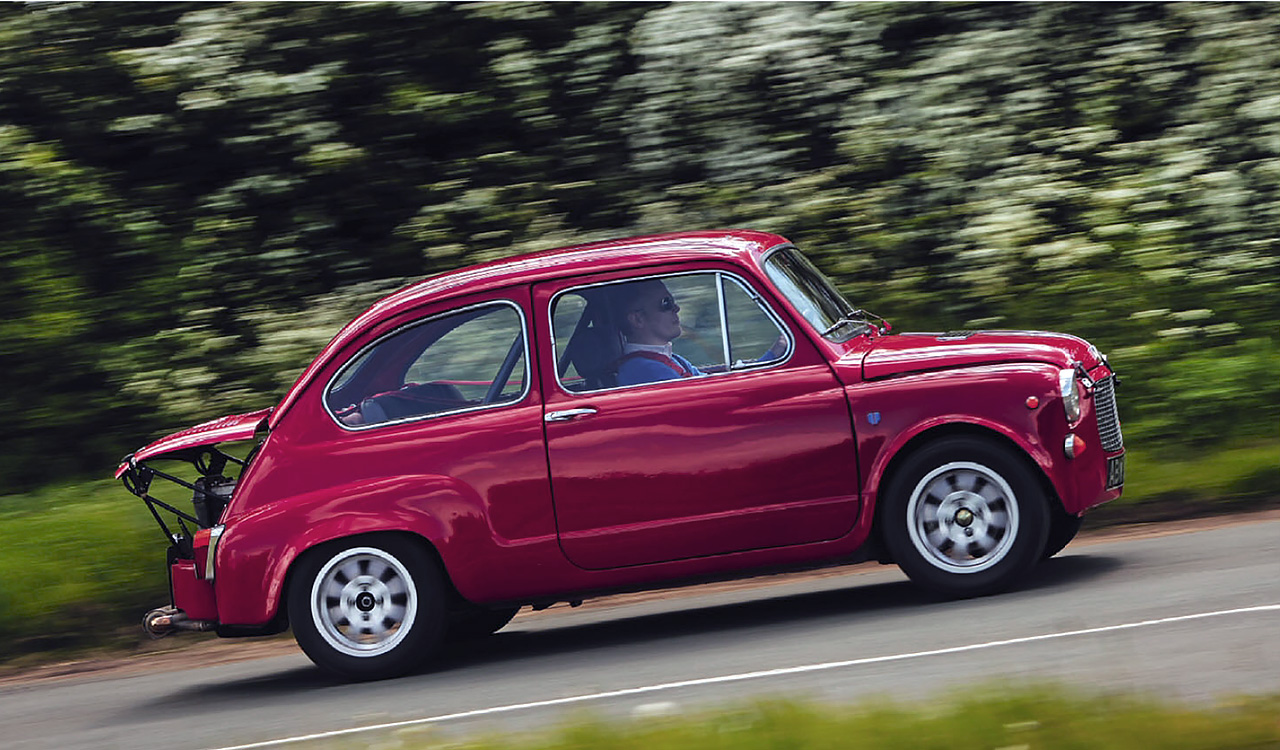 Below: the ex-Render car originally had a bespoke closed engine cover. The panel survives, but owner Castle-Miller prefers this propped-open version.

Some cars incite chills of dread, not anticipation. The Tornado-Fiat 600GT is one of them. On first sight, it’s hard not to look on in I puckered silence. There is no ‘facade of normality here, just a small Italian shopping car with a Lotus Twin Cam slung behind the rear axle. It just looks so, well, out there – like some sort of Darwinian fluke whereby two disparate species somehow mated and produced a mutant strain. It cannot possibly work.

Except it did. Scroll back the better part of 50 years and the car pictured here terrorised speed events, racking up dozens of class wins in hillclimbs and sprints. It then went on to enjoy a secondary career as a circuit weapon. What’s more, this wasn’t just some homebrewed lash-up. For a brief period in the mid-1960s, you too could have owned Rickmansworth’s take on the hot Fiat theme, out Abarthing Abarth by adding horsepower by means of a shoehorn.

Hertfordshire’s Tornado Cars was one of the more respectable outfits to emerge during the 1950s ‘specials’ boom. Its products were well made and build-able, the firm attempting to garner mainstream acceptance with the handsome Talisman coupe of 1962. This was an altogether more ambitious machine, on which rested the firm’s hopes of making the leap to production-car manufacturer. Sadly, it was undone by a lack of finance, among other issues, and the company lurched into receivership in 1963.

Into the breach stepped successful gentleman driver John Bekaert, who had enlivened national race meetings with his handling of sports cars including an HWM and a Costin-Lister. Bekaert set about creating an entirely new breed of Tornado. He had become enamoured with Abarth’s tuned Fiats but his concept called for a much bigger engine – and not one of Italian origin. Engineer Robert Yeals, whose credits included the Willment overhead-valve cylinder head for the Ford sidevalve ‘four’, set about creating a conversion kit that mated a 1498cc Ford Cortina engine to the Fiat’s transmission via a specially made bellhousing.

The result of this gene-splicing was a car that made the most of its 75bhp, 0-60mph taking 8.8 secs en route to 98mph flat out. The Tornado- Fiat 600GT went on sale in 1964, costing £895 including taxes. What’s more, you got a brand spanking new Fiat engine as a spare. Bekaert’s own car was tested extensively by the motoring press in period, although it was misidentified as a Fiat 500 in some reports.

Whether or not he was seriously interested in producing the Tornado-Fiat in volume, or ownership of a marque was a mere indulgence, remains unclear. We suspect the former. Bekaert clearly wasn’t content with standard Blue Oval power, however, because he subsequently installed a Ted Martin-built 1850cc Ford unit in the back of the prototype. This dry-sumped race engine had a 12-valve head and, in this form, the car could cover the standing kilometre in 26 secs with a terminal speed of 130mph. 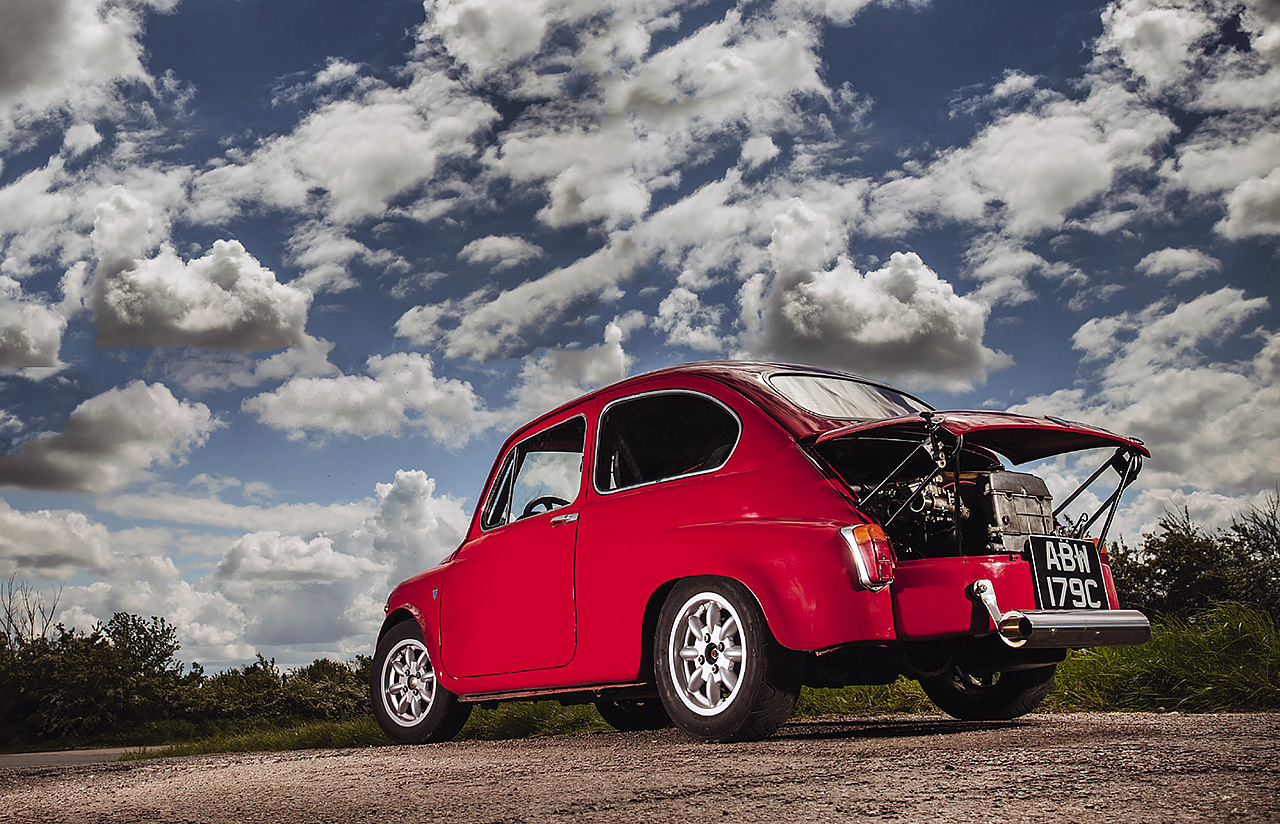 Sting in its tail!

The first punter to take the plunge was David Render, a prolific competitor who had enjoyed success in numerous motor sport disciplines. He recalls: ‘I was at a London Motor Club committee meeting one evening. I was sitting next to John and it was going on a bit. He said: ‘I’m fed up with this, let’s go outside and have a drive up the road.’ I asked him what car he had, thinking it would be something special. He replied: ‘A Fiat 600.’ I suppose I looked a bit surprised because he added: ‘Well, it goes.’

“We went outside and there was this bright red Fiat. The thing took off like a rocket; it was incredible. John then asked if I’d like one. He said: ‘Mine is red, so I’ll do you one in white and another in blue.’ A while later he delivered me this car and I took it out to Blackbushe (for the 1965 Sydney Allard Dragfest). Mine came last while John’s won its class. I was wondering what sort of shaggy engine he’d put in my car, not knowing that he had a special one in his. I wasn’t about to lose again so I phoned up Colin Chap-man, who was a friend from way back, and he sold me a Lotus Twin Cam at a special rate.” The change of engine resulted in more power. That, and a raft of problems. Render: “The next time I took it out, there were gears on the floor. My mechanic pointed out that the gearbox was designed to handle 30bhp or thereabouts, and it was now having to cope with 145.” Render’s answer was to create a solid rear axle, which only led to further dramas: “We took it to Duxford for a sprint – the course went one way and the car just carried straight on. We added some fatter tyres and so on, but there was a lot of work to do.

“I then thought: ‘Hold on a minute – if I slide the bloody thing, it will be all right.’ So, from then on, I would jerk the wheel before the corner, put my foot down and steer it using the accelerator. I would get these wonderful four-wheel drifts and, before you knew it, I had a fan club!” 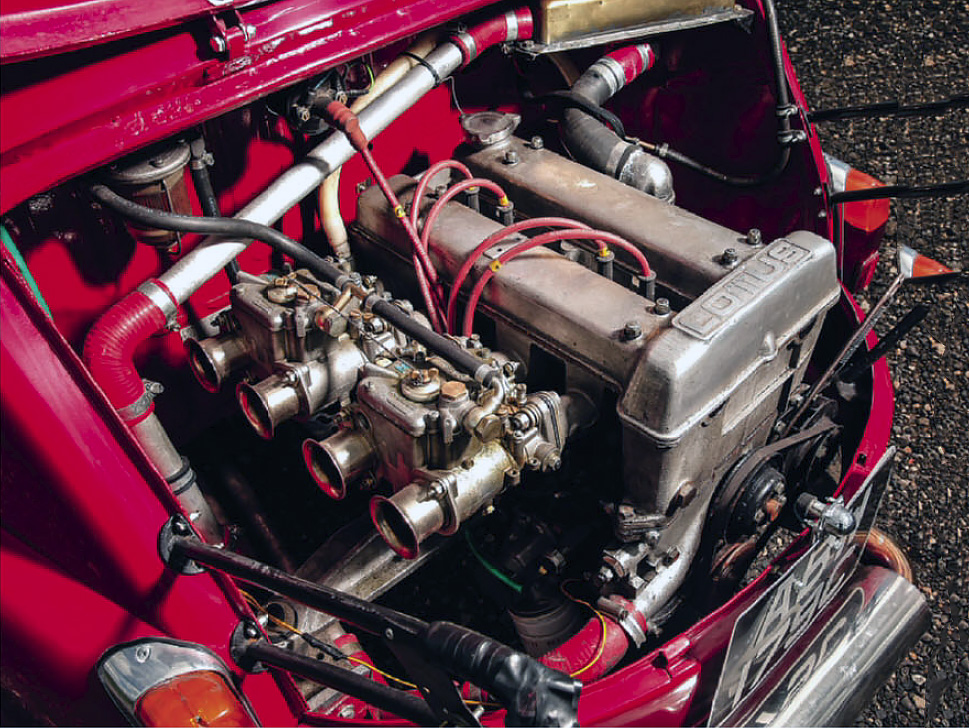 From top: air-cooled ‘twin’ has been replaced by Lotus Twin Cam – CCC article inset; the car was rebuilt around a left-hand- drive shell; an unlikely combination of badges; Minilite-style alloy wheels

Tornado Cars, however, wasn’t doing too well. Bekaert sold the firm in 1966, and it’s widely held that only three Fiats were converted. Render continued to campaign his car until 1971 before returning to single-seaters; subsequent custodian Tony Castle-Miller acquired it in March 1972 after spotting a classified advertisement in Autosport. The future Abarth authority tore up from South Kensington to Totteridge Village, North London aboard his Ford Escort Mexico. Render said that he was clearly the right man to own the car given that so little time had elapsed from the initial phone call to his arrival. The sprint veteran also added that the 600GT should not be used for circuit racing.

But Castle-Miller had other ideas. He claimed a class win second time out at Snetterton that same year, although the pace of development in Special Saloons was such that it became outclassed as the years rolled by. At the end of the ’70s, the car was rebuilt to Abarth 1000 spec, the Tornado package being placed on a shelf, where it remained until 1987 when the assorted parts were bought by marque enthusiast Chas Medlen. Plans to recreate the Render car around a donor bodyshell came to nought, however, and Castle-Miller reacquired the parts in 2007. He set about incorporating them into a new seam- welded body found in Italy (hence the switch to left-hand drive). Just to confuse historians, the car was repainted red rather than its previous white to ape Bekaert’s original car.

The Middle Barton Garage principal was otherwise at pains to recreate it as close to its 1960s specification as possible, the most obvious alteration being the lack of the original hump-backed aluminium engine cover. He still has it, but prefers the Abarthesque propped-bootlid look. And it does look fabulous, the size of the exposed Lotus engine and the pronounced negative rear camber only heightening the sense of cartoonish lunacy. You cannot help but smile.

Up front, the most obvious deviation from a regular 600D is the 1100 grille. Once inside, though, it could only be a racing car. As with the standard Fiat, it comes as a surprise just how much room there is. That said, the six-point roll-cage does eat into cabin space, the main point of focus being the gaggle of white-on-black gauges; those and the sizeable red oil warning light that was added by Render in period.

Having wrestled the harness into submission and taken a deep, cleansing breath, it’s time to prime the carbs and fire the Twin Cam. You do so with a sense of trepidation, expecting this to be a wild ride – that it’s going to try to kill you. That sense is amplified as the engine awakens with a raucous fanfare, a surround-sound barrage of noise that you feel as much as hear.

The regular 600D transaxle has received one or two upgrades, not least straight-cut, close- ratio gears, an Abarth 9/41 (4.56:1) final drive plus a strengthened diff and beefier driveshafts. The competition clutch is a mite stiff, but you  soon acclimatise, the change across the gate being close-coupled and feeling direct.

Even at pottering speeds, the car is fantastically noisy – but what a noise. It’s all pop and fizz, matched for volume only by the transmission whine. But it’s when you rev it hard that the Tornado’s true character emerges. For a car of its size and age, it is remarkably quick. Its owner estimates that it will reach 60mph from a standstill in 6.5 secs. If anything, he’s being pessimistic. The Tornado has completed the standing quarter-mile in 13.1 secs with a terminal speed of 102mph, and it feels even faster. 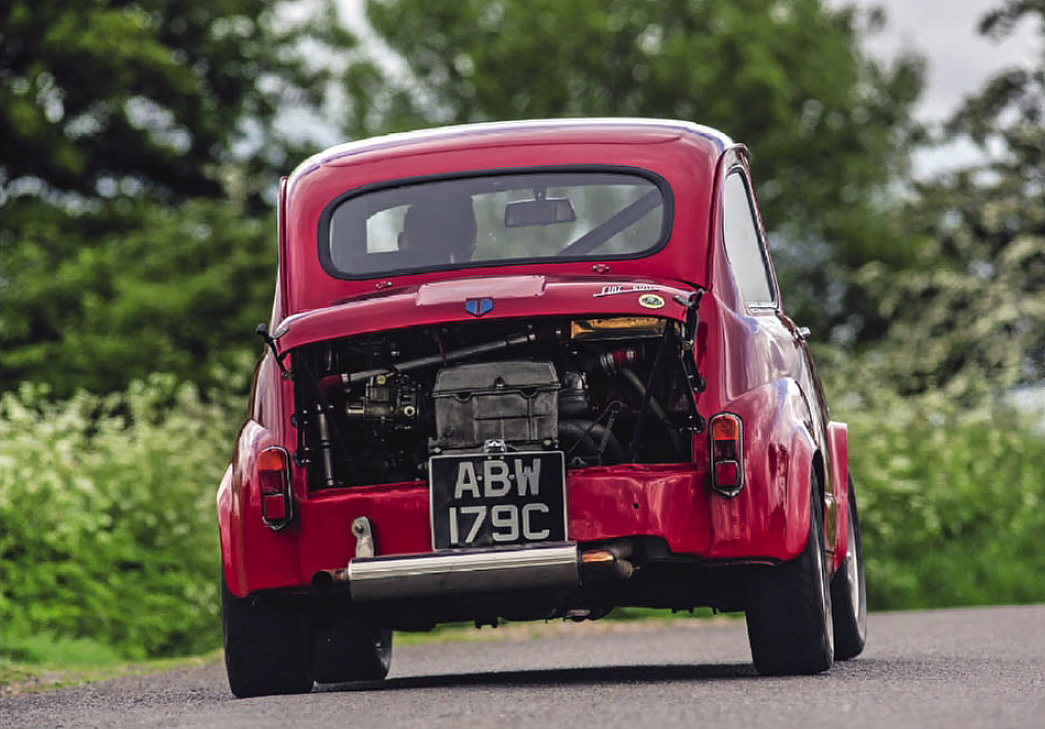 From top: traction is very impressive, with no rear-end waywardness at normal speeds; stripped- out cabin; Castle-Miller behind the wheel in the 1970s; the gearchange is tight and nicely direct

That isn’t the remarkable bit. Though the suspension set-up has received a few tweaks, not least uprated springs and adjustable dampers, it remains largely Fiat 600-based. And you cannot forget that it has an engine with a cast-iron block sited some way behind you. As such, you expect the 600GT to move with all the grace and stability of a well-flung house brick, but it doesn’t.

The front end doesn’t feel disconnected at speed; the steering doesn’t suddenly get light because there isn’t a sense of the nose lifting. At a reason-ably enthusiastic pace, it turns in without the expected understeer, and there are nopendulum- effect shenanigans when exiting a bend.

Acceleration out of corners is of the slingshot variety because of the excellent rear traction, and at some way shy of ten-tenths it seems unthreatening. Castle-Miller says that it’s only tricky when you’re wringing its neck, but that is true of most cars. You approach the 600GT expecting it to be a handful above walking pace; that you will probably end up rotating like, well, a tornado amid a fug of tyre smoke and expletives. But a degree of commitment pays dividends, to the point that this car defies assumptions. You emerge with a voice half an octave higher than normal; that and a rictus grin. It’s a mouse that roars, a legend in miniature. It’s bloomin’ brilliant.

Thanks to Middle Barton Garage: middlebartongorage.com