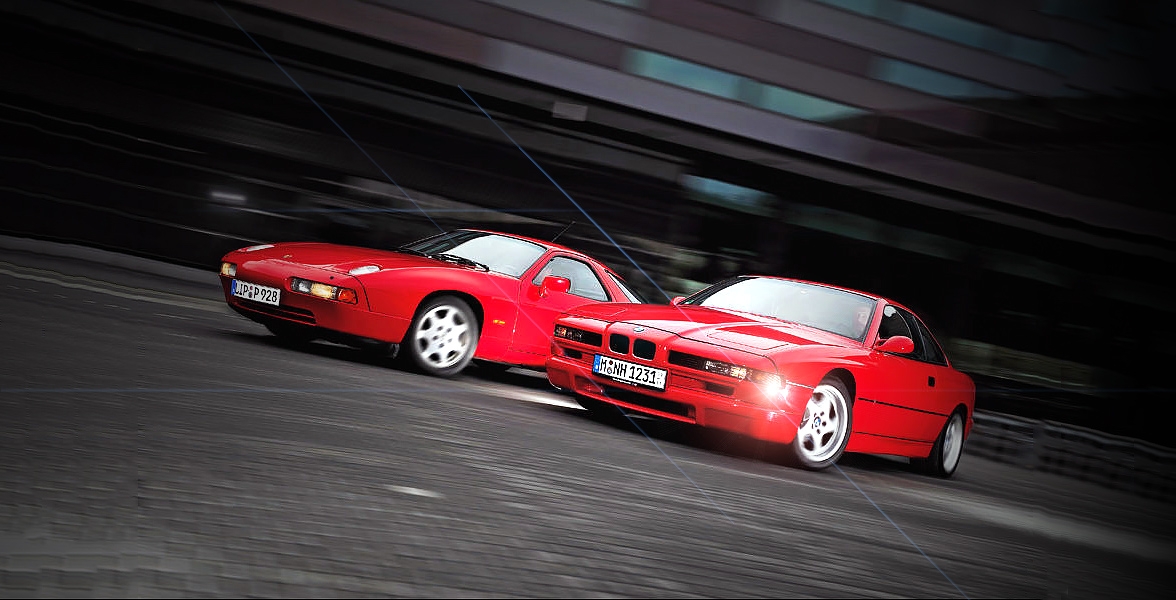 Deutsche Treats BMW 850i E31 vs. Porsche 928 GTS – giant comparison test. Germany’s two big-dollar sports coupes face off; we pick the winner. The gas-station orderly was dumbfounded. “Didn’t you stop here yesterday in that $90,000 purple Porsche?” he asked, staring at the $91,017 Laguna Green BMW 850i E31 parked next to his pumps. 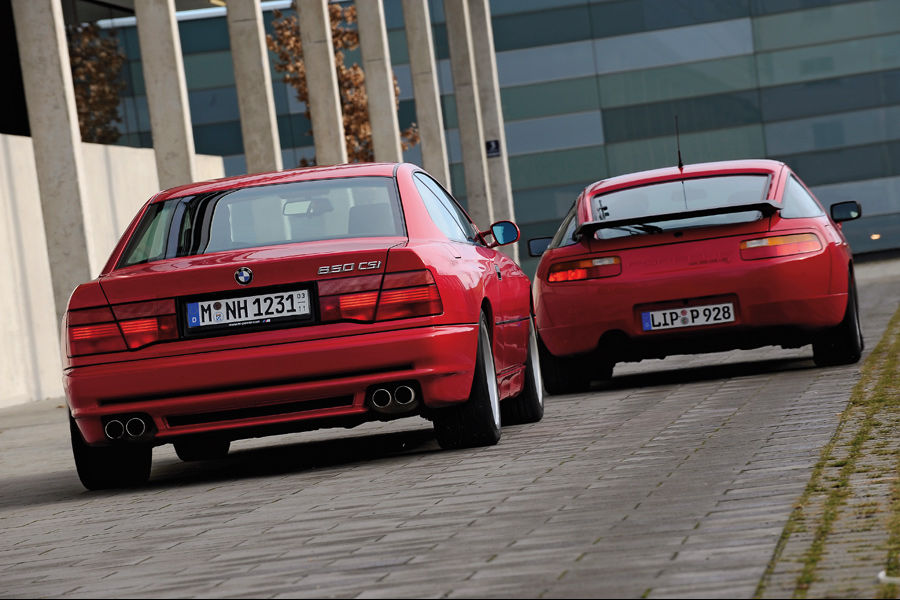 The Wagnerian warriors on these pages represent Germany’s two answers to the question: How do you build the best sports coupe in the world? (The R129 Mercedes-Benz 500SL’s power and price could also put it in this challenge, but its two-seat convertible profile suggests a distinctly different mission.) Both are very German in their approach: bigbodied, rear-drive, mega-horsepower bruisers built for confident running well into the speedosphere. Both feature sternly sensible cockpits and the latest performance-enhancing hardware. And both cost about what a savings-and-loan boss used to spend in a three-day weekend. 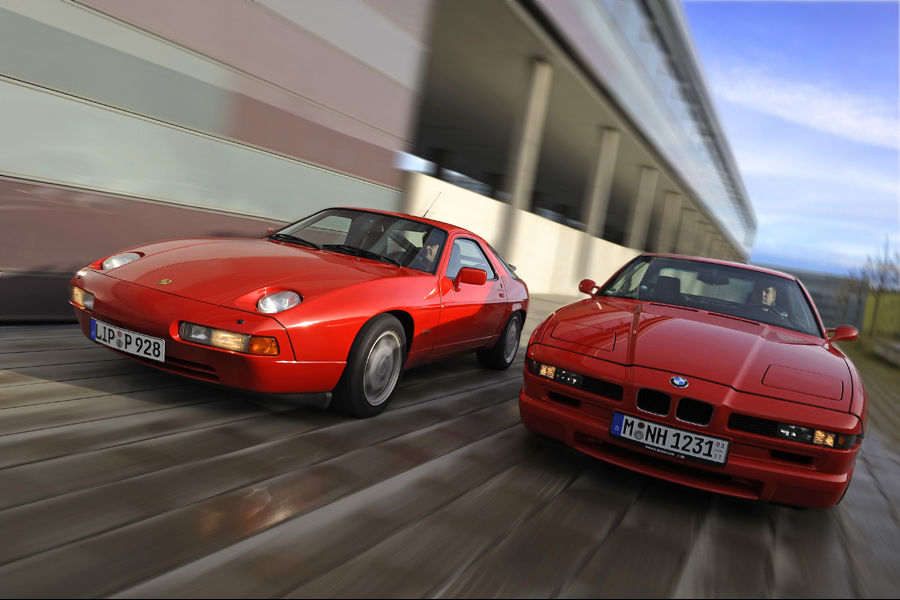 Yet, in many ways, these are very different automobiles. BMW’s suave 850i E31 replaced the chiseled 6-series coupe E24 in the 1991 model year. Like its predecessor, the 850i is a luxurious two-plus-two built for impressive speed but not at the expense of comfort. Its long 105.7-inch wheelbase helps provide a composed ride. Its 5.0-liter V12 engine M70 — from the 750iL E32 sedan — makes effortless, turbine-like power. And its sheer heft — a whopping 4134 pounds-implies both solidity and extravagant hardware. Indeed, the E31 850i equipment list seems endless. There is traction control. A power- adjustable steering wheel and driver’s seat with memory. An elaborate audio system with cassette and six-disc compact-disc changer. A standard cellular telephone. An electronic climate-control system with separate controls for each front seat passenger.

And tightly sealed frameless side windows that, at the touch of the door handle, automatically pop down a half-inch to allow the door to be opened. Porsche’s 928, in contrast, is a luxurious but more overtly sporting machine. In service in ever-improving versions since 1978, the 928 received a significant performance upgrade this year (it was introduced in spring as a 1993 model). The double-overhead-cam, 32-valve V8 in the new 928GTS — which replaces the S4 and GT models — has been stroked from 5.0 to 5.4 liters. Power is up from 326 hp at 6200 rpm to 345 at 5700, and torque has increased twelve percent, to 369 pound-feet at 4250 rpm. A two-inch-wider rear end surrounds new seventeen-inch tires: 225/45$ in front and 255/40s in back. The brakes remain vented discs all around, but the fronts now use the massive 12.7- inch rotors from the 911 Turbo 964.

Like the 850i, the 928GTS is loaded with hardware — including a tire-pressure monitoring system, a 160-watt stereo with cassette, and an electronically controlled limited-slip differential able to deliver any or all of the available torque to either rear wheel. Yet the 928GTS does not share the BMW’s bulk. At 178.1 inches, it’s a full ten inches shorter overall. And though at 3708 pounds the Porsche is no bantamweight, it is more than 400 pounds lighter than the 850i.

Bulk and power tell much of the talc at the test track. Both of our test cars were equipped with four-speed automatic transmissions (the Porsche offers a five-speed manual and the BMW a six-speed, but few customers opt for them). The 296-horsepowcr 850i accelerates to 60 mph in 7.2 seconds and runs the quarter-mile in 15.6 seconds at 93 mph. The lighter, 345-horsepower 928GTS, in comparison, blasts to 60 in just 5.3 seconds and nails the quarter-mile in 13.8 seconds at 102 mph. Top speed for the Porsche is 166 mph. The BMW’s “drive-by-wire” electronic throttles automatically curtail acceleration at 155 mph.

Mash the go pedal hard onto the downshift switch and the 928GTS rockets forward in a frenzied rush, pulling with particular lustiness once the tach needle swings past 4000 rpm or so. It’s a compelling sonic event: 84 decibels of V8 sound and fury.

The BMW is altogether more genteel. Hard acceleration produces but 75 dBA of cockpit din, and the M70 V12 winds toward the redline with a smooth, steady surge of power. Such civility is laudable, but some drivers may find this car’s run-hard flavour a little bland.

On the other hand, the BMW’s grace pays off during long cruises. Up to 80 mph or so, the cockpit is a virtual tomb. Though our sound-level meter registers 70 dBA of background noise at 70mph cruising, it’s not the type of sound that’s intrusive to the ears. Perhaps it’s the seal-tight side windows, perhaps it’s the E31 850i’s claimed 0.29 drag coefficient (Cd or Cx), but at highway speeds there is no wind noise. None. It’s eerie.

In the Porsche, motoring is more up-close-and-personal: at a steady 70mph cruise, the 928’s cockpit is filled with 76 dBA of engine and road sounds.

Match up these two cars on a twisty road and it’s no contest. The Porsche behaves like a leather-lined 962, clawing through turns with 0.87 g of grip, charging forward on the straights like a Miura bull, and displaying unfailing poise all the while. The steering, equipped with force- sensitive variable assist, is fluid and free of dead spots — there’s plenty of feedback through the wheel as the car sweeps through bends. And the ride, we’re happy to report, is not as jaw-jarringly stiff as the old GT’s. Porsche says there are no significant suspension differences between the two models; probably the difference is attributable to the new car’s larger Bridgestone Expedia tires (the GT wore sixteen- inch Bridgestone Potenza RE71s). This is a supercar, yes, but it’s also a car you can live with at sedate speeds.

The 928GTS’s brakes, equipped with ABS, are worthy of special mention. From 70 mph, they stop the car in just 162 feet. They do not fade. They are simply superb.

The BMW docs not take to hard charging with nearly the eagerness of the Porsche. Cornering grip is 0.80 g, and the car taxes its front tires more than the 928. It tends to roll more, too — it doesn’t respond as crisply as the Porsche. The BMW feels as heavy as it is. The 850i’s variable-assist power steering generally works well, though the effort is noticeably lighter than the Porsche’s.

Our test car was equipped with BMW’s optional Electronic Damping Control ($1470). With this system, the driver chooses one of two suspension pro-grams — Comfort or Sport — and a computer then selects one of three damping settings for the shock absorbers, depending on such variables as vehicle speed and steering-wheel angle. We found ourselves always leaving the system in the Sport position; the resulting ride was fine — controlled, comfortable, and without the floatiness of the Comfort setting.

Both of these cars offer well-equipped cabins for two (forget about putting real people in the rear seats of cither car), but the BMW’s has the edge. Roomy, airy, and smartly designed, the 850i’s cockpit is shipshape without being stark. The air-bag-equipped wheel tilts and telescopes into proper position, the driver’s seat adjusts easily, and the view to the outside is unrestricted. The audio system sounds impressive, and — as noted before — intrusive cabin noises are minimal.

The Porsche’s cockpit is also praise-worthy, but it’s more dour. You sit low in this car, your feet deep in the pedal tunnel, your knees up against the dash bolsters, your vision to the rear obscured by the thick B-pillars. The driving position is fine, but it’s restrictive. This is not a car you slip into — it’s one you strap on.

The Porsche’s instruments arc large and clear, but some of the controls — such as the complex trip computer — require study to master. Dual air bags are standard — a big plus. The stereo, like the stereo in many other Porsches, is simply awful. Probably there’s a message about this car’s mission here.

These are two of the more exciting- looking cars on the road. The Porsche has remained remarkably fresh during its fourteen years, and there is no other car we can think of that so encourages drivers in the lane ahead to move over. “Uh-oh. That’s a 928 coming up behind us. Better get the hell out of the way.” It definitely has an intimidating nose, this 928.

But while the 928 elicits stares for its formidable contours, it’s the BMW that causes onlookers to beam. This car draws crowds like a Madonna sighting. Undoubtedly some of the attention is due to the car’s newness in the marketplace. But the BMW’s squat stance and wide, wedgy shape — which photos somehow don’t convey — give it a look that is exotic and at the same time elegant. People seem to love the combination.

So which of these German titans would we drop our $90K on? We’d opt unhesitatingly for the Porsche 928GTS. The latest iteration in this illustrious line is awesomely fast, refined enough to drive every day, and built like a blockhouse. It’s one of the world’s great automobiles.

The BMW 850i E31 has the looks, the manners, and the luxury expected for this class, but its unspectacular performance leaves us cold. Fortunately, we hear that BMW has plans to vitalize the 850i with a high-output version of the V12, probably in about a year. When that model arrives, we’ll be ready with Deutsche Treats.