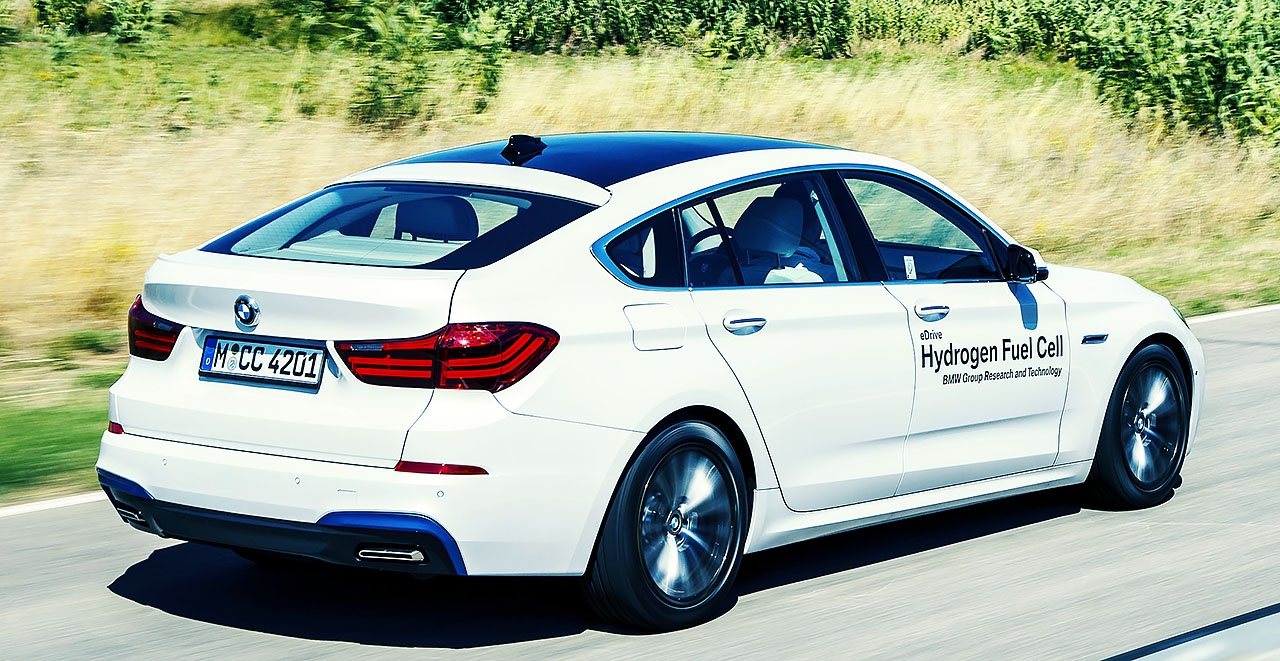 This BMW 5 Series GT F07 might look fairly normal, but it is in fact a hugely advanced hydrogen fuel cell prototype electric vehicle – and BMW Car has driven it. Words: Matt Robinson.

Range anxiety still hovers around electric vehicles (EVs) like a particularly malevolent spectre. Unless we’re talking about Elon Musk’s black magic in the Tesla Model S – which, despite being the fastest and most powerful EV, is also the one possessed of the greatest range – then too many people are still concerned what will happen to them if their EV runs out of volts. It’s not like you can carry electricity in a jerry can, is it?

It’s a problem BMW has already addressed with the i3, which comes as either a pure EV or as the Range Extender model. The i3 ‘Rex’ features a small motorcycle-sourced two-cylinder petrol engine underneath the back seats, its primary purpose purely to keep the lithium-ion battery topped up so the i3 can travel a theoretical 186 miles, instead of just 93. The thing is, as light as that 647cc petrol is on fuel, it rather defeats the main objective of having an EV: zero-emissions running. And given that the vast majority of our mains electric power in this country still comes from non-renewable, fossil fuel sources, the actual ‘true’ green credentials of any EV are less impressive than stated by the manufacturers. So BMW is trying another route, and this rather ordinary looking 5 Series GT is it. It has an electric motor with a two-speed reduction gear transmission mounted in the rear driving the attendant axle only, but it’s what provides the charge for the battery pack that’s of most interest. For this is a fuel cell electric vehicle (FCEV) and that means it is BMW’s latest foray into the world of hydrogen.

Munich has a long history of dealing with this fuel, first dipping a toe into the experimental waters in 1984. But the more memorable H-products were the bivalent Hydrogen 7 first seen in 2005 – it featured a 6.0-litre V12 engine that could run on either petrol or hydrogen – and the record-breaking, swoopy H2R, which was the fastest hydrogen combustion engine car in its time, clocking up an FIA-ratified 186.52mph.

This 5 Series GT, however, doesn’t have the internal combustion engine of either the Hydrogen 7 or H2R. Instead, its front-mounted fuel cell functions in the same way as the two-cylinder petrol unit in the i3 Rex – it is there purely to supply power to the FCEV’s battery pack. The big issue with hydrogen has always been storing it safely, but BMW has worked with Toyota on this project to pool their considerable resources and come up with a new storage tank.

That item is mounted longitudinally in the Five’s chassis, occupying the space in the transmission tunnel that would ordinarily be taken up by the propshaft and gearbox. It’s a huge, cylindrical construction that can store gas in two ways: the first is with the hydrogen fuel held at 350bar, meaning 4.5kg can be retained for a theoretical electric range of 280 miles; the second involves ‘cryo-compressing’ the gas into the same space, allowing 7.1kg of fuel to be pumped on board for a 438-mile range. That should keep the EV doubters silent. 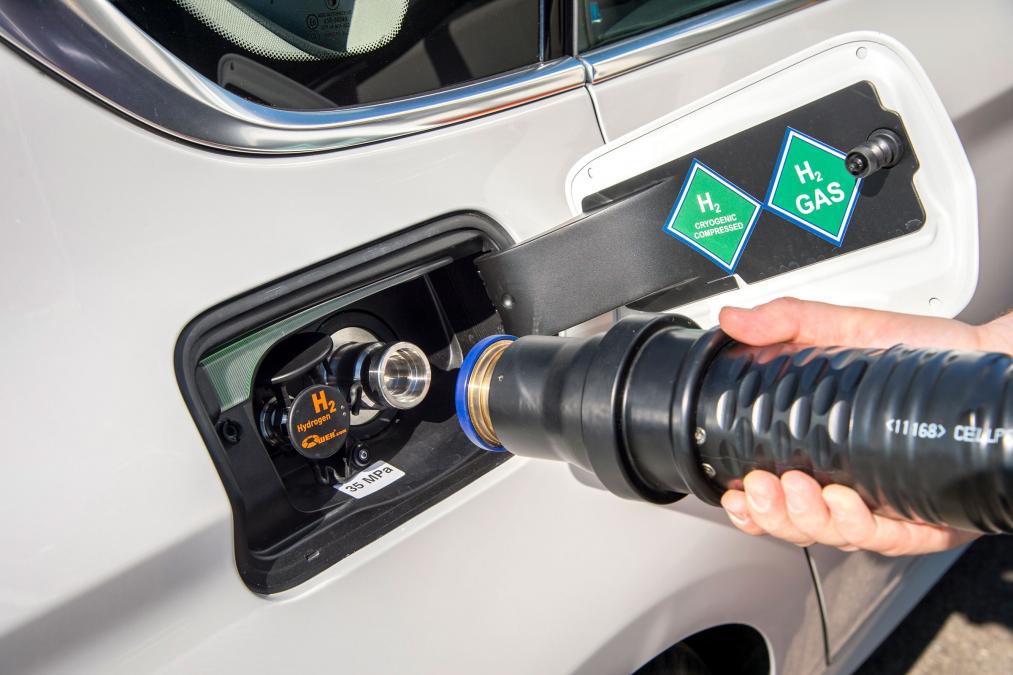 It’s worth pointing out that this 5 GT FCEV is a very early stages prototype. BMW says it hopes to have a “technologically mature, customer-ready car” sometime beyond 2020, so it’s not mere months from making the showrooms. However, development on this FCEV has been taking place for years already; indeed, at the event where we drove this 5 Series was BMW’s former FCEV development mule, an evillooking machine that was like a cross between an i8 and the Batmobile.

So what is the FCEV like? Well, in terms of the passenger space, it’s like a normal 5 Series GT. Neither the fuel cell nor hydrogen tank impinge on the cabin, although BMW elected not to show us what the FCEV’s boot capacity was like, given the electric motor and battery pack are located at the rear. Nothing much is different about the dash either, save for a bespoke digital display screen cut into the centre console that’s purely for R&D purposes and which will not make it into production, while the instrument cluster features a hydrogen fuel gauge in place of the normal petrol/diesel item. So it’s all very familiar fare in here, making the ensuing drive feel more like a ‘regular’ car.

Despite being a long way from finished, this FCEV is promising. Like any EV, the Five surges off the line with barely a whirr from the electric motor at the rear. In this application, the motor is good for 245hp – BMW deigned not to mention its perhaps more relevant torque figure – and while the hydrogen kit adds about 100kg to the 5 GT’s kerb weight, the electric shunt is enough to make the car feel rapid. The ride and handling felt fine too, although we didn’t do many miles behind the wheel of the prototype to try and throw it around a bit to explore the dynamics.

Were there any issues? Well, there was a noticeable clunk as the two-speed reduction gear switched into its longer-legged ratio at around 56mph, while a loud whooshing noise was audible underneath the car. That, apparently, is a compressor that forces air into the fuel cell but BMW’s engineers assured us that the acoustic damping of any forthcoming FCEV production model would be way in advance of the 5 Series GT’s current setup. But apart from that, it was a civilised vehicle to cruise around in.

All in all, given that the FCEV promises all the benefits of EV driving with none of the drawbacks, even this far from the showroom the 5 Series GT is impressive. As with EVs, however, the key barrier to success is going to be the support infrastructure. Refuelling the car currently takes around five minutes in a process similar to dropping either petrol or diesel into your daily driver, with BMW stating that before 2020 the time will be cut to be comparable with current refuelling methods.

But it’s not the time to fill the tanks that’s the issue; more, where will we fill them? Hydrogen filling stations are thin on the ground but apparently some key markets – California (aiming for 100 stations), Germany (400), Japan (800) and South Korea (500) – will have more sites; the targets all set for between 2020 and 2030. If that sort of thing happens here in the UK, then the marriage of guilt-free hydrogen and the EV drivetrain could finally spell the end of fossil fuel cars. Whether that’s a good or a bad thing depends purely on your environmental conscience. 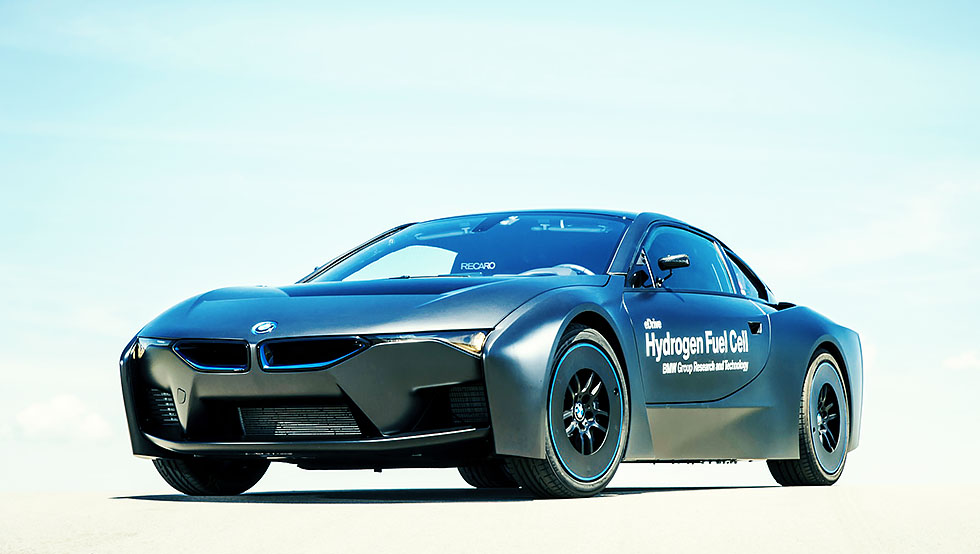 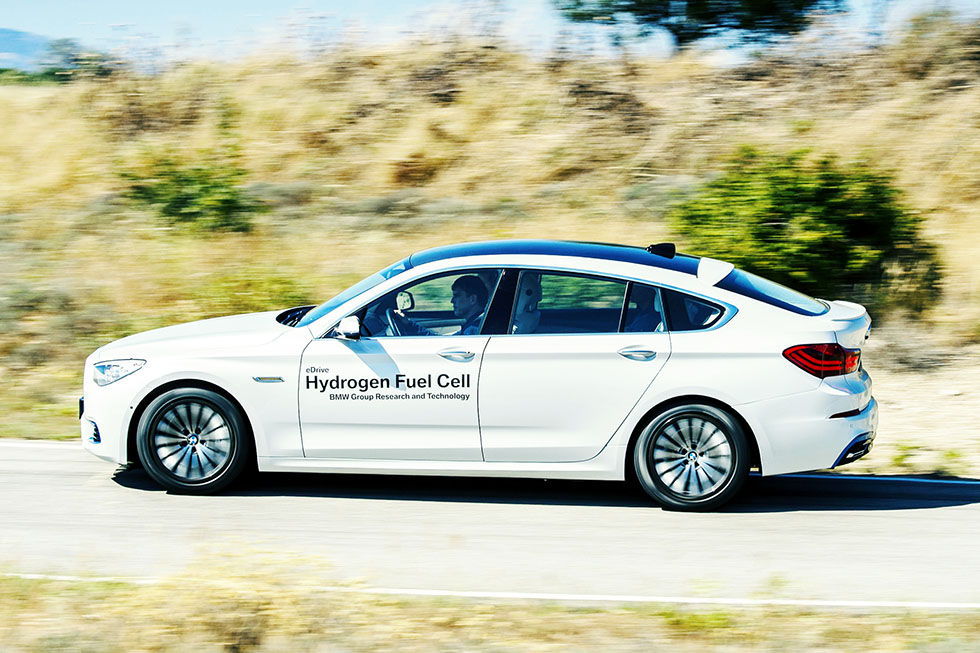 ECONOMY: Undisclosed – predicted range of either 280 or 438 miles

PRICE: Not yet confirmed for production