Biggest retromobile is best yet 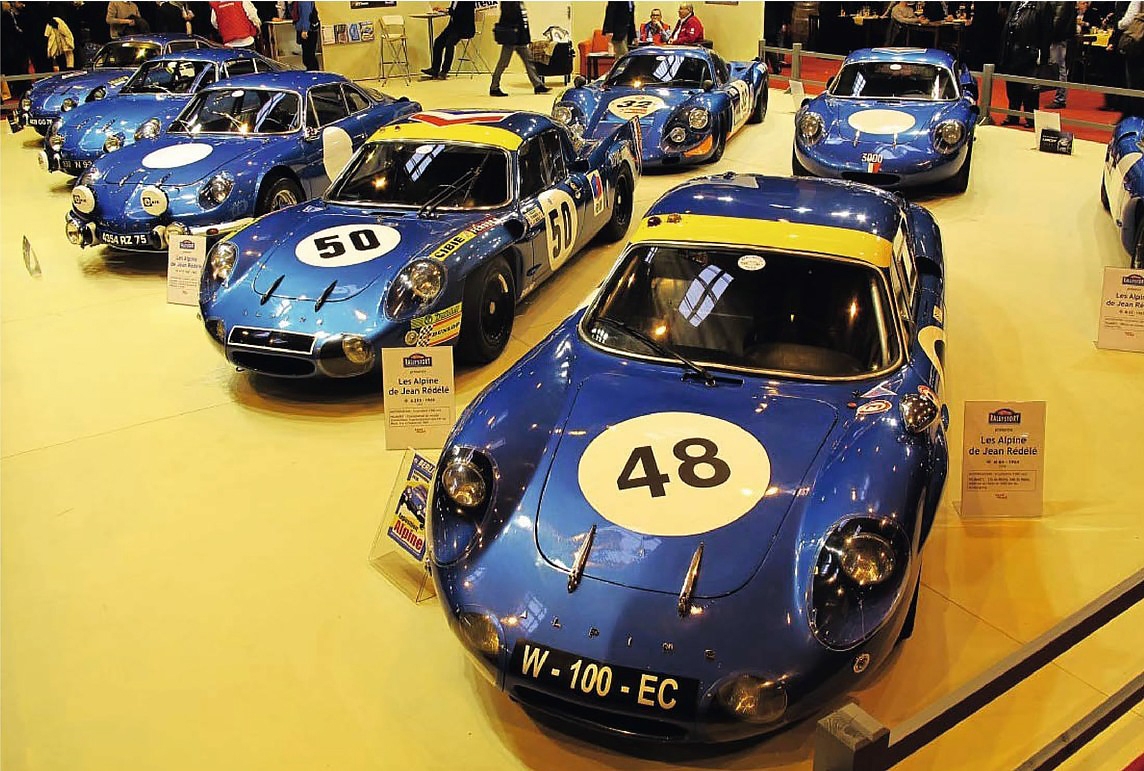 Regulars to France’s premier indoor show cited the 39th Retromobile as the finest for years. Revitalised in a new single hall, the Parisian event had the space to display its diverse attractions to 90,000 visitors from 5-9 February, including tributes to Alpine founder Jean Redele and Thierry Sabine, the inspirational creator of the Paris-Dakar challenge.

The show opened in style when director Francois Melcion rode an elephant through the aisles to promote the magnificent set of Maharaja cars gathered from all corners of the globe. Among the coachbuilt beauties set among palm trees was the ex-Rajah of Koywara Isotta-Fraschini Tipo 8A, which he drove around Edinburgh as a student in 1929. Previous owners of this Cesare Sala-bodied beauty include Bollywood director Muzaf- fer Ali and Led Zeppelin manager Peter Grant. Evert Louwman is a great Retro supporter and loaned several stars, including the Brooke Swan Car built for the Maharaja of Nabha plus the electric Cygnet.

Demonstrations are a popular feature of the show, and this year

two aero-engined Land Speed Record titans – the 27-litre Babs and ex-Malcolm Campbell 350hp Sunbeam with rebuilt 18.3-litre Manitou V12 – were fired up each day to the delight of the crowds.

Taking centre stage was a dramatic Great War diorama manned by enthusiasts in period uniforms. The convoy represented the ‘Sacred Road’ between Bar le Due and Verdun, featuring a remarkable set of trucks, tanks and ‘Taxis de la Marne’. In 1914, General Gallieni requisitioned 600 taxis from the Paris streets to transport troops to the front.

Renault produced an impressive display celebrating 50 years of the R8 Gordini and 30 of the Espace, the latter led by the V8-powered 1959 Project 900 MPV prototype and the fantastic Espace FI, while Citroen dug out the ’56 Coccinelle developed by Andre Lefebvre.

Racing success was the theme of a stylish Mercedes stand, with 1914 18/100 heralding the celebrations this summer in Lyon when three surviving team cars – including two from America – will retrace Christian Lautenschlager’s victorious route. Lining up alongside were the ex-Juan Manuel Fangio ’54 Reims- winning W196R streamliner and a 1989 Sauber-Mercedes C9, which was reunited with visiting Le Mans winner Jochen Mass.

There was no official Maserati centenary display, but among the dealers celebrating the work of the founding brothers was La Galerie des Damiers with a unique ’54 Osca MT4 streamliner that brought back memories for visitor Alfieri Maserati: “I recall seeing this being built as a boy in our workshop. We had no wind tunnel but at Bonneville, with Indy driver Tony Bettenhausen, we took 18 records beating Porsche and MG.”

Following his superb Citroen DS display in 2013, Lukas Huni gathered a stunning group of 14 immaculate Lancias including the ’54 Targa Florio-winning D24. Yet Franco Meiners upstaged them all with a Fiat Bartoletti transporter carrying a fabulous Ferrari 330 P4. Chassis 0858 has recently been turned back from Can-Am Spider to 1967 Le Mans spec. “We’ve put the roof back on, just as Parkes and Scarfiotti drove it,” said Mieners.

Bucciali had a tradition of Paris showstoppers, which Claudio Thiry lived up to with his newly completed recreation of the long- lost TAV 30 Cabriolet. Based on a Cord L29 chassis found in Finland, it has taken specialist Jean-Luc Bonfoy four years to complete.

Among the many highlights of the automobilia area was Jean-Claude Baudier’s 1:43 Bonneville scene, inspired by Capt George Eyston’s 345mph Thunderbolt. 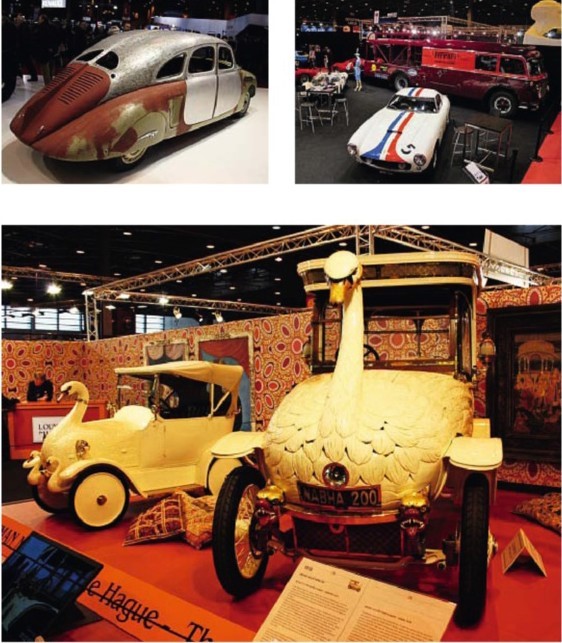 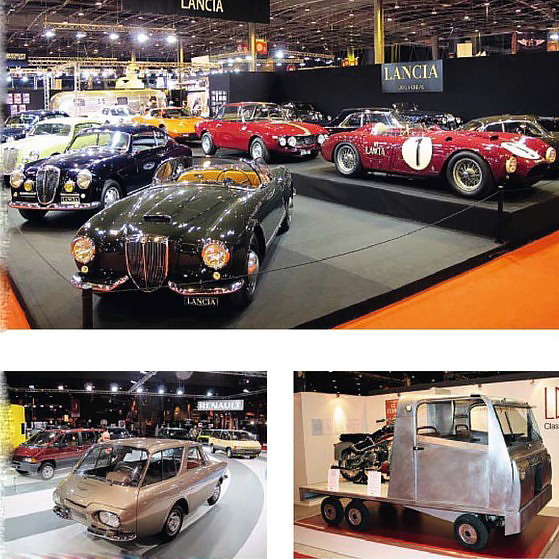 Are you enjoying Retromobile?

It’s a fantastic show. I never knew that Maserati built motorcycles but discovered one here.

Any other highlights? It’s great to meet up with old friends such as Paul Belmondo, who I hadn’t seen since we raced together with TWR at Le Mans.

How’s your 280SL? I’ve just had it serviced at Mercedes-Benz Classic butl now need a 300SE convertible because my wife and son fight for the passenger seat.

The 300SLR on the Mille Miglia.

This year’s most poignant display marked a century since the outbreak of the First World War. There were some amazing exhibits, from the 1912 De Dion-Bouton V8 munitions carrier to a pair of Renault FT light tanks, but for me the most fascinating machine was a 1913 Latil TAR (Tracteurd’Artillerie Roulant) brought along by Fondation Berliet. Some 3000 of these massive 7.5-litre, 40hp artillery lorries were built to tackle the worst conditions the warcould throw at them, with high ground clearance, twin tyres plus, incredibly, four-wheel drive and four-wheel steering. AC

Alfas were everywhere, including 43 diverse lots consigned by Artcurial from a private Italian collection (see Auctions), but a timewarp, little-seen 1955 1900SS really pulled the crowds. One of three built, this dramatic Disco Volante-style coupe was previously part of the Mario Righini collection, and is often confused with the ex-Eva Peron 6C-3000CM. Its distinctive styling by Gianpaolo Boano included a split rear screen, years ahead of the Corvette Sting Ray. The short-lived Torinese corrozzerio later engineered the Giulietta Sprint before closing in 1957. MW

Retro is perhaps the best European show for the’never seen one of those before’ effect, and for an MG owner it was exciting to spot a new variant of the marque with the Swiss Car Register. This beautiful 1939 WA dhc is far more rakish than the upright factory model, with sleeklines andelegant chrome detailing courtesy of Basel-based drophead specialist Reinbolt & Christe. A true coachbuilder, R&C built around 300 cars from 1900-’59,havingevolved from making bodies forhorse-drawn vehicles-Jacques Reinbolt was alacquerer and Johann Martin Christe a saddler! AC

Wandering among the French carclubs late on Wednesdayis a joy because there’s always a wonderful selection of pre-warsports cars, such as BNC, Bugatti, Lombard, Salmson and Rally. The star this year was an intriguing 1932 Amilcar Le Mans car modified by Clement-Auguste Martin, a La Garenne agent who cleared out the factory racing department. Based on a CO competition chassis, but with its troublesome dohc straight- six replaced by a re-engineered ‘four’, itfinished eighth at the 24 Hours with Martin teamed with Auguste Bodoignet. MW