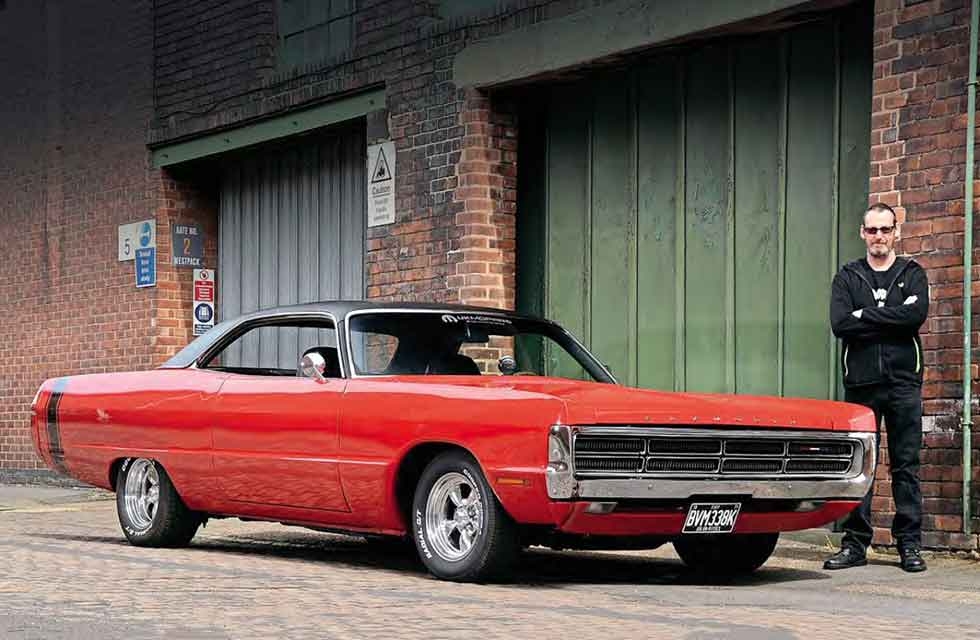 Are you one of those Classic American readers that change their cars as often as their underpants? Or is it a case of ‘until death us do part’? That’s certainly the case with Ed Jackson, who’s had this eye-catching Plymouth for more than 30 years and made the car all his own! Words and photography: Jon Cass.

When we think of ongoing projects, a timespan of six months to a few years seems quite typical. Everyone wants to work at a pace they’re happy with − after all, a full-time job and everyday life often results in that stash of parts and a stripped shell filling your garage for longer than was intended and all too soon the summer sun has begun to disappear. Ed Jackson was in no particular rush to complete his stunning ’71 Plymouth Fury Sport. In fact, when he first bought it, he only really intended to keep it a year or so, spending as little money on it as possible to keep it running. We should point out this was back in 1988, so you could say those initial plans disappeared some time ago, probably while Jive Bunny was still in the charts.

“YOU CAN’T MISTAKE THE BURLY AND IMPOSING LOOKS OF THE ’71 PLYMOUTH SPORT FURY, WITH ITS ROUNDED FUSELAGE STYLING AND HIDDEN HEADLAMPS…”

Back in 1988, Ed was driving around in his second car, a Jaguar XJ6 which had replaced a Mk II Escort. For those who can’t recall the late Eighties, insurance was still relatively cheap, even for younger drivers to insure large powerful cars, so a 20-something smoking around in an XJ6 certainly wasn’t out of the ordinary.

“The XJ was one of my favourite cars of all time and I had little interest in American cars, even though there were plenty of them on the road in the UK at the time,” Ed recalls. “I did have two friends who drove Yanks though, one had an Oldsmobile Cutlass and the other owned a ’74 Impala.”

Ed’s opinion of American cars would soon change, however, when one day after a car meet, Dave, who owned the Impala, suggested Ed drive it back, “It was such fun to drive and seeing people’s reactions as you went past soon became very addictive. I decided I had to buy something similar and keep it for a year or two, just to get the idea out of my system.” Ed wasn’t too fussed about which particular make or model, it just had to be a huge Seventies slab, like you saw in all the TV shows and films.

The search began and even though there were more Seventies American cars on our roads back then, don’t forget this was pre-internet days so the Exchange & Mart soon became part of Ed’s staple diet. “I couldn’t find anything that fitted the bill in there, looked okay or fitted my modest budget,” Ed laughs. “My brother then showed me an advert with a small black and white photo soon after I got back from holiday which read ‘Plymouth, 60s styling, bring spare underpants.’ It was exactly what I was looking for.” Ed took a trip over to Halifax in West Yorkshire with his best mate Alex Clarke to view the ‘71 Sport Fury and after a quick test drive, he knew this was the car for him. “I offered £200 less than the asking price and it was a very long week before I could pick it up.”

Hot car… but not in a good way

Although the Fury was driveable and generally sound, there was a plethora of holes in the bodywork, the chrome was missing, and the side markers had been removed and filled. The rear quarter had been dented where someone had reversed it into a wall and the interior was little better, showing its age and the seats were falling apart too. At least the 318cu in V8 was the correct spec, though the original engine had long since departed in favour of a similar sized block from a Barracuda, and none of the gauges had been wired up. “The first week I had it, the radiator gradually disintegrated, which was less than ideal, as by now this was my only car and I had a 30-mile round trip to work each day,” Ed remembers. “I was blanking off the split radiator veins twice a day and within a couple of days, the water was pouring out as fast as I could refill it. I still have no idea how the car got me home or how hot it got, as the temperature gauge didn’t work either!”

Changing the radiator was obviously first priority and, as Ed was on a tight budget, a Rover V8 radiator was slotted in to replace the tired original. “I renewed the front shocks with a pair from KYB as those on the car were so worn out, the car hit the bump stops every time there was a dip in the road,” Ed continues. “Rear air shocks followed, along with retempered leaf springs and I bodged the holes in the bodywork with filler so it at least looked a little better.”

In 1992, while the Plymouth was parked at the side of the road, a driver crashed straight into the back of it. “The rear bumper didn’t move, but the rear valance and side panel were both damaged,” Ed remembers. “The other car came off much worse and bounced back around eight feet, their suspension had collapsed and the radiator was left on top of the engine.” Despite its ordeal, the Plymouth was still far from a write-off and Ed decided to have the bodywork professionally repaired and resprayed in Seat Tornado Red. Prior to the accident, the exterior was painted black and had been green originally. The car was still missing various trim items such as the rain gutter and vinyl roof.

Roll on a couple more years, and Ed decided to replace the 318 motor with a big block, partly for the whole experience if nothing else. Unable to find a suitable 440, Ed settled for a 400cu in V8 from a Chrysler Cordoba: “I bought the whole car in a crashed condition for the running gear and ended up using the seats in the Fury for over 20 years too,” he smiles. “I rebuilt the 400 and fitted a mild competition cam, Edelbrock inlet manifold and 750 Holley carb along with some Thrush headers, these were tricky to fit due to the C body’s torsion bars.”

The 400 was installed and running just in time for the ’94 Mopar Nats, and Ed took the decision to set off on the considerable distance straight down to Santa Pod to test it out. “I’d retained the previous Rover V8 radiator, which struggled to cope with cooling the 400 big block and the engine began to get very hot every time I dropped below 60mph on the motorway – the water in the overflow bottle was literally boiling,” he adds. “I soon replaced the Rover radiator with the original Plymouth radiator which I had recored.” The transmission had also been rebuilt and fitted with Kevlar bands by Martin Lowe Transmissions and new brakes and calipers supplied by Rodley Motors (01274 688 968/www.rodleymotors.co.uk).

By now, Ed was living in a flat with limited parking, so any work being carried out on the car was being undertaken on his parents’ drive. “By the late Nineties the bodywork was really beginning to show its age,” he recalls. “In 1997 I decided to buy a house and build a garage, so I could work on the Fury properly. Unfortunately, not only did the house need work, it took me a further three years to build a two-storey garage to house the Plymouth!”

Ed expected the restoration work to take a further three years, but as he began to delve deeper into the grim depths of the Fury’s bodywork, he soon realised that timescale would be a lot longer. “I’d never undertaken any car restoration before and began by making a badly needed rear quarter panel and then gradually worked my way around the car.”

Once the panelwork was near completion, Ed was put in touch with a specialist named Tony who carried out some of the small but tricky repairs, particularly around the front and rear windows, before respraying the shell in Honda Milano Red, a colour that suits the boxy Fury styling perfectly. A set of Torq Thrust II wheels from American Racing, along with a fresh vinyl roof, complete the exterior look Ed had spent so long waiting for; however, the hidden headlamps remain his favourite feature.

The Cordoba seats had served the Fury well for the past two decades, but the original Plymouth seats hadn’t been disposed of and Ed was keen to have these retrimmed and refitted, instead of them just taking up space in his loft. These have been recovered by MB Trims, while a fresh headlining came courtesy of Bielawskis in Sheffield (www.bielawskissheffieldtrimming.co.uk/0114 244 8033). “I resprayed the dash and centre console black and fabricated door bases, which were then trimmed by Paula Norcliffe who managed to replicate the blown vinyl effect,” Ed points out. “These have been finished off with wood-effect trim from Detroit Motor Industries and chrome trim which I fitted myself.”

It’s been a mighty long wait, and the Fury isn’t finished quite yet. Ideally, Ed would still like that 440 or at least rebuild the 400, but the car is now at a showable standard at last. “I recently bought an 8.75 back axle with a Suregrip diff,” Ed adds,” and this should handle any future engine upgrade.” And there could be plenty more upgrades to come as the Plymouth has remained by Ed’s side throughout the good times, and the not so good, most of his adult life. There’s no way now he’d ever let this Fury go!

You can’t mistake the burly and imposing looks of the ’71 Plymouth Sport Fury, with its rounded fuselage styling and hidden headlamps behind that wide chrome grille. They’re surprisingly rare too with a production run of only 3912, giving this model an air of exclusivity, especially in the UK. The one to have was the 440cu in big-block V8 with a single four-barrel carb, good for 350bhp and if that wasn’t enough, Plymouth’s six-pack was optional, providing an extra 40 horses should you need it. All with the benefits of full-size car room and ride, while packing a Pentastar punch!

Norcliffe, who replicated the blown vinyl effect. Finished with wood finish and chrome strip by Ed.

Retrimmed original seats. Wood rimmed steering wheel. Ed’s owned the Fury for more than 30 years. … but ideally Ed would like to fit a 440 motor. Engine is a 400cu in V8 from a Cordoba…