There are days when it can feel as if Aston Martin is never out of the news. DB11, Valkyrie, new showrooms, a new factory, submarines, final-edition Vanquish S models and Formula 1 – every news sector covered, no sleep for the product, marketing and PR men and women. 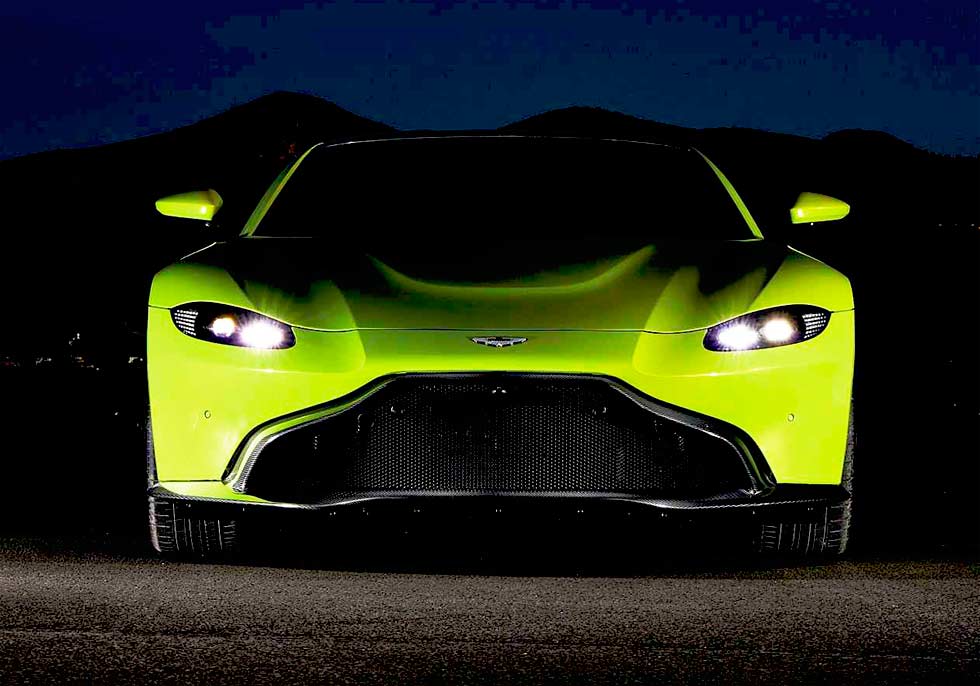 The arrival of the next Vantage is a different story, though. A much bigger story. This is Aston Martin’s most important new car for years. The outgoing version sold over 16,000 examples during its 11-year life, more than any Aston that had gone before and a number that is only expected to be eclipsed by the DBX SUV and this, the all-new twin-turbocharged V8 Aston Martin Vantage.

Evolution and revolution have been combined in the development of the new Vantage. With a design team led by Marek Reichman, the chassis development spearheaded by Matt Becker, and the whole project overseen by the enigmatic and energetic CEO Andy Palmer, this Vantage is also the first all-new Aston Martin that the latter two have overseen from inception. ‘With everything that Aston Martin has on its agenda at the moment and going forward, the Vantage is what I am looking forward to the most,’ Palmer told evo. ‘It’s my first Aston Martin. The first car I’ve been involved with from the beginning.’

It’s quite a car, too. Its platform and core structure is a further development of the DB11’s aluminium architecture, the replacement for the venerable VH platform that served Aston so well for so long. But the Vantage is more than simply a re-bodied DB11 – 70 per cent of its structural components are new. an increase in rigidity and weight efficiency has provided Becker with the blank canvas required to hone the Vantage’s handling.

With new front and rear subframes, And a focus on providing better balance, the latter solid-mounted, there are few like-for-like carry-over parts. Everything hanging off the structure is new, from bushings to springs and dampers – the latter the latest development of Aston’s adaptive system with Skyhook technology – to brake discs and calipers and, of course, the engine and gearbox.

This new Vantage is the first Aston Martin to be powered by a third-party motor since the Jaguar-engined DB7. As with every front-engined sports coupe worth its salt today, the AMG-sourced 4-litre, twin-turbo V8 is positioned as far back in the engine bay as possible.

While AM’s collaboration with Mercedes hasn’t allowed it to ask the engineers at Affalterbach to open the V8 up and add trick cylinder heads or a set of lighter pistons, there are bespoke induction and exhaust systems and the engine management has been reprogrammed accordingly. All in, the results are peak outputs of 503bhp and 505lb ft of torque, a claimed 0-62mph time of 3.7sec and a 195mph maximum.

Power is sent to the rear wheels only via an eight-speed ZF automatic gearbox and an electronically managed limitedslip differential – a first for Aston Martin. Linked to the ESP, the e-diff can go from fully open to 100 per cent locked as required. At higher speeds, Aston claims it provides an even finer rate of response to improve both straight-line stability and cornering agility. Torque vectoring is also standard, as is speed-sensitive electric power steering.

While the source of its engine will be considered a big departure for Aston Martin, the new Vantage’s styling, both inside and out, provides an equally strong topic of conversation. In essence it blends the look of the DB10 (the model created for the James Bond movie Spectre, and of which just ten examples were made) with the aggression of the Vulcan – the short-run series of track-only V12 hypercars. ‘The connection with the DB10 is straightforward,’ explains Reichman.

‘When the Broccoli family came to Gaydon to discuss a new car for Spectre we showed them a handful of products that would be timely for the film, and we agreed on a particular model. But as they were leaving they saw the early Vantage sketches, asked what it was and if it could be ready for the film.

‘This was back in 2014 and a production car wasn’t possible, so the DB10 was created. It didn’t detract from the Vantage’s final design; if anything, it provided an additional design phase as we got to see a finished, running prototype on the big screen nearly 18 months before we signed-off the car.’

The new Vantage has a very aggressive design. Its Vulcan influence is unashamedly clear to see from nose to tail, from the trademark AM grille to the function-first diffuser that dominates beneath the rear bumper. The car delivers its aerodynamic requirements via its front splitter, a complex series of underfloor channels that manage both airflow and cooling, and that diffuser.

Side gills manage the air pressure in the front wheelarches, and the upswept rear bootlid is a nod to the previous Vantage. This is also the first series-production Aston Martin to generate downforce.

Longer, wider and taller than the outgoing car, the new Vantage disguises its increased dimensions well, although having only seen it within the confines of a design studio we’ll reserve judgement on how it sits on the road until we’ve seen it surrounded by its rivals. In terms of weight, Aston is currently revealing only a dry weight (with lightweight options fitted) of 1530kg – add at least 75kg to that figure to account for the fluids.

The cabin architecture and design is as focused as the exterior. You sit low, in a seat that feels as if it is located right by the rear axle. There’s more interior space than before, despite a wide transmission tunnel that features a number of controls familiar to anyone who has recently been in an AMG-badged Mercedes-Benz. There are bespoke rotary and toggle switches, though, with tactile functionality, and the instruments sit within three separate binnacles – perhaps the least successful element of the interior’s design.

‘The new Vantage’s styling, both inside and out, provides a strong topic of conversation’