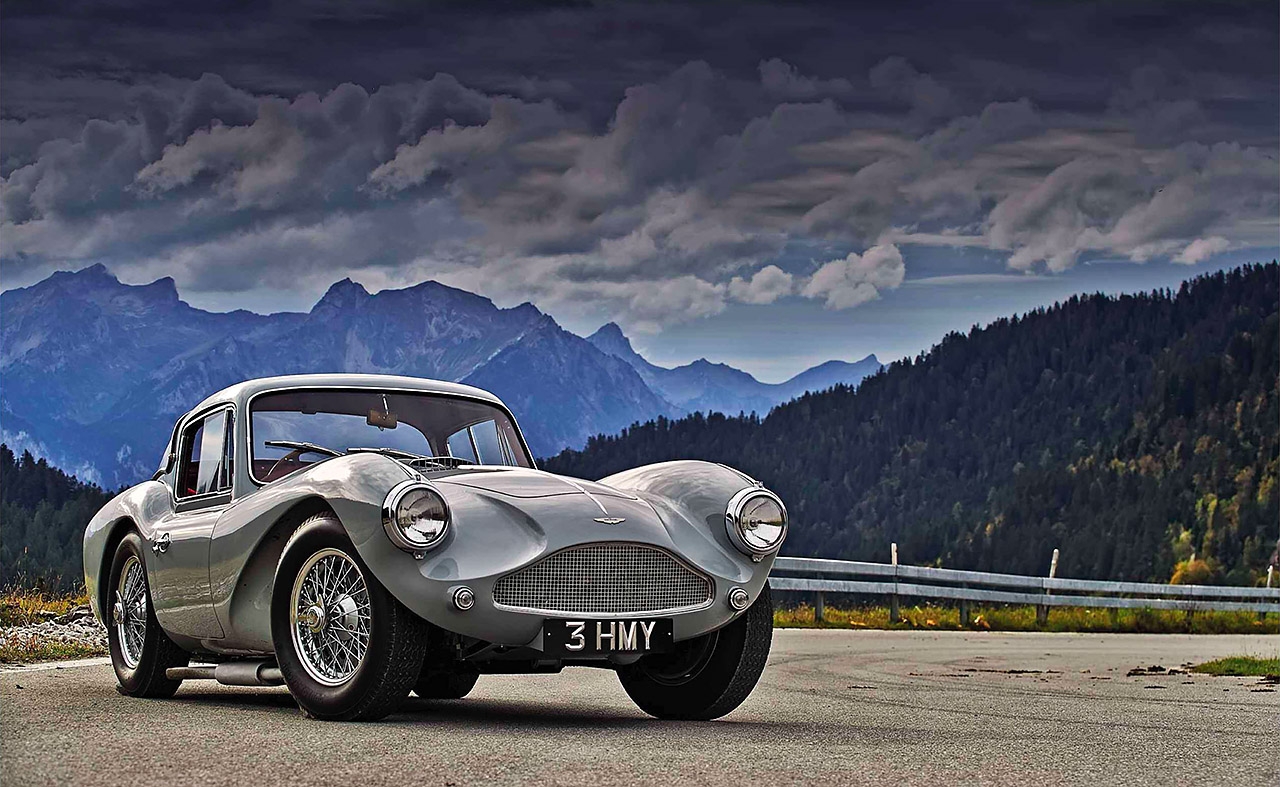 Think Julie Christie, Kate Beckinsale or Rosamund Pike in their early screen roles and how they instantly stirred the senses. That’s the sort of reaction, I reckon, that the DB3S elicited when it made its debut. Add a little Audrey Hepburn, Charlotte Rampling and Saffron Burrows, apply the thought again and one has the Coupe, a classical English rose in every sense. But while there are many other beautiful women, the DB3S Coupe is almost peerless. Just three were ever built, and the fact that these achingly attractive Astons existed at all is, perhaps, surprising.

Although highly effective and successful in international racing, the DB3S, as with all competition Aston Martins of the 1950s, lacked ultimate outright speed against invariably larger-engined rivals. More often than not the deficit was offset by a combination of superior cornering ability and aerodynamic efficiency, but where it really took its toll was on longer straights such as Mulsanne at Le Mans; and winning the French 24-hour race was company boss David Brown’s main priority The excellent Willie Watson-designed LB6 twin-cam had already been enlarged from 2580cc to its limit of 2922cc, and though more and more power would be eked from it until the decade’s end, producing ever more slippery bodies was always high on Aston’s racing agenda.

Frank Feeley, the Feltham works’ gifted body stylist who had penned the DB2 and the DB3 sports-racer, had first experimented with a closed racing body by fitting a pretty hardtop to the DB3 in 1953 in time for that year’s Le Mans; its effectiveness was never known as DB3/1’s differential failed, resulting in retirement after just ten laps; the hardtop was never used again, although its hatchback reappeared on the DB2/4 that October.

By then the lighter, faster and more compact DB3S had replaced the DB3 but the perennial problem remained. This time in the quest for more top speed Feeley produced a one-piece coupe body. To maximise the predicted increase in aero efficiency, two cars – the newly built DB3S/6 and DB3S/7 – were dispatched in spring 1954 to Brooklands, where many hours in the Vickers Aviation wind tunnel, with assistance from the company’s aerodynamicists, showed a superior drag co-efficient to the roadster’s.

The prolonged exercise scuppered race manager John Wyer’s plan to test-run both Astons in the Mille Miglia in early May and the Coupe made their debut at Silverstone’s BRDC meet just under a fortnight later. In closed form, however, the ‘3Ss handled less well and were markedly less stable. Although Roy Salvadori took DB3S/6 to 7th/1st in class and Graham Whitehead in DB3S/7 finished 12th/3rd, this fell well below expectations after the 192bhp DB3S’s dominant performance in 1953 – it won every race entered, bar Le Maas, in its debut season – and despite the Coupes sporting new 12-plug cylinder heads and an extra 43bhp. 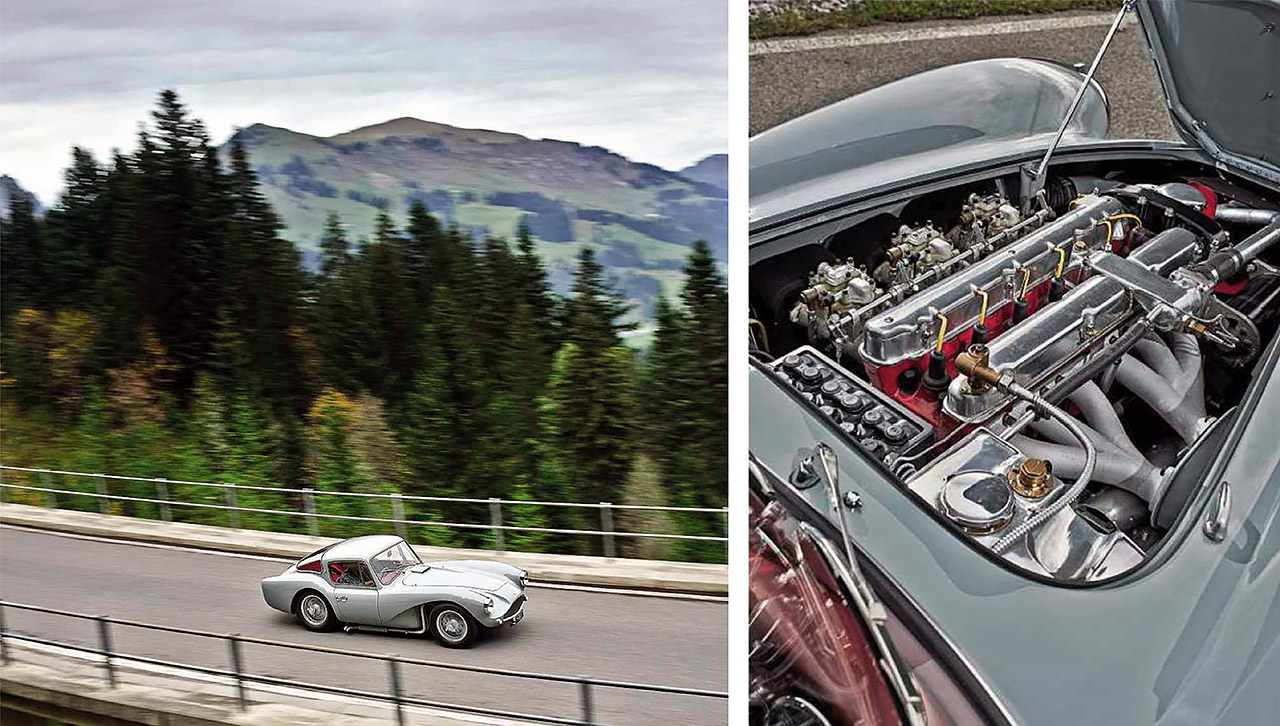 Above and left. Fins on the rear wings were carried over from the original works racers. Cockpit (left) is a snug fit but beautifully appointed: the production car was conceived with fast touring very much in mind.

Below and right. Frpshly rebuilt by RS Williams. DB3S/19’s 2.9-litre ‘VB6’ straight-six with triple Weber 40DCOs has shown 211bhp at 5500rprn on the dyno. Coupe bodywork was designed to increase the DB3S’s top speed.

At the 1954 Le Mans, the extent of the Coupes’ instability was manifest: both cars were alarmingly unstable at high speed, suffering rear-end lift and each crashing at virtually the same spot where they had been worryingly airborne over the hump into White House corner. Severely mangled, DB3S/6 and ‘7 were rebuilt with roadster bodies, the closed coachwork never being used again in competition by the works. In fact, the Vickers aerodynamicists had expressed concern about too much air getting beneath the Coupe but it wasn’t acted upon or, more probably, fully understood at that time.

None of this stood in the way of a production DB3S Coupe becoming available at the 1955 Earls Court Motor Show. By this time, Feeley had subtly redesigned the DB3S roadster with notably sleeker lines by smoothing out its contours and using a mesh rather than ‘egg-box’ grille, and a 180bhp (later 210bhp) production version of the car, only differing from that year’s works cars in having the single rather than twin-plug head, had gone on sale. The restyled car was undoubtedly Feeley’s ultimate masterpiece, a timeless beauty that remains universally acknowledged as one of the most stunning and elegant sports-racing cars of its era. The similarly smoothed Coupe – though retaining the original works cars’ rear wing ‘fins’ – was now fully trimmed, with a more upright windscreen, a smaller fuel tank allowing a decent size luggage area behind the seats, and a ‘boot’ largely filled with the 28V4-gallon fuel tank and spare wheel. Just three were produced before all DB3S production ceased the following year. David Brown, who had wanted a special GT and instigated its build, received the first, chassis DB3S/120 (with sunroof); subsequent owners of ‘120 included Jean Bloxham (now Salmon) who also raced the car. DB3S/113 was supplied to the Hon Max Aitken, who soon had conventional rather than scalloped front wheelarches fitted, together with small rear wheel spats and chrome side-strips.

And then there was DB3S/119, the car you see here. Like its siblings, ‘119 was built in 1955, although it wasn’t registered until August 24 the following year, four days before Mr RD Ropner became its first owner. It was painted in Battleship Grey with a red interior, the only optional extra listed being a set of Avon racing tyres and total cost was a then very considerable £3207 – £1116 more than the roadster – plus £1605 purchase tax. Subsequently ‘119 passed through several owners, including Keith Schellenberg, Nigel Dawes, who had it painted black with red wheels and grille, Jim Freeman, long-time AMOC USA chairman who briefly raced it in the early 1980s, and Victor Gauntlett, after whom Simon Draper became its penultimate keeper in mid-1991 (and removed its non-original roll- cage). With ‘113 having been re-bodied as a roadster in the early 2000s, the surviving two Coupes are even rarer and among the most sought-after of all road-going Astons ever built.

DB3S/119’s current collector-owner bought the Aston, still with the original registration 3 HMY, from Simon in late 2009. A painstaking restoration over the next five years by DB3S/Aston specialist Rex J Woodgate included a newly fabricated body by ASR Motor Body Engineering – such was the shocking state under the skin of the (retained) original – painted in the correct Battleship Grey and re-trimmed in red with contrasting grey headlining and sun visors. Finally, the engine and gearbox were rebuilt and refitted by RS Williams, prior to extensive road-testing and transportation to the owner’s Alpine hideaway. Which is where we join it.

When seated snugly in the comfortable bucket seat behind the large wood-rimmed, alloy steering wheel, the immediate impression is of fantastic all-round forward vision afforded by the large, coach-like wraparound windscreen, those lovely, high- sculpted Gothic-style front wings pointing the way ahead; rear vision through the large screen is almost on a par. Compact and cosy, with limited headroom for over six-footers in the narrow cockpit, the interior, unlike that of the more rudimentary racers, is beautifully trimmed in leather, including the front and rear pillars, with deep-pile carpeting covering the footwell and luggage area. The lovely sliding side-windows and quarter-lights look just right, as do the neat bracing struts between, the tiny passenger door lock, the pretty doorhandles inside

and out and the stylish strakes that meet the headlamps on top of the front wings, all beautifully chromed and exuding traditional Aston Martin craftsmanship. Neatly laid-out switches and dials include matching 160mph speedometer and 6000rpm rev-counter, the latter arranged so that the important 5000- 6000 segment – there is no redline to mark the 5600/5700 change-point – is in the uppermost line of vision.

Once warm, the freshly RSW-rebuilt engine pulls strongly from 2000rpm and will spin eagerly to 5500 and its 211bhp peak output, and beyond. Throttle response is instantaneous as the triple Webers snort air – Autosport’s John Bolster recorded an impressive 0-60mph time of 6.6sec, a 0-100mph/standing-start quarter-mile of 14.4 seconds and a 140mph maximum in the 2200lb (238lb more than the roadster) Coupe – accompanied by a glorious snarl from the twin exhaust tail-pipes exiting just below the driver’s door, ever-present through the side windows (which rattle in protest on severe bumps).

The perfectly placed short-throw lever for the DB S430 gearbox is satisfyingly light and precise in engagement. The lack of synchro’ on the fairly high-geared first of four ratios requires double-declutching to maintain pace on tight uphill Alpine hairpins; the upper three are sufficiently close to make best use of the 2.9-litre motor, and although the clutch is typically strong for a competition unit, with a short movement, its bite doesn’t snatch, allowing smooth, fast changes. Below 2000rpm in too high a ratio the Webers will splutter on too much throttle before clearing their throats, at which point the otherwise very tractable six-cylinder takes on real urgency. The torque curve peaks at 222lb ft at 4500rpm, though over 210lb ft is on hand all the way from 3500rpm to 5000rpm. 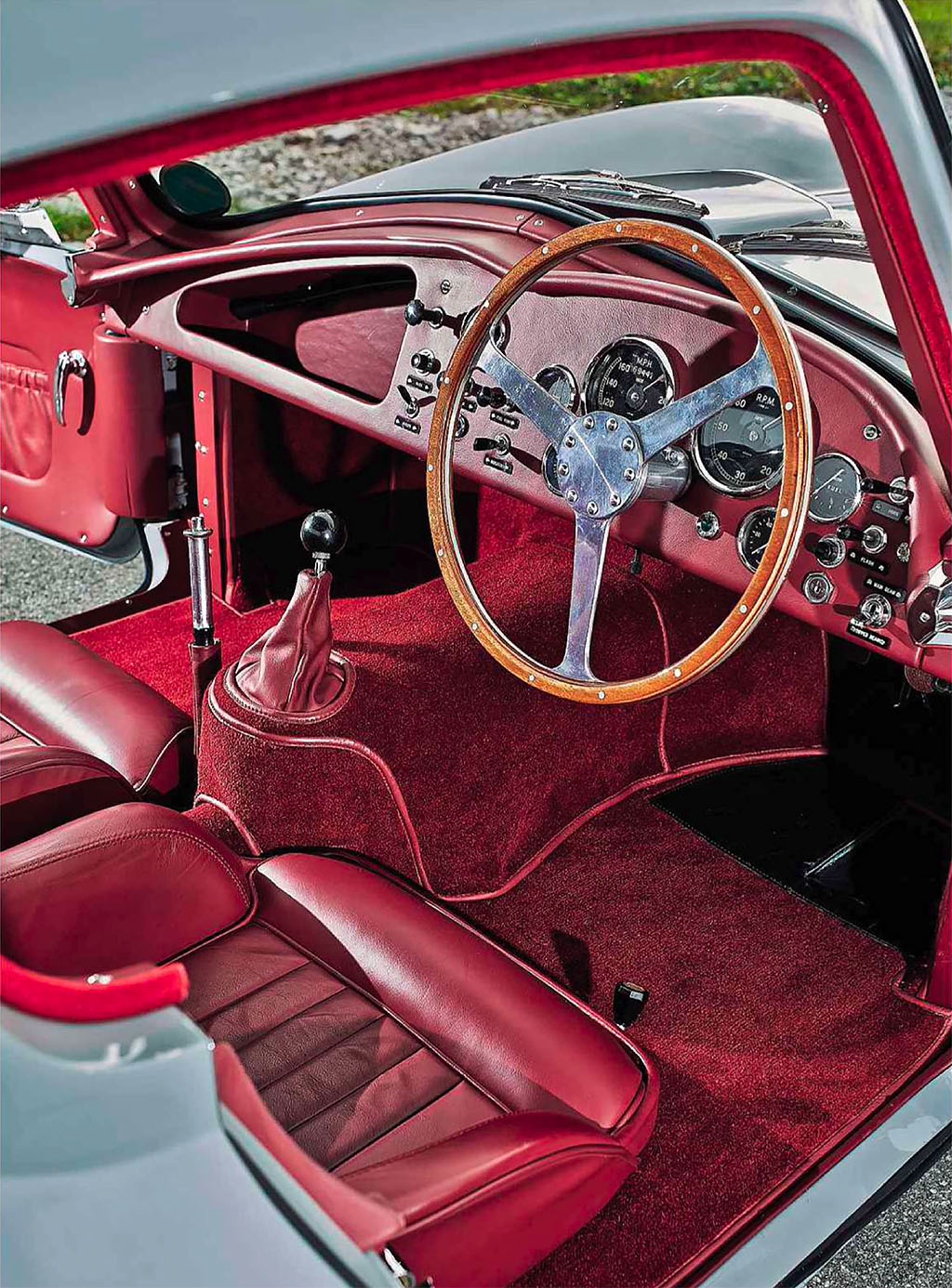 The ride is surprisingly supple, particularly given the race rubber and suspension, but not in any way at the expense of roadholding. Having been fortunate to race DB3S/110 a few years ago, I find it just as I remember. Turn-in is precise, and feedback through the sensitive, high-geared steering is excellent with every surface undulation felt, though the Dunlops, abetted by the Aston’s relatively narrow track, tend to follow cambers. Grip levels are high and body-roll virtually non-existent as we power through the turns, threading our way up and down the winding roads. Finally we reach an 11-mile stretch of smooth bitumen, almost tailor-made as a sprint course. Comprising modest straights between switchbacks and fast, sweeping 60-70mph bends, here all 211bhp can be fully exploited. Using just second and third gears provides wonderfully punchy acceleration, while the Coupe drifts elegantly through the turns with gently progressive oversteer instantly corrected by the responsive steering.

Indeed, roadholding and handling are as beautifully balanced as the contours of the DB3S’s coachwork, the de Dion rear end being of especial benefit on these Alpine roads with their changing surfaces. Although perfectly effective, the large Alfin ventilated drum brakes (later production DB3S roadsters had discs) are initially lacking a little in feel, needing a hard push on the pedal to pull up quickly when travelling at speed. Once the newish pads are fully bedded-in, however, confidence in them improves and they prove well up to the job – as long as one remembers that ultimately they are drums.

One could happily drive the DB3S Coupe every day and any distance, such is its usability, comfort and strong performance, all allied to complete docility. Unquestionably one of the rarest of all Aston Martins, it is as seductive to drive as it is to gaze upon.