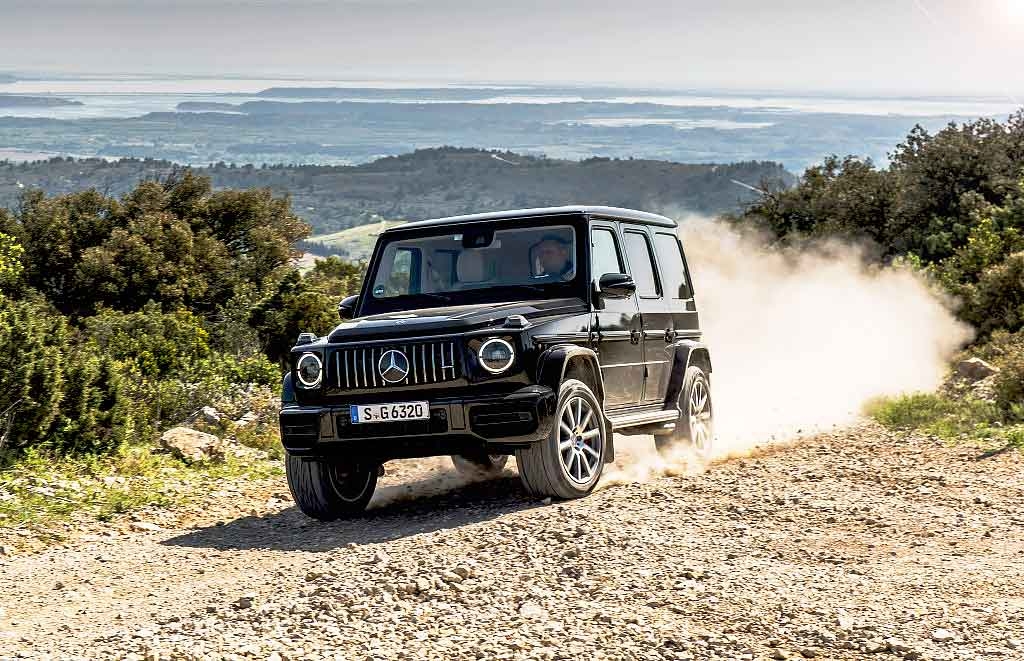 Worth showing off about Forty years into its career, Mercedes launches an all-new G-class. Well, nearly. Words Glen Waddington.

I keep an open mind as I pilot the new G63 AMG W464 along a rutted gravel track with some haste, centre diff locked (you can do the same front and back too) and traction/ throttle mapping in Trail mode. After all, the words ‘Range Rover’ and ‘Sport’ didn’t seem like natural bedfellows, but a supercharged V8 and clever suspension honing proved sceptics wrong, while maintaining the ability to clamber over rocks and drive through rivers kept the faithful exactly that. And at the top of the climb, as the going gets a bit rougher and twistier, my companion – one of Mercedes-AMG’s elite drivers – deactivates the diff lock and drops us into Sport+ mode. ‘Drive faster,’ he says. So I do.

It’s a revelation, frankly. While there had been plenty of time to get used to the new G’s impressive on-road refinement and agility, and ibex-like rock clambering could be taken as read, I hadn’t anticipated WRC-style antics on gravel. Yet they’re there for the taking, whether you need such ability or not.

This impressive handling – on- or off-road – is at the core the new G-class’s appeal. The old car had its origins in a military vehicle, developed by Steyr-Puch and built at the company’s factory in Graz, Austria. The new one is built there too, but it was developed in-house by AMG, not so much as a sporting device but because such a special project – this is not a high-volume production car – was best handled by a small, specialist team. Yet I’ve seen precious few claims that this is ‘all new’. Sure, it looks very familiar, though it’s 121mm wider – to the immediate and noticeable benefit of interior space, the ladder-frame chassis is all-change and way tougher, the interior is befitting of a Merc at last, and there’s independent front suspension and rack-and-pinion steering. Welcome to the modern world.

So there are some carry-over parts, right? Well, yes. Spotters might notice unchanged sun-visors (familiar to 190 saloon drivers, too), the spare wheel cover, headlight washers, and exterior door release buttons – though not the actual handles. And that’s it. Quite a thorough job, then.

And weight has been shed. Despite the stronger chassis – which supports a stressed body but absorbs any axle shock that’s fed directly to it; there are no subframes – multiple grades of steel add strength only where it’s necessary and there are aluminium panels (wings, bonnet, doors, tailgate), which together mean a reduction of 170kg. It still weighs 2.5 tonnes, but feel how rigid it is over rough terrain and that seems acceptable.

Prices start at £143,305 for this 577bhp twin-turbo V8-powered G63 AMG. It snorts its way up the road, accompanied by an exhaust note like an AMG GT’s, steering and changing direction with alacrity, containing its body movements extremely well yet riding without harshness. Nothing like the outgoing G63, it’s massively impressive and enormous fun, though you know it’ll still be bought by show-offs.

The alternative for the British market is a more subdued derv-drinking G350D, which follows in a few months for rather less money. Meanwhile there’s a G500 for sale in Europe, which is rather charming, as it goes without the G63’s lairiness yet still has ample rumble from a 416bhp twin-turbo V8. Reminds us of the original Range Rover, and it would be our choice. A dark green one, please.

Left and below Looks familiar yet it’s brand new – and now it handles; interior joins the 21st Century, though the view out is much as before, through a flat, near-vertical screen.