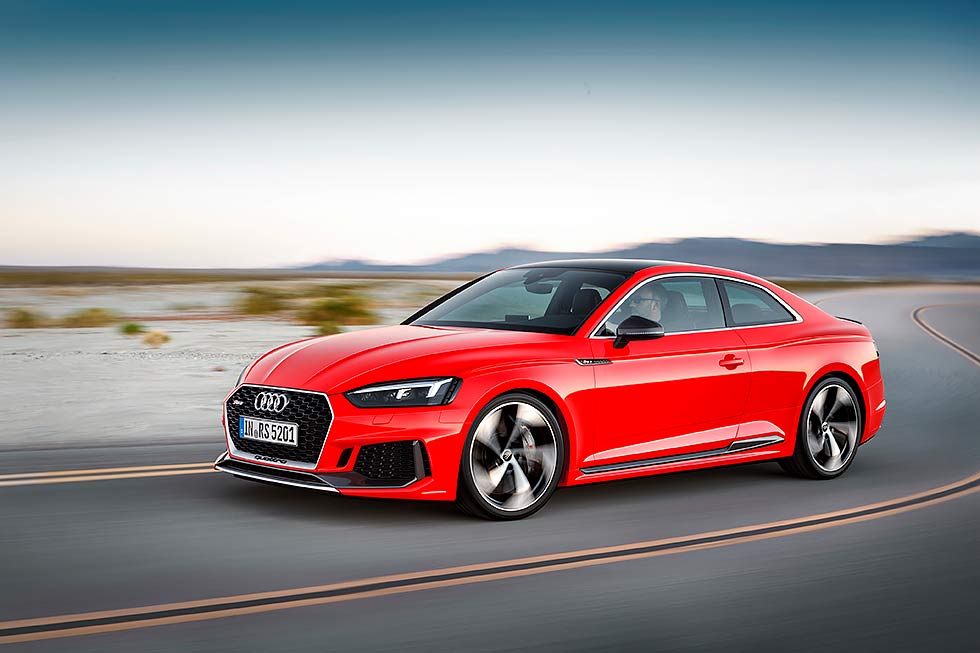 After months of speculation, the production RS5 has been unveiled at the Geneva Motor Show and, on first impressions, it appears that it’s going to be another big hit for Audi.

As we predicted, the super-coupe is powered by an all-new 2.9 twin-turbo V6, which makes a healthy 450hp and 600Nm. The engine, which was jointly developed with Porsche is a ‘hot-V’ configuration with the turbos at the top. Audi claims a 0-62mph time of just 3.9secs, and a top speed (with dynamic pack) of 174mph. With an eight-speed tiptronic gearbox taking care of shifting duties and max toque available from just 1,900rpm to 5,000rpm, this is sure to be a very rapid machine. It’s also 60kg lighter than the previous model.

Fans of the previous generation’s burbling V8, may bemoan the loss of two-cylinders, but the increased performance offered by the twin-turbo V6 more than makes up for it in our eyes.

When it came to the styling, Audi has gone all out to make a statement with the RS5. While some RS models may have played down their potency, there’s no mistaking the RS5’s intentions. The front-end features deeply sculpted intakes, with additional vents, which together with the wider, flatter grille gives the RS5 a very aggressive sneer.

For many, an RS model isn’t complete without wide arches and thankfully Audi has delivered the goods here. The arches are 15mm wider than standard and have a sculpted, quattro-esque design.

They also feature additional air intakes at the front – a neat touch. At the rear a deep diffuser sets the tone and houses the trademark twin-oval tailpipes, while a very subtle lip spoiler finishes off the boot lid. This car oozes latent aggression.

The RS5 is the only car in this segment to feature permanent four-wheel drive, although this setup, like the TT RS features a 40:60 rear-wheel bias. A sports differential will be available as an option, along with Audi’s dynamic ride control.

Talking of options, the RS5 has perhaps the coolest box you can tick – a full carbon fibre roof. It’s designed to reduce weight of course, but also looks fantastic, in bare carbon. Carbon junkies can continue to get their fix of the black weave with a rear lip spoiler, mirrors and of course carbon ceramic brakes.

Having seen the impeccable interior of the Audi S5 F5, I did wonder if it was possible to better this class cabin, but, as ever, Audi has managed to do it – and then some. The sports seats feature the now trademark honeycomb stitching and there’s a chunky flatbottom steering wheel. Add to this, lashings of carbon fibre, Alcantara, Audi’s virtual cockpit and a multitude of driver assist and connectivity options, and you have something very special.

Prices are yet to be announced for the RS5, but we’d estimate prices to start at just under £70,000 when it is ready to order, with first deliveries expected in June.

Aggressive styling sets the tone for this all new RS model. Above: 2.9 twin-turbo V6 looks impressive. Interior finish is impeccable. Seats have honeycomb stitching. Below: Under the skin of the new RS5 – note the carbon fibre roof.

“This is sure to be a very rapid Audi”