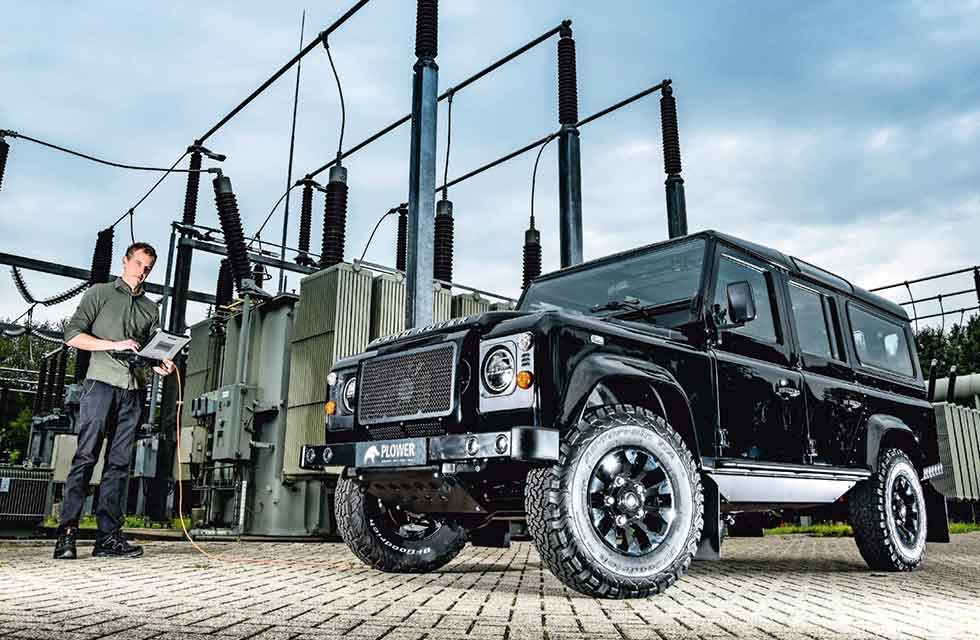 Occasionally, I visit some weird places to see all sorts of Land Rovers, but this is the first time I’ve stood this close to a transformer packing 150,000 volts.

I’ve come to see a freshly converted, all-electric Defender, which explains the ‘interesting’ surroundings – and I’m in the Netherlands, which perhaps explains why I’ve been given permission to be here at all. The 2008 110 station wagon looks standard apart from a sprinkling of subtle modifications – bespoke steering guard, bumper-mounted Nolden fog lights and daytime running lights, Truck-lite headlights, sturdy stainless steel rock sliders and Zunsport grille.

Underneath its skin, though, this very special Defender is anything but ‘standard’.

Brothers Philip (31) and Wessel (30) Ploegmakers created the company, Plower BV, last year with the sole purpose of making an all-electric Defender; this is the first of what they hope will be many. With a surname that translates as ‘plough makers’, it’s unsurprising to learn that the brothers grew up on a farm and that Land Rovers proved to be an intrinsic part of their DNA. ‘Land Rovers have always been there; they were the only cars we drove,’ confirms Philip.

Once they were old enough to buy and drive their own Land Rovers, their involvement with them really took off; modifying, repairing, restoring. Even now, Wessel’s ex-MoD 110 is outside the workshop; and in addition to the company-branded 110 that Philip drives every day, he has a 110 pick-up that he’s restoring.

‘I owned several Land Rovers before the silver 110 – which I rebuilt and put on a new chassis.’ After Philip’s career as a professional photographer he trained as a helicopter pilot – then the brothers’ Land Rover hobby really took off.

‘I hadn’t seen any other company doing electric Defender conversions, and we were really into it and had been working on the ideas, so we founded the company,’ says Philip.

In the early days, while they developed their design in fine detail, they did some conventional rebuilds and engine upgrades, but the main function of the company is to convert Defenders to electric.

First of a kind

The choice of vehicle for their first all-electric conversion was critical; it had to have market appeal even before the conversion. Philip and Wessel chose a 2008 2.4 TDCi Defender 110 station wagon with just 60,000 miles on the clock. Once stripped, the bulkhead and chassis went off for sand blasting and hot zinc dipping; the whole vehicle was then resprayed.

‘We started with a wish list of components and features, and it got smaller and smaller – some companies didn’t want to work with us because we’re very small and only a start-up,’ says Philip. The electric motor is at the heart of the conversion and was the most significant component, affecting the performance and the vehicle’s character.

‘We started with the motor and soon decided we needed fixed-speed reduction gearing on it. We need it because we wanted to keep the original vehicle’s performance and it needed to tow like a standard Defender, so needs quite a lot of torque at low speeds,’ says Philip. The standard gearbox has been removed and the reduction gearbox mounted directly on to the transfer case, reducing the motor’s revolutions before going into the standard TDCi transfer box. ‘Like the motor, it can run in either direction.’

This Defender literally has electric-everything: electrically driven vacuum pump feeding the brake servo; and an electric hydraulic pump supplying the standard power steering box, which runs from the moment the vehicle is activated. All the power the vehicle needs is stored in the 85kWh battery array, split into four waterproof housings (see photo).

As a precaution during deep wading, the battery housings can be pressurised with a simple press of the wave symbol on the dash-mounted touchscreen. ‘The wading depth is 800mm, better than the standard Defender, but we designed it so the battery packs can be fully submersible. Safety is the biggest concern; you can’t take risks with the voltages we use (400v) and Dutch law is very strict, so we need quite a lot of safety devices.’

Keeping an eye on all the systems is vital – and the added dash-top monitor does just that. Among many details, it shows the batteries’ performance and range, which you can adjust. There are three different charge levels to select when recharging: 60, 80 or 100 per cent. ‘This is because it’s not good for the vehicle or batteries to always charge them to 100 per cent; it will shorten their life,’ explains Philip.

Most Dutch charging points are the quick charger type (32-amp) that can recharge the batteries from 10 to 80 per cent in under three hours – but the brothers are working on a fast-charge system for the batteries (which Philip believes should last for up to 125,000 miles if looked after).

One of the features designed to help preserve the batteries and get the best from them in all driving situations is Plower’s sophisticated battery management system. It doesn’t just tell you the state of charge but monitors every battery cell, each one’s voltage, its state of charge and decides if any need cooling. The battery packs are liquid-cooled and, when needed, heated. Like the vehicle’s other two cooling/heating circuits, it’s automated to ensure the batteries’ optimum performance. A second cooling system looks after the oil-cooled electric motor via a dry-sump arrangement with a feed to a small radiator, occupying the space formerly taken by the intercooler. Then there’s an additional circuit to cool the auxiliary high-voltage components such as the inverter, the 22kW on-board charger and the DC/DC converter, which supplies all the standard 12-volt systems. The on-board charger communicates between the external 32-amp/22kW charger and turns domestic AC into DC – very sophisticated.

To get the vehicle to drive forward, the HV (high-voltage) system has to be activated; this takes a few seconds as specific HV relays (contactors) are closed in a particular sequence. This sequence starts with a key fob press to unlock the vehicle or when the driver’s door is opened. Driving an electrically powered Defender is always special.

For decades, we’ve all been conditioned to expect industrial-levels of noise and vibration, setting off myriad squeaks, rattles, bumps and bangs as we lumber slowly down the road.

With the equivalent of 214bhp and up to 280lb ft of torque, this silent Defender is a revelation, even though there isn’t any sound-deadening insulation fitted yet. ‘We needed to know what sound it makes before choosing the amount of sound-deadening,’ reveals Philip. And it’s incredibly quiet. Even the transmission is relatively silent; just the faint hum of an efficient electric motor.

When stationary in on-road mode, it will creep forward without throttle – like an automatic. In off-road mode, the transmission will hold the vehicle stationary regardless of angle/ slope; it won’t creep. There’s regenerative braking too – take your foot off the accelerator and you get engine braking. This can be deselected if desired.

The sky is overcast, threatening rain, the wind blustery – not ideal conditions to demonstrate the performance of this gleaming black 110. Even so, I’m hugely impressed by it and the detailed work that’s gone into creating it. There’s no doubt in my mind that electrically powered vehicles are the way forward. The only question remaining is: will they be plug-in battery-powered or the hydrogen fuel cell battery-powered variety?

The 85kWh battery array is spilt into four packs: one in the engine bay, one instead of a fuel tank and two beneath each side of the cab floor. The waterproof packs can be pressurised during deep wading too.

Although it weighs 300kg more than standard, it’s brisk! Its maximum 214bhp/280lb ft is only available for 30 seconds. Then the system drops to 160bhp and 220lb ft for continuous use.

Unlike many electric-converted vehicles, the Defender’s luggage bay has been left completely intact – so the 110’s famous versatility is still there for the taking.

Safety features include the need to switch the ignition key forward, as though starting an engine (ignition has three positions), before you can drive. If the charge plug is in or the driver’s door is open, it won’t drive.

Ringing in the changes

A simple forward-back gearlever selects drive, reverse or neutral. On top is a rotating ring that selects driving modes: off-road, sport (on-road), towing and eco. Each has a different throttle response and torque setting.

OWNER: Philip Ploegmakers For Philip (pictured) and Wessel Ploegmakers, Land Rovers have always featured large in their lives. A childhood spent on a farm meant they were driving Land Rovers around the fields as soon as they could see out of the screen. The brothers’ company, Plower, was founded at the beginning of 2018 to carry out electric conversions of Defenders.