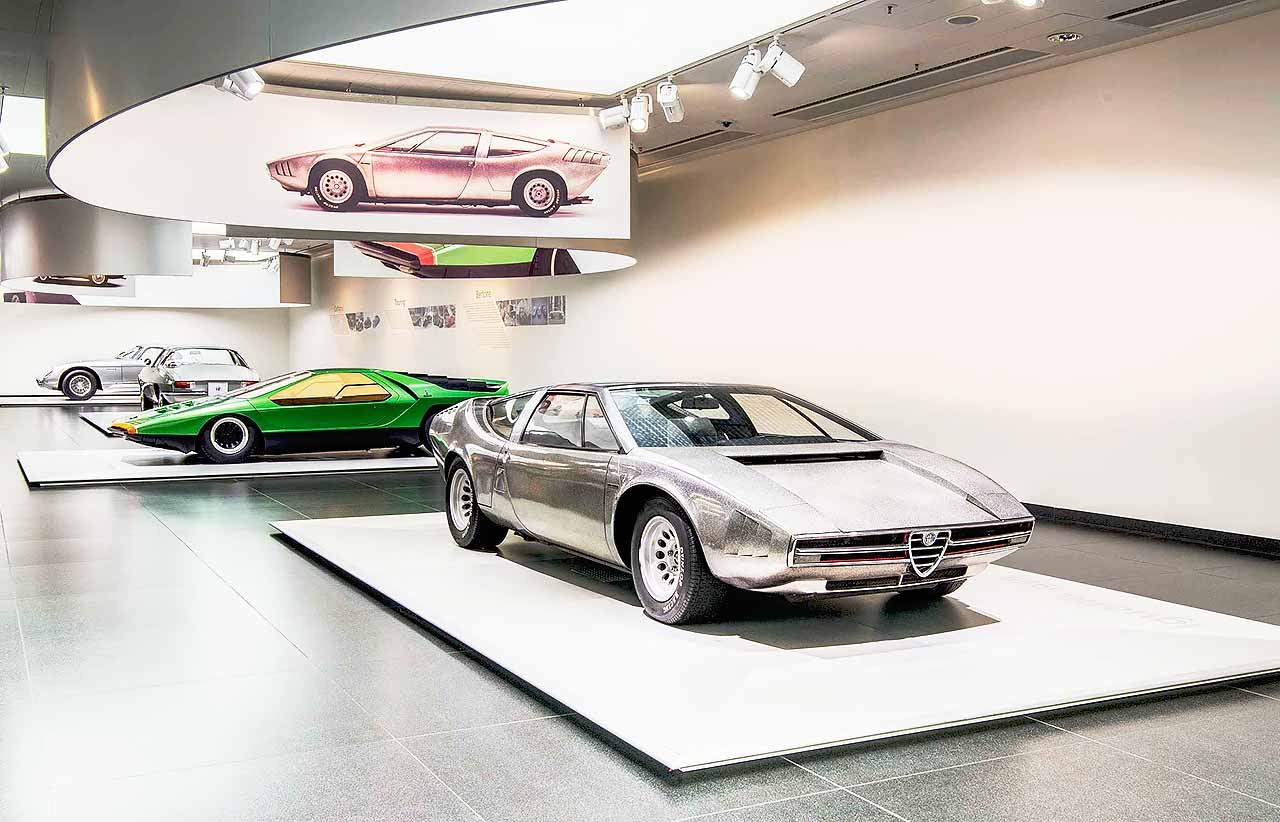 Delights at the museum. Alfa Romeo’s museum not only charts the company’s long and sometimes glorious history, it also makes you aware of the passion that has kept the company going through its rockier periods. Words by Antony Ingram. Photography by Aston Parrott.

ALFA ROMEO MUSEUM Alfa Romeo’s history is as rich in heritage and extraordinary machines as it is mired in turmoil and duffers we wish we could forget. Thankfully the company’s excellent, recently refurbished museum near Milan focuses on the magnificent rather than the mediocre. And it’s more than worth the entry fee.

You do not think wedges. Certainly not wedges of dazzling, glimmering, disco-era emerald, brought to an abrupt halt by bands of traffic-cone orange, with cavernous vents and a profile low enough to trim the lawn on Centre Court. Yet the Carabo show car from 1968 (see opening image) is a vibrant insight into an Alfa Romeo that might have been.

Instead, Alfa has carefully cultivated the crimson curves image, somehow infusing even its most derided products with the kind of cultural heritage and a loyal, impassioned following that most car makers would kill for. So as a journalist you must fight to remain resolutely objective, enduring the disappointment when a Fiat-based front-drive hatchback with a 1.3 diesel isn’t some kind of 1965 GTA incarnate, hoping that the next car might turn things around.

Perhaps deliberately there are no Mitos, diesel or otherwise, visible within the recently refreshed environs of the Alfa Romeo Museo Storico in Arese, near Milan. It’s the first time Drive-My has visited the museum since its refit between 2011 and 2015, and from the humble saloons to the eye-popping concepts and cigar-shaped racers, it’s a perfect opportunity to relearn why Alfa Romeo still matters.

I’ll get right to it and say the collection is absolutely worth the 12-euro entry fee. Don’t try to go on a Tuesday as that’s the day it’s closed, and definitely bring a camera – you’ll be using it a lot. One more piece of advice: give the slightly odd virtual reality ride a miss, particularly if you’re wearing a skirt (I wasn’t but Alfa’s PR was), since the jets of air that are inexplicably fired at your legs in an attempt at immersion could be cause for discomfort and embarrassment.

The only other embarrassment you might face is realising just how many of Alfa’s cars you were unaware of before visiting, like the 33 Spider ‘Cuneo’ that sits immediately opposite the turnstiles as you enter – a Pininfarina-bodied one-off created in 1971, based on the chassis and 2-litre V8 running gear of the Tipo 33. A Montreal prototype sits adjacent, as does a Disco Volante, and across from those is another 1971 wedge, the Alfasud-based Caimano.

An architectural red band winds its way around the collection above your head, feeding you past the brand’s aero-engined history and up an escalator to the museum proper. It’s presumably meant to represent an artery, but it feels, equally appropriately, much like you’re making your way through the intake or exhaust port of an engine.

The artery feeds you into the first hall and exhibit number one, a 1910 ALFA 24 HP. It was the company’s first car, and a vehicle built when the name Alfa was still an acronym for Anonima Lombarda Fabbrica Automobili, or ‘Anonymous Lombard Automobile Factory’. The name Alfa Romeo came ten years later, under the stewardship of entrepreneur Nicola Romeo, and it’s in the 1920s and particularly 1930s that the foundations for Alfa’s current reputation were built, both on the road and track.

At first, this division is difficult to see – the pair of beautiful 1930s 8C roadsters look much like their racing counterparts a few storeys below, but Alfa’s road car progression is wonderfully illustrated through the 6Cs aimed at wealthy owners, to the 1900s, Giuliettas and Giulias that gave the brand a more mass-market appeal. All were hugely influential and innovative in their day, from their use of independent suspension and streamlined bodywork, to the Giulietta and Giulia’s twin overhead-cam engines at a time when most rivals were still using pushrods.

Alfa continued to innovate, although – as is evident from the museum’s chronological layout – the cars began to change in less positive ways, too. For most observers, the 1970s are when the rot set in, metaphorically and literally. Struggling for money, owner Fiat bounced between cost-cutting and joint ventures, and despite turning out everyman drivers’ cars such as the transaxle Alfetta and front-drive Alfasud, quality began to slip.

It’s a real shame, as the pristine examples of Alfa’s ’70s, ’80s and ’90s output on show at Arese are all deeply appealing in their own way. Alfa’s current range cries out for a small car as uncomplicated and nimble as the ’Sud, while resplendent in a coat of unblemished silver paintwork, the 75 looks far more handsome today than it did in 1985. Nearby, an early 156 in Nuvola Blue serves to illustrate how large and needlessly aggressive the latest Giulia appears in comparison. It also reminds you how much the current saloon, Quadrifoglio aside, is crying out for an engine with the character of Alfa’s Twin Spark and Giuseppe Busso-designed V6s.

If you absolutely must have aggression, the wedge-shaped designs of the 1960s and 1970s in the concept hall remain an object lesson in how to package it. The metallic green Carabo absolutely steals the show, but 1969’s Italdesign Iguana – painted in a metalflake finish that hot-rodders can only dream of – and the bright yellow 33/2 Speciale from the same year look nearly as stunning with their glassy cabins and balloon-like tyres. The Nuvola concept from 1996 (from which the aforementioned 156 got its colour) hasn’t come of age just yet, but it proved a valuable visual inspiration for Alfa’s pretty 1990s output.

In modern times much of Alfa’s past reputation has been forged by a resurgence in its 1960s and early 1970s fare. Giuliettas and Giulias have risen rapidly in value on the back of a wave of interest in historic racing and the restorative and tuning efforts of companies such as Alfaholics. The opportunity to see a genuine Giulietta Sprint Zagato or Sprint Speciale should certainly never be missed. The lightweight, aluminium-bodied Zagatos proved much more successful racers in period, so the latter has adopted more of a grand touring reputation. Both were produced between 1957 and 1962 and both use the same 1290cc variant of Alfa’s classic twin-cam, inhaling through a pair of twin-choke sidedraft carbs and producing a healthy 99bhp.

Zagato’s next compact coupe has long been one of my favourites. The Junior Zagato was by now based on the 105-series platform (the Spider), though like those earlier Zagatos, the Spada-penned Junior Z featured aluminium panels to keep the weight down. Alfa’s 1972 example, aside from being a spectacular shade not dissimilar to Porsche’s Viper Green, is a later 108bhp 1.6-litre car.

Alfa’s road cars might have changed the motoring landscape but its racers virtually defined the early years of motorsport: if you visit Arese for only one reason, the astonishing collection of Grand Prix and Le Mans machines should be it. The thought of starting up the Scuderia Ferraribadged Bimotore – which used a pair of 3165cc, 270bhp straight-eight engines and could reach 202mph in 1934 – sends shivers down my spine.

Incredibly, even the Bimotore fails to upstage the other cars in Alfa’s racing room. The twin-supercharged straighteight 8C 2900 B Speciale was leading 1938’s 24 Heures du Mans by a hundred miles when it retired with tyre trouble, while the Tipo 158 and 159 ‘Alfetta’ proved to be one of Grand Prix racing’s most successful cars ever, taking 47 wins from 54 Grands Prix between 1938 and 1953.

A lone Tipo 33 Stradale sits across from these Grand Prix monsters, punctuating a space otherwise full of racing cars with one of the most beautiful road-going shapes ever devised. Its specification is almost as perfect as the provocative, Franco Scaglione-penned shape: a tiny 2-litre, 90-degree V8 with alloy heads and chain-driven camshafts, dry-sumped and fed by Spica fuel injection. It sits on independent wishbones all-round, attached to a tubular chassis clothed in aluminium and weighing in at just 700kg – as slight as an early Elise and, despite the V8, almost as tiny. At 39 inches tall, its roofline seems roughly level with your hips.

‘If you visit for only one reason, the stunning collection of racing machines should be it’

This being a ‘living’ museum, some exhibits are absent during our visit as they wow crowds at events such as the Goodwood Festival of Speed, but you wouldn’t know it – when Alfa can wheel out an ex-Giovanardi, European Touring Car Championship-winning 156 Supertouring and Nannini’s 155 Ti DTM car as mere stand-ins, you wonder what else might be stashed away in the darker recesses of Arese’s storage rooms. Next to the 156 sits a pugnacious GTA 1300 Junior; nearby are two of Alfa’s lesser-known forays into racing – a Lola T91/00 IndyCar and a 1981 F1 car.

But you’ll have to ask nicely for the museum’s most tantalising taste of nostalgia. Positioned down a long sliproad near the main building are a set of wooden doors with frosted glass panes. Inside is Alfa’s workshop; terracotta-tiled and pungent with the aroma of metal and old oil, pipes spanning the ceiling and achingly desirable road cars and racers parked diagonally throughout the room. Whatever you think of when you think Alfa Romeo, places like this make it very difficult to think straight.