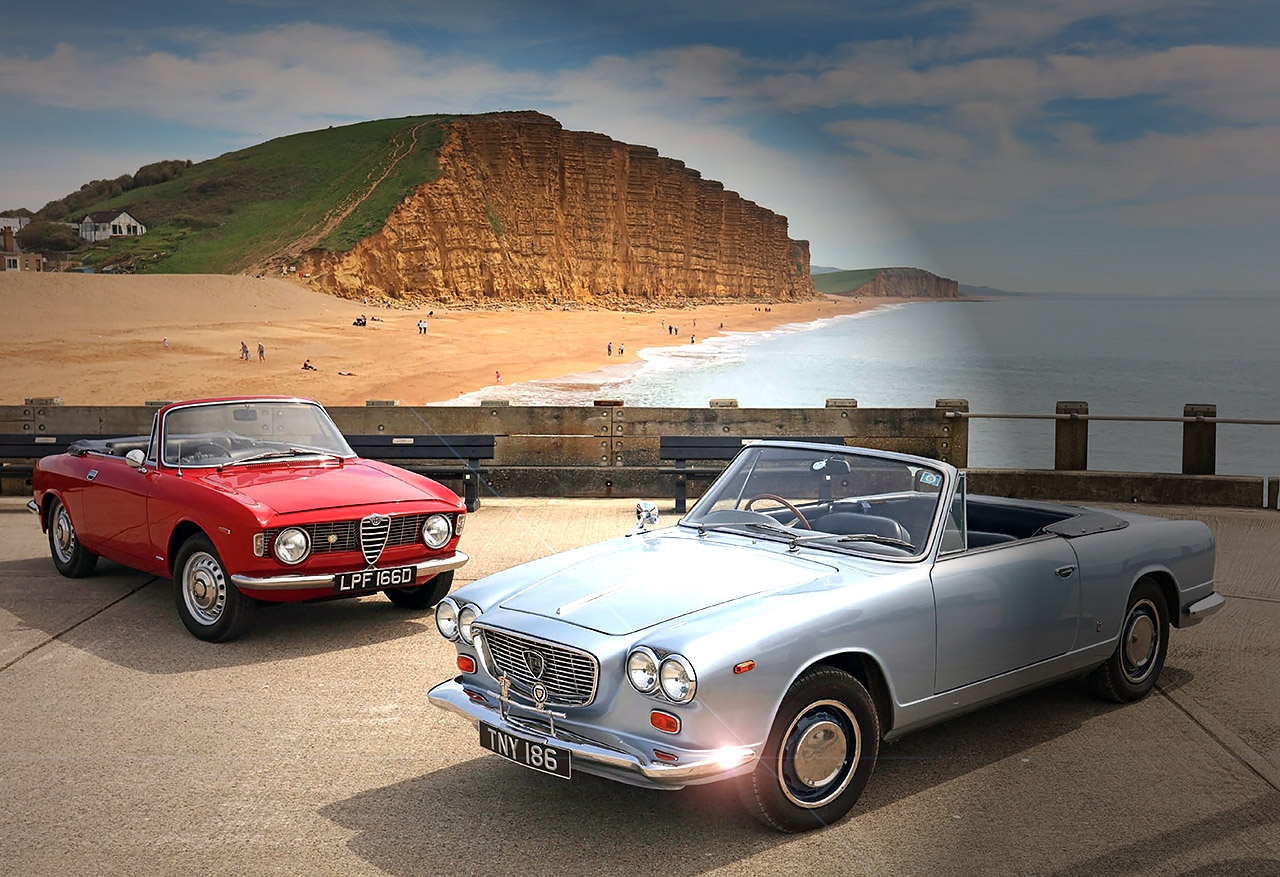 The choice of four-seater opentopped cars was not so abundant 50 years ago as it is today. It was made up of a fractured selection, ranging from the mundane (Hillman Super Minx) to the excessive (anything American), with not a whole lot in between. That probably explains why rare ’60s highlights such as the Citroën DS Décapotable and Mercedes W111 convertible are so valuable and revered today.

Happily, the Latin coachbuilding industry was still agile enough in the early ’60s to be capable of producing short runs of specialist bodywork for mainstream models. It was coupés mostly, but also small batches of soft-tops. Legislators were not yet threatening to ban them, and the Italians had mastered the art of producing monocoques sufficiently stiff that they didn’t bend in the middle when the lid was removed. 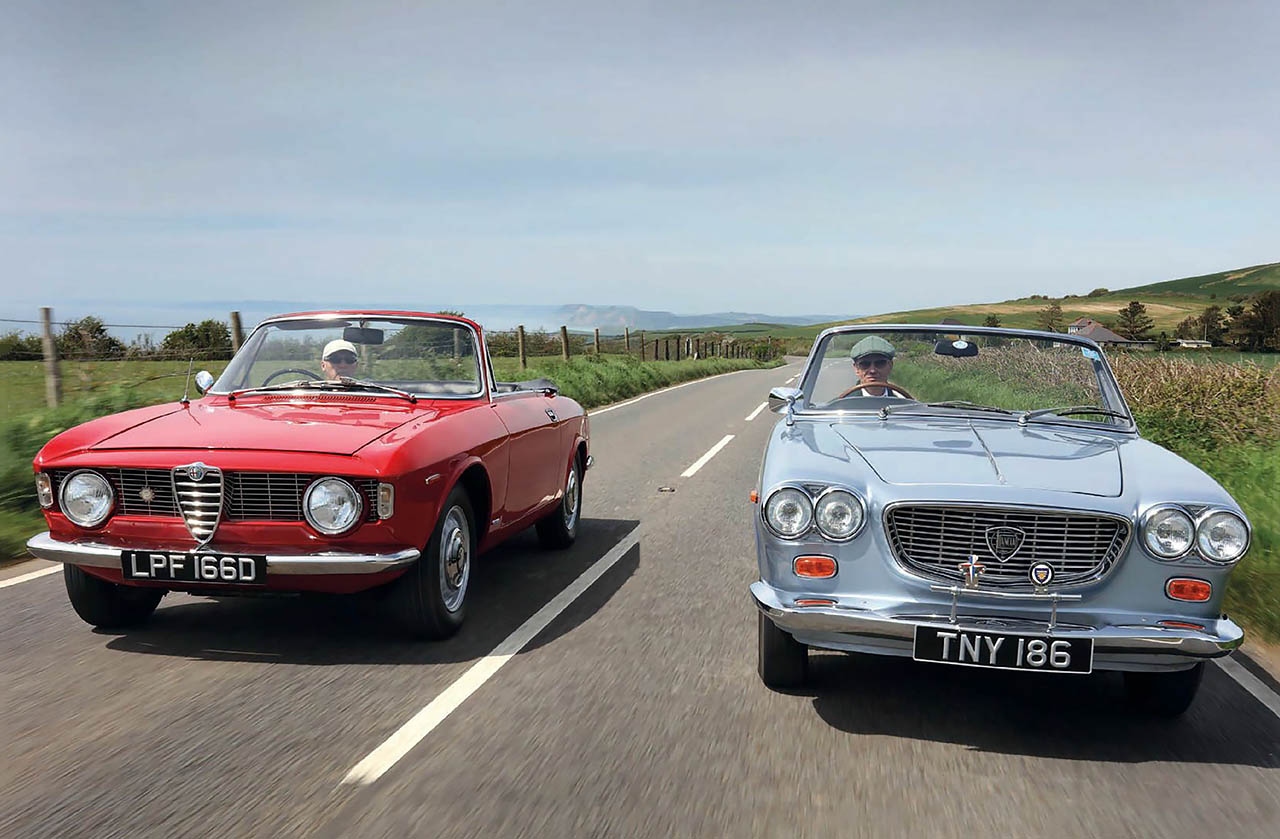 I’m talking here of convertibles (or cabriolets) in the strictest sense rather than two-seater spiders or roadsters. Not straightforward lowslung ‘bird-pullers’ but sensibly sized cars in which respectable people might head for the mountains, enjoy the fresh air and, perhaps, take friends or family with them. Sociable (rather than selfish) open tops, in other words, that offered guilt-free glam for the well-heeled middle classes.

It was a niche market that Lancia and Alfa Romeo were born to, although it should be explained that, in coupé form, the Flavia and Sprint GT were aimed at slightly different buyers. The Lancia was a heavier, pricier, more ‘boutique’ car that was half a class up from the Alfa. It placed the emphasis on refinement rather than outright speed, whereas the Sprint had a younger image and an appeal based almost entirely around performance. The fact that the Alfa happened to be a fairly civilised car was just a bonus. A production run of almost a quarter of a million 105 Series coupés compared to fewer than 17,000 Farina Flavias puts the cars in context.

In open form, however, they seem much more closely matched in image, performance and sheer rarity: 1000 examples of the Alfa and 1600 of the Lancia over similarly brief production periods. Both also offer an excellent illustration of the incestuous nature of the Italian coachbuilding industry at the time. The Lancia, launched at Geneva in 1962 (and built through to May 1964) was a Giovanni Michelotti design constructed on a Pininfarina coupé platform by Vignale at its new factory in Grugliasco on the outskirts of Turin. The Alfa 1600 Sprint GTC, announced in 1965, started life as a Bertone coupé, was plucked from the Arese production line and sent to Touring at Nova Milanese to have its roof chopped and its floorpan strengthened.

By then, Touring of Milan (which also built Alfa’s 2600 Spider) was already in receivership. When the GTC’s brief career ended in 1966, Alfa’s soft-top ambitions had in any case refocused on the Pininfarina-bodied Duetto.

At £2000 and £2600 respectively, the GTC and Flavia had a limited UK market, although their manufacturers were sufficiently optimistic to think that right-hookers were worth building. Martin Thompson’s GTC is from a batch of 99 with right-hand drive, while Tony Stokoe’s Flavia Vignale is one of about 40 thought to have been sold here new. It was registered in 1968, but presumably its first owner didn’t realise that it was already four years old!

While the Alfa GTC came with just one 106bhp, 1570cc specification, the Flavia started out in ’62 with exactly 1.5 litres, boosted to 90bhp by twin Solex carburettors but mainly remembered for its poor low-down torque. Then, in 1963 (after 724 had been built), it was uprated to a 1.8-litre version of the all-alloy ‘boxer’. It gained only 2bhp but, more importantly, had a much flatter torque curve thanks to the ram effect of the long induction manifolding from its single carburettor. Perhaps the nicest of all was the Flavia Iniezione – the Kugelfischer mechanical- injection system boosting power to 102bhp; only 42 such Flavia convertibles were built.

Both of these cars have excellent and easily retractable hoods (the Alfa has particularly neat wind-up quarterlights) that sit flush behind the rear seats. Each could be optionally supplied with a metal hardtop and it seems that most Flavias had one, but few of the GTCs.

You sit up well in the Lancia, which has marginally more leg and shoulder room, plus a long flat-floored boot that is possibly twice the size of that of the Alfa. The GTC’s grey mouldedplastic dash, with quad instruments mounted in a concave panel, is like the one found in the early ‘step front’ coupé. It is arguably a little uninspired compared to later styles but has a more complete layout that’s easier to understand than the Lancia’s (of which the heater controls, in particular, are a complete mystery). The Flavia has an austere instrument display with the ribbon speedo/rev counter pack of the Farina Coupé and Sedan, as well as those unusual ‘piano key’ switches for the lights, heater blower and wipers.

In other cabin details, the Lancia looks more luxuriously hand-finished than the Alfa – which is what you would expect – with a glovebox that slides out like a desk drawer, and a neat ashtray with a hidden lighter that forms part of the catch. It has fairly substantial seats and more room in the back than the GTC, but carrying anyone in the rear of either car would involve a lot of negotiation for legroom with those in the front, so the ‘four-seater’ tag is nonsense really.

With its twin alloy cam boxes and dual Webers, the Alfa’s engine bay has a classic visual appeal that the Flavia lacks; the Lancia’s flat-four is hung well forward in the heavily rubber insulated subframe and slung low under the big tubeshaped airbox. Fired up, it is an exceptionally smooth and quiet engine compared to the slightly frantic Alfa, ticking over with a gentle tremor and just the occasional click from a tappet. On the road the Flavia runs very cool at all times and has the sort of even, sustained acceleration that is deceptively undramatic. True, it gives away 16bhp and 400lb to the Alfa, but there doesn’t seem to be that much in it on the road. You do miss the versatility of the GTC’s five-speed ’box, though; just occasionally you find yourself in a situation where second feels too low yet there isn’t enough urge to keep the performance flowing in third when boosting the Lancia up a hill.

Changing gear is no chore in the Flavia. The massive gearlever could have come straight out of an Aprilia and has long, smooth movements with good, but not unbeatable, synchromesh. Top is a restful overdrive in which the Lancia will cruise serenely all day at 90mph or more. Frontwheel drive means that it is very stable in a straight line, yet it understeers only enough to sustain confidence – and with very little roll or drama. Only the strong castor return through the handsome wood-rim wheel and the foursquare neatness to the way the car pulls itself through corners (something that a Fulvia coupé owner would recognise) hint at the chassis layout.

There is undeniably a more fluid and natural feel to the rear-drive Alfa and its controls. Because you sit low in it, the GTC has a more seat-of-thepants feel. It has more of a ‘sports car’ engine, too: the throttle response is sharper, the sounds from under the bonnet lustier. The gearchange is also handier, with a shorter, smoother action than the Flavia’s long chromed wand. If anything, the Alfa leans more than the Lancia but its steering is lighter and higher geared (by a full turn, lock-to-lock) so the GTC feels wonderfully agile on a twisty road. You can instinctively set it up for a series of curves without feeling that you’re working too hard. Driven aggressively, the Alfa flatters your style more readily than the Lancia, which scuttles around efficiently whatever the curves it is presented with, but it doesn’t encourage outright flamboyance.

Where the Flavia does score decisively over the firmly sprung Alfa is in its quiet, calm salooncar ride and its impressive lack of scuttle shake. This is perhaps because the Vignale body, which has notably deep sills, was designed as convertible from the beginning rather than being a cut-open coupé. Not so the Alfa: whatever Touring did to brace the shell, it evidently couldn’t prevent the dashboard and steering column from wobbling noticeably on bumpy roads.

Neither is the Alfa a match for the Lancia in stopping power, its Dunlop discs feeling soft and hesitant compared to the Flavia’s powerful (if complex) Girling Superduplex system, which has a firm pedal and instant response.

Either car would be a pleasure to own, which is probably why they come on the market so infrequently. Lifelong Alfa enthusiast Martin Thompson has owned his GTC since finding it as a rusty (but at least complete) heap in the early ’80s. He has in effect restored it twice, latterly in 2010, but is keen to maintain as many original features as possible rather than go down the route of fitting a bigger engine and later brakes that seems to tempt so many 105 Series owners. Lancia owner Tony Stokoe is really a Citroën man – he owns a Traction, SM and DS Safari – but has not regretted selling his alarmingly valuable DS Décapotable and replacing it with the Flavia.

Neither of them has any plans to sell but, if they did, any buyer’s decision would probably be based around the intense tribalism that each marque inspires (people tend to be Lancia or Alfa followers, but not both) or just by the cars’ visual appeal. There is an undeniable svelteness about the Alfa Romeo that the initially rather boxy-looking Lancia, with its sharply chopped-off tail, lacks.

Considering that it was never intended as a convertible, the GTC makes an incredibly elegant little car, hood up or down.

It is only after you have gazed at it for a while that you notice the subtle curves in the Flavia’s large, smoothly flowing panels. Or its pouting grille and quad headlamps (the chrome jewellery was borrowed from the Maserati Mistral, which was also the work of Michelotti and Vignale). And then there’s the long, clean rear deck that gives such a severe but handsome profile.

It’s not quite an Aurelia Spider, or even a Flaminia convertible, but the Flavia tangibly captures something of the appeal of those cars. That uniquely Lancia combination of Swiss watch internals and couture bodywork that, to some of us, makes them so irresistible.

‘THE FLAVIA SCORES DECISIVELY OVER THE FIRMLY SPRUNG ALFA IN ITS QUIET, CALM RIDE’

Clockwise: the Flavia has a sophisticated subtlety to its lines, especially from the rear three-quarter; flat-four lacks the visual appeal of the Alfa unit but is beautifully refined in its power delivery; lovely detailing abounds.