A tale of two pedals – what goes on inside self-shifting gearboxes? 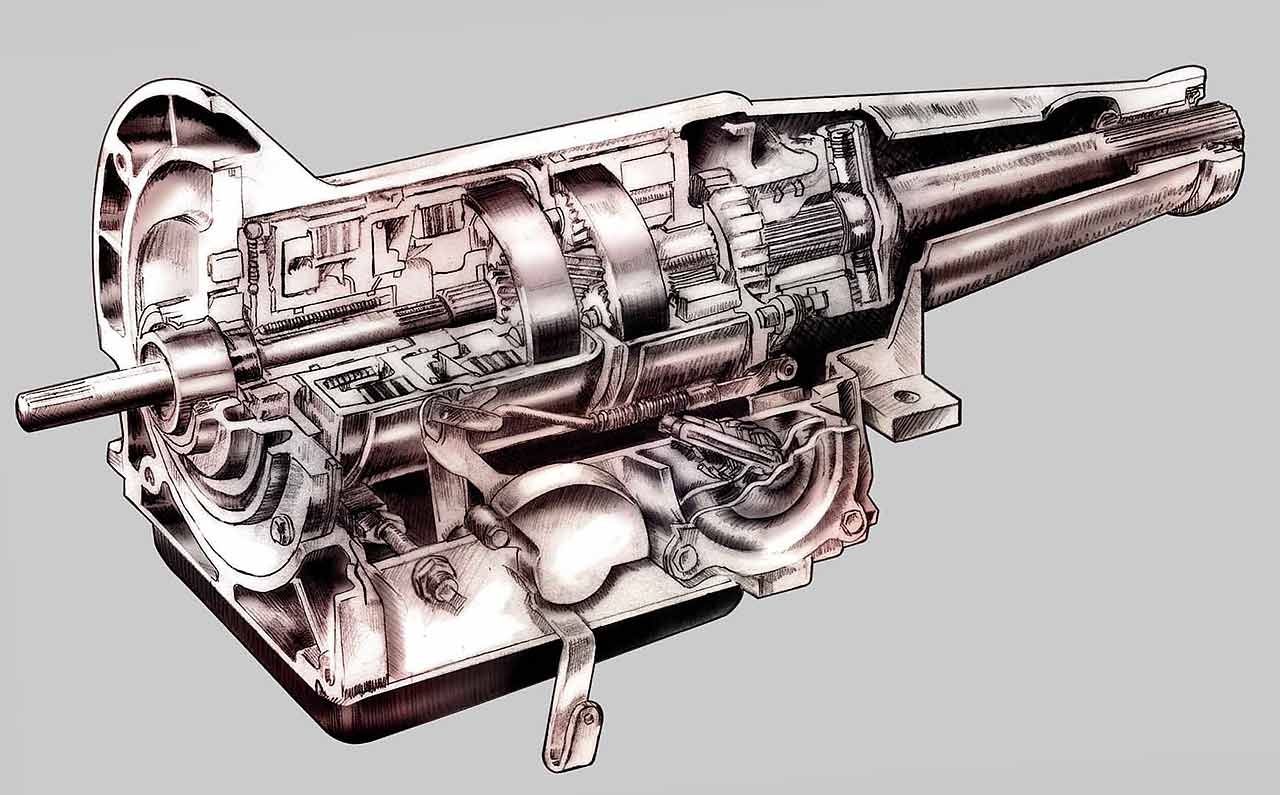 Transmission secrets. A tale of two pedals. In the second instalment of our two-part guide to transmissions, here beginneth the lesson on automatics. Words John Simister. Illustration Robert Hefferon.

‘Some of the finest car s – GTs, luxury saloons and modern sports cars and super cars – have a gear box that does the work for you’

If you read Drive-My last month you’ll already have an insight into the workings of manual transmission and why we Octane types have such a love affair with it. But some of the world’s finest cars – GTs, luxury saloons and, increasingly, modern sports cars and supercars – have a gearbox that does the work for you. Time for a lesson here, then, too.

Epicyclics lent themselves to automation, growing from pre-selector transmissions in which an electric switch selects ratios by locking parts of the gear train with brake bands. You select the next ratio and press a foot pedal to engage it. A fluid flywheel – really a centrifugal clutch in which oil flowing through internal turbine blades gradually locks the two halves as speed rises – transmits drive and enables the car to move away from rest.

From here it was a short step to automatic control of ratio changes, with an extra turbine within the fluid flywheel to multiply torque and extend the downward reach of each ratio: a torque converter. Instead of being manually controlled, the actuators that select the ratios are triggered according to the car’s needs.

These actuators are hydraulic, and which ratio is used, when, is dictated by road speed and engine load. Speed is typically measured by a governor on the output shaft, acting as a pressure regulator for the gearbox’s pumped hydraulic circuit, allowing system pressure to rise with speed. Engine load is determined by throttle position or inlet manifold vacuum. Changes in these parameters are communicated to a bank of spring-loaded hydraulic valves.

The movements of these valves against their spring pressure cover, or uncover, ports that allow the hydraulic actuation of whichever brake bands or clutches are required. A high engine load will trigger a lower ratio, provided the car isn’t going too quickly as sensed by the governor. Further valves are actuated by the selector lever (now via electrical switches) for park, reverse, neutral and manual control. Such automatics have had as few as two gears (the GM Powerglide) or as many as eight.

Current torque-converter autos use internal clutches instead of brake bands, and can lock the torque converter once the car is moving to stop wasteful slippage and give a more positive feel. This can also make shifting via a manual override feel more satisfying, and so compete better in sporting cars with the two more recent trends in two-pedal transmissions.

The first of these is the robotised manual, which uses automated control of a conventional clutch and gearbox. It developed from past automatic-clutch systems that required you to move a normal gearlever, such as the Porsche Sportomatic, Citroën C-Matic and Saab Sensonic, all of which sensed lever movement to control the clutch.

The first commercially available system was Ferrari’s F1-Shift, fitted to the 355, which added paddleshifters on the steering column for fingertip control. Alfa Romeo’s Selespeed came next, but all such systems have been plagued by snatches and surges that require a sensitive driver to overcome, despite automatic throttle blipping to smooth downshifts, and stories abound of savage clutch wear.

Robotised manuals, although cheap to make, have largely been ousted by the latest generation of torque-converter automatics or, more often, by double-clutch transmissions (DCT) whose speed and precision these new autos try to emulate. Here, the gearbox has two concentric input shafts, each with its own clutch, one inside the other, and (in six-speed form) each is linked to its own set of three gears, one even-numbered, the other odd. The transmission can shift from ratio to ratio with no break in power, because one clutch engages exactly as the other lets go. Sensors measure acceleration, revs, speed and more to predict which gear will be needed next, be it higher or lower, so it’s pre-selected and ready to transmit power as its clutch bites. It’s more compact and efficient than a torque-converter auto, and isn’t constrained in its exact choice of gear ratios as an epicyclic transmission, for mathematical reasons, is. And its shifts can be near-instant and perfectly smooth.

The DCT – described also as DSG, PDK, TCT and other tags, first seen on the road in the Audi TT V6 but pioneered by Porsche in the racing 956 three decades ago as the Porsche Doppelkupplungsgetriebe (PDK) – is seen by carmakers as the future. Instant F1-style switch-like manual control if you want it, or restful automation. You can maybe set a faster lap time on a track. Fuel economy and CO2 are often more tax-favourable, partly because the system might be better than the driver at choosing the optimum gear ratio, mainly because Europe’s official economy tests favour self-shifters. That’s because they can do their own thing rather than having to change gear at officially mandated, and sometimes unsuitable, speeds in the tests (one of the scandals of our age). So what’s not to like?

Almost nothing, logically. And a DCT is great if you like your car to feel like a computer game. Many people do, which is why sales of manual-transmission versions of sporting cars are falling. So if, like many of us in the Octanosphere, you’d rather do it yourself, feel what’s happening in the driveline and relish the skill of perfecting the gearshifting progress with co-ordination of clutch, gearlever and accelerator, just enjoy it while you can. Before long it will be another good reason to buy a classic car, because there might no longer be any suitable new ones.

We’ve covered the story of the main transmission types, but there have been others – the sidings on the gear train’s tracks, if you like. Take the Frazer Nash chain drive, with its variously sized sprockets on a solid rear axle.

Or the ingenious but doomed use of magnetisable powder as a progressive coupling in a clutchless or automatic gearbox (Smiths Manumatic and Easidrive; the French Ferlec). But the biggest cul-de-sac, except for its use in some hybrid cars, has been the continuously variable transmission, or CVT. This was pioneered by DAF, which used a pair of drive belts linking pulleys able to alter their width as required and thus position the belt further into or out of the pulleys’ vee channel. So the effective circumference could alter, changing one pulley’s rotational speed relative to its partner’s. A centrifugal clutch got the little DAFs moving from rest.

In the 1980s, both Ford and Fiat revisited the idea but used a wide drive chain within the gearbox instead of belts. Audi adopted the CVT more recently and called it Multitronic, incorporating steps in the ratio progression to provide ‘gears’ for a manual override mode, but the DCT has supplanted it.

CVTs tend to be unsatisfying to drive, often feeling as though a clutch has started to slip, but uniquelythey allow the driver to experience the odd sight of a speedometer needle rising as a revcounter needle is falling, achieved by gradually easing the accelerator. This is almost certainly the last time you’ll read about that in Drive-My.