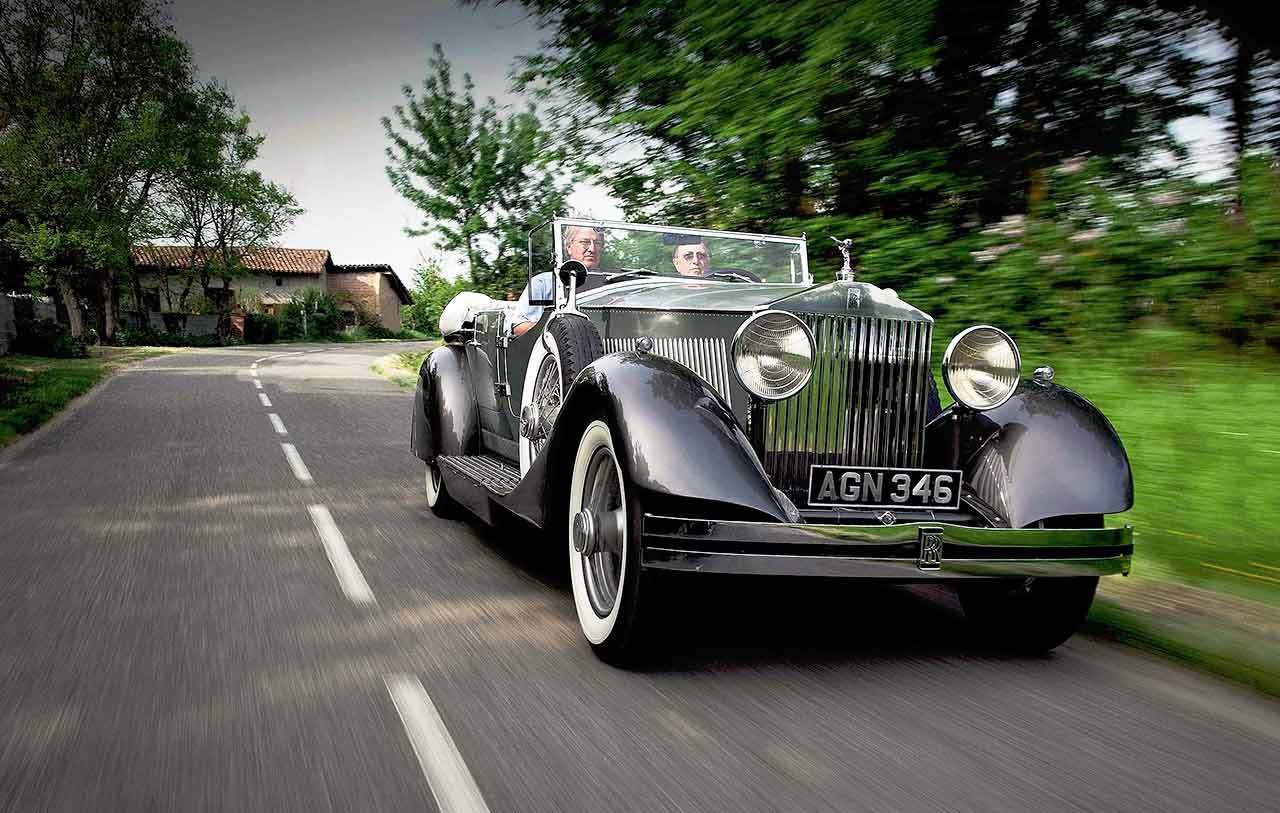 An experiment in style Rolls-Royce 25 EX. A prototype Phantom II with a phenomenal body. To Rolls-Royce, Chassis 25 EX was one more experiment in the quest for perfection. To J Eskdale Fishburn, it was a blank canvas for the expression of newfound style. Words Dale Drinnon. Photography Martyn Goddard.

After all these years it just seems right to sit on the rich red leather, look past the big black steering wheel and out across that impossibly long bonnet and see fresh, green, French countryside flowing past once again. On the way to someplace interesting and exciting, someplace worth driving to, and driving there with great style and a certain dash. That’s what the people had in mind who first built 25 EX, and that’s certainly what the remarkable owner had in mind when he made the car into one of the most striking and dramatic Rolls-Royces ever to grace the road.

And it was, after all, the French countryside that changed the way Rolls-Royce approached motor-car design. From its earliest days, the company had road-tested in France; besides the obvious benefits of far less congested and constricted highways than those on its own crowded little island, it must surely have been comforting to enjoy a bit of distance from the prying eyes of the British competition.

By the mid-1920s, such testing, doubtless combined with the experiences of Sir Henry Royce himself while commuting to his winter base on the Côte d’Azur, had made plain that Rolls-Royce performance on the great open roads of the Continent, using technology largely unchanged since before the Kaiser War, left something to be desired. For Sir Henry, this wouldn’t do, especially with more and more owners elbowing the chauffeur aside and blasting off for Riviera adventures of their own, expecting their Royce to track the Route Nationale at 70 with the same aplomb with which it cruised The City at 25.

So Sir Henry set out to rectify the situation. Almost from the day the New Phantom replaced the venerable Silver Ghost in 1925, he was planning for the Phantom II – which would be the last Rolls-Royce developed under his direct engineering guidance. His objective was a car with improved handling, stability and power, capable of safely carrying the plush, heavy bodywork his customers favoured while maintaining the high average speeds European conditions encouraged. A shorter-wheelbase version called the Continental would even be pitched specifically at the enthusiastic cross-country owner-driver, and it’s worth noting that the Phantom II’s internal designation during development – not to mention Sir Henry’s preferred name for it, pooh-poohed like most of his more progressive ideas by the sales types – was the Super Sports. The first experimental unit, issued like all the works experimentals with an ‘EX’ chassis number, was 18 EX, completed in November 1928. A dozen experimental Super Sports were issued in total, the later examples coming well after the Phantom II officially arrived in 1929. Chassis 25 EX was one of those later cars.

Equipped with a traditional black Park Ward limousine body and finished in July 1930, it had the standard PII upgrades (unitary engine and transmission, crossflow head, underslung rear suspension, massively lowered roll-centre, and a general overall trend toward modernity) and, like 24 EX before it, was outfitted in left-hand drive to test US-market components. Unlike 24 EX, however – these two were the only LHD cars in the fleet – 25 EX actually went Stateside for trials by the Springfield factory staff. They weren’t crazy about the ride quality, but the high-speed abilities drew raves.

It spent its obligatory time in France, too, in 1931: 25 EX’s log shows 5000 miles for August alone, travelling through Geneva, Grenoble and Reims, in addition to the testing HQ at Châteauroux, south-west of Paris. Noise and vibration were high test priorities, but steering and damping also received extensive scrutiny, and one driver tellingly concluded a lengthy post-journey analysis with ‘car perfectly safe and stable at 80mph or over’.

After more than 20,000 hard miles in Europe, 25 EX returned to the UK that September, and the flogging continued. On retirement in January ’1933, the car had clocked 59,216 miles at the hands of RR’s great, including MD Claude Johnson, experimental department head Ernest Hives and, naturally, Sir Henry.

Despite the mileage, 25 EX was considered fit for refurbishment and sale on its original chassis number; many stablemates were scrapped after testing, and virtually all Super Sports were renumbered. Once relieved of limo bodywork for transfer to another EX, 25 EX was sent to Barkers to be fitted with a conventional open tourer body and join humdrum civilian service. Had the purchaser merely been your run-of-the-mill consumer, the interesting part of the tale would end here.

But there was nothing ordinary about John EskdaleFishburn.Hewasbornin1894inLondon of a Yorkshire family. An ancestor had built Endeavour on which Cook discovered Australia, and his father was a prominent art dealer. Fishburn studied dentistry while doing destroyer duty on the Gallipoli run, and convinced the University of Malta, his nearest port of call, to conduct exams and grant him a degree.

Then he abandoned medicine and spent much of the ’20s travelling the world, before settling into a career as an inventor and entrepreneur. J Eskdale Fishburn developed the pari-mutuel betting Tote machine, and the Automaticket device for cinema ticketing. He became CEO of the Bell Punch Company, leader in mechanised ticketing systems critical to urban mass transit, and expanded it into one of Britain’s biggest printing firms as well.

In the early 1930s, at the peak of the Depression, Fishburn was commuting to a second office, just like Henry Royce, except his was on Wall Street and the trip was fortnightly, via Cunard liner. He had a luxury apartment atop the tallest building in fashionable Piccadilly and an Isle of Wight getaway home where he kept his offshore power boat. The gossip columns followed his social life. Style and dash he had to burn.

When Fishburn bought 25 EX, any likelihood of conventional bodywork was therefore straight out the window. He took it to coachbuilders Whittingham & Mitchel, sat down with the panelbeaters and said, ‘Here’s what I’d like you to build for me, gentlemen.’ Looking back, son Dale Fishburn recalls that, while his father was neither an engineer nor particularly obsessed with cars, his fascination with things mechanical and maximising their application meant he knew exactly what he wanted from this one, from the longest possible bonnet to the very un-Rolls-Royce-like colour scheme. Which, oddly enough, wasn’t really that un-Royce-like: Henry Royce didn’t especially care for the typical sombre black treatment either.

Fishburn had evidently absorbed much during his travels, too. Elements of his design would be right at home on a Duesenberg J or a Hispano-Suiza: the rakishly angled cut-down doors, the spatted rear wings, the louvred side valances – everything about the car exudes confidence. He also plainly appreciated the car’s road potential; noted in the sales record are the observations ‘keen on speed’ and his fondness for Continental driving, which Dale says sounds completely like his father. ‘There’s a story that he once took off for the South of France just to field his wife-to-be, my mother, because he thought she might be seeing a bit too much of another man over there…’

Alas, his bachelor chapter closed, Fishburn sold his creation to an American buyer shortly after World War Two. It passed through several hands, arriving in the Frank Cooke collection in 1971, a year before J Eskdale Fishburn’s passing. Then, following Cooke’s own death in 2005, it returned to Britain.

In 2009, 25 EX came to Royce specialist Ivor Bleaney, who gave the car some long-overdue fettling. At the Beaulieu Autojumble that autumn, Jean Pierre Gelis, visiting from Toulouse to shop for miscellaneous Jaguar spares, happened to notice a nice Rolls-Royce dual-cowl phaeton on the Ivor Bleaney display.

Fortunately, it wasn’t 25 EX: Jean Pierre doesn’t speak much English and, by the time he returned home and asked family friend Chris Hatton (of Toulouse car specialist Marcassus Sport) to call Bleaney and inquire, that one had been sold. But, they said, we do have this other car you might like if you’re looking for something truly unique. Chris asked close associate and fellow Morgan dealer Richard Thorne to take a look; the results were most favourable and, when Jean Pierre went with Chris and Richard to inspect 25 EX in the metal, well, it was all over.

Seventy-eight years after leaving France for a future unknown, 25 EX returned, in glory. ‘I went to Beaulieu looking for some screws to install a Brooklands screen,’ Jean Pierre says, ‘and I wound up with this instead.’ And as we flow through the fresh, green, French countryside, both he and 25 EX seem perfectly, utterly at home with that.

‘The rakishly angled cut-down doors, the spatted wings, the louvred side valances – everything about the car exudes confidence’

Above, right and left Sir Henry Royce used to test his cars in France, and this experimental car covered thousands of miles in Europe before being dramatically re-bodied by coachbuilders Whittingham & Mitchel. Appropriately, it’s now back in France. Above and left The rakish J Eskdale Fishburn, and the Rolls he had coachbuilt to match.