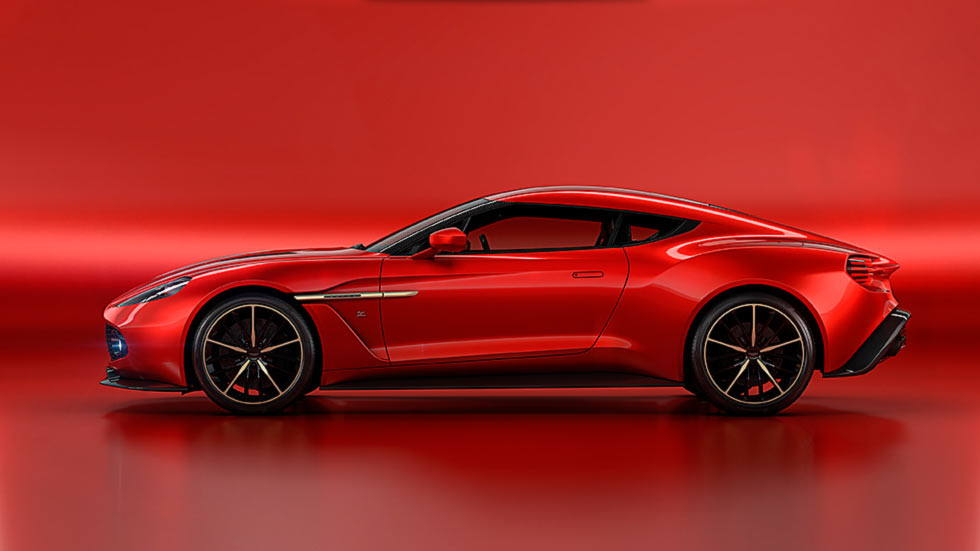 The new car was unveiled at the prestigious Concorso d’Eleganza Villa d’Este on the banks of Lake Como, Italy, just as this issue of Vantage went to press. That’s the same event at which the 2011 V12 Zagato was unveiled, and the Vanquish Zagato follows on from that model in style but is even more comprehensively equipped, making it the most luxurious Aston Martin yet made.

The model is the result of a close collaboration between Andrea Zagato, company CEO (and grandson of founder Ugo Zagato), and Aston Martin’s chief exterior designer, Miles Nurnberger, the whole project overseen by design director Marek Reichman. The bodywork is produced in large, one-piece carbonfibre panels that reduce split lines in the body and help to keep weight down. 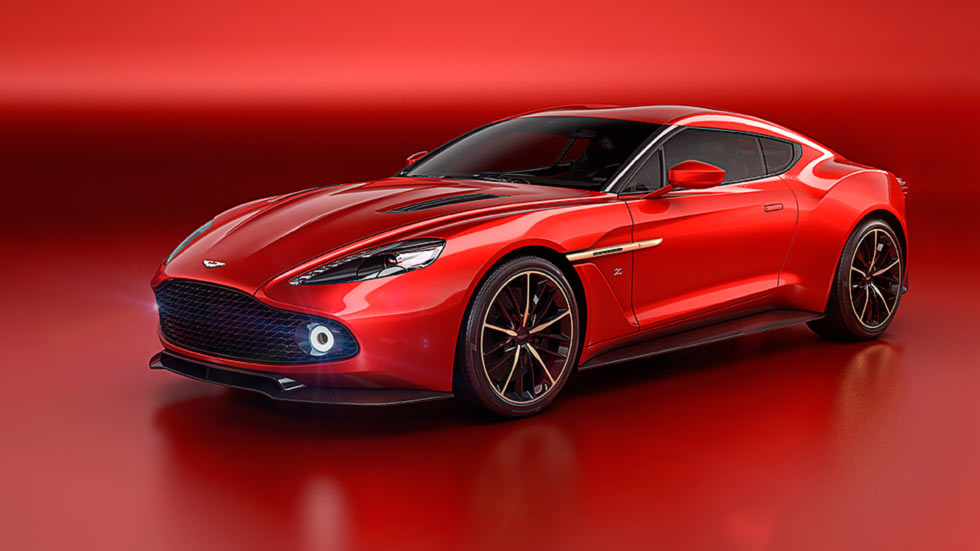 It’s certainly what we’ve come to expect of an Aston Martin Zagato: lighter and more powerful (with 600bhp) than the donor car, good-looking and yet unashamedly aggressive, and possessing certain design cues that have defined these limited-edition models since the very first, the DB4 GT Zagato, broke cover at Earls Court in 1960.

‘There’s a brutality about the DB4 GT Zagato,’ says Reichman, ‘and it’s very powerful, but it’s delicate in places. too, like those slim pillars and the chrome around the headlights. The rear wing grows the muscle – it looks like it’s grown the bodywork out to the side. That mixture of brutality and beauty; that’s typical Zagato, surprising and kind of disruptive. Aston Martin is about elegance; Zagato disrupts that.’

The modern-day interpretation of that is clear to see in the new Vanquish Zagato. The huge front grille, the bulging rear wings, the exaggerated front overhang and the truncated tail with deploying spoiler make for a car that’s racier and more powerful-looking than the majority of the Aston Martin range, and, just to allay any doubt that this is a Zagato, there’s the double-bubble roof, a Zagato trademark since the ’50s (though it didn’t feature on the DB4 GT Zagato).

‘It’s about changing the balance of the car,’ says Reichman. ‘It’s less what we’d perceive as perfect balance. For racing you want a shorter tail, for less weight.

We’ve cut the roof too – not physically, more of a visual cut that makes the windscreen look like the visor of a helmet.’ 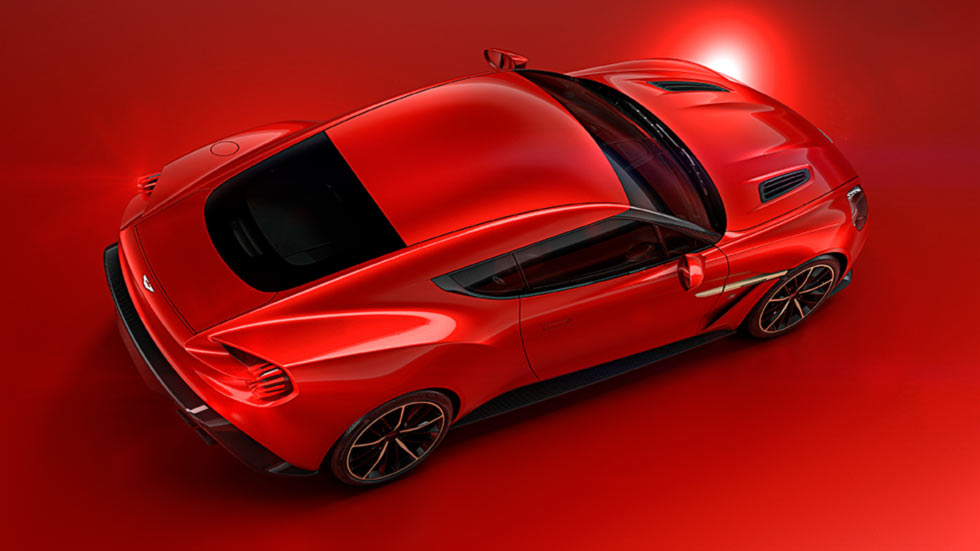 There are plenty of obvious Aston Martin influences too: some elements reference the new DB11, especially the aerodynamic profile, and other influences can be seen in the mirrors and rear end (One-77), the bladed LED rear lights (Vulcan) in classic round Zagato style, and the strake running from wheelarch to door (CC-100 concept and DB11).

And the huge front grille? ‘The DB4 GT Zagato is all grille,’ says Miles Nurnberger. ‘Aston Martins have a two-piece grille, with a lower intake, but we needed to find a way to have that Zagato face; so we have a large one-piece intake on the Vanquish Zagato, with floating DRLs [daytime running lights] and the grille made up of Z-shapes.’

Inside, it’s just as striking, with aniline (uncoated) leather – ‘It feels like the most amazing nubuck,’ says Reichman – quilted in a unique pattern that, unsurprisingly, references the classic Z-shape.

Switchgear is knurled aluminium, interior brightwork gets a bronze metallic coating and the finishing will be of an even higher quality than that of the current top-of-the- range Vanquish.

Thus equipped, the Vanquish Zagato builds on a small but highly collectable range of Aston Martin Zagatos that was initiated by both David Brown’s and Ugo Zagato’s fascination with motor racing and their wish to beat Ferrari in the important GT World Championship of the early 1960s. The resulting DB4 GT Zagato, built on the short-wheelbase DB4 GT and clothed in lightweight, thinner-gauge aluminium, was driven by now-legendary drivers, including Jim Clark, Innes Ireland, Stirling Moss and Roy Salvadori. Four of the 19 built went on to compete in the 24 Hours of Le Mans between 1961 and 1963.

After that, the Aston Martin collaboration went cold until 1986, when the 186mph V8 Zagato – an angular, divisive interpretation of the DB4 GT Zagato – was released to the surprise of the automotive world. Just 52 were built as coupés and 37 as convertibles.

It then took until 2002 before the two companies would work together again, with two variants of essentially the same model, the coupé DB7 Zagato and the open top DB AR1 (the AR standing for American Roadster), both based on the V12 DB7. These saw a return to the DB4 GT Zagato’s curves and characteristic front grille; 99 of each were built.

The relationship was rekindled again in 2011 for the next model, the V12 Zagato, which was released to celebrate the 50th anniversary of the DB4 GT Zagato’s production. Once again 99 were built, with two race versions, Zig and Zag, produced for the Nürburgring 24 hours race, and all sold almost immediately, cementing the highly collectable status of an Aston Martin Zagato.

‘You’re not a shrinking violet if you buy a Zagato; you’ve made a courageous choice,’ summarises Marek Reichman. ‘We want customers to use their cars, to show them off. That’s one of the reasons why we based this one on the two-plus-two Vanquish. Customers will be able to drive for long distances; it’s for elegant, exciting journeys. If I could have, I’d have made that drive to Villa d’Este, all the way over the San Bernadino Pass. It’s made for journeys like that.’

Some they made earlier

The relationship between Aston Martin and Zagato goes right back to the start of the 1960s. The DB4 GT Zagato was unveiled at the 1960 London Motor Show and production began the following year. It continues to be an inspiration.

2011 V12 Zagato was based on the dazzlingly rapid V12 Vantage. Aston’s Marek Reichman oversaw the styling