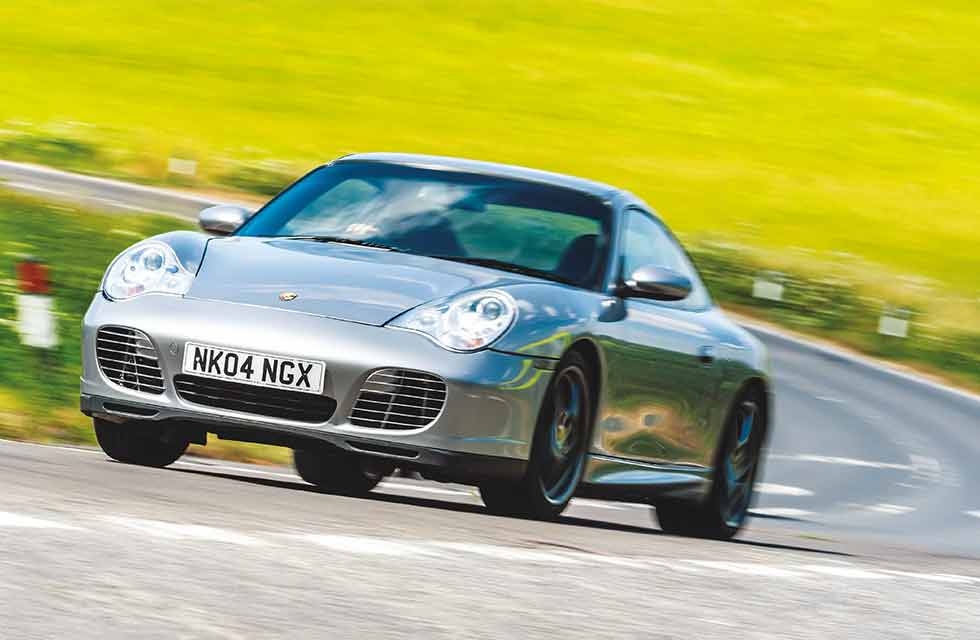 Silver Anniversary The rare and often overlooked 40th Anniversary special edition 911, the ‘40 Jahre’, might just be the best 996 you can buy today – here’s why… Story: Philip Raby. Photography: Antony Fraser.

The Porsche 911 996 has always been the source of controversy and, as the first all-new 911 since the original 1963 car, that was bound to be the case. Even more so if you factor in the point that it was the first 911 to have – shock, horror – a water-cooled engine, not to mention those re-imagined headlamps. Thankfully, 20 years after its launch, the Porsche world has got used to the 996 and the majority of enthusiasts embrace it for what it is – a true 911 and, today, a modern classic in its very own right.

Although the standard 996 Carrera is good in isolation, it spawned some stonkingly great 911s. Think of the Turbo, GT2, GT3 and Carrera 4S and you’ll understand what I mean. However, I’m going to throw a fresh bit of controversy into the mix and suggest that all these are eclipsed by another, lesser known and often misunderstood 996. And that car is – wait for it – the 911 40th Anniversary. At this point you’re probably thinking “Really? Surely a GT3 or Turbo is a better car than some special edition?” Well, fair point but do bear with me on this.

Let’s start by finding out what the 40th Anniversary really is. In 2003, the Porsche 911 celebrated its 40th birthday so, just as it did ten years earlier with the 964, the company released a special edition 911 to celebrate. Although, in a most un-Germanic way, Porsche ran a little bit late and the majority of 40th cars were sold in 2004.

Just 1963 were built, in a nod to the year that the 911 was launched and, of those, it is believed that around 200 right-hand drive examples came to the UK. Each Anniversary had a unique number, stamped onto a ‘911 40 Jahre’ plaque positioned on the centre console, just in front of the gearlever.

Every 40th Anniversary 911 was, as far as I can determine, finished in GT Silver Metallic a colour which, up until then, had only been offered on the Carrera GT supercar. This is a deeper, greyer shade than the rather more usual Arctic Silver of the day and, it has to be said, looks stunning. Possibly rather less impressive were the original 40th Anniversary wheels which, for some unfathomable reason, Porsche decided to finish in a chrome effect. It is perhaps these blingy wheels that led to many people misinterpreting the 40th as being nothing more than a tarted-up standard 996.

Thankfully, today many of these glitzy 18-inch Carrera alloys have been refinished in a standard silver or, as in the case of the car I’m driving today, a tasteful gunmetal grey.

The other big visual change to the 40th Anniversary is the Turbo front spoiler with its massive intakes which, uniquely, are finished with body-coloured slats. These look the part and the colour coding certainly distinguish the car from the Turbo, but I just wish Porsche had blacked-out the upper inward quarters of the intakes where they’re blocked off – take a look at the photos and you’ll see what I mean. Additionally, there are stylish Aerokit sill extensions while, out back, is a ‘911 40 Jahre’ tail badge. There’s no doubt that this is a great-looking Porsche.

There are more treats inside. As well as the aforementioned numbered badge, the centre console is finished in GT Silver, while the hard-backed Sports seats are clad in dark Natural Grey leather which has a unique perforated pattern. The leather extends, not only to the dashboard and door panels, as per normal, but also to the beautifully stitched steering wheel boss. Add a Bose sound pack, silver bezel surrounds, plus unique 911 sill plates, and this is a very plush place to be, indeed. Speaking of that leather, the 40th Anniversary was sold new with a set of matching leather luggage but, sadly, I have yet to find a car with this still intact.

However as nice as the interior and bodywork additions are, these are not the things that genuinely set the 40th Anniversary apart from other 911s. No, the really exciting aspects of this car can’t be seen. First of all, it has the rare the X51 Power Pack which takes the engine output to 345hp; 25hp more than standard. This was an option on other 996s but, with a book price of around £8,000, it was a box that buyers rarely ticked.

The X51 Power Pack was expensive because it was far more than a simple remap. It consisted of an intake manifold with a modified cross-section; unique exhaust manifolds with a larger cross-section to optimise gas flow; cylinder heads with optimised inlets; camshafts with larger inlet valve stroke plus modified inlet and outlet timing; uprated inlet valve springs; modified partition box in the oil sump; plus a modified ECU map.

The other upgrade is Sports suspension which is lowered by 10mm and firmed-up to improve the handling, which is further aided by Porsche Stability Management system (PSM to its friends).

To put that 345hp into perspective, that’s second only to the 381hp GT3 in terms of naturally-aspirated 996 power, while the mighty 996 Turbo produces 420hp. Of course, numbers don’t tell the full story; you need to drive the 40th Anniversary to appreciate it fully, so we’d best do just that.

As soon as you start it up, it’s apparent that this engine is different to that in a standard 996 Carrera; it has a deeper, fruitier burble. On the move, there’s noticeably more torque and power, even at surprisingly low revs. It’s eager to be let off the leash, though, and once you hit 6,000rpm, the power really kicks in and you’re rewarded with a true 911 wail. Being a two-wheel drive 996, all the power is pumped to the rear wheels so you get the pure 911 feel, just like with a GT3. Now, I’m not one of those purists who insist that all 911s should be two-wheel drive, and as much as I like the four-wheel drive 996 Carrera 4S, there’s no denying that this car feels noticeable lighter and more nimble, thanks to its simpler drivetrain and narrow body.

It’s partly that compactness which makes this 911 so much fun to fling through corners, and partly the Sports suspension. This is firm but not overly so, remaining much more compliant than a GT3’s chassis, so it’s ideal for our less than perfect UK back roads. The handling is predictable and controllable; turn off the PSM and you can get the back end out when it’s safe to do so. This is a 911 that wants you to play with it.

Couple the handling with the extra power and you have a winning formula. But why do I think that the 40th is better than a GT3 or Turbo? Don’t get me wrong – these are both fantastic machines, but there are things that make the 40th a more complete package. Let’s start off with the GT3. Yes, that gives you more power but the suspension is overly hard for road use (certainly in the UK) and you can find yourself getting knocked off line if you hit a bump mid-bend, not to mention the discomfort to you and your passenger. And that’s ‘passenger’ singular, as there are no rear seats in the stripped out GT3. Although a near-perfect trackday weapon, even the most dedicated enthusiast would be hard-pushed to use a GT3 as a daily driver, whereas the 40th is an incredibly usable car. It’s also at least half the price of a GT3…

But what about the 996 Turbo? With 420hp and a fully specified interior, surely this is a better car than a 40th Anniversary? Well, it all depends on what you are looking for. If you want outright power and acceleration, or a transcontinental luxury missile, then of course the Turbo is unbeatable. However, if you’re looking for a fun car to hack around winding country roads and perhaps take to the odd trackday, then the 40th is the better choice, as the narrow body and rear-wheel drive, combined with the uprated suspension and engine, undoubtedly give it the edge in terms of ‘thrashability’.

The 40th Anniversary also has the edge in terms of collectability. Around 200 came to the UK but it’s fair to assume that less than that number remain (we know of at least one that’s been exported), so it’s a rare Porsche, indeed. That surely makes it a good long-term investment – just look at values of the 964 30th Anniversary edition which have rocketed in recent years.

So, rareness, power, handling, looks, practicality and a high specification – the 40th Anniversary has it all. And that’s why, in my mind, it’s one of the greatest 911s of all.

Why do I think that the 40th is better than a GT3 or Turbo?