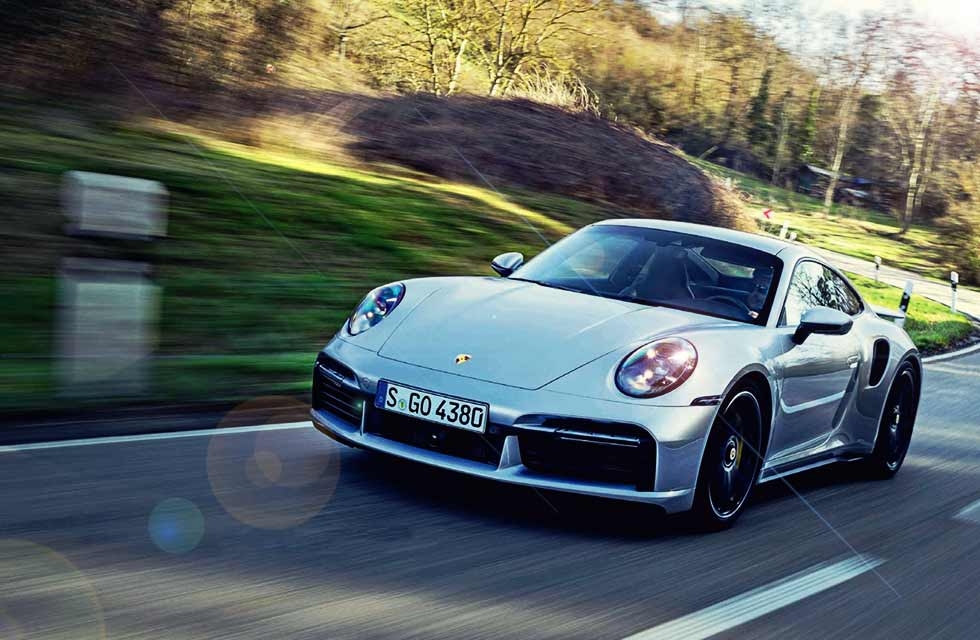 The accidental terrorist If you’re used to 911 Turbos being soft and easygoing, time to adjust your expectations. This new one is a full-on supercar.

When Gustl Achleitner handed Frank Walliser the keys to the chief engineer’s office at Porsche last year, the DNA of the sports car family took an invisible step towards more extreme dynamics. That’s what you get when you appoint a man whose CV features the 918 Spyder and RS Spyder, 919 and 911 RSR race cars.

Previous Turbos were, to an extent, aimed at graciously greyed gentlemen who enjoyed showing off in a prestigious piece of street furniture that made a statement about wealth and about not being ready for the retirement home. Those silver foxes will still be drawn to this 992-generation 911 Turbo S. But beneath the skin lurks a very different animal: raw, aggressive, more tactile, so much faster, and not as easy to drive at the limit.

At a glance, our test car looks like the predictable evolution of a well-established licence to print money. The track has been extended once again, this time by 42mm up front and 10mm in the back, the adaptive wing-work is even more elaborate, the shiny multi-spoke wheels are shod with wider Pirelli P Zero rubber (255/35 ZR20 front, 315/30 ZR21 rear), and the fresh make-up includes matrix headlights as well as four fat tailpipes.

Well, this initial impression of modest evolution is thoroughly misleading. This is not a sugar daddy’s boulevard cruiser or relaxed high-speed GT. The new Turbo is a hardcore sports car worthy of RS badging.

Did I say sports car? Make that supercar. Because this 992 Turbo can out-sprint the Ferrari F8 Tributo, leave the Aston Martin DBS Superleggera trailing in its dust, and give the McLaren 720S a run for quite a bit less money. It’s that good, and in terms of value for money, it plays in a league of its own.

The 991.2 Turbo S was a remarkable piece of kit – super-quick in a straight line, entertaining through the twisties, totally forgiving 24/7.

The 992 is hyper-quick off the mark, even more involving at the limit of adhesion and challenging as well as rewarding to a still greater degree. It improves road-holding simply by putting quantifiably more rubber on the ground. And it scores big points for handling thanks to the faster rear-wheel steering, quicker damper control and the optional (£1052) PASM sports suspension, which lowers the car by 10mm. The 10-piston front calipers and larger carbon-ceramic brake discs all-round will pulverise all the stopping distances you may have recorded on your memory chip. And instead of relying exclusively on the time-warp ASR and DSC software, the Turbo is equipped with a comprehensive set of advanced adaptive aerodynamics which works by balancing the movements of the extending front air dam with the adjustable multi-stage whale-tail.

In the fastest Porsche currently available, how fast is fast? Although power and torque are increased (up by 69bhp and 37lb ft respectively), top speed is an unchanged 205mph. This is due to more substantial drag, which varies between 0.33 in streamlined Eco and 0.38 in Performance. See also a 40kg increase in kerbweight to 1640kg (bigger wheels, eight-speed PDK, emissions hardware, additional cooling).

In terms of acceleration, however, the new Turbo S shaves 0.2sec off the 0-62mph time – now a blistering 2.7sec – while covering the 0-125mph stunt in an even more thrilling 8.9sec, one full second faster than the outgoing model. True, the 691bhp GT2 RS is marginally quicker still, as well as 6mph faster overall. But the 641bhp Turbo S beats it in the torque department, by 590 versus 553lb ft, and its eight-speed PDK throws in an even grabbier first gear (made feasible by the Turbo’s all-wheel drive), a taller top gear and a more relaxed fuel-saving final drive ratio. (Depends on the driver, of course; we recorded 14mpg.) The Porsche is insanely quick throughout the entire rev, gear and speed spectrum, and yet it squashes unwanted velocity just as comprehensively. Its antidote to launch control is a riveting stopping apparatus crowned by an eye-catching pop-up airbrake that momentarily darkens the rear-view mirror when deployed.

What’s not to like? Well, the price has gone up, and plenty of attractive features are options, not standard. Furthermore, electrification, head-up display and advanced driver assistance are not on Frank Walliser’s agenda. The engine doesn’t sound great, even when fitted with the extra-cost sports exhaust. The lowered suspension systematically crushes the low-speed ride. And some mod cons such as the electric pop-out door handles and the busy infotainment touchscreen are a debatable interpretation of progress.

On dry and reasonably even tarmac, the Turbo S tracks with confidence-inspiring precision, but let it rain and the fun stops. It will aquaplane, it will feel insecure on lane changes and the otherwise impeccable stability becomes intermittently indifferent.

Like all Porsches, the 992 Turbo S offers that frustrating yawn-a-mile Eco mode which activates start-stop below 10mph and selects the tallest possible gear at any given time. At the other end of the scale there’s Sport Plus, which combines with the Performance aero setting to pull out all the stops. Auto upshifts are now delayed and delayed further still, downshifts strike early like unexpected lightning on a hazy day, the rear air rudder assumes a flatter stance at about 95mph before switching to a fully horizontal profile above 162mph, and the dampers firm up like four shaken champagne bottles close to popping their corks.

Fast-forward in Weissach’s latest batmobile is an intense experience. At nine-tenths the driver can do almost no wrong, but the last step towards total satisfaction is a dare for man and machine. The GT3 RS and GT2 RS are in different ways similarly involving, but no 911 992 has ever been as disarmingly multi-talented as this Turbo S 992.

There is no plug-in cable and it cannot drive itself. But if I had to choose a car to keep me going for the rest of my life, this is it

Did I say sports car? Make that supercar. It’s that good, and in terms of value for money it plays in a league of its own

That’s what I call a Perfect Driving Position, even though only four of the five dials are visible

Where’s the dark mode button, to keep the in-car digital overload from driving me nuts?

It exists, even if only in my dreams