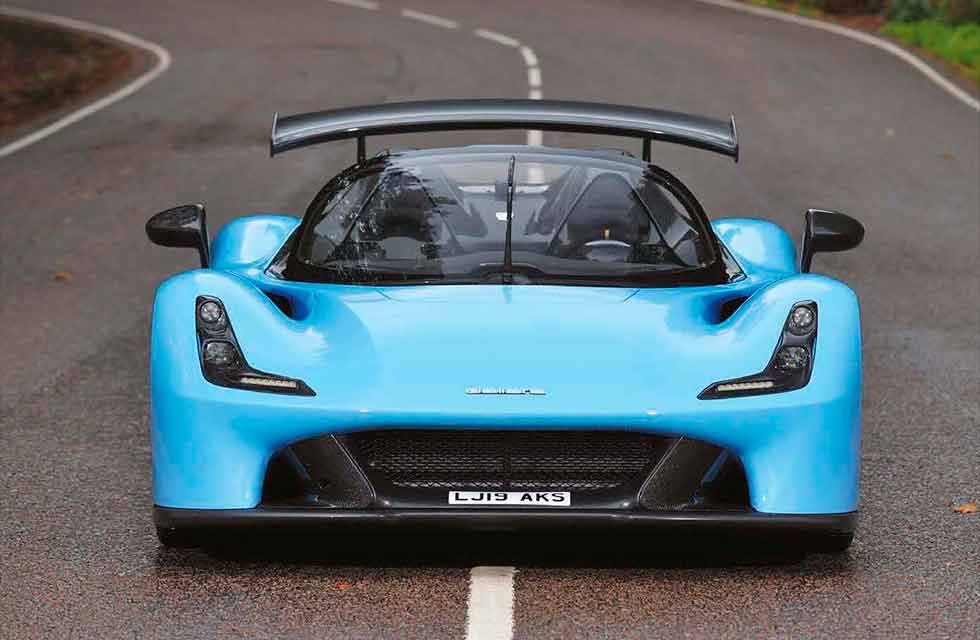 2021 Dallara Stradale – Road-legal track car. Racing drivers know the Dallara name, but never before has the Italian racing car maker built a road car. The new Stradale addresses that in spectacular style, as we discover in our UK road test. Story by Chris Rees. Photography by Michael Ward.

Racer for the road – on UK roads – Hit the Road, Giampaolo

Honestly, I lost count of the number of times people asked me, “What’s the car?”. Saying, “It’s a Dallara” rarely elicited a scintilla of recognition. You really have to know your motorsport to recognise the badge – but what a badge it is. As well as an illustrious history in Formula 1, the Italian constructor is currently the sole supplier for Indycar, F2, F3, GP3 and Super Formula championships, as well as making cars for Formula E, WEC and others. Quite some CV.

“In the wet, full beans in a straight line causes the tail to snake and full-on circumspection is required around bends”

Not that Dallara is restricted to building racing cars. It’s been the go-to brand for supercar makers when they want expertise in carbonfibre and aerodynamics, and Dallara has partnered up with all sorts of big names in recent years, including Alfa Romeo (helping out developing the 8C and 4C), Bugatti (Veyron and Chiron), Maserati (MC12), Ferrari, Lamborghini, KTM and others.

Frankly, the fact that Dallara has never made its own road car is a surprise. It’s a natural progression but it’s been a very long time coming. Giampaolo Dallara founded his company almost 50 years ago. He cites Colin Chapman, and particularly the Lotus Seven, as his inspiration, and he thinks Chapman would have approved of his Dallara Stradale (which simply means ‘road car’). I think so, too. Like Lotuses, the Stradale is all about focus: going fast and delivering the best possible driver feedback.

Aesthetics are perhaps secondary. Frankly, this isn’t the prettiest supercar in the world, but that’s not really the point. I do think it looks much more effective in the flesh than in photos. The design is by Lowie Vermeersch’s Granstudio. In its basic form, it’s a classic doorless barchetta. As tested, it’s in ‘roadster’ configuration with the addition of a polycarbonate windscreen. You can also add a carbon T-Frame to turn it into a targa, and then additionally opt for gullwing ‘doors’ (effectively upward-opening windows), transforming it into a coupe. The whole LMP-style canopy weighs a mere 35kg.

Aerodynamics play a big role in how the Dallara performs. Unlike most road cars, the aero is a significant part of the driving experience, already clearly discernable at quite low speeds (as little as 50mph). The carbonfibre underfloor is perfectly flat except for its deep venturi tunnels, while a front diffuser offers aerodynamic balance. ‘Our’ car comes with the optional – and huge – rear wing, which is claimed to add “exceptional levels of downforce” for the track. It’s easily removable if you want, which you might wish to do to boost top speed (this rises from 165mph with the wing to 174mph without it).

Getting into the Stradale is an art form, but easily learnt. Swing your leg over the doorless side and aim your foot at the aircraft-inspired ‘Step Here’ indentation in the middle of the seat. Then swing your other leg over and hunker down. Once in position, you arrive in a fabulous legs-out driving position with a four-point harness pinning you in place – all very redolent of racing practice. The sparsely padded seats don’t move, but the pedal box does: you can adjust it fore and aft by pulling a lever tucked neatly away to your left.

Letting you know that a huge percentage of the car, from the chassis tub to the bodywork, is made of carbonfibre, exposed carbon is on view pretty much feels every inch the manicured supercar. When gripping the steering wheel (which is generously adjustable for reach), you note the racing centre marker and admire the Group C-style single central wiper. Instrumentation is sparse but focused: just a simple carbon-rimmed digital display.

The Stradale is a pretty wide car but mounting the mirrors on the wings means it’s not as wide as most supercars. Its vertical sides make it pretty easy to judge in traffic, except for the huge blind spot raised by the head fairing, which makes exiting diagonal junctions a nightmare.

The most common question I was asked during my test was, what engine lies under the lid? Surely an Italian thoroughbred powerplant – Alfa V6, perhaps, or Ferrari V8? Nope. You might be surprised to hear it’s Ford, in the form of an EcoBoost unit. But it has been heroically breathed upon – for instance, using its own special turbo and single-mass flywheel – making it far more ‘boost’ than ‘eco’. It delivers its peak of 400hp at 6200rpm, with plenty of torque from low revs. When you start the car up, it actually defaults to 300hp and you have to pump the ‘HP’ button on the steering wheel to turn the wick up to the full-beans 400. I really don’t know why Dallara doesn’t just keep it in its high power setting as a default; 400hp proves perfectly usable on ordinary roads.

The only exception is launching the car off the line, which does require circumspection, but once the car is rolling, it just races away. Really races. Torque is everywhere and there’s zero discernable turbo lag, while the extreme light weight makes performance in any gear utterly intoxicating. Considering the engine has only four cylinders, it sounds pretty good, too, with an exhaust that crackles deliciously on the overrun. But in the aural department, a Lamborghini V10 it ain’t.

Self-shifting fans will be pleased to hear that the gearbox is a six-speed manual. Unfortunately the gear lever – taken straight from a Ford Focus, I think – has a long shank and a slower, notchier change than you’d expect of a car like this. A faster change with a snappier shift would definitely suit it better. There’s an optional paddle-shift robotised gearbox with Normal, Sport and manual settings, but this adds weight.

Delicious change-up lights on the dashboard display illuminate in sequence and then flash to let you know when the rev limit is being reached and you need to shift up a gear. The final drive ratio is surprisingly lofty, equating to 27mph at 1000rpm – I was expecting lower gearing to maximise acceleration. One thing you won’t fail to notice is the mechanical whine of the differential at low speeds.

Sadly, the desperately damp conditions of our road test meant we didn’t get to test out grip on a dry surface, which I suspect would be awesome on the Pirelli Trofeo R tyres fitted (Dallara claims lateral acceleration of more than 2g). Let’s just say that the semi-slick black circles proved, ahem, extremely feisty in the wet: full beans even in a straight line caused the tail to snake, while full-on circumspection is called for through the corners. Bosch ESP stability control is fitted, but again we never felt brave enough to deactivate it due to the appalling weather.

Dallara claims that downforce is among the best of any road car, maxing out at more than 820kg at the car’s top speed of 174mph. Our test car was fitted with adjustable dampers, which can be toggled between Road and Track, the latter lowering the suspension by 20mm (and thus not really recommended for roads with sleeping policemen). I was constantly surprised by how good the ride quality is.

So let’s come to one of the main reasons why you’d want to buy a Dallara: its steering. With so little weight over the front end, it doesn’t need power assistance, and the system is ultra-direct and as feelsome as a racer. It’s also free from deflection caused by bumps in the road, something that often afflicts lightweight cars, and that gives you great confidence to attack. And when the tail does break away, it all feels very benign and neutral. The brakes are awesomely powerful, too. It takes a short while to adjust to their instantaneous bite but once dialled in, you can lean on the middle pedal with absolute assurance.

Useful storage bays can be accessed by folding the (lockable) seat backs forward – each one can fit a helmet in it. And what’s the little stubby thing between the head fairings? It’s a camera that comes with the optional GPS/HD kit, perfect for recording those record-breaking laps. There’s even a mini ‘tent’ to keep the cockpit dry when it rains, and guess what – we used it a lot!

The Stradale is on sale now in the UK, priced from £143,500, via the UK agent, Joe Macari of London. A few cars have already been delivered to British customers but you may need to move fast to get one, since Dallara has set a firm limit of only 600 units worldwide.

So what to make of this Italian race track escapee? Most all-new low-volume road cars feel somewhat half-baked. Absolutely not the Dallara. It’s fabulously accomplished. As you’d expect of an outfit whose daily business is making top-notch race cars, Dallara’s first ever road car feels like a raw, barely tamed driver’s machine, while also being brilliantly conceived and superbly made. Respect is due.

ABOVE: We followed Dallara at last year’s Best Of Italy. BELOW: Ultra-focused drive features super-sharp steering and mighty brakes.

Enormous rear wing is an optional extra, boosting downforce at the expense of top speed. You can feel the aero working at 50mph. You certainly know the Dallara is mostly carbonfibre, as it’s on show almost everywhere, including the HD camera.