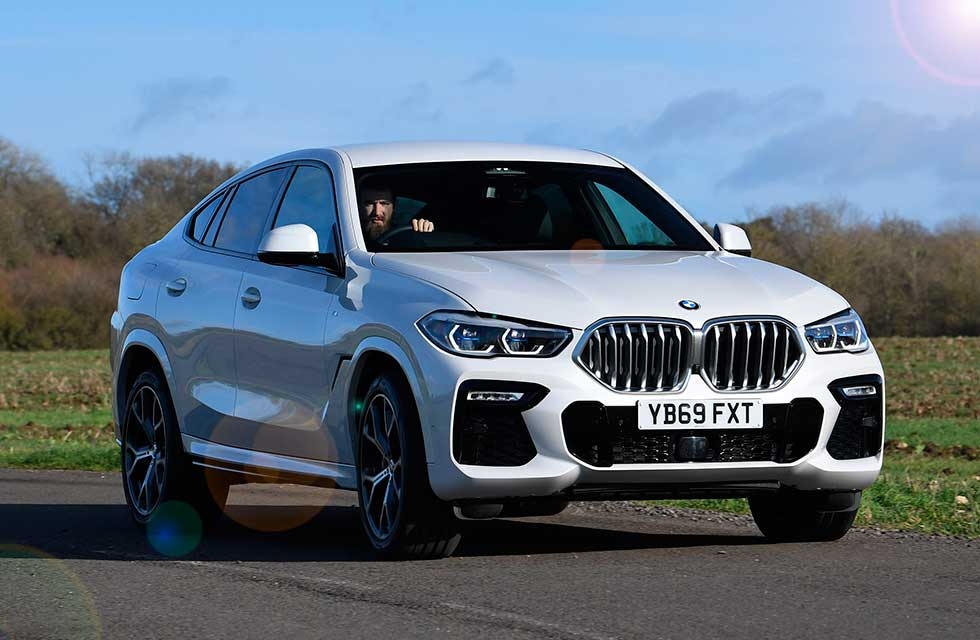 Not everyone approves of the BMW X6’s image, but you can’t argue with the talents of the G06 xDrive30d variant… Words: Shane O’ Donoghue. Photography: BMW AG.

It would appear that it’s almost impossible to start a review of the BMW X6 without first addressing its divisive image. I say divisive as I don’t know many people that love the look of the new ‘G06’ X6 – or that of the first two generations of BMW’s big ‘Sports Activity Coupe’ for that matter – and yet, BMW has sold hundreds of thousands of them. And, if the sales fi gures don’t convince you that the X6 is manufactured for sound business reasons, all you have to do is take a look at BMW’s rivals’ line-ups; all of Audi, Mercedes and Porsche have effectively copied the BMW X6 template of the large SUV with a dollop of coupé styling.

BMW further emphasised the latter for the third iteration tested here, lengthening the X6, widening it and also lowering the roof. Apparently, it’s available in Sport specification, but if BMW sells one of those on our shores, I’d be surprised, so, in reality, the most sought after version is likely to be the one we’re testing here, the X6 xDrive30d M Sport G06. In fairness, if you’re sold on the boisterous image of the X6, you’re likely to approve of the M Sport embellishments and the massive 21-inch rims that come as standard on this model. Some of you may even approve of the new illuminated kidney grille option – called Iconic Glow by BMW. It only works when the car is opened and closed at a standstill, but I wager someone somewhere will find a software way around that to ensure it stays on while driving…

No matter what you think of the exterior of the new X6 (personally, I get why some will love the aggressive front end, but the rear end is very fussy in its styling), the interior is more or less straight out of the BMW X5 G05, with a tad less rear headroom and no option for a third row of seating. Saying all that, the X6 still feels huge inside. You climb up into the driver’s chair and the rear seats are capacious and comfortable, too. The latest digital BMW dashboard technology is present and correct, which is mostly a very good thing. It’s a quick-reacting system that looks great and has multiple layers of functionality that only an owner will ever truly get to grips with. We wish the instruments themselves were more customisable, but the design counters with lovely integration of the sat-nav maps and the rather good voice-activation.

As standard, the X6’s interior materials are of exceedingly high quality, though of course buyers can upgrade everything. I could do without the glass-like gear lever and it’s a shame the buttons on the centre console are uniformly flat in feel, as you can’t select them easily without taking your eyes from the road. It’s a complaint we have with all of the latest generation BMWs, though, not unique to the X6. This car does get exceptionally good seats and a wide range of adjustment of the driving position, which is always welcome.

Nobody needs a big SUV that looks a bit like a coupé. Likewise, nobody needs a big SUV that, well, can handle like a coupé. Ok, the G06 X6 still feels like an SUV from behind the wheel, but its ability when pushed goes way beyond what any buyer could reasonably expect. At low speeds, the evergreen 3.0-litre straight-six diesel feels omnipresent in terms of its instant torque delivery, and yet it still likes to rev, giving the X6 driver huge flexibility to draw on. It’s so good that it’s all too easy to ignore how remarkable the eight-speed automatic gearbox bolted to it is. You’ll not need the gearchange paddles behind the chunky M Sport steering wheel.

As standard, the X6 gets air suspension and adaptive damping, allowing the driver to pick and choose the best setting for the road conditions and/or their mood. Having played around with the settings over a variety of surfaces, we reckon it’s best left in the Comfort mode, as the body control is still mighty, with little in the way of unwanted body lean or dipping under heavy braking. Yet, despite the 21-inch wheels and low-profile tyres, the X6’s suspension soaks up and isolates passengers from imperfections in the road underneath. Sure, body control is better again in the Sport settings, but it’s noticeably more uncomfortable and not worth the compromise. Perhaps on a glass-smooth road you’d consider such a thing.

At the end of the day, there’s no doubt that the X6 lives up to its BMW billing when driven as its image suggests it will be. Regardless of how divisive that is.