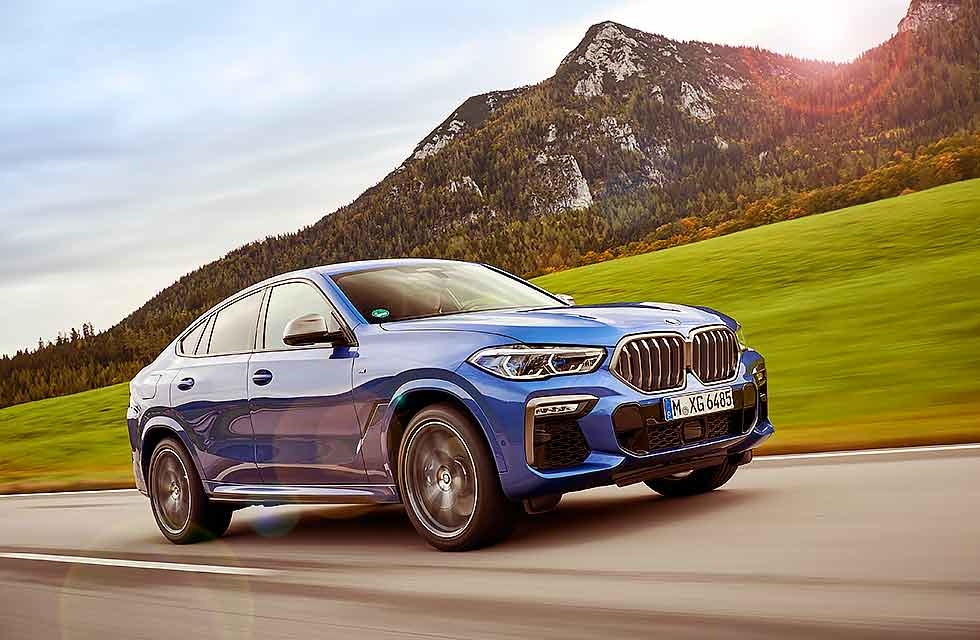 Starting a coupé-SUV trend and wearing an M Performance badge, how does the third-gen BMW X6 stack up as the 530hp M50i? Words: Matt Robinson. Photography: BMW AG.

Say what you like about the BMW X6’s appearance, but it cannot be denied that is has been a trend-setter. Since it first appeared in 2008 as the E71, across two generations (the F16 followed in 2015) BMW has shifted more than 443,000 units of its biggest coupé-SUV across the planet. And it has spawned many imitators from rivals in the intervening period, even if it took a while for other manufacturers to cotton on to the extensive profits to be made from these niche 4x4s.

Whether you’re looking upon this G06 example, then, and either retching or swooning makes no difference to the powers that be in Munich. The X6 has since begat X4 and X2, and so a third generation of the divisive yet cash-generating big SUV – which shares much with the fourth-gen G05 X5 – was an inevitability. We are going to leave the exterior styling of the X6 well alone in this review, as you have eyes and can make your own opinions; let’s instead move straight inside and assess the X6’s cabin.

The problem with these coupé-SUVs, which have a normal ‘wagon’ analogue sitting alongside them in the showrooms, is that they tend to lose much in the way of practicality in the name of their rakish rooflines, while simultaneously charging more cash for the privilege of owning them than the very vehicle they’re based on. And the X6 Mk3 is no exception to the latter rule, as it’s £2,700 more than the equivalent X5. However, a wheelbase stretch of 42mm over the F16 predecessor has blessed rear-seat passengers with more legroom, while heavy scalloping of the headlining over the back pew does mean that six-footers should be able to sit there in relative comfort. There’s a centre belt in the back as well, so it’s a full five-seater, and even the X6’s boot is only 70-litres down on the X5’s, although that’s with all seats in place – there’s a much larger 345-litre gap between the two large BMW SUVs if you fold the rear row of chairs away.

Up front, the ambience is suitably plush. Admittedly, if you’ve sat in almost any G-development-code BMW, the layout of the X6’s fascia will be comfortingly familiar to you, but that’s not to say this is a sub-par interior by any stretch of the imagination. The quality of the materials used is first rate, there is some contour-enhancing ambient lighting incorporated into various bits of trim, the digital instrument cluster is present and correct and the BMW Operating System 7.0 infotainment is still amongst the best in the business – as is the iDrive rotary controller, which continues despite the advent of things like touchscreens, voice commands and even gesture control. Sometimes, you can’t beat good ‘oldfashioned’ ergonomics, eh?

With more of the engines from the G05 X5 range due to come on stream in the X6 in the near future, for the moment there’s a threestrong line-up from launch. Choose from Sport or M Sport trim, and there’s the xDrive30d turbodiesel or xDrive40i straight-six petrol engines. But, until the full-fat X6 M arrives well into 2020, for now the most potent X6 is this one: it’s the M Performance derivative, badged M50i and packing the 4.4-litre biturbo V8 from the M850i. Power goes to all four corners via xDrive and an eight-speed Steptronic Sport automatic.

Even in 2,310kg of prime SUV beef, that drivetrain serves up some ferocious punch. The X6 M50i snorts to 62mph from rest in 4.3 seconds, which is remarkably a tenth quicker than the M340i that’s fully 565kg lighter. And the X6 feels monstrously quick, too, the pick-up from anywhere on the rev counter being truly astonishing. Better still is the noise, as this is a V8 that has not been muted by the fi tment of a couple of blowers.

The cultured, rich notes it emits at low revs and into the mid-range give way to a slightly harder-edged, raspy tone as the needle swings around to the redline. Yet it’s the fact that it remains velvet-smooth from idle to rev limiter that impresses, almost as much as the way its torque and horsepower curves neatly dovetail with each other to ensure there’s no let-up in the acceleration – on its native Autobahns, the X6 M50i is relentless.

The handling doesn’t let the straight-line shove down, though, because all X6s will have Dynamic Damping Control and self-levelling twin-axle air suspension, and this little combo performs wonders at controlling the bulk of the BMW’s body when it’s on a charge. Buyers can further choose to opt for active anti-roll stabilisation, an electronically controlled differential lock and Integral Active Steering (four-wheel steering), which only further enhance the agility and road-holding of the SUV. Not that you’ll necessarily need these things; with all the traction advantages of xDrive, plus the M Performance model’s whopping Pirelli 275/40 R21 front and 315/35 R21 rear tyres providing all the grip in the world, the M50i can feel like a car that is smaller than it actually is when you’re on the right roads.

This is because the steering is well weighted and accurate, albeit not over-endowed with feel, while the brakes are pretty mighty. Sure, there are occasions where the X6’s mass never truly goes away, but in the main it’s a compelling experience to hurl the M50i at a series of bends and enjoy, with some stupefaction, the capable manner it deals with them with little in way of histrionics.

Of course, even though this is an M Performance vehicle with comfortably in excess of 500 horsepower, there are few places on the UK road network where it can be driven hard for prolonged periods of time. And no one is buying the X6 M50i G06 because they want a sporty drive first and foremost, because if they were then the lower, lighter M850i with the same motor is a far more rewarding proposition. Where the X6 has to earn its spurs, then, is as an SUV – to whit, can it cruise comfortably and quietly? Is it easy to operate and see out of? Does it feel like a behemoth in city traffic?

Naturally, as this is BMW we’re talking about, the balancing act has been pulled off with some aplomb. While the X6’s 21s do occasionally thump and thud into potholes and the like, the suspension manages to level out the worst of what the road surface can throw at the SUV, filtering away the low-frequency ripples and minor bobbling that can often mar high-performance machines with huge wheels and rubber-band tyre profiles. Similarly, the slippery shape of the X6 contributes to a minimal amount of wind noise, while those aforementioned Pirellis don’t introduce too much chatter into the passenger compartment, even on rougher asphalt.

Overall, it’s as polished, as cohesive and as impressive an all-round showing as you could expect from a modern BMW M Performance model. You can argue that this monumental drivetrain is better employed elsewhere in the Munich company’s portfolio, or that the looks of the X6 are bound to continue to spark debate for years to come, but the summation has to be: this X6 is a market-niche pioneer, resolved into its finest package yet as this Mk3 M50i.