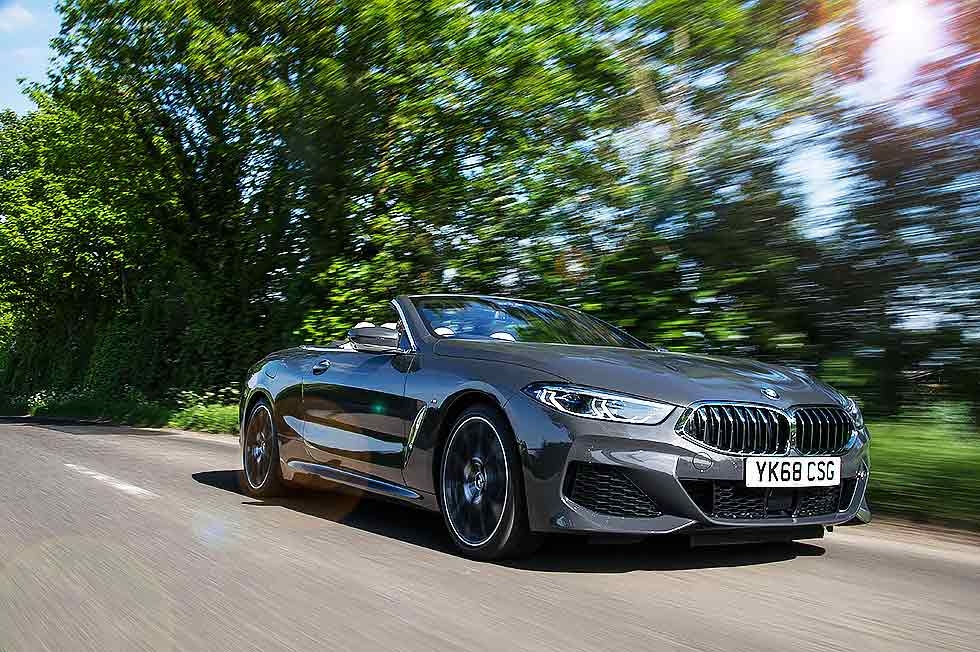 The BMW 8 Series Convertible is one of the most incongruous cars in the whole line-up. It weighs more and is less structurally stiff than its Coupé sibling; it costs more to buy and is incredibly space-inefficient; and yet, it takes no time at all in its company for a mere mortal to be completely besotted. The seduction starts with the slinky lines of the 8 Series, featuring a sharply penned and exceedingly attractive nose that offers welcome relief at a time when BMW is determined to court controversy with its new radiator grille designs. The muscular rear end of the 8 Series leaves onlookers in no doubt that this is a serious machine and, while the 8 Series Coupé is itself a gorgeous looking thing, with the roof down, the 8 Series Convertible’s brawny shoulders somehow lend the otherwise distinctly sporty appearance an extra elegance. If this were a social media post, commenters would already be flaunting the ‘TAKE MY MONEY!’ meme.

Pull open a door and the impressiveness continues. M Sport is the minimum trim level for the 8 Series in the UK, so the Convertible comes with a sporty, if restrained, specification inside. Stay standard and it’s all mostly monotone with the occasional splash of M tricolour stripe, though I suspect many buyers will be tempted to pair a muted exterior hue with a bright contrasting leather colour. The 8 Series cabin carries either off with aplomb. Regardless of the colour scheme you opt for, the interior feels of very high quality and, as we’ve documented plenty of times in these pages, the latest iDrive infotainment system is top notch. The 8 Series Convertible doesn’t get gesture control (as the camera for it is mounted in the roof of other cars), but the two large screens are present and correct, allowing operation via touch on the centre display, by using the excellent rotary control in the middle of the car or even voice recognition. With familiarisation, I’m finding the latter system better and better to use, reducing the need to take your eyes off the road for items that may be a few menus down the hierarchy.

Naturally, only the front seat accommodation is of utmost importance in the 8 Series Convertible. Car buyers that regularly use the rear seats of their vehicle wouldn’t even consider such a purchase. For the record, the two back seats are very uncomfortable, with less shoulder room and more upright back rests than in the 8 Series Coupe, coupled with laughably little legroom. Think of it as extra luggage space. Especially as the (required) wind deflector covers over the back seats when in place. It is possible to accommodate longer items in the boot by folding down the rear backrests, while the boot itself holds 350- litres (only 70-litres less than in the Coupé). Annoyingly in a car this expensive, it’s very easy to forget to manually move the luggage space divider in the boot, and then discover your error when you try to put the roof down.

If you do remember to do that, then dropping the roof is a satisfying experience. You can hold a button down on the (still oversized) ‘Display Key’ from outside the car for maximum pose value, or do it while sat inside at speeds of up to about 31mph. The operation itself is exceedingly slick and quiet and it takes a mere 15-seconds. When in place, the roof is snug and, if not quite as isolated from the outside world as the Coupé is, it manages to keep wind roar at bay to a decent level, even at speed on the motorway. Which brings us to your choice of motive power. Now, money no object, you’d have the M8 Convertible or the only-slightly-less-unnecessary M850i, while those that want to stick with petrol power at a more reasonable price point have the option of the rear-drive 840i Convertible. Sitting in the middle of them all is the car tested here, the 840d xDrive Convertible. And it’s astoundingly good. The big-hearted twin-turbo six may be a little noisier at idle than its petrol-powered siblings, but it never needs more than 2500rpm on the rev counter to deliver stonking performance. That’s thanks to its 501lb ft torque output at low revs. It really does give the xDrive four-wheel- drive system something to think about.

Saying that, left in its default settings, the all-wheel drive computer control nonchalantly divvies up the torque to the wheels it deems are up to the job, in the process propelling the big convertible forward at eye-opening pace. The 0-62mph time of 5.2-seconds is a decent result, but it doesn’t prepare you for how this car can gather pace when already travelling at quite high speed. Toggle into the Sport Plus driving mode and the 840d takes on an even more demonic personality, creating a suspiciously sporty new sound from the exhaust, holding gears for longer than is strictly necessary with this engine and even automatically blipping the throttle gratuitously and down-changing every time you brush the (excellent) brakes. To be honest, none of this is really in keeping with the natural character of the 8 Series Convertible, but it does reveal BMW’s engineering expertise and focus on driving dynamics are never far away.

Throughout all this, the chassis excels. It’s a wide car for B-road blasting, but the standard Integral Active Steering (standard on all 8 Series cars with xDrive), which steers the rear wheels, means the 8 Series feels uncannily agile in tight turns (and when parking, actually), without sacrificing high-speed stability. The suspension itself can be firm over bad surfaces and transverse ridges, but body control is exceptional.

All this can be said of any member of the 8 Series Convertible family, but the 840d’s USP is the ability to travel long distances without filling-up, as it’s capable of 40mpg if you’re cruising along. And while the cost of filling up might not overly bother those with some eighty grand to drop on a car, the annoyance of stopping often to do so might. Perhaps this isn’t the most incongruous BMW after all…

The rear seats are virtually useless, but that will concern few…