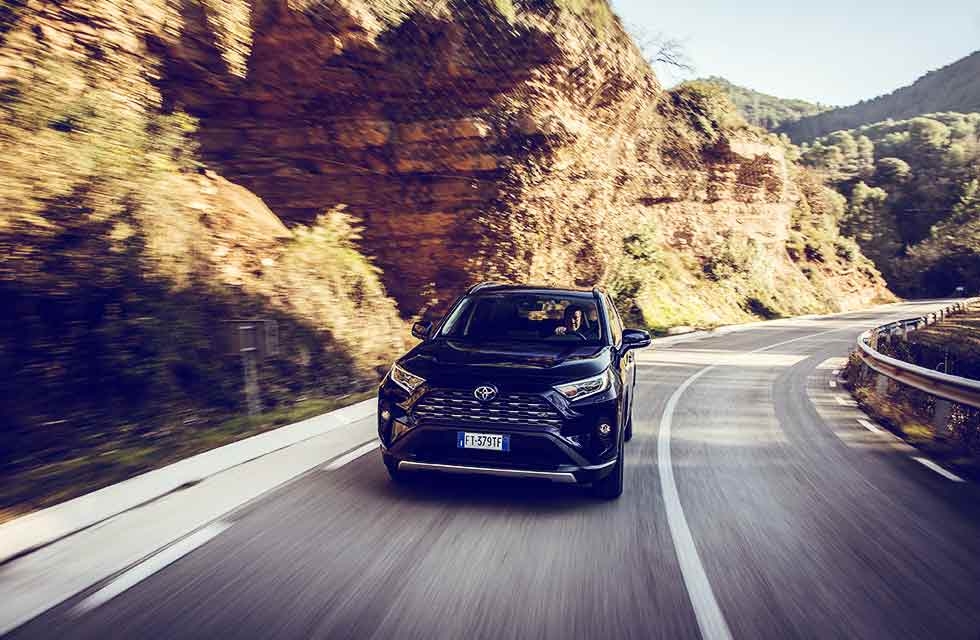 The great underachiever It’s now 25 years since the RAV4 made its debut, but Toyota’s compact SUV still misses its target. By James Dennison.

The latest Toyota RAV4 sits on an all-new platform and comes with a slew of standard safety kit, a clever new off-road mode and enough visual clout to stand out among the Russian-doll styling of rivals. Yet the headline for UK buyers isn’t what it has got, rather what it hasn’t. Namely, any form of conventional petrol or diesel engine.

Bold stuff – especially since the RAV4 is the only car in its class with a purely petrol-hybrid powertrain offering. Toyota defends the decision, pointing to the fact that 91 per cent of the previous model’s customers opted for the hybrid version in 2018.

Admirably forward thinking, or it would be if the hybrid powertrain married its impressive figures to a bit more of the polish and pleasure you get from the best petrol or diesel engines. Using a 2.5-litre four-cylinder petrol engine and two electric motors, the RAV4 develops a combined output of 219bhp, delivered through a CVT transmission and all-wheel drive (front-wheel-drive versions have one electric motor and slightly less power).

That’s not a massive output, but the other side of the coin is its combination of low claimed average fuel economy (up to 51mpg) and CO2 emissions (as little as 102g/km) – both of which compare favourably to petrol-only rivals.

The sprint to 62mph takes a respectable 8.1 seconds (8.4 for the front-wheel-drive version), but the delivery lets the side down. The electric motors do their best to provide torque at the bottom end, but any meaningful increase in speed is met with flared revs and an overwhelming din from under the bonnet.

It is possible to drive around this characteristic if you really concentrate, but there’s just not the same flexibility as you’d get from a decent turbocharged petrol or diesel engine. This is a pity, as the rest of the driving experience feels very nicely judged, with decent lateral body control through corners and a comfortable all-round ride.

It won’t titillate the senses through sheer driving pleasure, but that’s never what the RAV4 has been about. The cabin is as spacious and solidly built as any of its rivals – cars such as the Ford Kuga and Honda CR-V – with enough room for five average-sized adults and their luggage. Yet the bravery of design like that seen on Toyota’s own C-HR is missing.

The origami-esque exterior styling is reasonably bold and appealing, but the drab festival of grey you see on the inside is not – and that’s not to mention the Toyota infotainment system being as clunky and hard to use as ever.

Happily, such gripes with the on-board tech don’t apply throughout the rest of the car. Excellent standard-kit levels are provided on even the base Icon trim, including keyless ignition, a reversing camera and the latest incarnation of Toyota Safety Sense with improved pedestrian detection in low-light conditions.

All of this adds up to make a car that should – and on paper is – a worthy alternative to regular diesel and petrol rivals. It’s a shame, then, that the unpolished powertrain and disappointing infotainment system spoil the show.

Mk4 RAV4 starts at just under £30k; it’s a hybrid-only line-up for the UK. New platform is lighter and stronger; new body stiffer and more stylish.

VERDICT Lags behind the class leaders