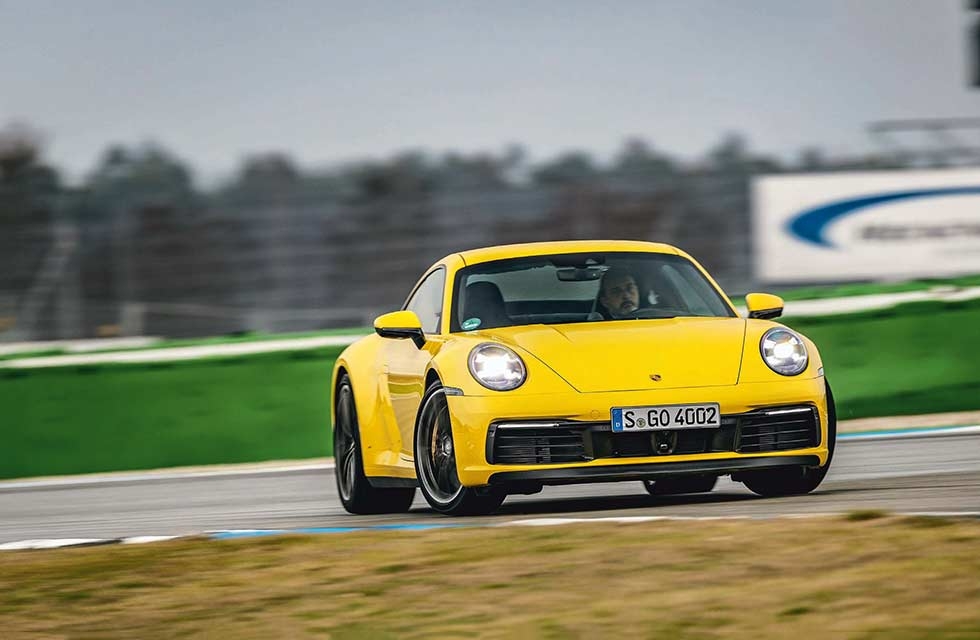 Enthusiasts anticipate the arrival of each new generation of the 911 with some trepidation. Evolution is inevitable, but its fruits are not always welcomed. Every new 911 is a better car, but there’s often debate around whether it’s a better 911. This is because with each generation, the essential 911 character gets diluted, by the handling being safer and by improved refinement and ever-stricter regulations muting the flat-six. Usually. Seems like the 992 is different…

It certainly looks different, and the all-new body is much more aluminium intensive. All exterior panels are now aluminium and there is no narrow-body 992; it’s one size fits all. The wider-hipped rear is mated to a new, widertrack front (+45mm) and also in the mix for the first time are different-size front and rear wheels (20-inch front, 21-inch rear), all of which has the potential to change the 911’s dynamic character. Our first drive is at the Hockenheim circuit so we’ll be able to fully explore the car’s dynamics, and with the Carrera S and 4S both here in otherwise identical specs we’ll also get the chance to discern the differences between the rear- and four-wheel-drive 992.

This is the first time I’ve seen the 992 in the metal, and while I was expecting a chunkier car I wasn’t expecting the sharpness. There’s a crispness of swage and shut line that along with the extended nose gives the new model unexpected definition. The high-mounted, Taycan-style light treatment works too; it’s different, but following the 992 from a distance there’s no doubt it’s a 911, just a more modern one. Put me down as a fan.

The interior is even more radically overhauled. The broad sweeps of the architecture are familiar but everything in here is new. Expect German switchgear manufacturers to report a drop in output, because the ranks of buttons that lined the 991’s centre console have gone, replaced by smooth, blank trim. Key off, significant areas of the 992’s facia are also blank, the central, analogue rev counter being flanked by two 7-inch TFT screens that can create the traditional array of dials, while the centre of the facia is dominated by a 10.9-inch touchscreen. Many functions are delegated to soft keys on this screen, though there are some hard-key duplicates, for traction control and dampers, for instance. Old habits… Most switchgear is of the toggle variety, and knurled finishes are a recurring theme, the most prominent example being the stubby gear selector for the new eight-speed PDK ’box, which is no longer an active shifter – only the wheel paddles will override the auto now. An overhauled seven-speed manual gearbox will also be offered.

Also gone is the model-shaped key which fitted like a loose tooth in the ignition slot. The 992 is keyless, though there’s a twist switch rather than a start/stop button. Give it a turn and the flat-six starts and idles with a familiar guttural note. Both 992s here have the optional sports exhaust, denoted by large oval tailpipes, but it’s good to know that the character most of us want in a 911 is available despite the fitment of gasoline particulate filters. These make a car cleaner but also reduce power and rob the engine note of its high tones.

We aren’t allowed to drive on public roads, and while a track can tell you a lot, it won’t reveal the subtleties and nuances of ride and refinement. So to get a feel for the 992 I make a couple of tours of Hockenheim’s perimeter roads. As ever, the seats are both comfortable and – as will be proved shortly – brilliantly supportive, the view out good if subtly different from the 991, the headlamp-capped wing bulges less clearly defining the 911’s front corners.

One of the first things that strikes you is that Porsche’s engineers have nailed the steering, which wasn’t the case with the early 991, the first 911 with electrically power-assisted steering. The steering of this 992 is initially light (as you’d expect of a car fitted with optional Power Steering Plus) but manages to be connected and responsive on centre, and direct yet calm with regular inputs. Demand more response and the car snaps to attention, changing tack briskly with no pause for slack to be taken up. The steering ratio has increased over the 991’s by 11 per cent – or six per cent on cars such as this fitted with optional rear-steer – but it’s the feelsome connection as much as the directness that impresses. The low-speed ride is well resolved, too. You’re aware of bumps and imperfections but it all remains quite smooth, and while there’s a little low-frequency bump-thump reported, it’s not intrusive or distracting. The active dampers have been completely revised for the 992, offering a more compliant softest setting and faster response to changing inputs, says Porsche.

Squeeze the throttle and the engine picks up keenly and very rapidly adds boost, a faint turbo whistle audible. The 992 flat-six shares its basic dimensions and peak output of 444bhp with the 991 GTS but is substantially different, having new, bigger turbos, more finely controllable piezo injectors, a new, asymmetric inlet valve strategy and more efficient intercooling – and those are just the headline changes. It’s been many years since the 911 flat-six was something to look at, but I think it’s a shame that when you pull the 992’s engine cover release only the grille at the base of the rear screen pops open, revealing merely a panel with a couple of extractor fans and a cluster of fillers, like a Boxster.

Out on track in the C4S a few things soon become apparent, the first being that the 992 is very rapid. The second is that even in Normal mode full-throttle upshifts are astonishingly fast and utterly seamless. Compared with the outgoing seven-speed PDK, first gear is shorter and top gear longer, helping both acceleration and economy. So although it weighs more than the old car, the 992 is exactly as quick off the mark as the 991 GTS, taking 3.7sec to get to 100kmph in rear-drive PDK guise, or 3.6sec with four-wheel drive. You can lop another 0.2sec off those time if Sport Chrono is optioned, as it is on these cars. As well as a stopwatch, this pack adds the steering wheel-mounted mode selector button/wheel and dynamic engine mounts. It’s also worth noting that both these 992s have the PASM Sport chassis with the 10mm suspension drop. So, they are well-equipped, chassis-wise.

Around the lap, you simply don’t think about the steering weight and rate, meaning they’re pretty much spot-on, and you can rely on the brakes to deliver, too. The reason is probably not that they’re optional PCCBs and among the very best carbon-ceramics I’ve tried, with perfect feel and power, no slack and great progression, but because of the new brake pedal. It’s made from steel, plastic and carbonfibre and is lighter but crucially stiffer and thus gives greater feel and allows finer modulation.

The lateral grip the 4S generates is amazing, even though the temperature is only now on the edge of what suits the summer Pirelli P Zeros. I’ve been piling into the near-180-degree Sachs Curve ever faster and the car feels so poised, so planted. There’s a tangible increase in focus and urgency as you head up the modes to Sport and Sport Plus, and with stability off, when you do finally exceed the limit the rear slips gently wide under power. Hold your nerve and the throttle and the front will pull the car straight close to the corner exit.

Traditional 911 traits only emerge when you’re right at the limit, the rear getting mobile as you brake and turn, for instance, and even then the 992 stays composed and exploitable. The two-and four-wheel-drive versions feel very similar – I suspect it will be hard to tell them apart on the road. On track, the rear-drive Carrera feels a little punchier (at 1515kg it’s about 50kg lighter) and if you find it hard to resist provoking a bit of second- or third-gear oversteer then it’s the better car, being easier to balance and hold on the throttle; as soon as you start modulating the throttle in the 4S it sends drive to the front, snuffing out the slide.

As you’ll have gathered, the 992 isn’t so much a revised 991 as an all-new 911. There is much that is very good, not least the steering, the PDK ’box, and the poise, balance and grip of the new chassis. The performance isn’t too shabby, either. Less impressive stuff? The pop-out door handles seem an unnecessary complication, there’s a lot of black plastic below the bumper line at both ends, and the 3D letters spelling ‘Porsche’ on the rump look like a cost and weight saving waiting to happen. But these are mere details. Yes, we still need to drive it extensively on the road to be absolutely sure, but all the signs are that the 992 is both a better car and a better 911 than the 991. Evolution, eh?

Top: Cabin has been thoroughly reworked, with fewer buttons and a 10.9-inch infotainment touchscreen. Left: Steering wheel dial – part of the optional Sport Chrono package – allows quick switching between driver modes (above). Below left: Rev counter is still analogue, but the dials either side are now digital

Porsche’s engineers have nailed the steering, which wasn’t the case with the early 991

It looks different, sharper, but there’s no doubting it’s a 911, just a more modern one

If you find it hard to resist provoking a bit of oversteer, the rear-drive Carrera is the better car

+ More of the same, only better

– We’ve yet to drive one on the road