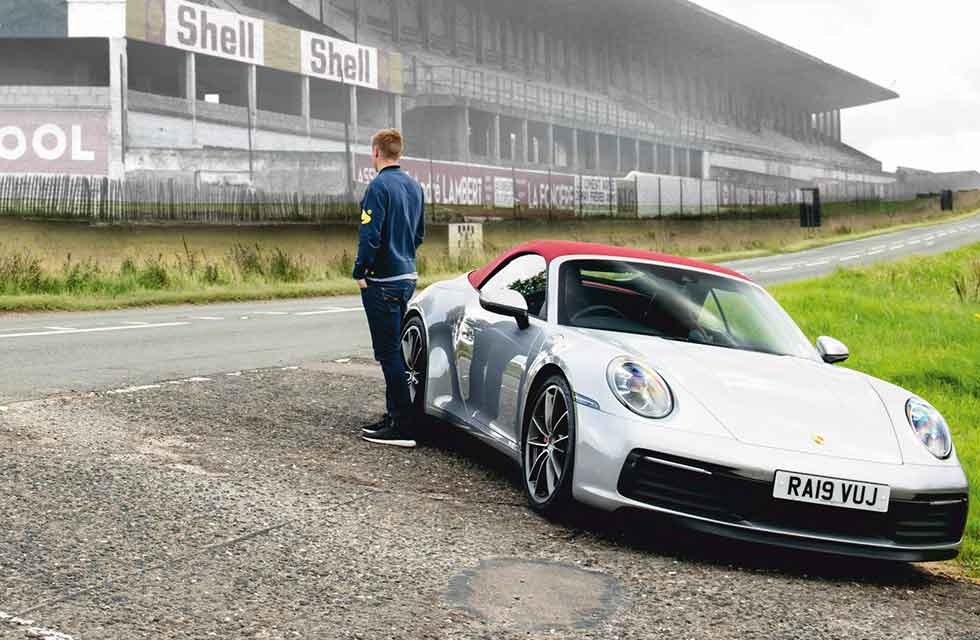 If history had played out differently, the UK mainland would have its own endurance road race. Drive-My heads to Derbyshire to drive what might have been Britain’s answer to Le Mans. Written by Lee Sibley Photography by Ali Cusick.

Le Mans. Not only is it the most famous endurance race, but surely a prime candidate for the most alluring road circuit on the planet. Comparable to what the TT is to bikers, Le Mans is simply the highlight of the motor-racing season. Winning it is considered the peak of any driver’s career; just being there to witness the action is enough for spectators young and old.

“Richard Attwood screaming past in 917 chassis 023… the thunderous rumble of Jacky Ickx flying along in 956 chassis 002. It could have happened here! What might have been…”

For us Brits the middle weekend of June is all about that pilgrimage down to La Sarthe, where we’ll watch racing versions of our own 911 sports cars take on contemporary rivals. Yet if history had played out differently, we might not have had to go anywhere at all to watch a world-renowned endurance road race. These days the Peak District National Park is known for its limestone valleys and enveloping moorland, but in the 1950s serious moves were made by local authorities to configure a 12-mile circuit on roads near Buxton, Derbyshire, which would rival – no, usurp – that famous French spectacular.

Simon Taylor tells an excellent story in Motor Sport magazine’s May 2012 issue about how an amendment to a new Road Traffic Bill was proposed in 1955 to allow for public roads to be closed on certain days per year for the purpose of a motor-racing event. This would have given a green light for what we’ll call the Parsley Hay loop – named after a quiet village the circuit was set to circumvent. The concept was tantalising: promising Le Mans speeds amid a TTesque landscape, this really did have potential to be the world’s ultimate road race.

Alas, the Bill was never passed. Unfortunate tragedies occurred in quick succession at Le Mans and then Dundrod, a fast road circuit just over the water in Northern Ireland which, like Le Mans, is still in existence to this day, hosting the notorious Ulster motorcycle GP. Ministers got cold feet, and the idea was thrown out almost as quickly as it was conceived. Not a brick had been laid on a grandstand, not a line of paint etched onto any tarmac.

You can drive pretty much the entire ‘circuit’ today, and it’s for this reason I find myself soaking up the autumn sun from the confines of a 2019 Carrera S Cabriolet, its roof stowed. The rag-top 992 is a deliberate choice, mimicking the open-cockpit nature of race cars of the time which would have taken to Parsley Hay, had an event come to fruition.

My mission is a fact-finding one to assess what might have been had this ‘British Le Mans’ road race taken off. Unlike our usual sojourns in this magazine, this trip will be rather archeological in nature, digging beneath the surface and using more than a thread of imagination to make this one come alive. If you’re up for it, we’ll crack on.

A five-hour slog up from the south coast finally brings us to the A515 between Newhaven and Hurdlow. A long, arrow-straight stretch of road rides down a dip before climbing up and over the horizon a good couple of miles ahead. There’s green farmland all around, a couple of trees and an old shed in a field to my left. Other than that there’s simply nothing here – at face value at least.

This lengthy patch of tarmac would have been the home straight. Curtailed today by a 50mph limit – with plenty of signage to remind us so – it’s not hard nevertheless to compare it to La Sarthe’s Mulsanne straight and the heady speeds sports cars in competition might be able to amass along it. The middle section of the stretch, where the land falls into a dip, was to be the start/finish line, where circuit organisers would have erected grandstands akin to those still standing today at another famous old road circuit, Reims-Gueux.

I pull over, kill the 992 and hop outside. Traffic periodically hurtles past in both directions, but I try to shut all that out. Instead, gazing up and down the road, I imagine what this place could have been like. I begin to see Richard Attwood screaming past in 917 chassis 023, or the thunderous rumble of Jacky Ickx flying along in 956 chassis 002. It could have happened here! What might have been…

A drop of rainwater on my head brings me back to reality. Dark grey clouds have gathered above, threatening a quick shower. I dive back into the 992 and continue my journey, a pull and hold of a toggle in the centre console calling the roof mechanism into action as the canvas top glides quietly back over my head and latches onto the frame of the windscreen. Like in the 991, speed in the 992 Cabriolet is limited to 30mph while this takes place, but it’s no hardship as I sit behind a slow-moving campervan struggling against the road’s uphill gradient after the dip. 12 seconds later, the Cabriolet assuming a Coupe silhouette once more, I drop a couple of cogs and blast quickly out and around the slower moving traffic, the flat six’s two turbochargers giving me the instant boost required to complete a speedy but safe manoeuvre in search of a clear road ahead.

Soon we turn right, off the long stretch of busy road and onto a much quieter slither of tarmac, Tagg Lane, cutting through the Derbyshire countryside down towards Monyash. Away from the main road, I squeeze the accelerator in second gear and the Cabriolet launches forward with frankly audacious pace. Third and then fourth ratios are called upon in succession, all with a flick of the right wheel-mounted PDK paddle, before I short shift into fifth and bring the 992’s speed back into line.

The ground becomes much more uneven along here, which would usually incite that famous ‘nose bob’ from older 911s, but there’s none of that with the 992. Its nose stays glued to the floor, the steering never going light, the ride staying brilliantly polished all the while. How can a Cabriolet with Sport chassis ride with such conviction?

The road rolls down into a quick right-left S-bend. A snappy change down to third on the paddles, a dab of the brake pedal then a measured turn-in and hold of the throttle sees the 992 corner beautifully, its nose damn near flat. Holding the revs at three grand, I flick the wheel from two o’clock to nine o’clock for turn two, easing back to dead ahead as the car rounds the corner, my right foot squeezing the power back in once more and… whoosh! The Cabriolet is horizon chasing again, the level of its cornering abilities certified ridiculous.

Hard on the brakes to meet a 30mph limit, we enter the village of Monyash, but the reality is this quiet little village would have been cut out of the mooted circuit layout. That aforementioned right-left would have just been a right, cutting across the dip of a meadow to rejoin the main route out from Monyash’s easterly side. The road bends this way and that up out of Monyash on what would have been a flowing, fast section of this ‘circuit that never was’. It’s well sighted and very quiet, so today I’m staying loyal to the racing line, forging a straight line ahead as the road falters slightly left and then right, the 992’s big wheels kissing the tarmac’s edge as it does so.

A fast S-bend approaches, a wonderful bit of camber to its surface allowing for only minimal lift through it. We’re now only 400 or so yards from intersecting the main straight, where those grandstands should be, but the loop isn’t over yet. Instead I’m forced to get hard on the 992’s ‘Big Red’ brakes for a sharp left turn, enough to get the nose really tucking in in classic 911 fashion. I follow the road over a rise and through another meadow, past a little stone bridge before another right turn, where the open scenery is swapped for leafier surroundings. There are grass banks either side, and the road surface is noticeably more slippery thanks to the presence of rotting leaves scattered en-masse.

Forming the back end of Parsley’s circuit, it’s much narrower here too, bringing the 992’s sheer size under scrutiny. It’s just so damn huge! On dainty British B-roads such as here, placing the 992 with any real authority becomes an issue. A modern car such as this really isn’t designed for 80-year-old countryside cut-throughs.

Another sharp right turn and we’re on a smoother and wider thoroughfare with waist-high stone walls set slightly back. It soon becomes enclosed by a small wood, dipping down and then back up through a real sweeper of a right bend, the camber once again working in our favour. This sector is probably my favourite of the circuit, the proximity of trees either side adding to the intensity of the drive. Through a quiet hamlet, we shoot under a little bridge before what would be a lovely double right-hander to take us back onto the main straight. Today though, it’s a T-junction with a garage forecourt on the inside corner – a modern-day pitstop, perhaps?

Back on the A515, my first lap is complete, a subsequent couple of laps broken up for Ali to bag his photography. It’s evidential there’s absolutely no reference anywhere in the locale as to the history of these roads around us. And why would there be? The reality is, nothing happened. Aware we’re the only party fully aware of the alternative history of our surroundings, we indulge in sewing together another half-dozen loops around Parsley Hay, some taken at a more steadier pace than others.

In all we complete nine laps, interrupted only by the illumination of a fuel light, which prompts us to look at our watches. The car needs to be back by the evening, and darkness will soon be drawing in… With that I point the 992 southbound on the A515 for the first time, headed for Porsche GB’s HQ down in Berkshire. It’s been a fascinating day looking at the world through my own interpretation of ‘virtual reality’, overlapping the topography of today with feasible invention of what this place could look like.

Parsley Hay would have had everything: pace, danger and excitement, the latter perhaps a product of the former two. But would England’s effort have diluted the appeal of road racing? Such meanderings at this point are immaterial. Some things just aren’t meant to be… it looks like Le Mans will have to suffice!

BELOW The 992’s active rear wing is called into action. These roads might have once seen the 2.8 RSR’s ducktail had the Parsley Hay loop been built.

BELOW 12 miles of sweeping, open roads with narrow, leafy sections: the Parsley Hay loop would have had it all.