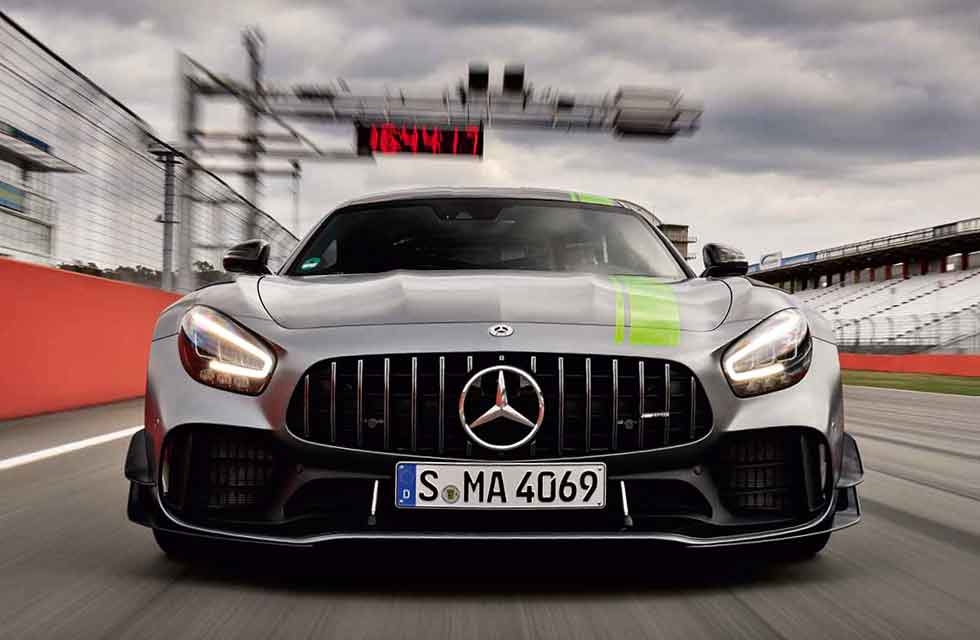 The Mercedes-AMG GT R already has a flair for the theatrical, so can this track-focused Pro version bring even more to the table? Words by Adam Towler. Photography by Aston Parrott.

Even with the desensitizing effects of an open-face helmet, the GT R Pro’s familiar and rumbustious hot-V V8 has a throb that works its way right through my body, as if the silencer boxes are nestled right up against my chest. Dry-sumped and mounted well aft in the car’s front half, the motor is indeed not far away, and sitting as I am so close to the rear axle, much of the exhaust system is probably in close proximity too. With 577bhp the Pro is no more powerful than the ‘regular’ GT R and has less power than the majority of the current supercar elite, but you’d never know it from the bellowing racket it makes – or care, for that matter, given the way it swallows Hockenheim’s expansive asphalt whole.

What is the Pro? Think of it as a small step towards the AMG GT4 race car, or the RS to the regular 911 GT3 991.2 if you like to think in Porsche parlance. Using the already formidable GT R as a base, it adds a range of dynamic and weight- saving measures that, we’re told, knock around six seconds from the GT R’s Nurburgring Nordschleife lap time. AMG is quick to point out that the Pro’s time of 7min 4sec was set in ‘autumnal’ conditions, but even so, that’s still ludicrously rapid.

The centrepiece of the Pro’s dazzling spec is a set of manually adjustable coilovers, offering separate settings for pre-load, rebound and compression, the last of those further split for low- and high-speed movements. So there’s no longer a little damper button on the centre console: you have to get down on your hands and knees to make any tweaks. There’s also a carbonfibre adjustable anti-roll bar on the front axle now, with a steel counterpart on the rear, so altogether there should be plenty of scope for fine-tuning the Pro’s handling to individual tastes and styles. Meanwhile the GT R’s uniball spherical joints on the lower rear wishbones are here joined by the same on the upper wishbones too. A carbon shear panel underneath the car towards the rear adds greater rigidity to the structure, while the GT R’s dynamic engine and transmission mounts have been retuned to suit this more aggressive package.

In Europe, all Pros receive the AMG Track Package and carbon-ceramic brakes as standard (both are options on the regular GT R), the former bringing some cabin scaffolding, four-point harnesses and a Are extinguisher. The forged wheels are finished in titanium grey, while the roof is now carbonfibre and features a lower middle section (overall the Pro is just 14kg lighter). It’s these elements that mark out the Pro visually, along with the obvious aero appendages: there are louvres now cut into the front wings to extract air from the wheelarches, thereby reducing front-axle lift, and the larger front splitter that juts out from the nose is complemented by dive planes attached to the front corners. A vertical blade behind each rear wheelarch helps channel air towards the back of the car, while the rear wing has an additional Gurney flap for more downforce and now sits on milled alloy supports. All-in, the changes aren’t massive compared to the already mad-looking GT R, but they’re enough to give the car an even more purposeful air when you see it live in the metal and carbon.

Purpose is something that’s also exuded by the wiry form of Bernd Schneider, the multiple DTM-winning legend who’s going to be leading our meagre four laps around Hockenheim. He doesn’t hang about, and what mental capacity I have left over has to cover both learning the car and the subtleties of the circuit, so please excuse me if this isn’t the most comprehensive of early verdicts on the Pro. We also aren’t getting to drive the standard GT R on the same track, on the same day, so it’s difficult to quantify how the additions to the Pro improve over the already talented standard car. Sorry for the excuses, but I figure it’s better to be honest. It’s worth remembering too that the regular GT R was the surprise of our track test back in, eclipsing the Ford GT’s time around Anglesey Circuit. And the Lotus Exige Cup 430’s, for that matter. On that day, only the 911 GT2 RS 991 went faster.

What I can say, as I do my best to remain attached to Schneider’s slipstream, is that the Pro does feel very much at home out on the track.

It has the R’s same nine-stage traction control system, adjusted via the cool yellow rotary switch in the centre of the dash, so you can fine-tune your safety net as delicately as you’d like, or just switch it oft in its entirety. The Pro is the sort of car where power oversteer, at least in slower corners, is only a twitch of the right foot away, but having said that, neither does it feel like a car that’s always hamstrung by traction at the rear axle. The transaxle layout helps keep some weight over the rear, and as long as you’re progressive with the throttle you can get decent drive out of the corners.

It’s impossible to say just how much extra speed the aero enhancements allow you to carry through Hockenheim’s faster corners, but the stability of the car is very impressive, and when it does start to move around, the long wheelbase and cabin-aft seating position mean it’s very easy to get a sense of what’s happening down at the road’s surface. As ever, the GT’s long nose changes direction much quicker than you might at first imagine; only small movements of the wheel are required to get the car to turn in, which is something it does with real alacrity.

Unfortunately, the brakes on this particular car have clearly taken a real pasting here over numerous laps, and the pedal response is mushy, although to be fair the stopping distances aren’t showing any signs of lengthening. Schneider is clearly using his stoppers to the max, the tail of his Pro slightly wriggling from side to side as the weight transfers forward under extreme duress. Brake with this sort of force and the downshifts from the seven-speed Speedshift DCT gearbox only just about keep up, each click of the left-hand paddle and the subsequent gear engagement being punctuated by a tiny delay – it feels much more pronounced than that but, of course, time seems to slow down markedly in circumstances such as these. Having said that, upshifts are quick enough, the whole digital instrument panel (more about which over the page) flashing red beforehand in a clear and nagging message that the rev limiter is imminent in its intervention.

The beauty of the Pro, and the regular GT R for that matter, is that it combines its ability with a real sense of theatre. From the brutal soundtrack, which genuinely could be an in-car vid from a Cobra at the Goodwood Revival TT race, to the low driving position in some fabulous, no-nonsense bucket seats, with the Alcantara-covered steering wheel pulled out towards you like in the racing version, and not to mention the roll-cage that Alls most of the rear-view mirror, the Pro oozes aggression and purpose from the moment you drop down into the cabin.

There’s a 40 grand price difference between the GT R and the £188,345 GT R Pro, but the latter is a limited-production model, plus some of the aforementioned items fitted to it are options on the regular GT R, which goes some way to negating the price difference between the two. There are some deadly serious rivals at this money, of course, but on this first brief experience at least, the Pro has little to be afraid of.

+  A GT R fine-tuned for the track

–  You’ll pay for the privilege

Above left: output from the 4-litre twin-turbo V8 is unchanged from that of the regular GT R at 577bhp and 516lb ft. Left: which is still more than enough to indulge in a little power oversteer – or a lot. Above right: roll-cage part of Pro’s standard AMG Track Package.