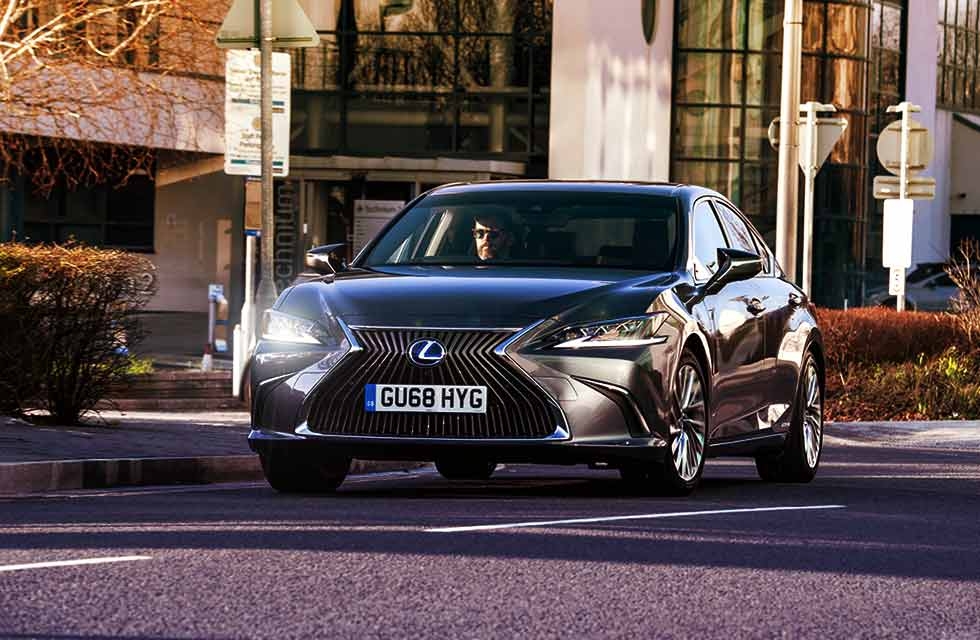 The ES is Lexus’s newest volley at the executive class – but in a world full of diesel and plug-in SUVs, can a hybrid-only saloon make sense? Words: Alex Grant & Photos: Lexus.

With its CO2-focused regulation driving consumers towards diesels, Europe has traditionally had a tricky relationship with hybrids. But, after 20 years, the stars are starting to align in the favour of the earliest adopters. New technology is delivering better driveability and improved fuel economy at motorway speeds for less initial outlay, just as regulatory pressure and consumer attitudes turn on diesel. But, while 99% of Lexus’s UK sales last year were hybrids, the ES still has a tough task on its hands.

The executive saloon segment might be technology-rich, and arguably less focused on pounds-and-pence running costs than smaller cars, but it’s a conservative part of the market and Lexus isn’t following the crowd. The ES is replacing the GS in the UK, going head-to-head with the mostly diesel- powered Audi A6, BMW 5 Series and Mercedes-Benz E-Class, and doing so with only a petrol-hybrid drivetrain. Aggressively priced and free from the tax burdens of the diesel engines this segment still tends to default to, Lexus is aiming to sell 1,000 units per year in the UK – relatively small, but twice the volume of its predecessor.

Western Europe has never been offered the ES before, but this is a 30-year-old component of the Lexus range and a focus on new markets means it’s bigger and more upmarket than previous versions. It’s a striking car, remarkably long and low in silhouette and, in the expected best-selling F-Sport trim, almost concept-like on its 19-inch wheels and spindle grille made up of interlocking L shapes. While hybridisation might once have been a later add-on, for the ES it’s a foundation – enabling the svelte proportions and the sporty driving experience Lexus is hoping might lure Europeans out of the usual suspects.

Removing that ‘rubber band’ feeling – the disconnect groan of the petrol engine whirring through the revs faster than the vehicle builds speed – wasn’t just a case of software updates. Lexus’s fourth-generation hybrid system, some of which was introduced with the latest Prius, turns the traditional petrol/ electric working relationship on its head. The all-new 2.5-litre Atkinson cycle petrol engine has a longer stroke, which improves low-rev torque, while the larger of its two motors is geared to provide more high-rpm power. This means there’s less need to wring the power out of the petrol engine under load, in theory meaning it should behave more like a conventional automatic transmission.

It comes close. The European-specific chassis setup is firmly sprung, though not uncomfortably so, while the steering is reassuring weighty – both inspire confidence on winding cross-country roads. However, as a driver’s car, the hybrid system is still an adjustment for those used to the mid-range punchiness of a diesel engine. Linear power delivery numbs the generous- sounding 215bhp and, when pushed for sudden bursts of acceleration, the engine still whirrs unnaturally through the revs. Adjustments to driving style are smaller these days, but being different isn’t always a selling point in this segment.

However, task the ES with a long, high-speed journey – where the only noise intrusion is tyre roar and the engine can switch off enabling the car to glide on its electric drivetrain – and it might make you wonder why anyone would pick a grumbiy diesel for the same job. Lexus isn’t planning a plug-in version (yet) but stressed that, when left to its own devices, the drivetrain will switch the engine off for around half of a journey. It’s even developed a specific bulkhead insulation to filter out the high-pitched motor noises when it’s running on battery power. Sportiness might not be its forte – but that’s perhaps missing the point.

Driving aside, hybrid technology has improved to the point where it’s much easier to package, and the ES was engineered with this as the primary drivetrain. The transaxle and power control unit are lighter and small enough to be stacked under the low bonnet line without affecting pedestrian safety, while the compact battery cooling system means the pack can be slotted into a compartment under the rear bench. Petrol versions have an empty cavity in its place, and the compromise of a slightly higher centre of gravity as a result – unfortunately there was no opportunity to compare on the launch.

In a segment where high-mileage comfort counts, cabin quality also stacks up well in the ES’s favour. Fit and finish are impeccable, with soft-touch materials, accents of satin silver, and a large central rev counter on F-Sport models which slides left and right to reveal extra instruments. Rear legroom is generous, rear headroom less so, while drive modes are selected by a rotary knob on the side of the binnacle – a bit like the LC, but without the reward for slotting it into Sport.

UK customers will get a choice of three trim levels – the basic ES version which has cloth upholstery, the all-options- ticked Takumi, which takes pricing over £40,000, and the aggressive F-Sport with its large wheels, bucket seats and adaptive suspension. It’s the best all-rounder in terms of spec, though the larger wheels bump up CO2 emissions a little, and a few of the range-topping options can be added with the £4,000 Takumi Pack. This includes the 12.3-inch high- definition infotainment fitted to all of the launch cars – rich in features but still as frustrating and unintuitive to use as Lexus systems of old. There’s also no Android Auto or Apple CarPlay to get around that clunkiness, which feels like an odd omission in an otherwise high-tech executive car.

The ES has a new opportunity to capitalise on a market turning its back on diesel -helped by a four percentage-point company car tax penalty for heavy oil. It’s a stylish newcomer with a mature hybrid system behind it, albeit one which feels well placed for a plug-in range to augment the efficiency it already offers. Ironically, like its direct rivals, its biggest competition is the similarly competitive hybrid SUVs with which it shares a forecourt.

The ES replaces the poor-selling GS with sleek looks; imposing grille stands out amongst its peers; coupe-esque lines hint at a sports-car attitude despite the economy promise.

Sleek lines are all well and good, but they impact on boot space; distinctive daylight running lights adorn the front; sumptuous interior is neat and well-equipped, though no Andoird Auto or Apple CarPlay are disappointing; the hybrid powerplant combines an electric motor with the 2.5-litre petrol unit; front and rear seating are supportive.