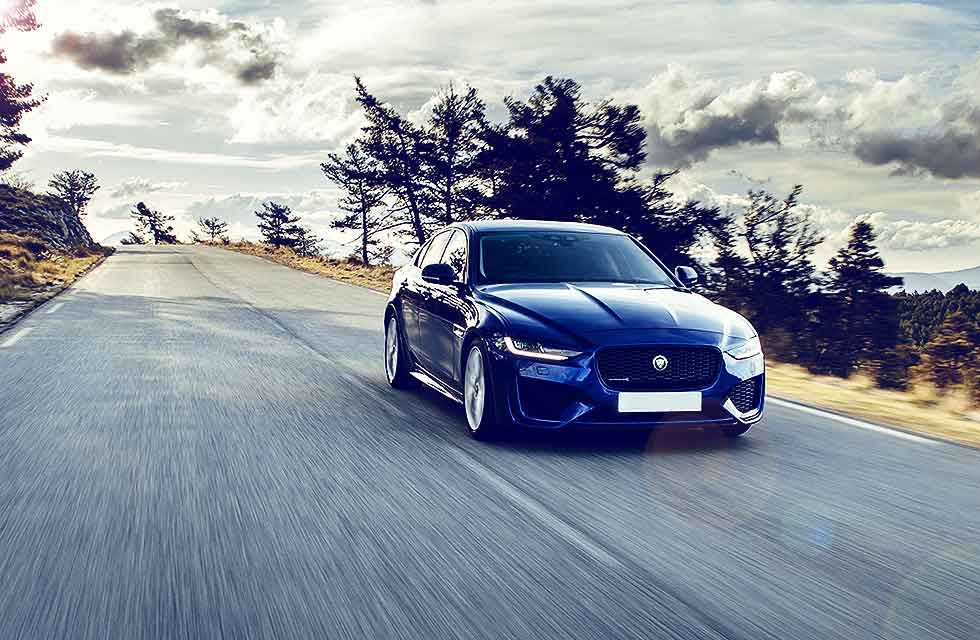 The XE has never sold in the numbers that Jaguar expected. Can this mild, but effective, midlife facelift change that? Words Paul Walton. Photography David Shepherd/Jaguar.

Jaguar has a fine track record in midlife facelifts. From the 2.4 to the Mk 2, the XJ6 Series 2 to Series 3, the XJ40 to X300 and the X350 to the X358, they were all sensible improvements to extend the cars’ lifespan and desirability. Even the X250 generation of XF looked better after its mild 2010 refresh – simply slimmer LED lights.

A lot rides on the XE’s refresh for the 2020 model year. Despite the praise that has always been lauded on the car, it has never managed to break the stranglehold that the big three German manufacturers have on the compact saloon market. Will this subtle facelift be enough to change that?

The update isn’t huge and I doubt anyone other than the experts will notice the new bumpers, the narrower front LED headlights, the rear lights with their new ‘chicane’ graphic, or a slightly wider, but slimmer, grille. Yet, together, they improve the car’s appearance, giving it a slightly meaner, more assertive look.

However, it’s the car’s interior that has received the biggest Botox treatment. The cheap plastics previously used throughout the XE, and which came under the heaviest criticism, have – thankfully – been replaced with better-quality materials to match the car’s upmarket appeal.

Even more striking is the digital ventilation control panel in the centre console. Its modern and contemporary design is exactly what was needed to lift the XE’s previously dowdy interior, even if it was sourced from the I-PACE. I especially like the way the temperature is shown in the two large dials, resulting in a simple, clean design. The steering wheel is also new, again shared with the all-electric car, and features hidden-until-lit graphics and capacitive switches for easy control of key functions. Finally, Jaguar’s Pistolshift gearlever replaces the former rotary selector, its addition being a clear sign that Jaguar is positioning the car at a younger, sportier audience. These are small changes, but, like the exterior, they do much to improve the car’s appeal.

The XE now has the option of three 2.0-litre four-cylinder engines: a 180PS (177bhp) diesel, and petrols with either 250PS (246bhp) or 300PS (295bhp). Having recently driven the old XE with the 300PS for the launch of the Sport model – a trim level that, sadly, hasn’t survived the facelift – and with diesels no longer as popular as they once were, the gorgeous Caesium Blue example I have here has the smaller petrol engine.

Although it has always received second billing next to the headline-grabbing 300PS, the 250 still offers a solid performance: 60mph is reached in a mere six seconds and it has a top speed of 155mph. But, the figures only tell half the story. What they don’t say is how eager the engine is, how its acceleration is strong and immediate while remaining quiet and refined, yet still offering a deliciously raspy exhaust note when pushed hard.

The dreadful six-speed manual gearbox has been deleted as an option, leaving just the eight-speed automatic as standard, which changes quickly and efficiently. The steering wheel-mounted paddles remain, although they’re now made from a single piece of aluminium rather than a plastic so cheap my fingertips came out in sores. The paddles also feature a firmer, better-damped action, and I discover that Changing gear now has the tactility of turning on a Bose stereo.

The XE has the option of the Clear Sight rear-view mirror, which projects the image from a wide-angle rear-facing camera into a frameless, high-definition screen. Initially, I was sceptical. Cars have had mirrors since the dawn of the automobile and I’m usually of the belief that if something isn’t broken don’t fix it. However, the screen is as clear as an actual mirror and gives the driver an unobstructed view of the road behind, unhindered by tall rear-seat passengers, poor light, or rain on the rear screen. It comes as part of the technology pack (which also includes head-up display, interactive driver display and wireless charging), so it’s not a cheap option at £1,820, but is one I can thoroughly recommend.

One thing Jaguar hasn’t changed is the car’s driver appeal. While the 250PS doesn’t have all-wheel drive (an option for the diesel and standard with the 300PS), there is still oceans of grip that, along with the always-controlled body-roll and sniper-precise electric steering, means the XE remains the sharp sports saloon it was always known to be. The suspension setting is rather hard, though, and anything other than marble-smooth tarmac makes its presence felt in the cabin, although it’s never too obtrusive.

Time will tell whether this updated XE can ultimately make a bigger impact in the premium compact saloon market. It won’t be easy, because consumers generally stick to brands like paint to walls or jam to pretty much anything. But, should any Audi, BMW or Mercedes drivers dare to step away from their cars, they’ll find that Jaguar’s excellent track record for successful facelifts continues.