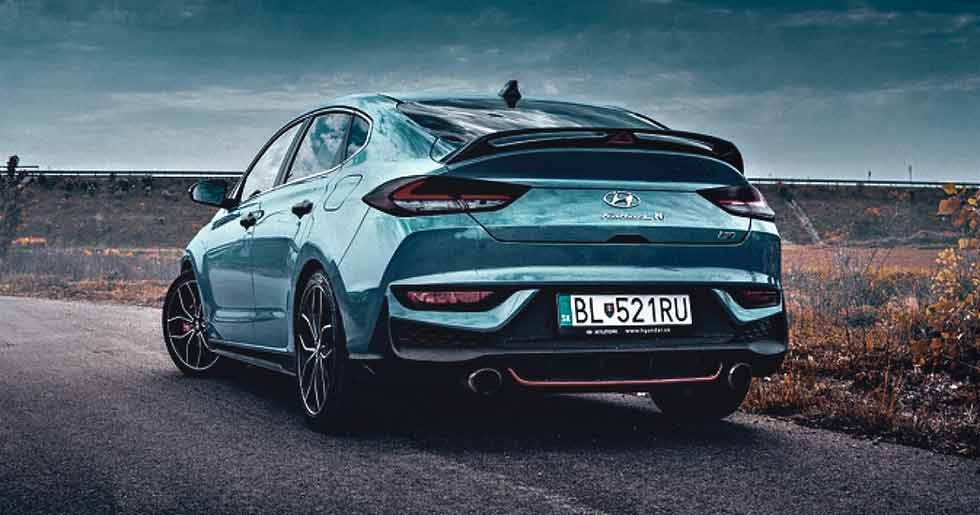 The 2020 Hyundai i30 N hatchback has quickly become an Drive-My favorite. Can the Fastback version do the same.

When it comes to a history of high performance, Hyundai is barely out of short trousers. Not that this is having any impact on its ambitions. The 130 N hot hatch – itself worthy of mention in the same breath as Peugeot’s 308 GTi and, whisper it. VW’s Golf GTI – Is only the beginning: in the pipeline is a product range as far reaching as a crossover and a bespoke N performance car. Next to arrive from the firm’s Nurburgring test centre, however, will be this, the i30 N Fastback.

As its name suggests it’s a hot version of Hyundai’s recently launched five-door coupe. It’s intended as a more mature proposition for buyers who want the pace and poise of the hatch but are put off by its aggressive styling and soundtrack. It doesn’t officially make its debut until this October’s Paris motor show, but Hyundai’s N division (headed by former BMW M boss Albert Biermann, should you need reminding) is keen to get things right straight out of the box and has therefore provided Drive-My with early access to a pre-production example late In the model’s development cycle.

Despite wearing a camouflage wrap it’s still clear to see the Fastback has a more elegant form than the hatch, the sloping rear roofline and extended tail making it look lower, but less aggressive, in its stance. Yet there are clear hints of N pedigree beneath, not least the ducktail spoiler on the tailgate, added to improve high-speed stability (there are no numbers yet, but expect a higher top speed than the hatch’s 155mph).

The 19-inch alloys and the larger brake discs and calipers are taken from the i30 N hatchback, as is plenty of other hardware.

This includes the 271bhp turbocharged 2-litre four, the six-speed manual gearbox and the electronically controlled limited-slip differential. Also carried over is the MacPherson strut front suspension and independent multi-link rear axle, albeit with a number of tweaks aimed at sharpening the Fastback’s handling but not at the expense of comfort.

The majority of the changes are focused on the front suspension, where spring rates have currently been reduced by five per cent and the anti-roll bar slimmed by a single millimetre. Biermann’s team have also changed the burrp-stops in length from 55 to 62mm, the aim being to increase control at the limit. Curiously, the pre-prod car we tried went without the rear strut brace – it’ll likely be standard in the UK. but in most other markets it will be an option.

If Hyundai intends for its N Fastback to be a little more restrained compared to the hatch, it’s succeeded, with the engine far less exuberant here. The gurgling idle is still there, but in this example it’s more muted. It’s the same on the move, where even the more aggressive N mode’s trademark pops and crackles on the overrun are far more muffled. Hyundai says the volume will be pumped up for UK cars, but if the Fastback is supposed to be the more refined choice then I’d say this less ostentatious approach works nicely.

What hasn’t changed is how the motor propels the Fastback along compared with the hatchback. The torquey motor needs to be worked hard to overcome the car’s mass (expect the Fastback to weigh around 50kg more than the hatch, so closer to 1500kg), but it responds well the harder you work it and the exercise is made more enjoyable by the manual gearbox’s short and precise shift action.

Our test route starts in the rain, but it’s clear the Fastback retains the hatch’s planted feel, with plenty of grip providing encouragement to dial down into the car’s inherent good balance. Cycling through the numerous driver modes presents the bespoke personalities of the Fastback’s engine, steering and chassis, but it’s clear that the hardest N setting is still way too stiff for most roads, causing the car to hop and bounce over the bumps and camber changes. Sport mode offers a more useable operating window, while Normal allows the car to breathe with the surface. With more time, as we’ve found with our Fast Fleet hatch, finding the Fastback’s configuration sweet-spot should unearth the car’s true potential.

The changes to the front axle are hard to detect at first. There’s still bags of traction thanks to the sophisticated electronic diff, which distributes torque between the front wheels with an unexpected crispness. But time on Millbrook Proving Ground’s rollercoaster Hill Route highlights the changes. With a dry surface allowing more load to go through the chassis there’s a more natural response from the steering. There’s more front-end bite, too, as the softer set-up resists understeer for longer, with the rear end contributing to the cause on a trailing throttle. It’s a very fast, involving machine, but if you’re looking for more flair the i30 N hatch and Peugeot 308 GTi are more expressive machines.

It’s encouraging that Hyundai is willing to develop a series of cars with differing characteristics. The contrasts between the i30 N hatch and Fastback may seem small, but they are significant enough to deliver different personalities to appeal to different audiences. It’s an approach the VW Group would do well to adopt in a bid to inject some individuality into its VW GTi and forthcoming Cupra models.

–  N mode too much for the road, could be more involving