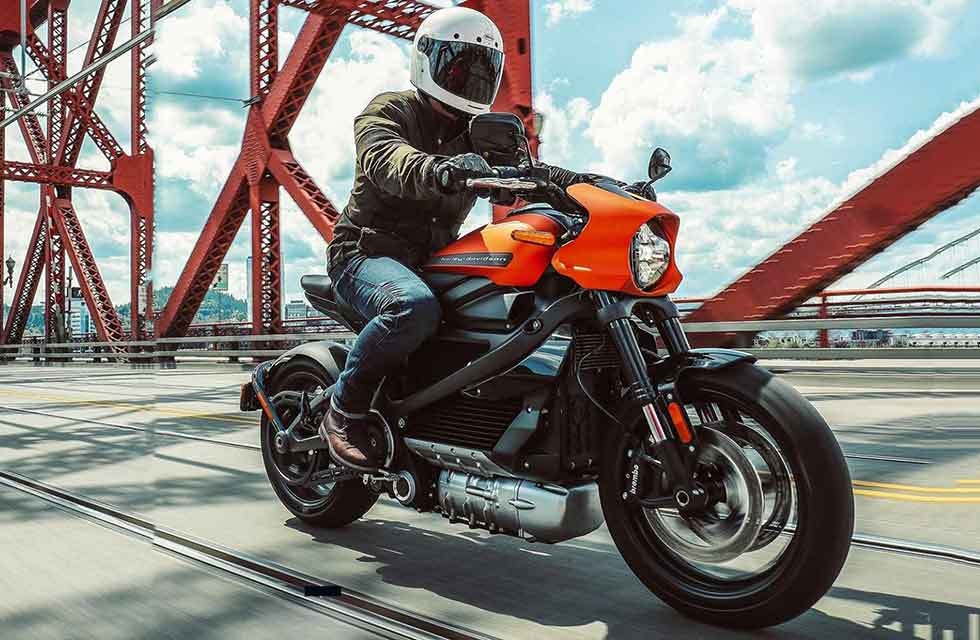 A EV-motorbike? In DRIVE-MY? Surely not. But the all-electric Livewire is more than just a bike – it’s a fresh start for Harley-Davidson.

Leccy Harley – Harley unmistakable – vee-twin burble… or does it? Not when the American icon is powered by electricity

I COULD START WITH THE NUMBERS.

I could tell you about the range and recharging time, how many torques it has or scare you with the price. I could bore you to tears with why Harley’s engineers insist on calling the battery a Renewable Energy Storage System, or give you the marketing blurb on why the motor pulses like a heartbeat when you’re sitting at the lights. But honestly, who gives a monkey’s? If riding this bike – the first all-electric Harley-Davidson – doesn’t fire your synapses, drain your adrenal glands and leave you a quivering pile of emotion, then it’s doomed to failure.

Which is why – in the name of good journalism – I find myself with the throttle cracked wide open on a marshalled section of road just outside Portland, wondering when’s appropriate to get on the brakes. I decide 108mph is sensible, given the quoted top speed of 110mph. Wouldn’t want to overdo it. Bloody Nora, this thing is fast. A dense wall of thrust from the moment you twitch your wrist until your bottle runs out; no respite for gearchanges, no tailing off as the speed climbs, just twist and zap and remember to breathe if you can. It’s all very… un-Harley.

But that’s the point. This, don’t forget, is a company founded in 1903, by William S. Harley and Arthur Davidson, their first bike built in a garden shed with Harley-Davidson Motor Company scrawled on the door. A company with a reputation for the anti-social: loud vee-twins, leather waistcoats, fierce loyalty. You don’t buy a Harley-Davidson, you pay a joining fee to the club. And yet, despite still being a juggernaut of a brand, its bikes aren’t clicking with a new generation of socially conscious, tech-fuelled customers. Time for a U-turn, then, to rewrite what we all imagine a Harley-Davidson to be and to prove this dinosaur’s still got some moves.

Back to Portland. More odd behaviour in the corners. It’s agile, easy to lean over and, with no gears or clutches to worry about, more of your brain capacity is freed up to handle more speed. You end up concentrating on rolling the throttle back and forth, keeping your inputs smooth and using the regen, rather than the brakes, to shed momentum. OK, you need to wrestle it a bit in the really quick direction changes, thanks to its 249kg heft (a Ducati Monster with similar performance weighs around 50kg less), but you just end up driving around it – slow(er) in, very fast out – and laughing like a lunatic every time you give it the full Barry Sheene.

It’s worth mentioning now that my riding experience is… limited. I’m fairly new to this whole motorbike thing, my riding style best described as cautiously optimistic. Now re-read the previous paragraph and you’ll get some idea of how idiot-proof the Livewire is to operate, how confidence-inspiring it is and how sold I am on the experience.

But here’s the ‘but’. I’m struggling to find a single thing, beyond the badge, that makes it a Harley Davidson. It’s not a cruiser, it doesn’t have studs around the seat trim or leather tassels on the handlebars, and there’s a chrome-plated V-twin missing. More than that, there’s no noise.

A Harley is something that pulls up next to you at the lights and rattles your eyeballs; it’s obnoxious and proud. Here, there’s nothing. Actually I lie – there’s a high-pitched whinny from the bevel gears in the single-speed ’box, which isn’t entirely unpleasant, but lacks any sort of drama. Will the silence deter die-hard Harley fans? Yes, definitely, but they can still buy noisy petrol-powered bikes if they so please – the Livewire is aimed at bringing in a new type of buyer to the brand, perhaps one who has never considered riding a motorbike before.

Around town, you actually feel more sociable and socially acceptable. Cyclists pull up for a chat, people in cafés can continue their conversations, and then, when you’re up and moving, the wind whistling past your helmet means you don’t really hear your own thunder anyway. No more faffing to find neutral at the lights, either, or your biting point when they turn green. The low-speed throttle mapping is superb, smooth as you like, and here’s a bonus for 10; because you don’t have a series of controlled explosions between your thighs, there’s no heat output from the batteries or motor, a joy when you’re sitting in traffic on a hot day.

The figures stack up, too. Harley claims a range of 146 miles around town (no WLTP figure yet) or 88 miles when you throw in some decent roads, which isn’t bad when you consider a superbike driven hard would get much the same from a tank. For the commute it’s plenty, for a Sunday blast it’s adequate, for touring Scotland it might be found wanting. Unless you can find a DC fast-charger near your bothy – then it’ll charge from 0–80 per cent in 40mins and 0–100 per cent in an hour. The motor delivers 104bhp and 86lb ft of torque, 0–60mph takes three seconds if you’re plucky enough to find out and there are four driving modes – Road, Sport, Rain and Range – that tweak the throttle mapping, maximum power available, traction control and regen level.

“BLOODY NORA, THIS THING IS FAST… JUST TWIST AND ZAP”

Funny how Harley is perceived as a company stuck in its ways, welded to a tried-and-tested formula. It’s why the decision to go full electric before Suzuki, Ducati, Yamaha and the rest smacks of a snap boardroom decision to stay relevant, but it wasn’t. The first electric test bikes were running nine years ago, then there was Project Livewire in 2014 – a run of 32 prototypes Harley flew around the world, offering customers a go on in return for their feedback. Twelve thousand customers. That’s several filing cabinets of feedback. Based on that, the production Livewire is a ground-up redesign. A successful redesign it has to be said – somewhere between a cruiser and a sports bike, the longitudinal motor sits at the bottom with the 15.5kWh battery on top.

It’s chunky in profile, but without exhausts, slim from the front and with a waspish tail. But there’s a problem. A big one. UK prices start from just under £29,000. Yep, catch your breath, because that’s a ton of money when you consider you can buy cars, actual cars with four wheels and four seats like the Honda e, Peugeot e-208 and Mini Electric, for less. Harley will tell you it isn’t even the most expensive bike it makes, and that it’s a premium brand with premium prices, but there’s no way around the fact that’s eye-wateringly dear and will be a major barrier to the Livewire selling in the numbers it deserves. Shame, it’s a genuinely brilliant bike to ride.

I accept that it will be too sanitised for certain factions, and too expensive for most, but if you get it… go and ride it. And while you’re there, tip your helmet to Harley – a company saturated in history, but willing to take a risk, to reinvent itself, to walk into the fire and fury of its loyal disciples in order to future-proof and capture a new audience. Ballsy stuff.

Great bike, shame about the name. Come on, lads. E-Zee Rider. Staring you right in the face