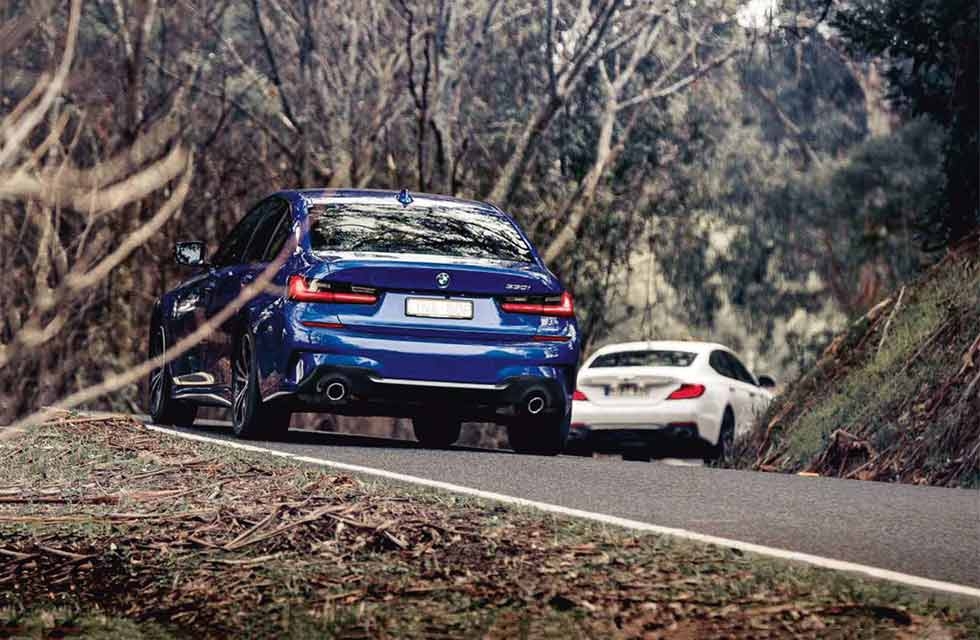 Second chances don’t often come around in the Australian motoring business. This is an unforgiving market that can see companies and models chewed up and spat out without a moment’s thought. Hyundai knows this all too well. Its Genesis luxury sub-brand arrived in Australia in late 2014 comprising just a single large luxury sedan. The G80 (nee Hyundai Genesis) didn’t grab luxo buyers’ attention, struggling to sell outside the limo-driver market, and was eventually dropped. But now Genesis is back for a second crack as a premium brand, and its letter of intent is the G70.

This midsizer is the real hero for Genesis, with a six-model line-up on offer, and a choice of two engines. We’ve skipped the 2.0-litre turbo four and gone straight for the 3.3-litre twin-turbo V6 in 3.3T Sport guise (at $72,450, the most affordable of the three V6 models) to take on the G20 generation of the BMW 3 Series, the seventh in a lineage that dates back to 1975. In its first Wheels comparison test (April 2019) the G20 330i swatted aside three Euro rivals without raising a sweat. A Korean upstart with next to no luxury heritage should be no worries then, right? Thing is, the Genesis is no regular rookie. The G70 breaks new ground, but with former BMW gurus Albert Biermann and Fayez Rahman taking care of its dynamics, and former Mercedes-Benz interior stylist Bozhena Lalova in charge of the finer touches, Namyang has assembled a crack team that makes Seal Team Six look like a pack of interns. Suddenly Munich’s assignment looks far from a foregone conclusion.

Pricewise, there’s barely $1500 to split them in un-optioned form. But while the Genesis 3.3T Sport carries a marginally more expensive at $72,450 list price, as-tested it’s comfortably the cheapest of the pair here as our car didn’t come with a single option. Ostensibly there aren’t any. It gets the whole options list ladled in as standard. BMW Australia, on the other hand, raised the as-tested figure for the 330i by $6500 to $77,400 with only a modest run of box-ticking. Of the available options, only the M-Sport Plus package ($2000) is a must-have, bringing with it a proper limited-slip diff, sports suspension that lowers the ride height by 10mm, adaptive dampers, stronger brakes, and visual enhancements such as sportier bodywork and trim.

Adaptive dampers, LSD and Brembo brakes are standard for the Genesis, while these performance upgrades only come via the aforementioned option pack for the BMW.

Based on a similar modular platform to the Kia Stinger, the G70 is shorter in both overall length and wheelbase. The 3 Series is on BMW’s ‘Cluster Architecture’, which brings with it hydraulic bump stops to improve ride comfort. Both the G70 and 330i deliver a driving experience that

highlight the inherent rightness of front engine and rear-wheel drive. But somewhat surprisingly, it’s the Genesis that’s the more dynamically adept of the pair, providing greater confidence on turn-in, settling smartly onto its outer contact patches, and then delivering its generous power to the ground on corner exit. When dealing with mid-corner surface changes, the G70 excels, while the BMW requires small steering corrections to remain on line. Despite an identical 2.3 turns lock to lock, the 330i’s steering isn’t as alert as the G70’s off centre.

Yet as far as primary ride is concerned, the BMW edges the Genesis. The new 3 Series’ ride is buttoned-down yet superbly composed, with its hydraulic bump stops mopping up bigger hits. The G70, despite its locally tuned suspension from Hyundai’s Aussie engineers, feels less well resolved on genuinely poor bitumen, with more appreciable noise pathways into the cabin. Move to engines, however, and a more predictable storyline unfolds, given the cylinder counts and capacity difference. The turbocharged four-cylinder in the 3 Series is the most powerful in the 330i badge’s history, producing 190kW and 400Nm, fed to the rear wheels via an eight-speed automatic gearbox.

But that’s a peashooter compared to what the Genesis is packing. The 3.3-litre twin-turbo V6 first appeared in Australia slotted under the bonnet of the Kia Stinger; here, the 272kW/510Nm powerhouse is mated to Hyundai’s own eight-speed automatic, instead of the ZF-supplied unit in the Stinger. Its power advantage becomes abundantly clear the moment you press on, the Korean car thrusting you back into the seat with its great gobs of torque between 1300 and 4500rpm.

The svelte BMW enjoys an almost 200kg weight advantage, meaning it will sprint to 60km/h in the exact same 2.7 seconds as the Genesis. Beyond that, though, the G70’s grunt gaps the German. It ekes out nearly a second by the time triple digits appear (4.9sec vs 5.8 from 0-100km/h). The Korean is almost a second quicker across the standing 400m, with a 15km/h speed advantage across the line.

So while the Genesis is a level above in straight-line athleticism, the BMW still provides a real sense of urgency in its sprint, with the 2.0-litre engine revving harder to a 6950rpm cut-out (compared to the G70’s 6200rpm upshifts). The extra capacity, cylinders, and turbo bring a greater appetite for fuel, obviously, resulting in the Genesis drinking an extra 14 litres of premium unleaded during our 460km test.

Despite having been in the country only a handful of months as a stand-alone brand, Genesis is a tantalising option for customers wanting a luxurious ownership experience. Currently there is only one standalone dealership, a showpiece studio in Sydney’s Pitt Street mall, which will be joined by similar spaces in Brisbane and Melbourne in 2020. Test drives can be arranged at your work or home, while owners who live within 70km of a service centre can have their vehicle picked up and dropped off free of charge come service time, which is free for the first five years.

It goes further: Genesis offers a five-year warranty, compared to BMW’s three. That said, while you won’t be given the same pampered treatment, BMW owners do have the safety net of a comprehensive dealer network spread across the country.

So it’s a close-fought battle, but the more polished and well-rounded BMW does enough to retain its spot at the top of this class … just. Surprisingly, though, the 330i is not top dog for the hard-charging driving enthusiast – that honour is snatched by the Genesis G70.

It’s a hugely impressive achievement to outperform the class leader on debut in an area that was previously the 3 Series’ USP. The G70 is more engaging to push hard, more resolved, and more predictable on winding roads with a fluid and satisfying character, while the BMW can feel – comparatively, at least – just a degree more aloof. That’s not to say it’s in any way dynamically disappointing – quite the opposite – but the 330i just can’t reach the heights of the newly raised bar.

Where the BMW cements its narrow victory is via its higher-quality equipment and superior overall ambience. If you’re more concerned with substance, its far bigger boot must also count for something. It does a more convincing job of delivering a premium look and feel, while smartly managing the compromise between wellsorted handling and polished damping.

The ownership experience offered by Genesis will tempt enough customers towards the newcomer, and those who dive in headfirst will be rewarded with cracking pace and dynamics, but ultimately the BMW is the more persuasive day-to-day proposition. Now, where did that winding road go?

Purely against a criterion of hard-driving thrills, G70 trumps 330i

BUT WHO’S GOT THE SUBSTANCE?

New digital instrument cluster and infotainment is userfriendly, and offers operation via the familiar rotary dial. Finding the Goldilocks driving position is easiest in the BMW, which allows you to sit lower, with adjustable side bolsters. Rear seats have adequate legroom for an adult, but you’d need toes like Daryl Beattie to fit your feet under the front pews. More rear headroom than in the Genesis.

Infotainment system in the Genesis is touch-screen only, and feels a bit too Hyundai parts-bin for this type of premium application. Quality of materials also feels inferior to the BMW, with harder, scratchier surfaces. Front seats feel designed to accommodate larger body types, while rear bonce-room is less generous than the BMW; anyone over six foot risks headbutting the roof on bigger bumps.

Rear-seat headroom in the Genesis is marginal when you’re as tall (and dashing) as this pair If outright power isn’t high on your priority list, Genesis has an offering that could be right for you. Along with the twin-turbo V6 trio, the G70 can be specified with a 2.0-litre turbo four delivering 179kW and 353Nm. Matching the spec level on our V6 test car is the base 2.0T, which starts at just $59,300. At the top of the four-pot spec tree is the 2.0T Ultimate, retailing for $69,300, and fitted with a level of equipment that would require extensive box-ticking were you trying to mimic it on the 330i

Perhaps surprisingly, the 330i is not top dog for the hard-charging driving enthusiast