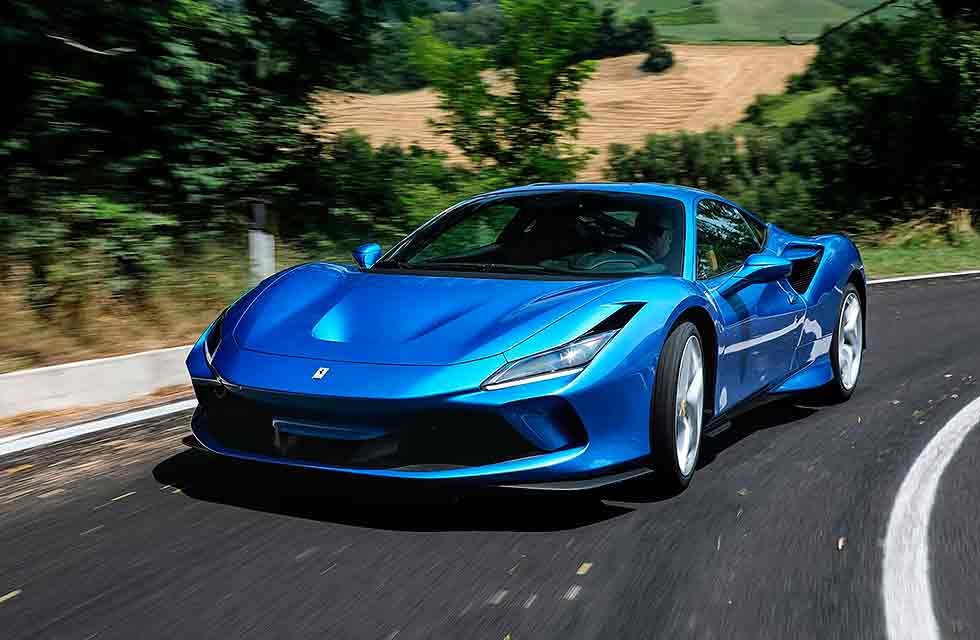 Fistful of Ferraris: F8 Tributo – so wide-ranging are the mid-life changes to Ferrari’s 488 GTB that it’s got a whole new name. The F8 Tributo pays tribute to its reworked V8 turbo engine – now 720hp – but other improvements are just as significant, as we discover in our road and track test. Story by Chris Rees.

Does your car have a hot-tube resonator? Well let me tell you, the answer is no. You really want one, though, right? It may sound like something out of Barbarella but you’d be right to hanker after a bit of hottube resonance action. I’m finding this out first hand, as the unique resonating tube that runs from the new 2020 Ferrari F8 Tributo’s exhaust forwards to the cabin to scintillate the tiny bones in my ears.

That’s just the first of the F8 Tributo’s many major achievements. Somehow, the 488 GTB (which the F8 replaces) never really excited me in the sound department. Its turbo-boosted V8 was tuned for devastatingly efficient performance, but lacked a soundtrack to really set the heart aflutter. So the first of many good pieces of news about the F8 Tributo is the noise. It’s not only louder (up by 8dB at its peak), but also brawnier and more sparkling in the highest frequencies. No, it isn’t yet the aural equal of Lamborghini’s Huracán V10 but it’s much nicer to listen to; and the heads swivelling as you pass by show general approval from the outside, too.

The car that succeeds the 488 GTB – it’s actually a facelift, albeit a pretty huge one – is named after Ferrari’s award cabinetbusting F154 V8 twin-turbo engine, which was launched back in 2015. The F8 Tributo celebrates that V8 by shoehorning in the breathed-on version from the 488 Pista. Well, not quite: it’s actually slightly different. Among a whole raft of changes are new hollow valves, titanium con rods, lighter flywheel, bigger plenum, Inconel exhaust manifold and ball bearing twinscroll turbo with race-spec speed sensor.

That the F8 is faster than the 488 is, therefore, no surprise. But the amount by which it exceeds the 488’s performance is striking, particularly in the upper reaches: 0- 62mph takes 2.9 seconds (versus 3.0 sec), while 0-124mph occurs in a mere 7.8 seconds (versus 8.7 sec). Two of the main reasons for this eye-popping pace are that the F8 has lost weight and is also more slippery through the air. The weight loss amounts to as much as 40kg, if you specify a few carbon options – and there are many more of those than before, including Pista-style carbon wheels, yours for a cool £13k.

Some weight is also saved by using Lexan for the rear screen, complete with louvres – all very F40, and very deliberately so. While the rear screen looks great, looking out of it can be a real pain, especially as the louvres vibrate like a trumpeter’s transparent lips. It’s not just the F40 that’s referenced stylistically: other Prancing legends providing inspiration include the F355 and 288 GTO (twin circular tail lights) and 812 Superfast (interior). Only a very few elements remain from the 488, incidentally – bodywise, for instance, it’s only the roof and doors.

Ferrari claims that, to drive, the F8 Tributo is better than the 488 GTB in every measurable area. Well, we’ve come to Maranello to find out for ourselves. The first test is to take the car from the factory out on to public roads. The locals – who really know their Prancing Horses – instantly recognise it as the newest model and honk, wave and flash approvingly. We take the shortest route to the motorway and head south. It’s immediately apparent that this thing is quick. Really quick. The surge of torque is amazing, especially from 3000rpm upwards, and it’s delivered with Ferrari’s uniquely lag-free response. The surge doesn’t let up, either, the engine happily revving to 8000rpm, with the full 720hp of beans available between 7000 and 8000. Not wishing to lose my licence, though, I back off and stick to a steady 130km/h on the autostrada, where the F8 is unerringly relaxed, despite the extra cabin volume. For a machine that’s so dynamically talented, that comes as a surprise.

But cruising really isn’t the F8’s home territory. That lies in the hills that stretch up invitingly ahead, populated by sweeping bends and hairpins. The Tributo can be fired from corner to corner with machine-gun brutality. Forget mid-engined nervousness; it feels more planted than many cars with four-wheel drive. Turn-in is so confident. You can lean on the front end to a ridiculous degree and it really bites. That’s especially so when you start exploring the inviting steering wheel manettino driving mode toggle. I spend a lot of my time in ‘Race’ mode but even when I switch to ‘CT-Off’ mode, it’s almost impossible to unstick the rear end in the dry. Also for the first time, Ferrari’s ‘fun zone’ Dynamic Enhancer electronics system (now in its ‘Plus’ generation) works even in ‘Race’ mode, not just CT-Off. And the manettino has, for the first time, a wet surface setting – although in baking Italian summer heat, I don’t get the chance to test the claim that you can calmly and safely use full power in the rain.

In the dry conditions of our test, there’s astonishing grip from the tyres; so much so that it takes real provocation to get the back end to slide. In the low-speed corners when I do provoke it, it all feels very benign. Keep the power on and counter-steer, and it all stays very much together. Since this car was designed to be much more usable than the 488 Pista – a true everyday car – much work has been done on the dampers to make use of all the power. On sections of tarmac in the hills so rough they make farm tracks seem smooth, pressing the ‘Bumpy Road’ button eases the ride without affecting handling significantly, and means you can keep your pace preternaturally high. The brakes are perhaps the biggest change you’ll notice over the 488. The pedal requires much more of a hoofing to get the anchors to work. The pedal also has noticeably less travel and there’s more sensitivity to foot pressure.

So much for action on the road. Now I’m back at Maranello, and the security guard is waving me through on to the hallowed tarmac of the Fiorano circuit. It’s time to switch to the track car, the only differences being that it’s got the full smorgasbord of carbon goodies thrown at it to lighten it, and is shod with track-spec (but still road-legal) Michelin Pilot Sport Cup 2 tyres.

After a warm-up lap, it’s time to test the F8 at full pace. Down the start straight, its outright speed is very clear. There’s no need to lift for the left kink before the first sharp corner, when a hoof on the brakes feels utterly confident. A couple of corners later is the moment when I get to test Side Slip Angle Control, now evolved to 6.1 guise. Coming out of the slow right-hander before Fiorano’s bridge, the back end steps out dramatically as I pile on the gas. Yet it doesn’t feel remotely out of control, and simple counter-steering brings the tail back into line. Even in CT-Off mode, the electronics give you enough rope to have a lot of fun, but not to hang yourself; enough to raise your pulse rate, but not stop it.

Next up, Ferrari’s legendary chief test driver, Raffaele de Simone, is on hand to serve up a couple of hot laps – as in scalding hot. Using all the width of the track, and all the oversteer available, he deftly dances the F8 a merry fandango. In Rafa’s hands the F8 is apparently half a second slower than the track-focused 488 Pista around here. Yes, it does feel a little less incisive through the corners, but the fact that the F8 is so close to the Pista’s lap time is a startling achievement.

Those who want a truly visceral experience on the track can still buy a Pista, but overall the F8 is a mightily complete all-rounder that will still muller circuits but is far easier to live with day to day. Now seems a good moment to talk about the aero stuff. Chief among the changes is the front S-Duct, borrowed from the 488 Pista, which alone boosts downforce by 15 per cent. The ‘floating’ vents behind the doors now feed the intercooler alone, because there’s new engine cooling via the rear spoiler, which means intercooler efficiency goes up by 10 per cent. New rearwards-inclined radiators up front save weight and boost downforce, while clever underbody stuff (diffusers and vortex generators) also do their bit for downforce and reduce drag, too. Meanwhile, special ‘channels’ above and below the headlights funnel air to cool the brakes.

As for the interior, every part of the dashboard, door panels and tunnel has been renewed, as have the air vents, steering wheel, 8.5-inch touchscreen passenger display and seats. Despite this, any 488 GTB owner will feel at home here; only the dashboard’s architectural shapes are really different. Oh, and the smaller, more slender steering wheel. It’s all lovely; I just wish Ferrari would do something about the cruise control system, which is unergonomic and requires you to take your hand off the wheel.

Ferrari models rarely get renamed when there’s a mid-life facelift, but the F8 Tributo’s overhaul feels major enough to deserve the new moniker. This is arguably Ferrari’s heartland model, and the early signs are that it’s getting solid customer traction. Prices are up by around £6k versus the 488, starting at £203,476.

UK deliveries start in early 2020, but if you want one, you’re already looking at a 12-18 month wait. I’d be tempted to order mine with the optional carbon Racing seats rather than the somewhat flat and broad Comfort chairs – even at a price of £5184 a pair.

In summary, the F8 Tributo gets the same monster power as the 488 Pista – so it’s very nearly as fast as that track-biased monster – but it feels far less extreme to drive. In fact, it’s incredibly easy to pilot, both at gentle touring speeds and in full-on track attack mode. You can have more fun, safely, through corners. That it also sounds much nicer than before is another advance. Yup, there’s no doubt in my mind that this is another bull’s-eye for Ferrari.

Around Fiorano, the F8 loses only half a second to the 488 Pista. Oversteer is benign and progressive.

Engine gets same 720hp output as 488 Pista, plus a ‘hot tube resonator’. Cabin is completely updated.

“It can be fired from corner to corner with machine-gun brutality. You can lean on the front end to a ridiculous degree”