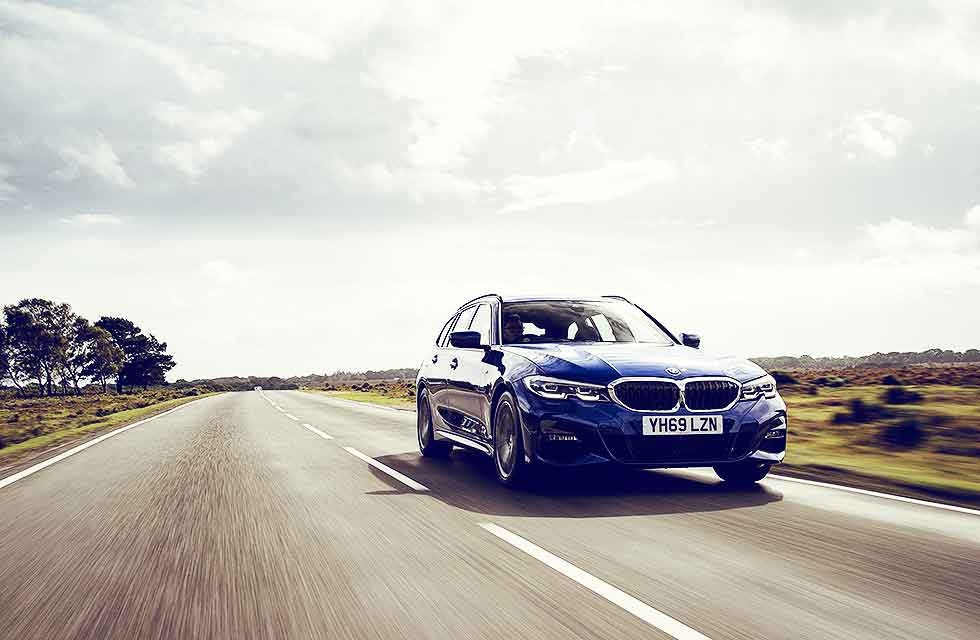 First Drives – Our verdict on the latest new BMWs

When I was growing up in West Cork, Ireland, a family from Dublin used to take regular holidays by the sea, and rented a house just down the road from my family home. I mention this merely because their transport of choice for their break was a black BMW 325i Touring, an E30, with silver BBS wheels and — crucially — a rear window that could open separately to the tailgate.

I try, as a professional reviewer, to be as unbiased about the cars I test drive as I can be. But, I have to admit I’m a sucker for a 3 Series Touring and have been since the age of seven. That black 325i just implanted a vision in my brain of what a cool family car could, and should look like. That hasn’t changed… The 3 Series Touring has, of course, grown larger, heavier and more sophisticated with every generation. Now we’ve hit the latest version, 32-years on from the original, and the news is that it’s just as good. Better yet, the seven-year-old me is not disappointed.

Sharing a structure with the new 3 Series Saloon (obviously) brings benefits. A drop in overall weight, for a start — the new Touring is around 10kg, model-for-model, lighter than before. There’s more space in the boot, too, although in this case the gain is pretty marginal — just a five-litre increase, bringing the total to 500-litres. Not massive, then, but with its seats-folded capacity — 1,510 litres — being certainly handy, and the rear seats spliting three ways — 40:20:40 — BMW has maximised the Touring’s usefulness.

As standard, all new 3 Tourings will get a powered tailgate, and space under the boot floor to stash the luggage cover. Most importantly (well, most importantly for me anyway), the separate, opening rear glass remains. This satisfies both historical precedent, and the fact that I just don’t have the patience for powered tailgates. That glass is also wider than before, aiding practicality and visibility. Further forward, the Touring’s wheelbase has been stretched by 41mm compared to that of the outgoing model, which brings more rear legroom, so this is now a car better suited to the needs of families with everstretching teenagers.

Mechanically, of course, it is the same as the 3 Series Saloon, so you get the stiff, light CLAR platform (shared with the 5 Series and 7 Series) and the same engine line-up. That runs from 320i and 320d at the base of the range, to 330d and 340i at the peak. BMW gave us a 330d and the smooth, lowing roads around Munich to test the new Touring. A 330d xDrive to be exact, although the addition of four-wheel drive was a bit of a waste given that this was one of Germany’s hottest days on record, and the super-heated tarmac was hardly lacking for traction. Still, you can feel the sheer poise of the 330d regardless of the ambient temperature. The combination of adaptive dampers, the new hydraulic suspension bump-stops, and the 3 Series’ super-sharp, responsive and fulsome steering makes for a practical family wagon that can show more than a few supposed sports cars the way home.

Combine that with the grunt and economy of the six-cylinder ‘30d’ engine, and you have a pretty remarkable package. I know — diesel power is hardly fashionable right now, but BMW swears that its new engines meet or exceed every piece of legislation governing emissions. Besides, where else are you going to find an engine that can crack 50mpg, while also putting in a sub-six-second 0-62mph time, and do it with turbine-like refinement? Diesel may currently have pariah status, but there’s no doubting the sanctity of the engineering. Elsewhere, there is the same updated iDrive and digital instrument pack from the rest of the 3 Series range, the addition of more connected online services and a new dashcam setup, which records the last 40 seconds of whatever the cameras for the parking assistant saw. You’ll be able to choose from SE, Sport, M Sport and M Sport Plus Edition when the new Touring arrives in September, with options such as an M diferential to sharpen the handling of the higher-powered models, as well as the usual premium leather and Harmon/Kardon sound system options. Next year, BMW will also introduce the 330e plug-in hybrid model to the Touring line-up, an option that might ease the pain of steering away from diesel.

For now, though, this 330d feels close to perfect. Fast, fluid and fun, yet also practical and useful. The seven-year-old me has found the modern-day match for that near-mythical 325i Touring experience of yesteryear.