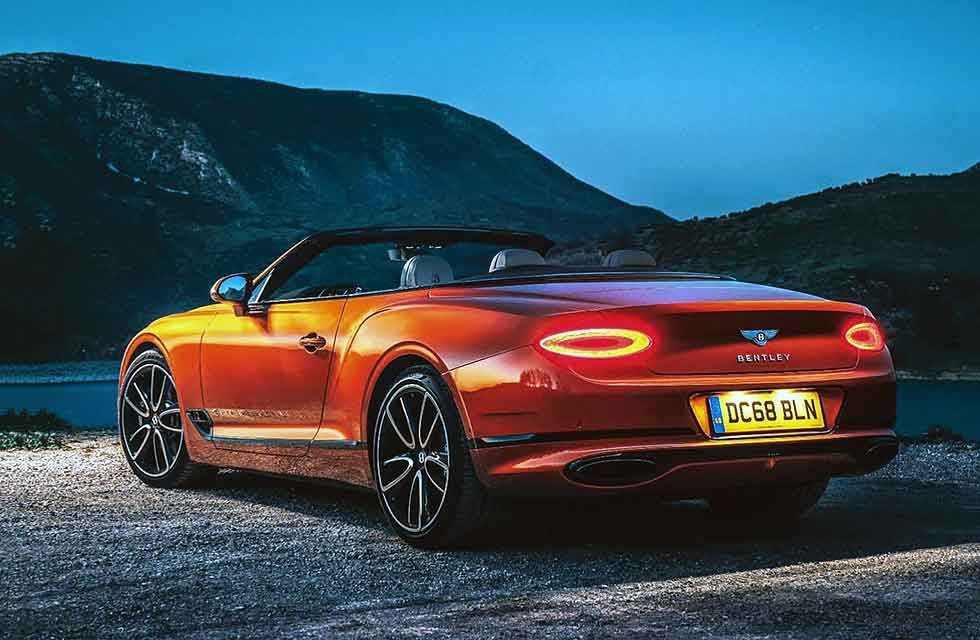 The last hurrah Bentley Continental GT Convertible. Cars as decadent and indulgent as W12 Bentley convertibles can’t last, making the new third-gen Conti GTC surely the last of its kind. If so, it’s quite a sign-off.

If you were to propose the automobile today – a selfish, potentially lethal machine capable of distilling speed from old plants, and to be enjoyed with complete autonomy wherever and whenever you wished – you would, quite rightly, be locked up.

But were you somehow able, as part of your pitch, to take doubters up the road in the new Bentley Continental Convertible, you’d prompt not screams of terror as their established physical truths – horses are fast, heavy things are slow and travel is intrinsically tiring – were turned neatly on their head, but a profound sadness. Eventually you’d stop, they’d step out and, knowing they’d never experience anything like it ever again, they’d wander off to start the rest of their now somehow paler, emptier life. For while almost any modern car is a minor miracle, the new third-generation drop-top Conti is remarkable for its mastery over physics and its curmudgeonly rules.

Climbing quickly and effortlessly inland from the Mediterranean coast, melancholy threatens as you ponder the truth that this Continental is surely the last of its kind: a decadent and profoundly 20th-century car in concept if not in execution. While not as overtly hybrid-ready as the new Porsche 911, whose transmission and electrical architecture sit ready to take an electric motor, this third-generation Conti will be electrified before it gives way to its successor.

And then what? Another Conti with nothing to power it but a 6.0-litre W12 in its nose? Unlikely. It’s a curious engine, the W12, with neither the analogue ferocity of a big, turbo-free V12 nor the bear-hug charm of big-capacity V8. Plenty of Bentley owners prefer the more honest charms of the eight that’ll inevitably make its way into this car, and I can empathise. But while it never sounds as special as you hope it will, the W12 is special: demure, cultured and almost silent under low load, but able to summon at will a clinical and scarcely believable turn of speed the moment you need it. Or just want it.

As the climb gets interesting, the road hunting left and right as it gains height, the unforgiving gradient inevitably starts to slow trucks and less special cars. By contrast the Bentley seems blissfully unaware. Direct- and port-injected and with twin-scroll turbos, there’s no delay, no moment in which the thing gathers its thoughts: brain, throttle, three-car overtake – done.

But while the W12 fully extended, its might shrinking distances and pulling distant places near, is deeply impressive, with time it is its flexibility and effortless speed that starts to build a bond. Stop flicking between the impressively smooth and sharp twin-clutch ’box’s third, fourth and fifth gears and work the engine’s revrange instead; effectively 6000rpm, given peak torque arrives at 1350rpm. Now you appreciate a couple of things: that you’re barely covering ground any less quickly; that doing the same with the chassis (guiding it with a little in reserve rather than flinging it) feels right; and that, fittingly, the internal combustion engine has never felt more wondrous than now, as it plays its last innings. Consumption of 18mpg (20.2mpg officially) is the tax you pay on that sense of awe, but what price 0-62mph in 3.8sec, 207mph and being able to fly without leaving the ground?

That rhythm, the one that comes with holding gears and cornering with grace, comes quickly in the Convertible because it’s a car able to mould your mood like few I’ve driven. The interior – as befits a £175,890 luxury car in the first days of its life – is gorgeous. It’s a lovingly wrought space in which the stuff you need – good driving position, clear information, some isolation from the world speeding by beneath you – is there together with reams of the stuff you don’t need but that delights nonetheless. Stuff like the Rotating Display (a £4700 option) and the very Bentley moment of drama as it swaps touchscreen for expanse of flawless veneer, the tactile and flawless stitching around the inside of the steering wheel, and the spectacular glow the Koa veneer takes on as the late-afternoon Spanish sun pours in and sets the timber’s deeply lacquered lustre momentarily ablaze.

If that last point is about the car and the weather, it is one of hundreds that punctuate every drive in the Continental Convertible. (And that make its on-paper compromises palatable, notably a 170kg weight penalty over the Coupe, a boot tragically almost half as useful – 235 litres versus 358 in the Coupe – and a £16,790 premium). With nothing above your head but sky, in pours the world: the sun’s warmth as it breaks through the clouds, the smell before rain, the chill as you cross from dry tarmac to wet. But just as it re-works physics in your favour, so the Bentley only lets in the world’s good bits. There is no buffeting, conversation is easy beyond the legal speed limit and, in concert, the air scarf heated seats and heated steering wheel are able to rob even a European February of its chill.

And when you’re left with no option but to raise the roof, the 30mph cut-off means you can often do it without stopping, even if the 19 seconds the Z-fold roof takes to deploy feels like an age. Once up, though, the car’s no less comely inside and perhaps even cosier than the hardtop, much as a storm watched from a tent feels more special than one watched from a window.

We’ve one last cascading run of curves ahead, the road weaving like a lost river between hillsides left skeletal and blackened by wildfire. The third-gen Conti’s more capable chassis has already proved itself in the Coupe, and the Convertible’s an equally giant leap over its forebear. The body is five per cent stiffer and a full 20 per cent lighter than before, and the longer wheelbase benefits both driving dynamics and the elegant proportions of design director Stefan Sielaff’s quietly beautiful form. The car also deploys everything in Bentley’s dynamic arsenal; a torque-splitting centre diff and all-wheel drive, torque vectoring by brake, air suspension, 48-volt anti-roll control and the biggest iron brakes currently on sale.

Ride quality is sublime. The air suspension’s bigger chambers, together with the forgiving damping rates the active anti-roll allows the Conti to run, mean even rough roads are smothered in every mode bar Sport, with only the most brutal of irregularities shaking the structure and prompting a tell-tale wobble of the head-up display. At the same time the Bentley is more than happy to get a move on, its keen nose, fluid and unflappable responses and surreally good body control adding up to serious corner speed without a shred of uncertainty or risk. The set-up’s so friendly and the odds so stacked in your favour you’d have to do an awful lot wrong to get into trouble. Sure, a Porsche 911 will stop, turn and go with more alacrity and as a result of a more honest, more nuanced and ultimately more satisfying conversation between you and the car, but that’s hardly the point.

The point is the Bentley doesn’t endure such roads but savours them, while remaining a long-distance machine of almost peerless ability and extraordinary charm.

First verdict While compromised by its roof, the GTC is hugely capable – the fine fundamentals of the Coupe layered with still greater desirability.

Folding soft-top savages the boot space and adds weight. Do you care? No, you don’t.

2 minutes Marvel at the ambience, then drop the roof and wonder why it takes so long

10 minutes Firmly in the background thus far, you finally uncork the W12… oof!

MINUS – Horrifically compromised boot, slow soft-top W12 not as instantly lovable as a V8 but there is magic here.