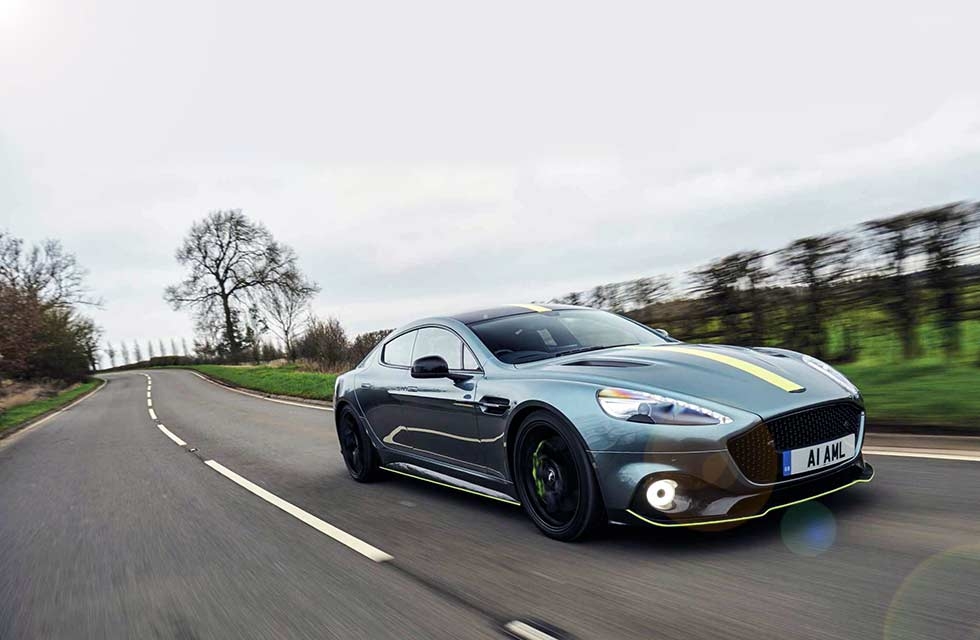 Rapide Response. First the DB11 got the AMR treatment, now Aston’s four-door has re-emerged after a similar dynamic makeover. Is it enough to keep it competitive as it enters the run-up to retirement? Words Stuart Gallagher. Photography by Aston Martin and Aston Parrott.

This is it then, the last Rapide, the last of the ‘VH’ family of Aston Martins and the last series-production Aston to be powered by a naturally aspirated engine. We shouldn’t mourn its imminent passing though, rather its very existence should be celebrated, its legacy secured and every cubic centimetre of its 5.9-litre V12 enjoyed for one final time. Which is exactly what Aston Martin intends, with this end-of-days, limited-run Rapide AMR.

AMR’s deft touch has been applied here with the same precision as it was to the DB11 AMR, with detailed enhancements across the board rather than any radical wholesale changes. A similar approach has been taken with the forthcoming AMR Vantage, too. So Marek Reichman’s four-door design (the lime green stripes are optional, many of you will be pleased to know) now includes a carbonfibre bonnet with additional cooling vents, plus new carbon front spoiler, rear diffuser, deeper side sills and lip spoiler for the bootlid (all designed to reduce lift). And underneath is a chassis subtly tuned to include additional layers of firmness, thanks to a recalibration of the three-stage adaptive damping, a 10mm reduction in ride height and an increase in body stiffness.

Added firmness sounds slightly ominous for a car that has always been underpinned by a chassis of sublime suppleness. With other manufacturers, even with the odd Aston or two over the years, it would be real cause for concern: today’s fixation with ever-quicker lap times has resulted in ever-stiffer ride quality, ruining many a great car along the way.

But the Rapide has always been a jewel in Aston’s chassis crown, the combination of its long wheelbase and aluminium architecture providing it with the foundations to be one of the most finely balanced and sweetest handling VH cars of all. What the AMR revisions aim to do is to build on those traits. And while an imperfection or two from the road surface now makes its way back to the driver, it’s no more wearing nor distracting than in the regular Rapide S, more a polite notice that the AMR has a more athletic approach to ride control.

The cabin has a distinctly sporting ambience, with sculpted sports seats front and rear, and acres of carbonfibre and Alcantara. It’s very much old-generation Aston though, which is good and bad. Sadly the infotainment system has been left untouched; more appealing are the analogue dials with their reverse sweep needles. A TFT screen isn’t always the answer.

Slot the key into its home between the push-button gear selectors, then push a little harder. Your ears catch the sound of the starter motor engaging, and an instant later the result of its activation strikes you: a wall of noise punching you square in the chest. This Rapide might have retained much of the original’s luxury remit, but as the V12 makes itself heard there is no doubt as to the AMR’s more focused intentions.

Much of the acoustic increase is down to the fitment of larger inlet manifolds and dual, tuned-length inlet runners from the brilliant – and extremely vocal – Vanquish S. They improve airflow into the engine, while a new quad-exit exhaust system improves the flow out of it, as well as enhancing the vocals. Along with a remap, it all helps the AMR to make an extra 43bhp over the Rapide S, produced 500rpm higher, at a heady 7000rpm. On part-throttle it teases you, encourages you to add another 1000rpm before using the paddles to change gear on the eight-speed Touchtronic II gearbox.

And you will want to use the paddles because it adds a further layer of interaction with this fabulous engine. Then it asks if you really want this, if you really want every last 595bhp and 456lb ft. And of course you do. You’re in a V12 Aston that’s been fettled by the company’s finest, why wouldn’t you? Because an unleashed AMR Rapide isn’t to be taken lightly.

By today’s standards a 4.2-second zero to sixty time is only so-so, though the 205mph top speed is impressive in anyone’s book, but this isn’t a car that’s defined by its performance figures. That said, drivers who have become accustomed to turbocharged torque will be taken aback, because this is performance from a different era: ballistic, brilliant, bonkers and very much from the old school.

Your throttle inputs need to be measured and considered, the V12 reacting to the slightest instruction within an instant, the revs rising considerably higher than a big V12 has any right to do. Gearshifts aren’t the quickest, but they suit both the nature of the car and the engine’s power delivery impeccably and that’s how the whole car feels: impeccably well-sorted.

Across smaller, challenging roads, the body control feels imperious, the damping brilliantly adept at managing both the surface below and the Rapide’s near-2000kg kerb weight. Combined with steering that communicates in clear, precise tones and standard-fit carbon- ceramic brakes with 400mm diameter front discs that barely seem to break sweat, piloting a Rapide AMR becomes a test of restraint. The way it deals with rapid direction changes is just sensational. Now, more than ever, the Rapide is Aston’s four-door sports car.

It’s never been a huge seller, but when it is replaced next year by the four-wheel-drive DBX SUV, we’ll be right to mourn the loss of the Rapide from Aston Martin’s line-up, and not just because it’s the last of the naturally aspirated V12s (Valkyrie excepted). When it arrived in 2009 we didn’t really understand it, why Aston Martin was producing it and what it really stood for. Today, as the final 210 examples are being produced in AMR form, we can say that the Rapide will bow out as one of Aston Martin’s finest achievements.

Below: Rapide AMR is first production Aston to be fitted with 21in wheels, and the view through the spokes is equally impressive, with giant carbon-ceramic discs as standard, gripped by six-pot calipers at the front, four-pots at the rear. Car rides 10mm lower than Rapide S, to the benefit of both looks and handling.

Above and left: Rapide AMR is little-changed from the concept shown in 2017: front grille similar to track-only Vantage AMR Pro, daytime running lights recall recent Zagato models, aero additions designed to reduce lift. Stripes (inside and out) are optional.