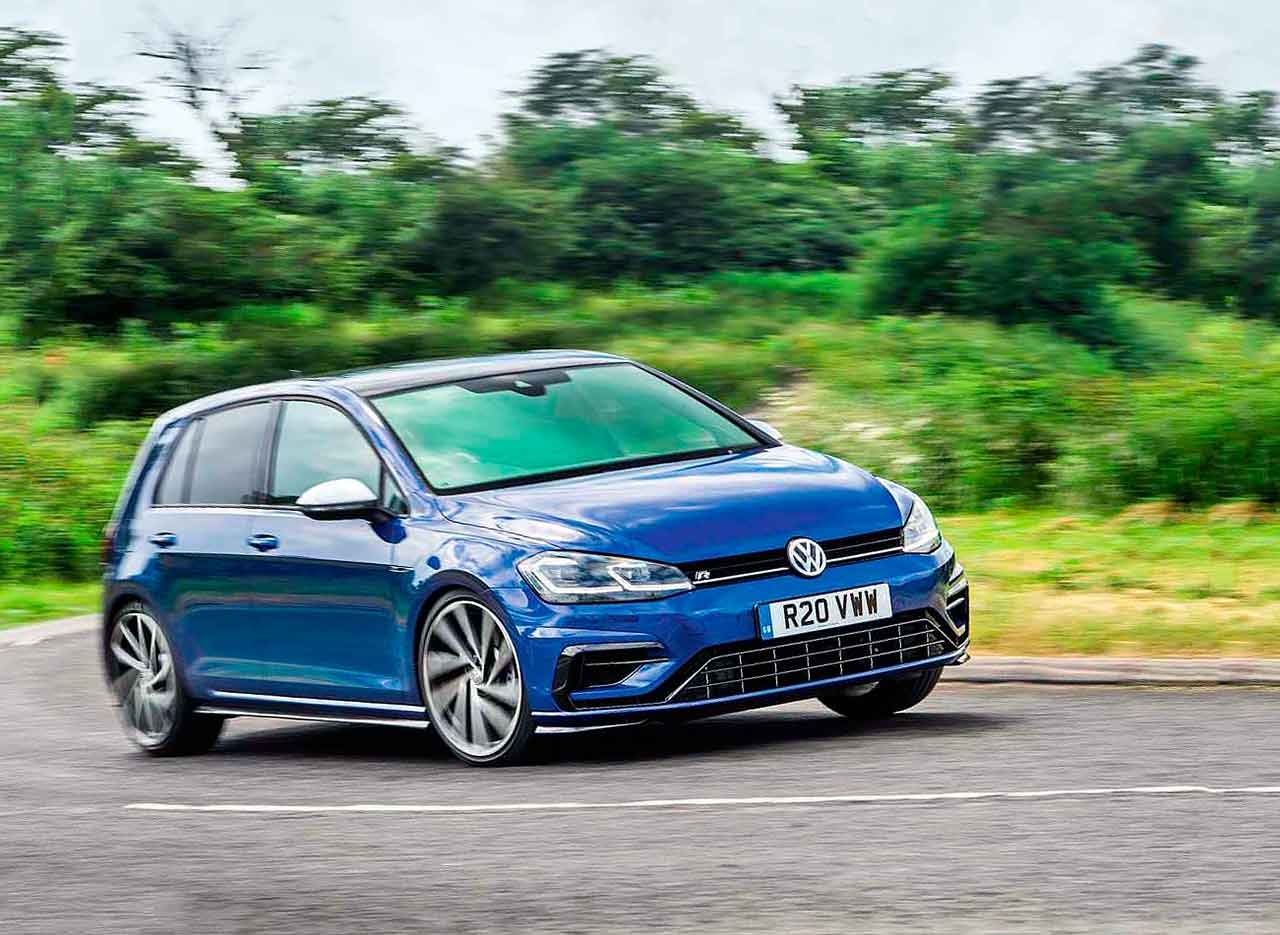 The first thing you need to understand about the Golf R Performance Pack is that it doesn’t have any extra, erm, performance – at least not in the traditional sense. Unlike the GTI Performance models, the R’s turbocharged 2-litre engine remains untouched, so it has the same 306bhp and 295lb ft power and torque figures as the standard car. There’s also the same fast-acting 4Motion four-wheel-drive system and recently introduced seven-speed DSG gearbox (the Performance Pack isn’t available with the six-speed manual).

So, what do you get over the standard car? Well, Volkswagen claims the Performance Pack is aimed at owners who are likely to take their Golf on track, so the biggest upgrade is to the brakes, which now get slightly larger and cross-drilled front discs that, for the avoidance of doubt, are clamped by silver-finished calipers. Around 2kg lighter than the standard car’s stoppers, this set-up is claimed to improve both stamina and pedal feel.

Other changes run to new 19-inch alloy wheels and a tailgate spoiler that features a gloss black lip that adds 20kg of downforce at very high speeds. This brings us neatly to the final tweak, which is the removal of the car’s speed limiter, resulting in an all-out figure of 166mph (or 168mph on the slightly more aero-efficient estate). And the cost for this little lot? A not inconsiderable £2300.

The price of our test car is further inflated by the addition of the new £2975 titanium Akrapovic exhaust, which can be ordered as an option on both standard and Performance Pack versions of the R – although only on the hatchback – and saves 7kg of mass over the standard unit. Thumb the starter button and thus equipped the R certainly sounds like a more serious piece of kit. There’s a bassier burble from the tailpipes at idle and an angrier rasp as you pile on the revs, particularly when you’re in Dynamic mode, when the valves are fully opened and the VW’s aural potential is uncorked. You also get an even noisier ‘braap’ upon full-bore upshifts. Yet it still sounds, well, like a Golf R. Just a bit louder.

There’s a similarly subtle improvement in the brakes, which bite with a smidge more progression and stand up to repeated stops with a fraction more fortitude, but we’re talking small degrees here. On track it could be a different story, but you’d be hard-pressed to spot the difference in day-to-day use.

The same goes for the rest of the car, which drives pretty much as you’d expect. That’s no bad thing, mind, because from point to point across typically give-and-take British B-roads (and in typically unpredictable British weather) the superheated Volkswagen hatch is virtually unrivalled for pace. Plus, when you’re not driving like your hair is on fire, it’s as easy to live with as a 1.6 TDI SE.

The engine punches hard from around 2000rpm and spins merrily to the red line, while the DSG ’box fires home blink-and-you’ll-miss- them shifts (0-62mph can be dusted off in a launch-control-assisted 4.6 seconds). As before, the steering is well weighted and accurate, while body control is impeccable, particularly with the £850 adaptive dampers in their firmest setting.

And while the R has a limpet-like grip on the tarmac there’s also some adjustability, the strong turn-in allowing you to subtly rotate the rear on the entry to a bend and then exploit the four-wheel drive’s eagerness to shuffle torque rearwards to catapult the car out of the corner with a deliciously neutral stance.

It’s a top hot hatch, the Golf R Performance Pack, but it doesn’t really add a great deal to the already towering abilities of the standard R, particularly when you take into account the hefty price premium. The Akrapovic exhaust adds a little more aural drama, but again you have to pay dearly for the limited benefit.

So unless you need the bar-room bragging rights of having the priciest and theoretically fastest Golf, we’d recommend keeping to standard with the R.