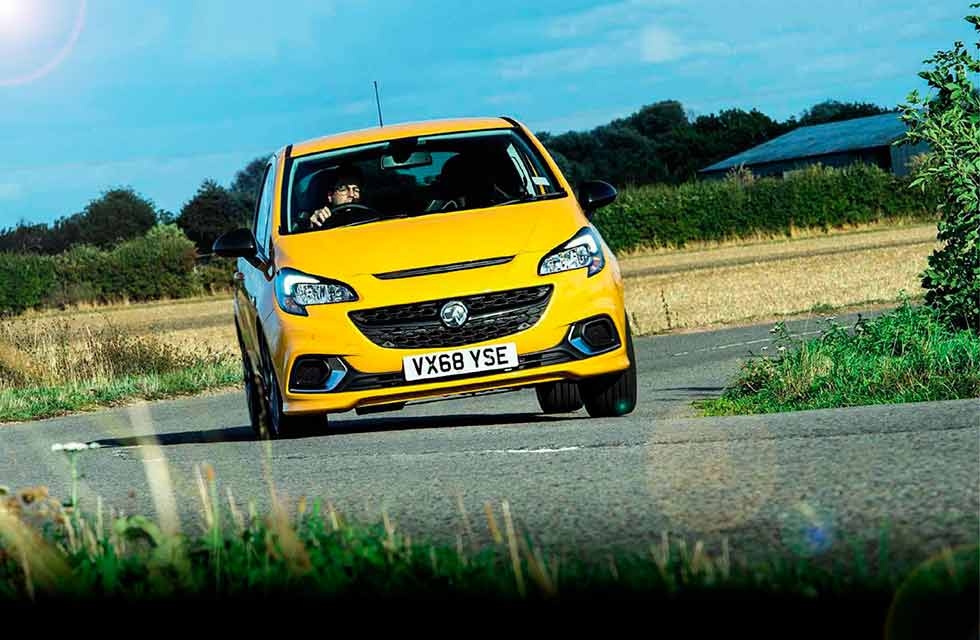 You’d be forgiven for thinking that Vauxhall had given up on the whole high-performance thing. With the VXR brand seemingly moribund and the supply of rear-drive Holdens for rebadging cut off permanently, the list of cars from Luton worth the consideration of people like us is depressingly short. Yes, there’s the Insignia GSi (Driven Too), but quick and composed though it is, it’s more mildly racy repmobile than it is serious sports saloon; a car that looks and feels only marginally more exciting than the standard version, which is to say not very.

So the omens aren’t good for the new Corsa GSi, which aims to fill a much-needed hot hatch hole in Vauxhall’s price lists. The good news is that it borrows heavily from the old Corsa VXR, including much of that car’s suspension set-up and its aggressive visuals. The bad news is that the VXR was hardly youthful when it died, being based on the firm’s archaic (and heavy) SCCS platform, the exact age of which can only be determined by carbon dating. Oh, and whereas the VXR had a fairly fiery 202bhp turbocharged 1.6-litre engine to play with, the GSi has a more modest 148bhp 1.4.

Still, it looks the part. At a glance you’d struggle to tell it apart from the more powerful machine, because there’s the same deep front bumper, side skirts and prominent rear spoiler. Only the deletion of the VXR’s trapezoidal centre-exit exhaust – replaced by a more modest single pipe that pokes out from underneath the bumper – marks this out as the more tepid version.

Inside it’s business as usual, with the Corsa’s tightly built and decently finished cabin enhanced by the fitment of a chunky three-spoke steering wheel and some natty metal-trimmed pedals. Excellent leather-trimmed Recaro seats remain an option, and there’s still a square-edged, roughly stitched knob for the gearlever, which is uncomfortable to hold as it looks.

The GSi’s turbocharged four-cylinder will be familiar to owners of Astras and Insignias, and in this application it delivers an under par 148bhp at 5000rpm. On the plus side, there’s a healthy 162lb ft of torque in a plateau from 2750rpm to 4500rpm (although that’s still 44lb ft down on the VXR).

Despite the promising torque output, the GSi feels a little flaccid at low revs, a feeling no doubt exaggerated by the car’s 1278kg kerb weight. Vauxhall claims the six-speed gearbox is packed with closely stacked ratios, for keener performance. That’s as may be, but a sixth gear that’s turning around 28mph per thousand rpm suggests the transmission has been tuned for efficiency and lower emissions rather than performance.

It’s only beyond 4000rpm or so that the engine starts to feel like it belongs in a warm hatch, pulling with greater gusto and accompanied by a pleasingly growly exhaust note. So to get the most out of the GSi you need to make plenty of use of that six-speed manual, which is a bit of a mixed bag. The shift action is light and precise enough, but the awkwardly shaped lever and springy clutch action can be a pain, particularly when mooching around town.

Also irritating is the ride. At low speed the GSi hops and jiggles down the road, the springs and dampers barely bothering to react to surface imperfections. Up the pace a little and get some load through the suspension and matters improve, the Corsa attempting to absorb bumps rather than being deflected by them. It’s still far from perfect, mind, with potholes and expansion joints being dealt with so violently that you wince – and occasionally even shout out in shock.

The upshot of the rigid suspension is that the GSi corners fast and flat, particularly when the road is smooth. There’s bags of grip too, and the car takes a satisfying four-square stance through bends as the front and rear axles take up their share of the efforts.

Factor in the quick steering and strong turn-in bite and the Vauxhall is a surprisingly agile and quick-witted little device through a series of corners. So it’s a shame that the electrically assisted steering is so light and devoid of feel, making it near impossible to judge just how much grip you’ve got to play with. Another frustration is the brakes, which suffer from an overservoed pedal action, making it difficult to slow smoothly and progressively, the level of retardation rarely matching your effort at the pedal.

Yet it’s not the rigid ride, the snatchy brakes and the lifeless steering that derails the Corsa GSi’s bid for your attention. No, it’s the hefty £18,995 price tag (and that’s before you’ve added the £1900 GSi Plus Pack that brings 18-inch diamond-cut alloys, bi-xenon headlamps and those Recaros). Because for £250 more than the Vauxhall’s base price you can have a 197bhp Ford Fiesta ST, a rival that is in a different league. Nuff said.

Above and above left: styling is carried over from the Corsa VXR, as are the leather Recaros (top left), although you’ll pay extra for those.

–   Older than time itself – and feels it