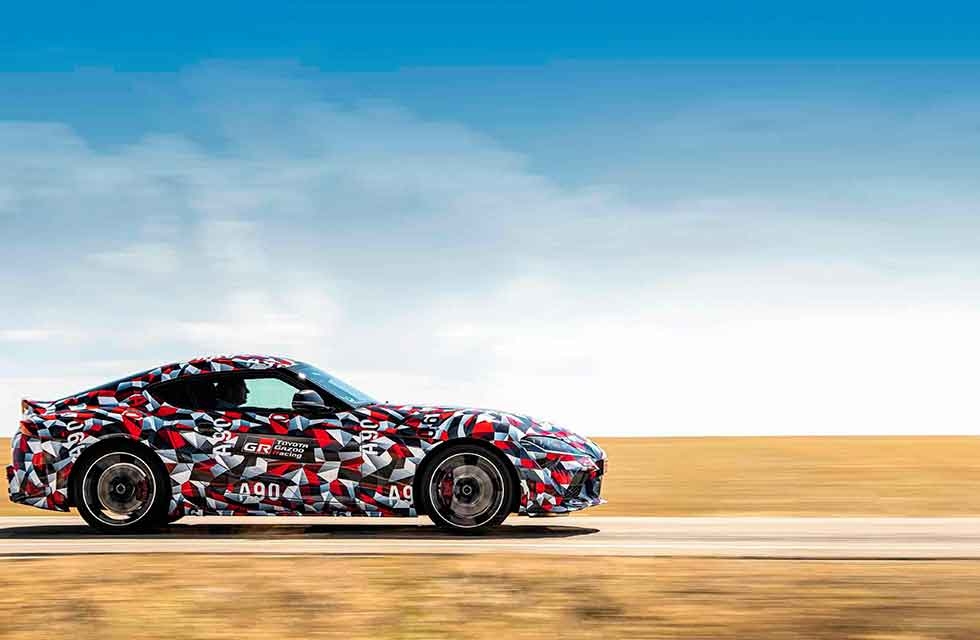 It’s still a few months away from its world debut, but that hasn’t stopped us from taking the opportunity to drive a prototype of Toyota’s all-new Supra. Toyota is reviving the long-dormant Supra badge in a joint project with BMW – and the resulting focused sports coupe has big names in its sights. Words and photos by Stuart Gallagher.

TOYOTA SUPRA A90 – THE PORSCHE ASSASSIN

‘THE SPEC IS TAKEN UNEDITED FROM THE SPORTS CAR RULE BOOK’

Alpine A110. BMW M2. Porsche Cayman GTS. Audi TT RS. Ford Mustang GT V8. Sounds like an Drive-My Supertest in the planning (with fewer mugs of tea and packets of Hobnobs). But it is also the list of rivals that Gazoo Racing assembled for its engineers and development teams to test, experience, pull apart and benchmark when it was instructed by Toyota to develop the company’s first volume performance model since the GT86 arrived in 2012 – and its first Supra since 2002. There is as much anticipation within Toyota for this car as there is amongst the enthusiasts who have been waiting 16 years for a replacement to the iconic A80 and the three generations of Supra that came before that.

Those hardcore enthusiasts who worship all things Supra – and those of us who can’t believe their luck that the world’s biggest car manufacturer has deviated from its hybrid-heavy product plan to focus on a sports coupe – have a little while longer to wait for the production A90 to arrive. The covers won’t slide off and reveal the Supra’s curves until January 2019 at the Detroit motor show, but here in the late summer heat of Madrid, Toyota has assembled four pre-production prototypes for us to try on road and around the recently refurbished Jarama circuit. In all we’ll have 90 minutes on road and a third of that time again on track. Before this, however, we’ll have an evening with Tetsuya Tada, chief engineer for the Supra project.

You’d like Tada-san. Despite his diminutive stature his personality fills every room he enters, including tonight’s, which is an open-air terrace. His measured responses to every question couldn’t be further from the corporate speak so many in this industry train night and day to perfect; you can tell that Tada-san doesn’t enjoy the sickly taste of sugar-coated answers. Respectful and nothing but professional, you let your baked cod go cold to talk – and listen – to Tada-san.

On tonight’s evidence the Toyota Supra project has been not so much a challenge as a learning curve for a company that confidently goes toe-to-toe with Volkswagen and Ford for global sales domination. The Supra project is a joint venture with BMW, but rather than co-develop a single car that both companies can apply their own badges to – as per the Subaru BRZ/Toyota GT86 tie-up – with this venture both sets of engineers first discussed the kind of cars they each wanted to build. Then instead of trying to create a Frankenstein mix of multiple ideas and requirements, they worked together to see which parts could be shared that would allow each team to create the individual cars they desired. It resulted in two cars with just six shared components: engine, gearbox and diff, door mirrors and a few interior pieces.

‘We started by asking what we wanted to make – without compromise but with a relationship BMW and Toyota can both benefit from,’ explains Tada-san. ‘We both wanted to make a sports car, but not the same car. ‘We [Toyota] have always wanted to make a pure sports car from the project. I said, “Let’s make a Porsche.” BMW laughed in my face! “If you like Porsche that much, buy one for yourself.’”

You get a sense this only spurred on Tada-san and his Gazoo team to actually build a Porsche rival. ‘Initially BMW told us the Z4’s balance would be between performance and luxury, but a year ago BMW started to say, “We’re going to make a Boxster-killer, too.” I hope they do.’ Toyota and BMW have developed their cars in isolation from each other.

What Tada-san and his team have built is a car that should strike a chord with every Drive-My reader and appeal to the Supra die-hard fan base. Its specification, from what Toyota will divulge at this time, is taken unedited from the sports car rulebook. Front-mid -engined, rear-wheel drive, 50:50 weight distribution and the driver at the heart of everything the car does. ‘The nature of a sports car is that every owner is different,’ says Tada-san. ‘Ask 100 sports car owners what they want from their next sports car and you will get 100 different answers.

‘And you can’t make a sports car if you listen to the criticism from directors when they hear what you are doing! I got told off a few times with this car… But if you listen to owners you will also get a mediocre car. So I came to the conclusion that I will make the Supra that I want.’

This bullishness is backed up, on paper at least, with a car that has been fastidiously developed. Along with the perfect distribution of the anticipated sub- 1500kg kerb weight and the positioning of the B58 BMW straight-six (as found in the 340/440i) as far back in the engine bay as possible, Gazoo’s focus also honed in on reaching a perfect wheelbase-length to track-width ratio. Not only to provide the car with a foursquare stance on the road, but also to maximise chassis stiffness and optimise the weight distribution.

On the subject of stiffness, the Supra is more rigid than the Lexus LFA supercar, a model that’s a carbon and composite masterpiece where the Supra is a steel and aluminium miracle. ‘For the Supra, composites would make the car very expensive for the customer who will buy it. And to have achieved the same level of stiffness as the LFA with a car made from a steel and aluminium structure is a big achievement,’ explains Tada-san. That the Supra will be a fully-fledged GTE race car also played a factor in the car’s material make-up, with one eye on running and repair costs for privateer teams who will contest the car.

Motorsport has played a role in how the Supra looks, too. Beneath the light disguises wrapped over the prototypes’ bodies are flowing surfaces, faux air intakes, aero flicks and a rear diffuser and high-intensity rain light set-up straight off a WEC grid. The double-domed roof will be worth the entry fee alone for some – around £50,000 is the expected price point when the Supra goes on sale summer 2019.

Beneath that body are a set of adaptive dampers (final specs have yet to be confirmed, but passive dampers are expected to be standard), an electronically controlled limited-slip differential and Brembo brakes. The 19-inch wheels of the prototypes wear Michelin Super Sport tyres – 255/35 on the front, 275/35 at the rear. There are also three driver modes to switch between: Normal, Sport and Sport+, each altering the throttle map, steering weight and damper firmness.

Sheets of black material cover the interior, but a BMW gear selector pokes out from the transmission tunnel, which itself also features BMW switches for the driver modes, stop/start system and the electronic handbrake, and a rotary dial for the multimedia system. The steering wheel, its stalks and the seats are BMW-sourced too, but the instrumentation is Toyota’s own TFT design. Personally I can’t set the seat low enough (I’m 5ft 9in), although the rising prow of the Supra’s bonnet-line, a high waistline, shallow windows and the tall transmission tunnel do help ‘lower’ you within the cockpit. Even so, a further 10mm drop in seat height would be welcome.

Legs out straight, steering wheel pulled in to your chest, backside over the rear axle; ergonomically this is pure sports car. Glance to your left: there’s less space in the passenger’s area because Gazoo didn’t want to compromise the driving environment.

If you’re expecting Jaguar F-type theatrics from the Supra’s straight-six on start-up you’ll be disappointed. It has a cultured tone that gently vibrates your eardrums at idle, with an accompanying woofle from the exhaust an octave or two higher than an M2 and the same measurement again lower than a 240i. Toyota hasn’t touched the hardware of the B58; instead it has spent an incredible amount of time and miles nailing the electronics and mapping the ECU to suit its needs. Expect around 330bhp.

A similar amount of time has been spent on the chassis and it shows within 20 seconds of selecting Drive and rolling out into Madrid’s rush hour. The control weights, how every reaction from the car feels so natural that you don’t give it a second thought – nothing fights for your attention or distracts you. Get in, start the engine and drive. Enjoy.

And you will. The Supra cruises with a GT-like finesse. It’s smooth, refined and quiet; instantly it’s clear that it can fulfil the role of one-car-for-all-occasions for drivers who don’t have the means or room for a fleet of toys.

Knocking the dampers up to Sport when we’re off the motorway, these prototype Supras show no signs of harshness. There’s enough roll in the chassis for you to lean against, the nose pitches a degree or two under braking and the steering is beautifully linear. The Supra doesn’t feel as light on its tyres as a GT86, but its chassis is more sophisticated. You apply the lock in a single movement, and what’s lacking in feel is made up for in accuracy and rate of response. And no matter how ambitious you are with your entry speed, the front tyres pick up the line with no need for constant steering corrections to encourage those Michelins to stick.

The Supra delivers on track, too. Along Jarama’s long straight it gathers speed with Cayman GTS athleticism – expect a 4.0sec 0-62mph time and 165mph flat-out. Under braking it resists squirm and the brakes can be modulated with consistency deep into the apex. Then there is the balance, the way it inspires so much confidence through directional changes at speed and feels as planted through the long, fourth-gear right-hander onto the start/finish straight as it does through the tighter, second-gear stuff. For this we can thank the Supra’s low centre of gravity (lower than a GT86) and anti-roll bars designed specifically to reduce high-speed understeer. It feels as agile as Alpine’s A110 and as precise as Porsche’s Cayman. It looks like Toyota has hit the bullseye.

Below right: roof is a ‘double bubble’ hard-top, not a folding soft-top like on its BMW Z4 sister; the Supra is also designed to go racing, so performed well on the track at Jarama.

Bottom left: the ‘A90’ in the prototype’s camo pattern refers to the model’s internal designation at Toyota; car’s centre of gravity is lower than a GT86’s.