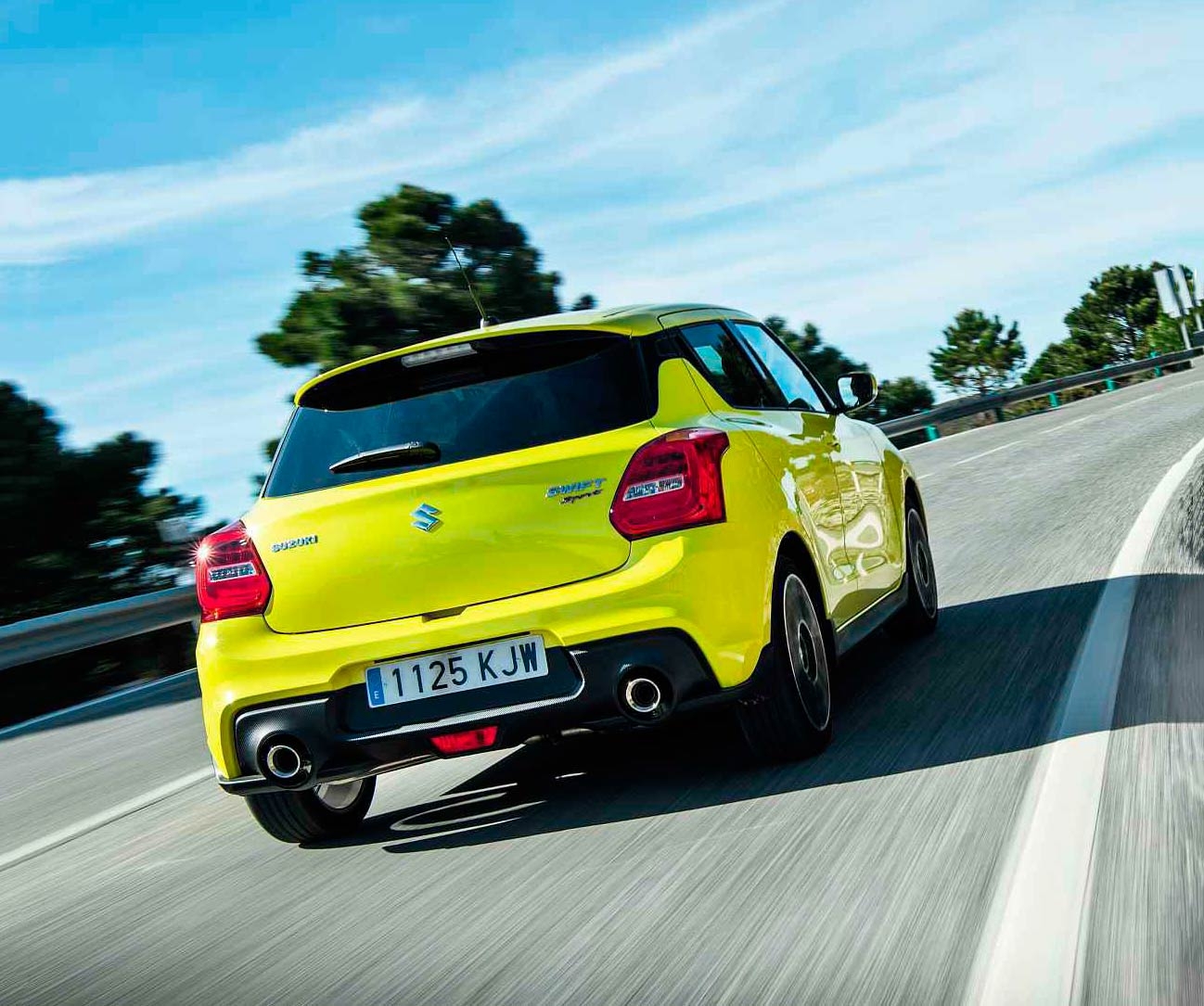 2019 Suzuki Swift Sport Now below a ton, and with turbo power, does the third-generation Swift Sport still captivate?

Cliché alert, but sometimes small really is beautiful – and few cars better adhere to this minimalist maxim than the Suzuki Swift Sport. Introduced in 2006, the original was an instant hit here at Drive-My, its combination of pint-sized dimensions, a voracious appetite for fun and bargain-basement price tag easily offsetting its modest straight-line pace, even if its frenzied character did result in most two-hour motorway journeys leaving you with a four-hour headache. The second-generation car arrived in 2012 and brought a welcome injection of refinement and dynamic polish, but not at the expense of the original’s infectious appetite for a good time.

So, we’re understandably excited about the all-new version. It certainly looks good on paper, its 975kg kerb weight making it a full 70kg lighter than the old car, while under the bonnet is a new downsized turbo motor that delivers greater muscle. The 1.4-litre Boosterjet unit first saw the light of day in the Vitara S SUV, but here it gets a new intercooler and turbo wastegate to deliver 138bhp at 5500rpm and 170lb ft of torque at 2500-3500rpm – the old car managed 134bhp and 118lbft. Power goes to the front wheels via the familiar six-speed manual transmission, now tweaked for greater precision and a shorter throw.

The Sport sits on a track that’s 40mm wider than the standard Swift’s, while the ride height is 15mm lower and Monroe dampers are used all round. The strut front suspension gets heavier-duty anti-roll bar mounts, plus each wheel hub and its bearings have been combined into a single unit, with a greater width between the bearings for a 15 per cent increase in camber rigidity. At the rear there’s the basic model’s torsion beam set-up but with bespoke trailing arms.

It looks pretty good in the metal, the new Swift Sport, with just enough visual aggression to mark it out from the standard car. The changes are neatly integrated and the revised front bumper and grille, side skirts and rear diffuser with dual-exit exhausts add sporting intent, while the 17-inch alloys help deliver a more muscular stance. If you want to attract even more attention, the new Championship Yellow paint option should do the trick.

Inside, you’ll find a pair of heavily bolstered front seats and a flat-bottomed steering wheel, plus a generous helping of red trim accents. There’s red paint splashed over the dials, too, which are joined by an uprated trip computer that features various boost gauges and a G-meter. There’s also a stack of kit, from a 7-inch infotainment touchscreen to radar cruise control and autonomous emergency braking. Only the cheap-feeling plastics and rubber gearlever knob let the side down.

Thumb the starter button and the turbocharged motor fires near silently into life. The exhaust is claimed to be a sports system tuned for optimum gas flow and characterful noise, but there’s precious little aural indication that this is something a bit special. It’s a theme that continues as you work the unit harder, when it sounds muted and anodyne, eliciting nothing more than a distant growl. It makes the Swift a far more hushed and capable cruiser, but surely that’s missing the point in a machine like this?

As you’d expect from a lightweight car with a torquey motor, the Swift Sport accelerates with a glorious lack of inertia. There’s almost no lag and the car responds, ahem, swiftly to the throttle, gathering speed with an impressive effortlessness. It feels fast, too, pulling strongly and uncomplainingly from as little as 1500rpm. Yet while the outright urge is strong, the new car misses the top-end vivacity of the old, naturally aspirated model, which felt a bit flaccid low down but came alive as the rev counter’s needle homed in on the 7000rpm red line. There’s more performance everywhere in the new car, but as with many forced-induction motors, there’s no real incentive to wring its neck, especially as the rev limiter kicks in abruptly at just over 6000rpm. Whereas in the old car acceleration on a twisting B-road was hard won with plenty of stirring of the gearlever, in this latest version you often never need to leave third, which is a shame because the ’box has a light and accurate throw that would encourage cogswapping when mated to a peakier motor.

As with the engine, it’s clear the Suzuki’s chassis has been tuned to deliver a more cultured and mature feel, but make no mistake, with so little mass to control and such wieldy dimensions, the Swift Sport still feels light on its feet. Down some of the tighter and twistier roads of our Spanish test route it is surprisingly compliant, the suspension soaking up the few bumps we could find with admirable suppleness. There’s some firmness in the vertical movements, but it feels plushly damped, rounding off the worst of the imperfections. Yet body movements are well checked, with only really big bumps upsetting the car’s composure – and even then it only suffers from the tiniest hint of float.

The electrically assisted steering is decently weighted and positive enough off the straight-ahead, and while the variable-ratio system doesn’t deliver the last word in feel, there’s enough communication to give a good indication of grip, plus it’s precise, allowing you to place the Swift accurately and with confidence. Turn-in bite from the 195-section Continentals is fairly tenacious, too, the Suzuki clinging on gamely when driving briskly.

However, some of the old car’s sparkle is missing. Start to push hard and the nose begins to wash wide a little as the outside-front wheel bears the brunt of the cornering forces. Lifting the throttle tucks the nose in and gets you back on line, but that’s about as throttle adjustable as the car gets. Unlike the similarly powerful Ford Fiesta ST-Line, or even the previous Swift Sport, the new car’s chassis doesn’t feel like the front and rear axles are sharing the loads equally. The whole car feels nose-led, as if it’s pivoting around a point just ahead of the gearlever rather than by your hips. Where the old car revelled in being taken by the scruff of the neck, this is a more measured machine, favouring a less energetic and engaging approach.

Still, get into a rhythm and you can cover ground at a surprising lick. The well-weighted controls, progressive brakes and perfectly placed pedals all help deliver effortless pace over switchback secondaries. And that muscular motor plays its part, too, zapping you along the straights. The Sport has the sort of slick, polished and poised demeanour of a Volkswagen GTI in this respect. Yet while it’s clearly technically more accomplished than ever before, it raises fewer smiles per mile.

The VW comparison doesn’t end with the driving experience, because at £17,999 the Swift clearly has similarly upmarket aspirations. To put that price in perspective, the only slightly slower and barely any less spacious Up GTI will set you back £14,155 in five-door form, while the 197bhp Polo GTI is £21,145 – and the old Swift Sport weighed in at £15,349 when it was pulled last year. Value is no longer one of the Suzuki’s calling cards.

Still, it’s extremely well equipped, plus it’s more spacious than before. Factor in the improved refinement and you have a much more mature proposition for daily driving duties. However, in the push for premium the Swift has lost some raw charm and appeal. It’s faster in a straight line and through corners, but the fun factor has been diminished. It’s a more accomplished machine with a broader spread of talents, but we’d happily trade some of the polish for a dash of the old car’s magic.

Top: Sport now comes only as a five-door (with ‘hidden’ rear handles), making the 70kg weight loss over the old three-door car all the more impressive. Above: lag-free turbocharged 1.4 pulls strongly from 1500rpm. Right: 17-inch wheels contribute to muscular stance.

‘While it’s more accomplished than ever, it raises fewer smiles per mile’

–  Adjustability and character of old car have been diluted; price