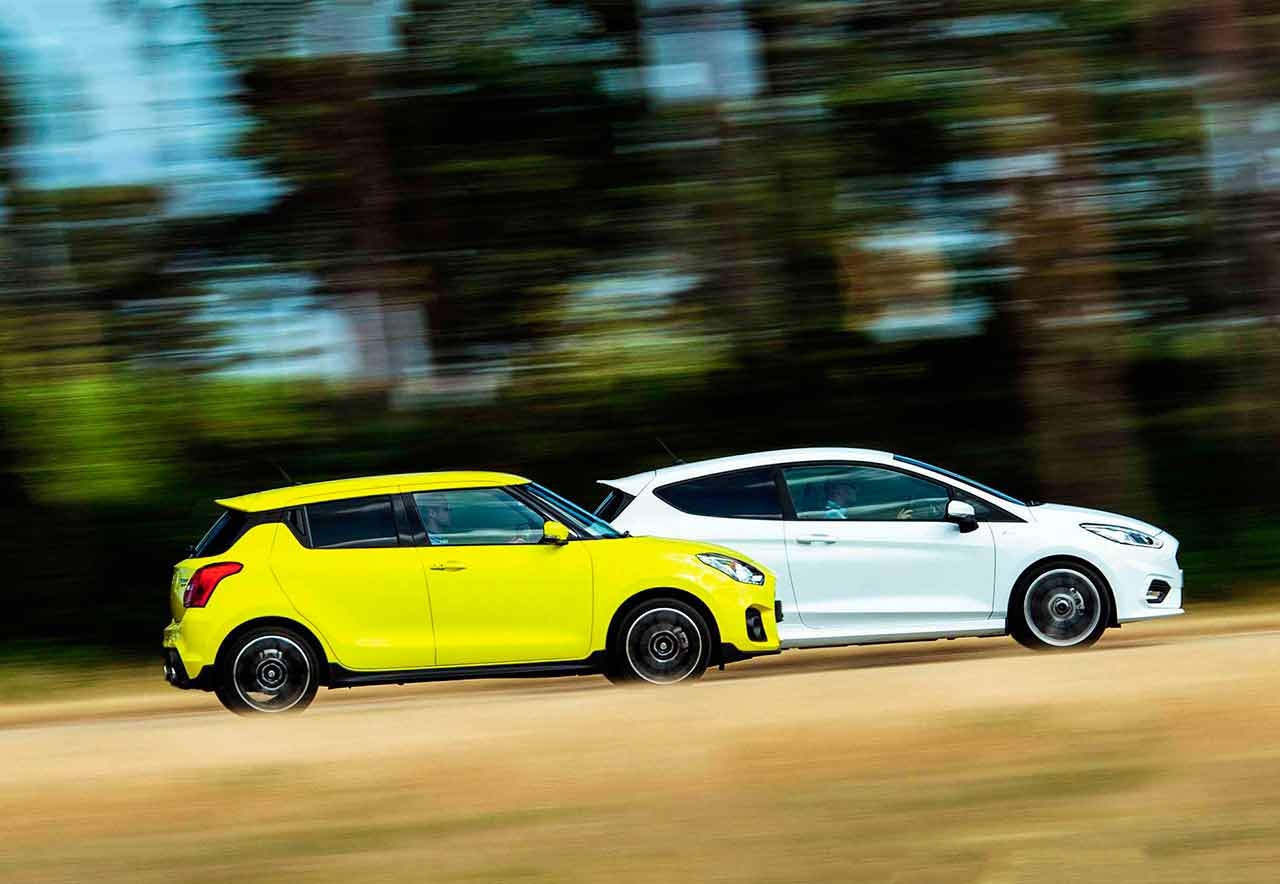 Suzuki’s Swift Sport has had a bumpy arrival in the showrooms, now it has to face up to its toughest rival: Ford’s Fiesta ST-Line. Words by James Disdale. Photography by Aston Parrott.

If There was one word that summed up our feelings after driving Suzuki’s new Swift Sport for the first time, it was ‘underwhelmed’. Yes, it was quicker, grippier and more refined than before, but it appeared that, in attempting to broaden the car’s appeal, Suzuki’s engineers had dimmed much of its predecessor’s sparkle.

That said, there was also a nagging suspicion that the Sport had been slightly overawed by the wide and fast roads at the car’s launch location – the epically quick and exquisitely surfaced routes of Andalusia in Spain are better suited to supercars than mildly spiced superminis. Perhaps the Suzuki would feel more at home on the UK’s tighter and twistier tarmac? Well, there’s only one way to find out…

To make matters even more interesting, we’ve brought along another junior hot hatch in the guise of Ford’s Fiesta ST-Line 140PS, which follows the same ‘big thrills, small bills’ formula as the Swift. Like its rival, the Ford occupies that space in the market where the pursuit of pleasure has to be balanced against price, petrol use and insurance premiums. Aimed at the young (and maybe the young at heart), these are entry-level Drive-My EN machines; cars that prove you don’t have to spend big to have a good time.

That statement is certainly true of the Suzuki, which at £16,499 (for a limited period) offers a handy £2116 saving over a five-door ST-Line (the Suzuki is only offered with five doors, but you can save £650 on the Ford by opting for three doors, as here). Yet despite the price difference, both feature 138bhp turbocharged engines, and six-speed gearboxes that drive the front wheels. How they achieve their identical outputs is quite different, though, with Suzuki favouring four cylinders and a 1.4-litre capacity, and Ford sticking with its 1-litre EcoBoost triple. These contrasting approaches are more accurately highlighted by the torque figures, with the Fiesta’s 133lb ft looking rather weak-kneed alongside the Swift’s 170lb ft.

Chassis-wise, the Suzuki gets a 40mm wider track than the standard car, plus a 15mm lower ride height, stiffer anti-roll bar mounts and bespoke Monroe dampers. The ST-Line’s makeover isn’t quite as comprehensive, with the changes limited to firmer springs and dampers, a 10mm drop in height and remapped electric power steering.

However, when we meet in the heart of Norfolk’s Thetford Forest, it’s the Ford that looks the most convincing, its ST-Line bodykit giving it the same burly appearance as the quicker and (only) £2496 more expensive ST. It’s helped by optional 18-inch alloys (£600; 17-inch rims are standard) that fill the arches nicely and create the impression that the Fiesta is up for it even before turning a wheel. By contrast, the slightly smaller Suzuki looks a daintier proposition. The startling Champion Yellow paint – a nod to the Swift’s WRC involvement in the previous decade – and the large twin exhaust exits within the ‘carbon effect’ diffuser mark it out from lesser Swifts, but it looks less serious in this company. Looks can be deceptive, though, and as we strike out cross-country for the Suffolk coast, it’s first blood to the Suzuki.

With its chunkier torque figure and significantly lower kerb weight (975kg versus the Ford’s 1144kg) the Swift simply stretches away from its rival along the straights, showing the sort of muscular elasticity that marks out the best small-car, big(ish)-engine combos. It’s not blisteringly quick, but there’s enough urge to quickly deal with dawdlers. Our timing gear will later reveal that the Suzuki zips from 0 to 60mph in just 7.6sec, while the Ford only manages a leisurely 9.2sec.

As you’d expect from a forced-induction unit, the Sport’s throttle response isn’t as sharp as you’d like, but once it takes on board your request for urgency, the four-pot spins more keenly and considerably more sweetly than the Fiesta’s three-banger. Those twin exhausts elicit a distant rasp as you wring every last revolution from the engine, too – although, curiously, the Suzuki’s rev-limiter cuts in clumsily at 6000rpm, around 500rpm before the red line. A pity, as the combination of sweet-spinning motor and snappy gearshift encourages you to keep the throttle pinned.

You do the same in the Ford but for different reasons, because to have any hope of keeping the Swift in your sights you have to rinse every last ounce of performance from the Fiesta. Lower torque figure and greater mass aside, the ST-Line’s big problem is that it’s ridiculously tall-geared, which is no doubt perfect for meeting emissions targets, but fairly hopeless for having fun. In combination with a dull throttle response and a very pronounced flywheel effect – it’s as though the crankshaft is rotating in treacle – it makes the Ford feel limp and lethargic at low revs; it only really comes on-song once you’ve wound past 4000rpm on the rev counter. Still, at least the triple sounds OK when extended, in a thrummy kind of way, while the six-speed ’box has a positive, mechanical action that has you shifting just for the hell of it.

Any disadvantage the Fiesta suffers from down the straights is easily cancelled out through the corners, where its ability to carry greater speed helps you hang on to the Suzuki’s exhausts. From the moment you turn into a bend to the instant you exit it, the Fiesta feels more engaging and agile, as if it’s channelling the spirit of its more serious ST sibling. The steering is lighter than the Suzuki’s, but it’s quicker and offers a little more feedback, plus it’s connected to front tyres that bite harder on turn-in and cling on for longer, allowing you to slice toward apexes with real confidence. As you hit the mid-corner point there’s a glorious sense of the car pivoting around its centre-line before adopting a lovely four-square stance as the rear wheels take up their share of the cornering loads. Push harder and you can feel an inside-rear wheel just lifting off the tarmac.

There’s adjustability on offer, too, with even subtle shifts on or off the throttle having an effect on the car’s attitude, allowing you to tweak your line at will. After a spell in the Fiesta, the Swift feels somewhat leaden. Yes, it’s nimble and grippy enough, but it has abandoned the old car’s rather acrobatic antics for a more secure and sober approach. The steering is much heftier than the Ford’s, which is daft when the car is so inherently light, and a slower rack means it feels lazier in its responses, forcing you to use more lock. It’s not helped by the fact the Suzuki doesn’t cling on as well as the Fiesta on turn-in, its nose washing wide sooner. Lifting the throttle gets things back on track, but there’s none of the Ford’s playfulness, just a simple tightening of the line as the front tyres regain their purchase. The body control is less impressive too, the Swift rolling a fraction more and getting a little scrappier at the limit of adhesion as the suspension just starts to struggle to contain bigger movements.

The upside is that the Sport rides with greater suppleness than the occasionally lumpy Fiesta, smothering bumps with a plushness and refinement that’s at odds with both its price and sporty intent. That said, neither car is a hassle to haul long distances in, both benefiting from impressive refinement, with wind and road noise kept in check far more effectively than you’ve any right to expect at this price point. The Fiesta’s cabin much more sophisticated in its design and is more spacious too, plus it benefits from a lower-slung driving position and a more intuitive infotainment system, but the Suzuki hits back with far more standard kit and, when you look past the cheaper plastics, tighter build quality.

It’s clear neither of these cars is perfect. The Suzuki is by far the quickest in a straight line and is far more comfortable and refined than before, but it’s simply not as much fun as its earlier incarnations. The Ford, on the other hand, is a born entertainer, the quality of its chassis shining brightly every time you pitch it into a corner – so it’s a shame its engine is so disappointing. So which of our duo wins? Well, it’s hard to ignore the Suzuki’s performance-per-pound proposition, but factor in the Fiesta’s greater appetite for fun and Ford dealers’ incurable addiction to discounting, and the ST-Line takes it by a nose.

‘FROM THE MOMENT YOU TURN IN, THE FIESTA FEELS MORE ENGAGING AND A GILE’

Left: Swift can’t carry as much speed through corners as the Fiesta. Above left: but the Suzuki has the advantage along the straights.