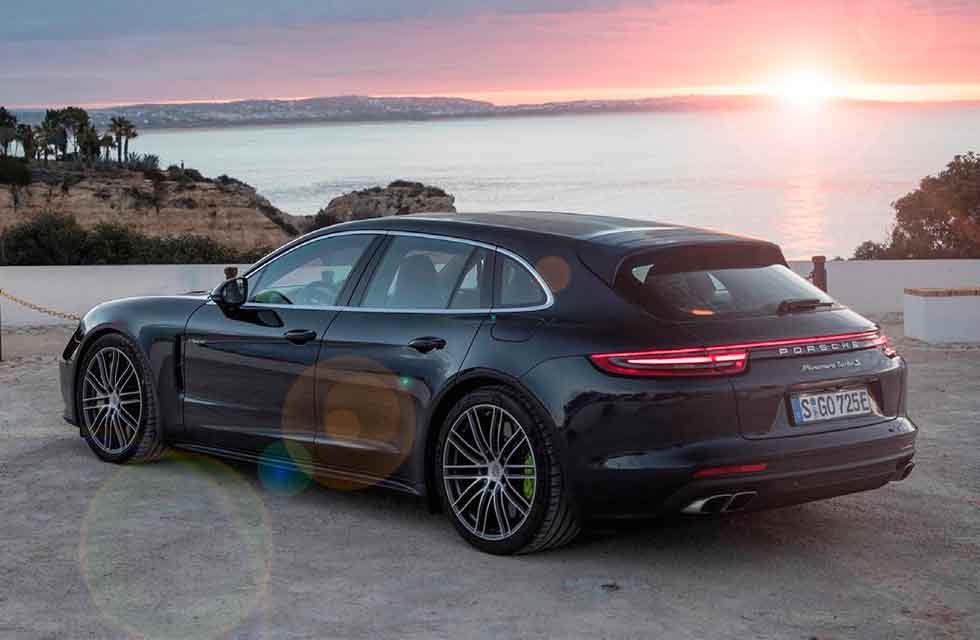 For the last 70 years, Porsche have produced some of the most iconic, sought after cars ever made. They are stylish, powerful, fast and normally, pretty expensive too. The cars that roll out of the Zuffenhausen factory in Stuttgart, Germany are renowned for their quality, reliability and longevity and enjoyed by Porschephiles the world over. In recent years, the company has joined the race to electrify and there have been hybrid variants of the Cayenne SUV for a number of years. More recently, Porsche have begun to produce hybrid versions of their luxury four door grand tourer, the Panamera and it is this model that I shall be concentrating on in this feature.

Other auto makers produce cars that can rival this car, which by the way is the Sport Turismo shooting brake version with a plug-in hybrid setup, but there is something very special about getting behind the wheel of a Porsche – the history, the racing pedigree, the quality all combine in your mind when you see one up close and ultimately when you drive it. This car’s proportions are beautifully balanced and you get four doors and a tailgate to boot. It sits quite low on those imposing 21 inch wheels and ultra low profile tyres and with that low roofline and sloping back end it looks every inch the sports grand tourer it’s designed to be. This is a big car though, long and wide, especially noticeable in narrow streets; but in its defence, it can carry four people in comfort, five at a pinch – and their luggage.

There certainly isn’t any quibble about the power of this car. Under that long sculpted bonnet lies a V6 petrol engine that with the aid of an electric motor pushes out a massive combined 460hp and an earth shattering 700Nm of torque. No wonder then that this Porsche, despite its size will rocket you to sixty miles per hour in 4.5 seconds and then keep going and going, topping out at 170mph (where speed limits allow).

The first thing to note when you climb aboard is the incredible interior. The leather upholstery, the well laid out controls and the excellent driving position all make you feel at home, ready for whatever challenges may lie ahead. You sit low, not as much as in a 911, but you can raise the height of the supportive and comfortable seat a bit. The upholstery throughout the luxurious cabin of this car is black, like the exterior, which just adds to the feel of driving a stealth car; I must say I prefer the centre console of the previous Panamera – I’m not keen on the piano black trim that is so popular in prestige cars these days, for one thing it is highly reflective on a sunny day. It’s not always easy to find buttons either, especially when on the move as they are now integrated into a touch sensitive ‘glass’ panel that surrounds the gearshift controller. However, when you’re ready, just position the settings control dial, situated on the sports steering wheel, to Hybrid and turn the start knob and all remains quiet, because only the electric motor is running. Select drive with the very comfortable gear selector, release the electric handbrake and I was off.

The steering is quite heavy but responsive and although the ride is firm it’s rarely harsh, even over low-level sleeping policemen. All is calm and quiet as you waft along and indeed I could have covered over twenty miles like this. However, I needed to hit the open road and soon discovered the other side to the Panamera E-Hybrid. I put my foot down as I joined a dual carriageway road and the power just kept on coming and it wasn’t very long before I reached the legal speed limit! Time then to set the excellent adaptive cruise control up, using the buttons on the steering wheel: set the desired speed and also the distance to the next car and everything settles down nicely. Vision all round is really good – glance in the auto dipping rear view mirror and all is clear and when you look to the sides, there is a great view of those bulging rear wheel arches.

To fully appreciate a car like the Panamera Turismo, and give it a proper test, you need to find some decent back roads. Some of the leafy A roads of Surrey were ideal and as I showed my steed some undulating bends and dips, all was as composed as you would expect of such a heavy beast, with little body roll and plenty of grip afforded by the ample rubber at each corner but it’s certainly not what you would describe as nimble or agile. Then, I wanted to see what happened when I turned that mode dial clockwise to Sport and the means of changing gear from automatic to manual with the paddle shifters behind the steering wheel. I wasn’t disappointed and when on a fairly empty road, I was able to really feel the extra surge of acceleration, shifting up and down the ‘box at the flick of one or either paddle with ease; the soundtrack is one of the best I’ve heard, gloriously goading you ever harder and producing one of those ear to ear grins that don’t diminish for days; whether on twisty A and B roads, cruising on motorways or pootling through town centres, enjoying the admiring glances from other drivers and pedestrians.

Spending time piloting the best part of £100,000 worth of thoroughbred Porsche down the Queen’s highway is definitely one of the perks of my job and if this hybrid Panamera is even a small taste of what Porsche has waiting in the wings with its fully electric cars, there are plenty more exciting rides to come. For now though the Panamera Sport Turismo is certainly one of the best ways of covering a lot of ground in a short space of time.

OPPOSITE, RIGHT & BELOW The Panamera Sport Turismo offers a more estate-like presence compared to the saloon and first-generation car; Plugged in, the Panamera takes little more than a couple of hours to charge; Sumptuous interior does away with the hundred-switches of the old car in favour of touch buttons; Plenty of rear legroom, but this is a drivers’ car; Detailed tail lamps. IMAGES FROM TOP Unlike other brands, Porsche opts for lime green/yellow accents to denote hybrid power; Under the plastic cover lurks a powerful 2.9l V6; Surprisingly spacious boot.