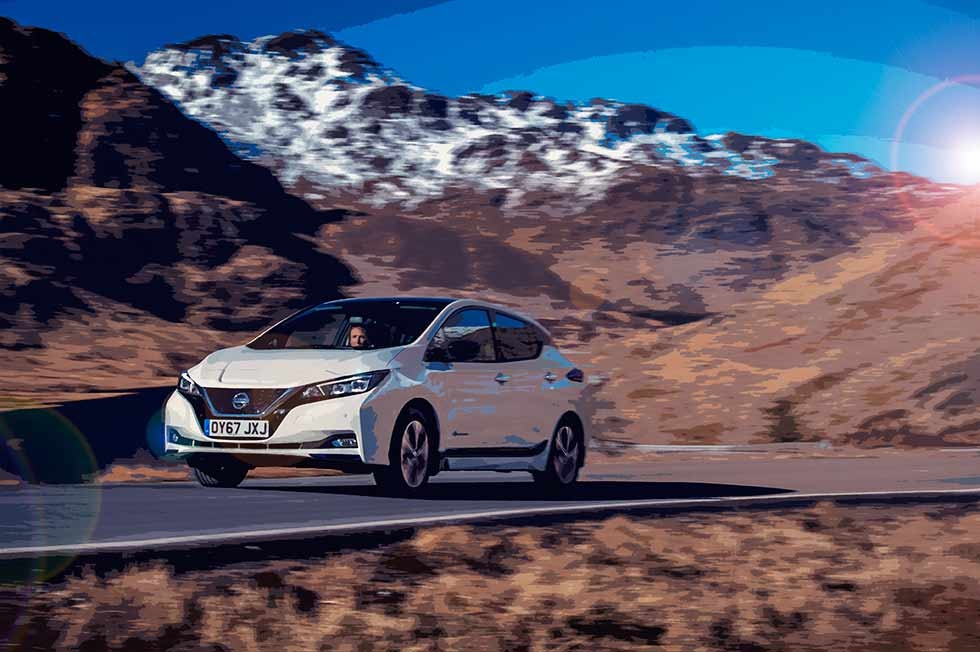 First UK drive: 2019 Nissan Leaf. Paul Beard heads to Scotland for the UK launch of the Nissan Leaf. The Nissan Leaf was an ever-popular pioneer for electric car buyers but a hotly anticipated new version promises more. Paul Beard discovers whether it lives up to the hype. Words: Paul Beard & Photos: Drive-My EN.

Scotland has been an important part of my life for almost thirty years now and for many reasons, including time spent living in the Highlands. You can imagine then my delight at being asked to spend a couple of days in the southwest of this fair land, attending the UK launch of the second generation Nissan Leaf. Loch Lomond and The Trossachs National Park is an area I hadn’t visited before and it certainly didn’t disappoint.

I boarded a small turbo-prop aircraft at Exeter airport and was soon airborne – my first experience of flying, I might add – heading towards Alba. At Glasgow Airport, I met up with the Nissan UK team and climbed aboard a shiny red Leaf, my co-pilot none other than Nissan GB’s Electric Vehicle Manager. Just before we departed, I was told that there was a challenge running, with a prize going to the driver who arrived at the overnight accommodation with the most charge left in their battery – well, a bull I certainly ain’t, but that sure was a red rag!

Having stowed my overnight bag and anorak in the cavernous boot (435 litres, unless you opt for the Bose Soundbar, which makes it a wee bit less), we set off in what can only be described as a very attractive car – most will be white but the Magnetic Red livery of my steed certainly added a little extra class; all colours suit the new Leaf, the only one I’m not keen on is the pale Spring Cloud Green but no doubt it will have its admirers. More conventional looking than the previous model, the new car should certainly have a wider appeal, which is what Nissan hopes to capitalise on.

We were soon out of the airport car park and heading through Glasgow city itself. The sat nav showed the way, although it remains relatively unchanged from the outgoing model. Wanting to win the economy prize at the end of the day, I decided to use a few of the technologies available, so the ECO button was pressed and the puck-like gear selector moved into drive for a second time thus instructing the car to offer more regenerative braking power. These two technologies are carried across from the old Leaf but the e-Pedal is brand new. At the flick of a switch in the centre console, you can drive using just the accelerator pedal. By releasing the accelerator, the car decelerates and can come to a complete stop, and without rolling backwards down a hill, with no need to press the brake pedal. With a deceleration rate of up to 0.2G, the e-Pedal eliminates the need to constantly hop between pedals to slow down or come to a stop. This helps reduce fatigue and stress in daily city driving, allowing the driver to use the brake pedal up to 90% less than in conventional cars. It doesn’t take long to become accustomed to and I found it to be fun and made for a smoother driving experience.

Leaving the city centre passed by the ubiquitous tenement blocks of the suburbs, putting us in mind of the BBC’s Still Game. The open road soon beckoned and with dual carriageway beneath the wheels, it was time to try out another new piece of tech. Pro Pilot: this is Nissan’s intelligent adaptive cruise control, available on N-Connecta spec and above, that not only maintains a safe, adjustable and adaptive distance between you and the car in front, but also keeps the car in the middle of its lane. One thing to remember here, is that if like me you have the naughty habit of driving with only one hand on the steering wheel, you will be admonished for such behaviour. If you don’t have both hands on the wheel, expect a warning; ignore the warnings and the car will bring you to a complete and safe stop – it having assumed that you have at the very least fallen asleep at the wheel, your hands no longer in control. Here then is yet another way in which this tech marvel does its best to keep you safe; don’t forget there is also Lane Departure Warning, Intelligent Lane Intervention and Rear Cross Traffic Alert along with features from entry grade include six airbags, ABS, Brake Assist (BA) and Hill Start Assist (HSA), as standard across the range. Then from Visia grade Traffic Sign Recognition and Blind Spot Warning are also standard, as well as Intelligent Emergency Braking with Pedestrian and Cyclist Recognition.

Anyway, back to the story: as you’ll recall we had left Glasgow behind and were heading west. Hills grew in stature and the roads became more twisty; it wasn’t long before a sign indicated our entering Loch Lomond and The Trossachs National Park, where the scenery changed dramatically. The sun sparkled on the blue waters of Loch Lomond and craggy mountains rose steeply, providing jaw-dropping backdrops; every time I exited a bend a new vista played out. I was reminded quite poignantly that Scotland has some of the most dramatic and beautiful scenery on the planet. If I had stopped every time I wanted to take a photograph, it would have taken forever to reach our destination.

We had been warned at the start that we would encounter potholes – well, the first few were potholes and then, when I saw Professor Iain Stewart making a documentary in one, I decided they were actually craters and that great care should be exercised. Generally, the improved suspension soaked up imperfections well and I’m glad to report that the seats are also improved over the spongy items in the old car.

Lunchtime was now approaching and we stopped in at the Cruachan hydro-electric plant, which is a 440 megawatt reversible pump-storage power station situated on the banks of Loch Awe; it’s one of only four pumped-storage facilities in Britain. After a fascinating talk by head engineer David Bowie and a very tasty lunch in their visitor centre café, it was time to set off back up the road towards the Isle of Eriska, some twentyfive miles north. The hotel that bears the name of this picturesque island was fabulous – if you ever need to get away from the stresses and strains of life, this is the place to go.

Day two would be a very different kettle of salmon but no less enjoyable, with a white top spec Tekna with all the toys to play with including heated seats, heated steering wheel and self-dimming rear view mirror. The day had dawned rainy and that’s how it continued; however, the mist and brooding clouds added a different, ethereal feel to the mountain passes and stunning lochs. We took a different route back towards Glasgow and after winding down some narrow roads and interacting with passing places and locals in muddy 4x4s, we emerged onto a proper A road, where TV supercars side by side would not have been out of place, powering down the straights and drifting through the bends. But we weren’t in petrol guzzling noisy exotica, we were getting the job done serenely. Don’t be fooled, though, into thinking that the Nissan Leaf is just another hatchback that happens to run on leccy and is, well, a bit boring. Oh no. Turn off most of the eco aids and here is a car with a fluent chassis, decent steering and plenty of poke; thanks to a low centre of gravity it feels really planted and corners flat too. Articulated lorries and coaches were dispatched with ease, when straight ribbons of tarmac allowed, gentle positioning of the throttle pedal alone sped and slowed us in and out of bends whilst lochs and mountains vied for our attention. Then, to illustrate just what a great and versatile car the new Nissan leaf is, a V6 engined Audi TT appeared ahead. He wasn’t hanging around. My Nissan Leaf had no trouble keeping up with the sports car ahead – I didn’t need to change gear or wait for a turbocharger to spool up and haul me out of bends. I had near-immediate torque and as water and rock skimmed past out of the corner of my eye, I relished the ease with which I had managed to match the petrol-powered ‘sports’ car ahead, on these roads.

Sadly all too soon we were on the last leg of the route back to Glasgow airport, but it didn’t feel like I’d just covered one hundred miles; thanks to the extra sound insulation and improved dynamics it felt more like ten and that’s one of the key enjoyments of the new Nissan Leaf – it can pootle along or chase down sports cars for the heck of it. It’s fun, practical, stylish and cheap to run. Thanks Nissan for a wonderful 36 hours. And to you, dear reader, I suggest you get down to your local Nissan dealer forthwith and snap up what is surely one of the best new cars of 2018.

CLOCKWISE FROM TOP LEFT More ergonomic revamped interior. e-Pedal provides seamless one pedal operation. Infotainment is straight from the old Leaf. Type-2 charge port. RIGHT Despite appearances, the new Leaf is a heavily revised update of the outgoing model with a shiny new suit: works for us.