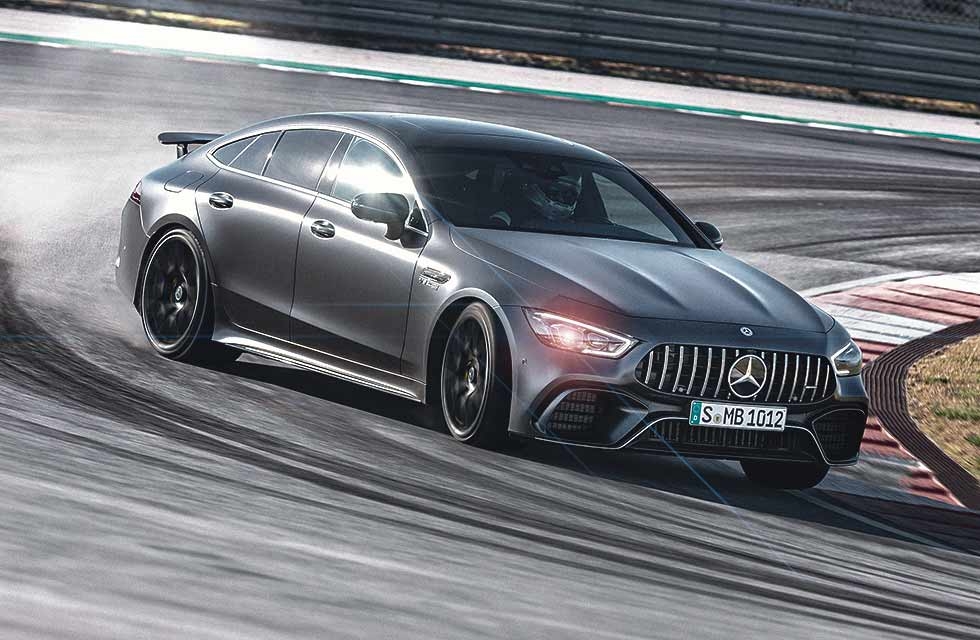 It’s a momentum car, the 2019 Mercedes-AMG GT 4-Door X290. Not in the traditional keep-it-pinned, door handle-shaving sense of something modestly motivated such as a VW Up GTI, of course. More that as your two-ton bolide hurtles towards a hairpin, you’re momentarily conscious of just how much momentum you’re carrying and, by extension, how much you’ll have to lose in order to make that corner.

The truth of the situation is a little more nuanced. You are carrying obscene amounts of speed and you do have to stand on the left-hand pedal a little sooner and for a little longer than you might in something with less meat on its bones. The difference is in the details – the sharp, ultra-positive turn-in, the distinct lack of understeer in tight corners, the agility and rock-solid stability in faster ones. It shares these traits with the car Mercedes-AMG would have you believe the GT 4-Door sits closest to in the AMG range: the AMG GT coupe.

Here, too, there are more layers to the story than appear at face value. The 4-Door is actually underpinned by a version of Mercedes’ MRA platform, as used on cars such as the E-class, not an aluminium-intensive architecture like the low-slung hot-rod.

There are a few reasons for this. One is that the GT’s front-mid-engined layout pushes its cabin right back, and the packaging required to fit four passengers in such a location would be interesting to say the least. The second is that unlike the AMG GT, the 4-Door is all-wheel drive, and the GT was never designed with that in mind. And thirdly, the GT 4-Door will be available with AMG’s new 43 and 53 in-line-six mild-hybrid drivetrains in some markets, and the more conventional platforms are already designed to accommodate these.

The visual compromise is obvious: the 4-Door’s bonnet line is nothing like as sleek nor as thrusting as that of the GT, its roofline closer to neck height than hips, and its proportions far from as dramatic. There’s a hint of Panamera to the rear quarters but the GT details are all there, from the ovoid grille to the rounded rump with its slimline tail lights. Importantly, it shares little with Mercedes’ own four-door coupe, the CLS, and while it may lack drama alongside the coupe, the 4-Door is a striking shape in isolation.

Differences under the skin are more significant. The body-in-white is steel, with aluminium front strut towers and front and rear subframes. AMG has paid particular attention to stiffening the shell, with several high-strength lateral cross-members tying the body together from underneath, and a pair of enormous diagonal members connecting the trailing edge of the sills to the boot floor. The outer skin of the boot floor itself and the rear bulkhead are both carbonfibre. Despite the lightweight materials, kerb weight clocks in at 2045kg; this is undoubtedly still a luxury car at heart.

Power comes from the 3982cc, twin-turbocharged V8 used in all 63-badged AMGs.

In S form it becomes the most powerful AMG on sale (and behind only the SL65 Black Series as AMG’s most potent model ever), producing 630bhp at 5500-6500rpm and 664lb ft of torque from 2500 to 4500rpm. Non-S models produce 577bhp and 590lb ft. All drive through an AMG Speedshift 9G nine-speed automatic transmission and an AMG 4Matic all-wheel-drive set-up. Drive to the rear wheels is permanent, with power sent towards the front pair as and when it’s needed – and as with the E63 S, 63 S versions of the GT 4-Door will let you expedite the 295-section rear tyres’ demise courtesy of a drift mode.

Dynamic Select makes a return here alongside AMG Dynamics, which actively influences how the car reacts. Drive programmes range from Slippery – which softens the V8’s delivery – through the usual Comfort, Sport, Sport+ and Individual, to Race.

That last one winds engine, transmission, steering and dampers up to their most intense settings and enables Sport Handling Mode and a fully-off option for the ESP. All GT 4-Doors come with rear-axle steering and the 63 S gets an electronically controlled locking rear differential. According to AMG chief executive Tobias Moers, the GT 63 S will lap the Nürburgring Nordschleife in 7min 30sec. Road first. Creeping through Texan traffic the GT 4-Door certainly feels closer to an E63 than it does the GT coupe. The GT’s seductive letterbox view down a classically long bonnet is absent, and the E-class-style dual screens pull rank on the broad GT centre console as the cabin’s dominant feature.

The console features the usual switchgear for dampers, exhaust and the like, but helpfully Drive Select is replicated on a rotary control on the steering wheel, with two buttons on the opposite spoke changing depending on the mode – in Sport+ you’ll get exhaust and suspension setting options, whereas Race lets you change suspension and ESP.

There really is space in the back seats, too, so it’s easy to believe AMG’s claim that the GT 4-Door can function as a family GT, and while a pair of individual seats is standard, UK buyers will also have the option of a more conventional three-seat bench.

Rough sections of concrete paving cause a resonance to echo through the shell, but otherwise the GT 4-Door is no less refined than its E-class and CLS stablemates. There’s a firm edge to the ride but it’s not inappropriate for a car of this performance, and there’s enough control and so little roll even with the dampers in Comfort that you’ll rarely feel the need to explore the firmer settings.

At the Circuit of the Americas – a daunting venue for the launch of a 630bhp car, throwing 20 turns (some blind, others off camber) at you in the space of just over 3.4 miles – the GT finally feels closer to its coupe sibling. It powers down the back straight with the kind of sustained force and thunderous noise we have always loved in this engine, and tops 150mph before the downhill braking zone into Turn 12.

The brakes are powerful and progressive, and little more than a quarter-turn of lock hooks the nose into the apex. How you exit depends on which buttons you’ve pressed beforehand, but opt for speed rather than smokescreen and the 63 S’s huge traction slingshots you through with just a hint of rotation.

Faster corners are a similar story: reassuring turn-in, plenty of grip and an amazing ability to change direction for something that crests two tons. It quickly feels natural to twist the dial on the wheel to Race and relax the stability control, with no sense that the 4-Door will bite if you do so.

An E63 offers this confidence too, but not with the same levels of precision or agility. The GT 4-Door is as expressive and involving as AMG’s other saloons, but despite its extra doors and extra weight, also offers dynamic ability very close to that of the AMG GT coupe.

Below: active aero includes multi-stage rear wing, which adopts its position according to the driving style and driver mode selected.

Above right: dual screens dominate the cabin. Right: purpose of the two buttons on the inner steering-wheel stalk changes depending on mode.