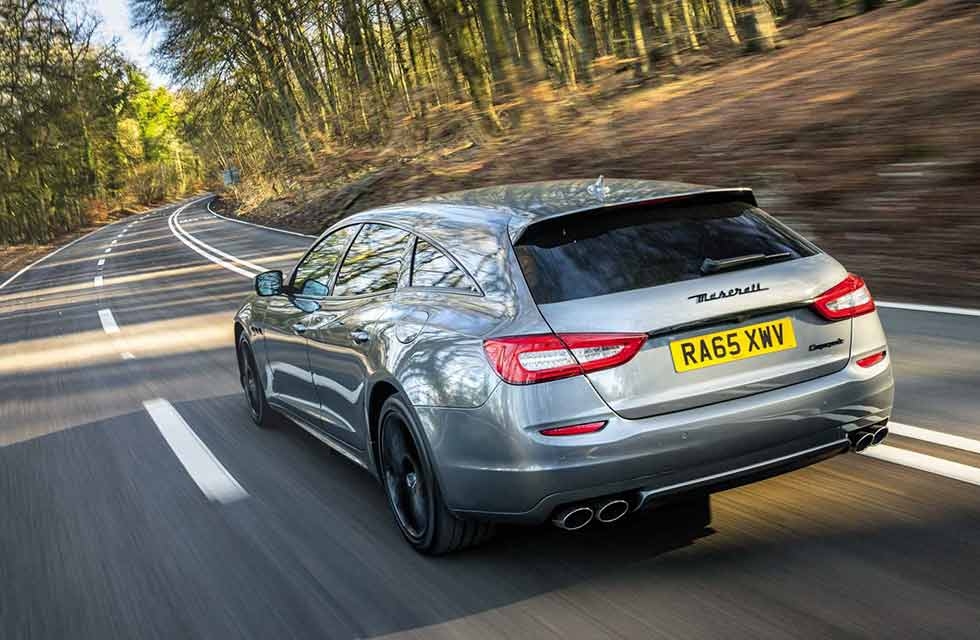 Look at the badge ‘Cinqueporte’, it says, in exactly the same script as that on the saloon version of Maseratis largest car, which denotes a door count of four, rather than five, the car you see here, though, has an extra door because it’s an estate car. You didn’t think Maserati made one of those, and you would be right. Five doors are meant to be the province of the Levante SUV.

OVERDRIVE  Ever heard of a Maserati Cinqueporte? You have now.

But here it is, the Cinqueporte, looking every centimetre a Maserati factory production. Maybe it’s a limited-run project from an Italian coachbuilder, then, here’s form here: in 2009 Carrozzeria Touring built four ‘Bellagio Fastbacks’ based on the previous-generation Quattroporte, lushly trimmed and featuring an upswept rear side window. One particular British aficionado was miffed that he missed the one that sold in 2013 for €117,600 at an RM Sotheby’s auction.

So, he thought, what I need is someone to make me another. But mine will be based on the latest Quattroporte, and will have the frugal, but still speedy, diesel V6 engine. He consulted a couple of big-name prototyping companies in the UK, but they typically wanted to charge around £200,000 and would take far too long.

Five into four equa a one-off

Then he heard about Adam Redding. He’s the bodywork magician who has rendered my pre-war Singer visually civilised, who restores E-types, Astons, Lancias, Bristols, Dinos and anything else interesting, and who rebuilt the beautiful Arnolt-Bristol I drove for Drive-My.

Adam loves a challenge. ‘Is it possible?’ asked the Quattroportes owner. ‘Of course,’ Adam replied. And so the then-white 2015 Maserati went under the metal-surgeons knife.

Now, Italian coachbuilders often have glittering reputations for style, elegance and so forth, but it can’t be denied that some of their creations over the years have been a bit, shall we say, rustic under the shiny skin. Adam and his team, however, take a pride in the bits you can’t see as well as the bits you can, so what comes out of a small workshop in Farnham Common, Bucks, can easily be as good as, and maybe technically better than, something concocted in Turin, city of carrozzerie.

So, how could Adam do the job for so much less than the big boys? ‘We felt that with our skills, and using proprietary components, it could be realistic and affordable,’ he says. Cue a lot of R&D: what might fit the QP’s curves and look just right, among the existing metalwork on other five-doors? Surreptitious measuring of the potential candidates ensued, a quick note in a supermarket car park when a likely candidate was spotted, much trawling of the net.

Meanwhile, the white QP’s rear quarters were opened up and much of the roof removed. Strips of steel were laid to show how the cantrails might continue rearwards, what shape the rear side windows might be. An upward sweep, like the Bellagio? Or a slender glass, tapering down to the tail while accommodating the haunch above the rear wheels?

Adam mocked up the styles on a computer, too, and after much discussion the owner went for the style you see here. If you think those rear windows – the sixth shape Adam tried – have a hint of Mercedes-Benz CLS about them, you wouldn’t be far wrong.

With the glass decided, the metalwork could be shaped to fit. Several tailgates were tried; their inner and upper sections needed to fit because the lower outer section from tail-lights to bumper would be a section of the Quattroportes bootlid. Re car that provided the tailgate, its closing panel and surround, and much of the inner rear quarter pillars, also donated its roof; the resulting shutline showed uncanny matching between the panels. Re roof section was spliced into the Italian original two inches forward of the sunroof’s rear edge.

So, which cars gave up their body parts? Adam made me promise not to say. He and his metal-men created new outer cantrails, the section between lights and glass for the tailgate, new upper sections of rear wing and new outer rear pillars. Inside, it was decided to keep the rear shelf structure for the stiffness it gives (the Bellagio had instead a separate cross-brace further up the C-pillars), but the rear seats’ already-present folding ability means that this is still a useful load- carrier. Re rear suspension towers, originally spot-welded, are now seam-welded for extra strength.

Re boot floor is QP, the boot area’s side trims and the lift-up rear shelf extension were modified from the tailgate donor. All has been retrimmed to match, and a new headlining created from the same material as the original.

Re hardest part of all was the electrics. Adam ordered a kit to power the motorised tailgate from a Chinese company that supplies OE manufacturers. ‘Rere are eight multiplugs for the tailgate alone,’ says Adam, who admits he underestimated the scale of the problem. His electronics-genius mate Micky, from diagnostics specialist Autologic, got car and tailgate talking to each other, but resetting the airbag light had to be done by a Maserati dealer.

Adam reckons the Cinqueporte took 1500 hours to create. Now that he knows how to do it, and has had the rear panels 3D-scanned by Daran Peters at Mistral Models to make a mould for soft tooling, he says the next one should take about 1000 hours.

So, what do we think? Bar a couple of tiny details of trim and glass interfacing, for which Adam has a fix, this could be a factory production in both how it’s styled and how it’s finished. Re tailgate fits and works perfectly, its shape blending exactly. To drive, it’s exactly like the saloon, with just a more distant image of the rear window in the mirror to remind you of your car’s uniqueness.

It’s an expensive way to acquire a luxuriously sporting estate car, yes. But even if Adam does make a few more, you’ll be unlikely to see another as you cruise across Europe, labrador gazing out of the rear window.

Below and bottom: Thought you’d never seen one of these before? You’d be right: Maserati Cinqueporte looks factory, but isn’t.